a little holly plant growing on the windowsill

I finished a draft of that big survey paper that's been eating me alive for the past several months. Now it's all in my advisor's hands until she takes the time to make edits to it. It's nice to be done with a big task that does not help me graduate.

The other local PhD student is no longer doing research in our group, which is more than okay with me. He did not really understand things well, but also didn't ask questions or really talk to me at all, so delegating tasks to him never went well. Oddly enough, I think his intolerant views towards trans people led to him feeling uncomfortable in the lab, but, y'know, that's not really my problem to fix.

Next up I need to start getting my ducks in a row for my comprehensive exam.

Today the truck goes in to the shop for front brakes and wheel bearings and I'm...anxious about it? I should have been socialized different as a kid, maybe, because I have always developed emotional attachments to the machines in my life. Not sure what to make of that.

Sunday is our 9th anniversary. We are such different people now than we were when we got married, but we've grown together and it sure seems like we're going to keep that up. I think we are going to do something sexy like tidying and organizing a couple of rooms in the house so my wife has a desk to work at and the basement becomes less my space and more our space. And cook some good food together.

As someone who owns an F-150 of the same era with the same 300 c.i. inline six engine, I can attest to how terrifyingly deadly it is to deer and presumably pedestrians as well. It's already big and I struggle to imagine what it's like to drive something even bigger on a regular basis for typical consumer car tasks. Honestly I would love a tiny Hilux but they command ridiculous money in this area because they're popular for rock crawler/off-road builds.

Some auto company should follow Subaru's footsteps and make a small truck marketed at dykes. Ted Cruz might want a mean, threatening, monstrous truck, but lesbians know you don't need a big truck to be good in the bedroom :)

"Why do tomatoes split" feels like a very Missouri question. Surprise week-long summer rains can really do in those almost-ripe tomatoes that were used to dry & hot conditions.

Couple weeks back, one of the local titmice ran into our window and spent about an hour resting on our porch before flying off into the trees. I love these lil friends; they're always up to some kind of antics: chasing each other around or hanging on my windowscreen and watching me through the window. 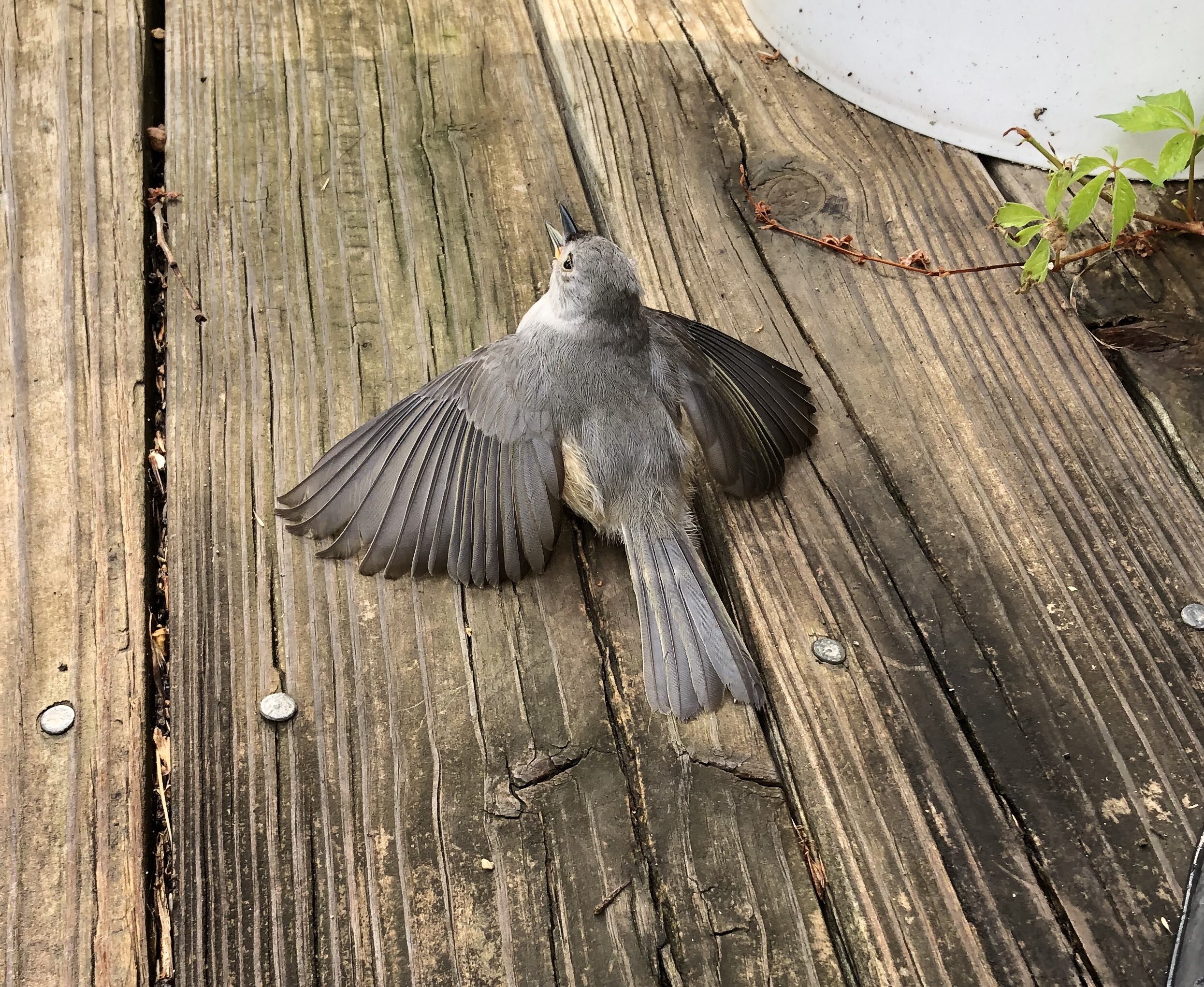 I have all the pictures for truck drum brakes, but I have yet to do the writeup. Since she's a 4x4 truck, the front brakes are extremely non-trivial and since the wheel bearings are due for replacement anyway I am going to get a local shop to do both. Book time is 3 hours so I am feeling like not doing it myself was perhaps a good choice; plus, when something rusted breaks it's not my problem! It still feels weird that we actually have enough money to afford hiring a shop to do it.

Spent last night digging around in the dashboard of my metamour's car and hopefully rehabbed a couple of servo drives that were "getting lost" due to a weak internal connection. They're part of the AC system, so not a big deal if they fail again, but hopefully that saved about $350 in parts.

I'm getting very close to being done with my part of a big paper and I'm quite excited to pick up my research again.

The “Harbinger Customers” Who Buy Unpopular Products & Back Losing Politicians
goobster4
user-inactivated
kottke.org  ·  #thehumancondition  ·  #society
Should Plants and Animals That Relocate Because of Climate Change Be Considered Invasive? (Really good article, gives brief views on multiple positions)
buteos1
buteos
smithsonianmag.com  ·  #climate  ·  #biology
393rd Weekly "Share Some Music You've Been Into Lately"
goobster31
rezzeJ  ·    ·
text  ·  #weeklymusicthread  ·  #music
Trump just told us how mail delays could help him corrupt the election
am_Unition2
ilex
washingtonpost.com  ·  #seriousseason  ·  #whiterabbit
Big-Money Investors Gear Up For A Trillion-Dollar Bet On Farmland
kleinbl003
buteos
npr.org  ·  #economics  ·  #agriculture
The Intrepid Mother and Son Who Unraveled The Moose Boulder Hoax
0
ilex
atlasobscura.com  ·  #geography  ·  #maps
BFV - Weekly music thread -- Thank you (ASK HUBSKI)
rezzeJ10
thenewgreen
hubski.com  ·  #weeklymusicthread  ·  #askhubski
"a staggering surge in homelessness unlike anything we have seen”
buteos6
kleinbl00
reuters.com  ·  #covid19  ·  #housing
Climbing One of the "50 Classic Climbs of North America"
am_Unition5
ButterflyEffect  ·
wikipedia.org  ·  #tripreport  ·  #tellhubski
Why Houston's Apartment Evictions are Mounting
kleinbl003
kleinbl00
wsj.com  ·  #covid19  ·  #realestate
I'm genuinely depressed. I think my job is killing my spirit, who I am as a person. It has been for years and I'm running out of hope.
bhrgunatha4
buteos
text  ·  #ramblings  ·  #employment
ASK HUBSKI: Have any of you or someone close to you had COVID-19?
ButterflyEffect20
thenewgreen
text  ·  #askhubski  ·  #covid19
ilex  ·  18 days ago  ·  link  ·    ·  parent  ·  post: The Death Penalty Can Ensure ‘Justice Is Being Done’

If people object to the death sentence "on moral, religious and policy grounds", it seems like an incredible leap to argue that such executions are just. One need look no further than the BLM protests to observe that "legal" and "just" are two wholly different things.

Something that I don't really care for about this particular style of discourse is that, fundamentally, it's a lot of words in defense of a somewhat milquetoast idea. Paul clearly feels like this point needs a solid defense. While I can imagine people who'd disagree with the general principle he's arguing for, it's not all that controversial.

Paul was clearly thinking of something when he wrote this, as he felt it timely and worthy of defense, but it's not clear what. It'd engender a lot more interesting discussion were he to discuss some concrete examples, as then we could talk more about whether the principle here fits the situations he has in mind.

Two people might agree that being helplessly addicted to drugs, but one could be thinking of harsh sentencing and three strikes laws for drug dealers and the other could be thinking of taxpayer-funded rehab programs. It's a fine general principle, but the social outcomes of the specific implementations of it are vastly different, and therein lies some interesting discussion that's denied by speaking in general terms.

When measuring conformism, of course, you have to say with respect to what, and this changes as kids get older. For younger kids it's the rules set by adults. But as kids get older, the source of rules becomes their peers. So a pack of teenagers who all flout school rules in the same way are not independent-minded; rather the opposite.

Since one's quadrant depends more on one's personality than the nature of the rules, most people would occupy the same quadrant even if they'd grown up in a quite different society.

I think these statements contradict each other. On the one hand, the source of rules to which you are conformist or independent depend on your peers — your social context, if I may — and on the other, your "conformist—independent identity" is somehow independent of that society? Unless the claim is more that people sort themselves into social circles based on their alignment. But in that case, the customs protecting free inquiry haven't been weakened; Paul Graham has just accidentally sorted himself into a conventionally-minded circle.

Instead, I'd claim that one's alignment on this chart can vary significantly based on their social context. I find that I've shifted from "passively independent" to "actively independent" towards my parents as I've matured and become independent from them. In my research lab, I am pretty comfortable staking strong opinions and disagreeing with my advisor on technical issues, but when the topic is about what I need to do and when I need to do it by, I am much quieter as I'm her student and she holds that power over me.

Since Paul left the exact social context he's thinking in vague, I can't really say a lot more about what he's thinking about. I will say that the situation at universities is complex; administration has taken a lot of power from faculty, but perhaps those faculty have been hoisted by the petard of their independence, which makes cooperation difficult at times and prevents them from using their power effectively. (Leaving aside the possibility that PG is instead discussing the situation of assholes being allowed to be assholes, as nobody ought to defend that position.)