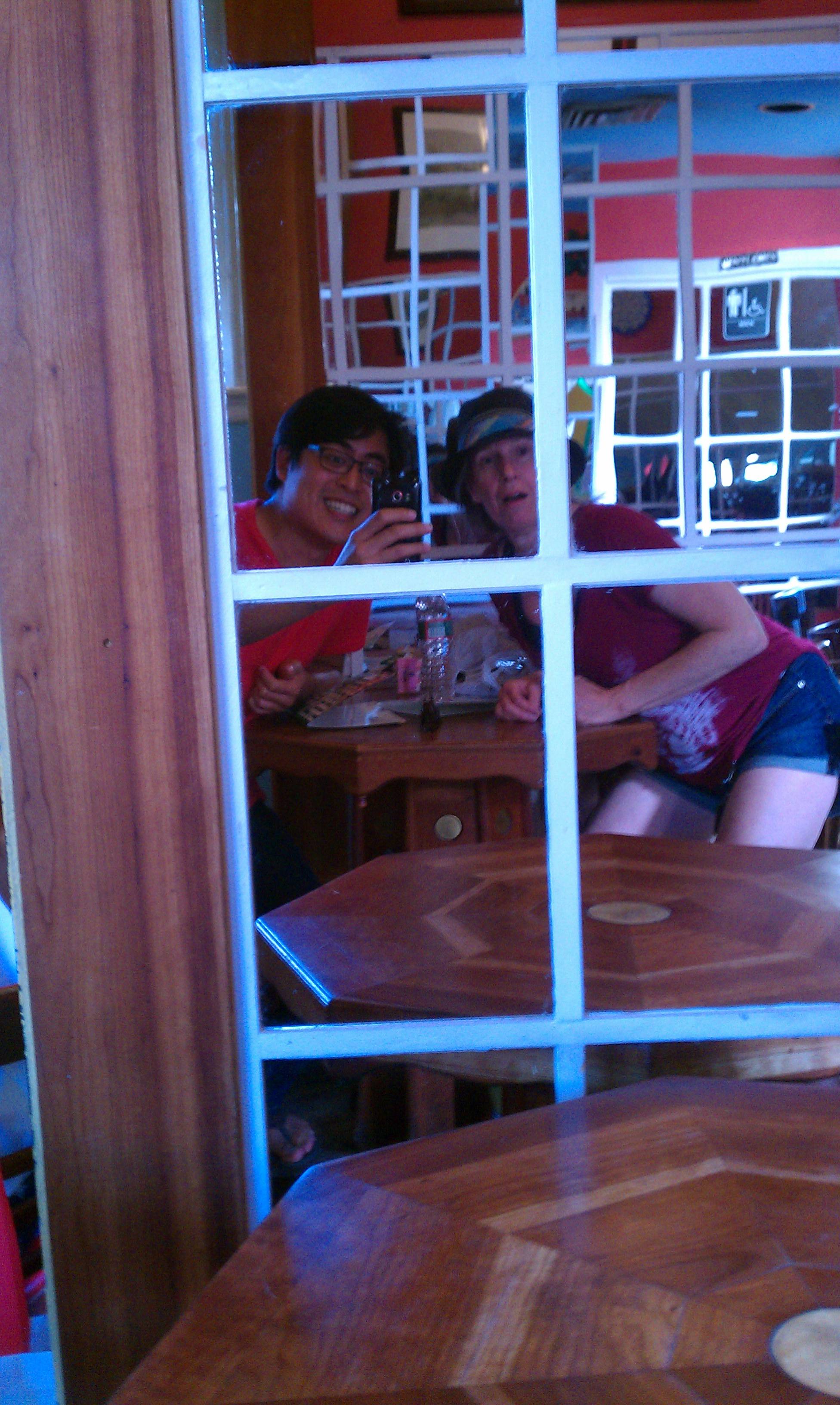 Me and humanodon in Boston! 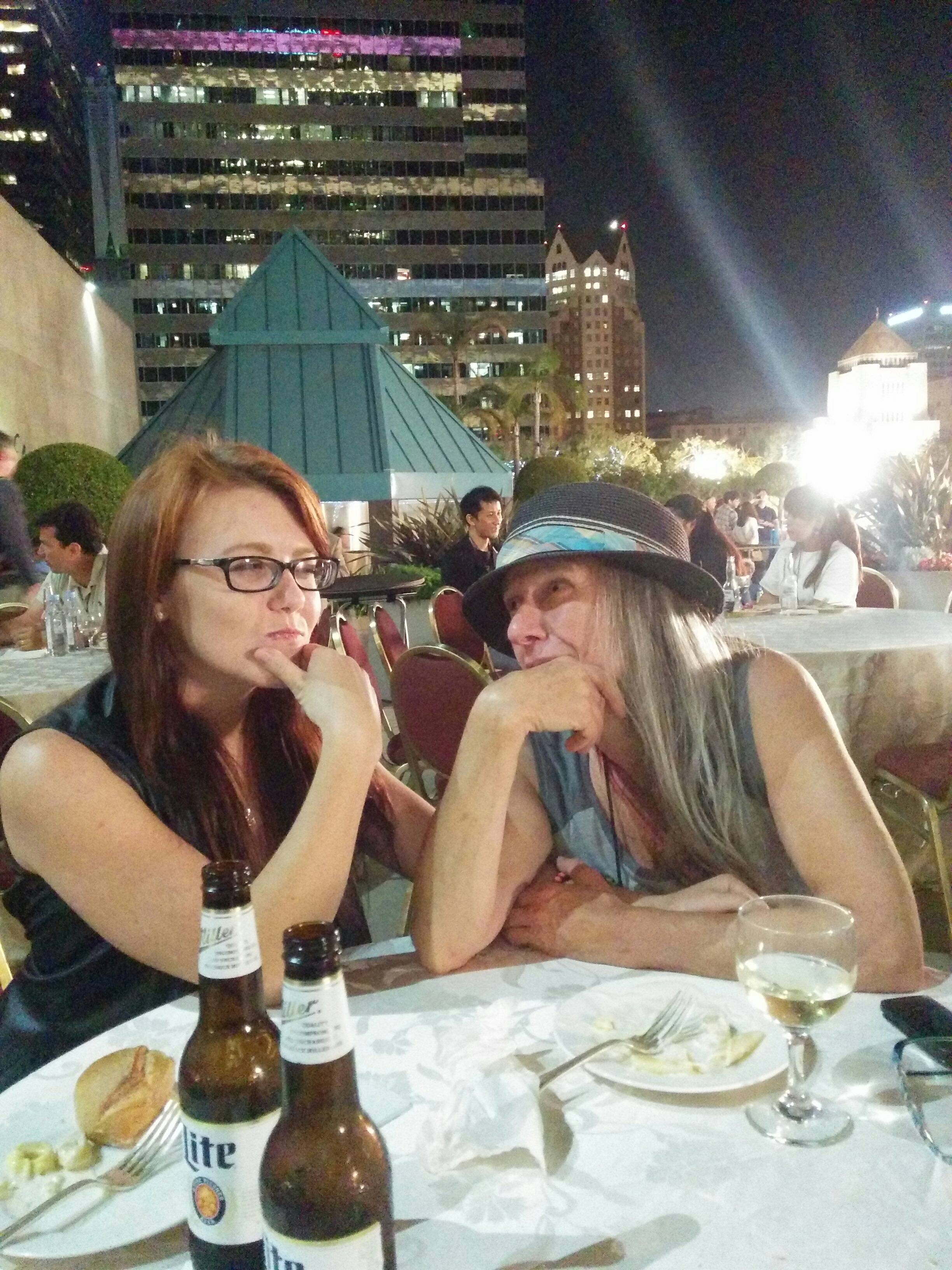 Me and insomniasexx in LA! 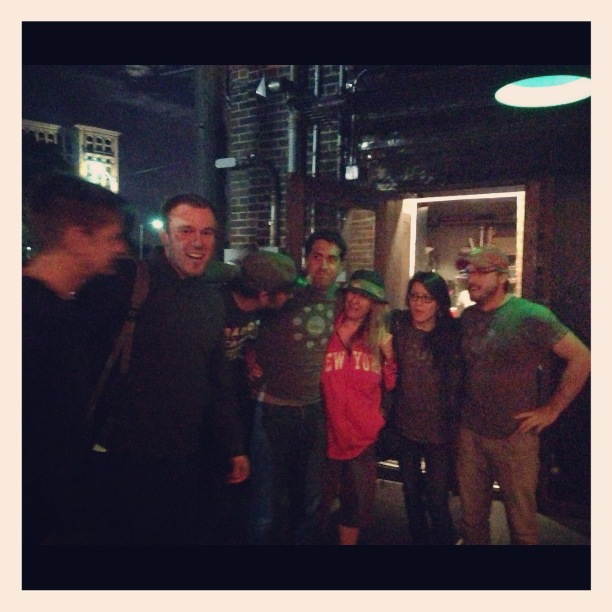 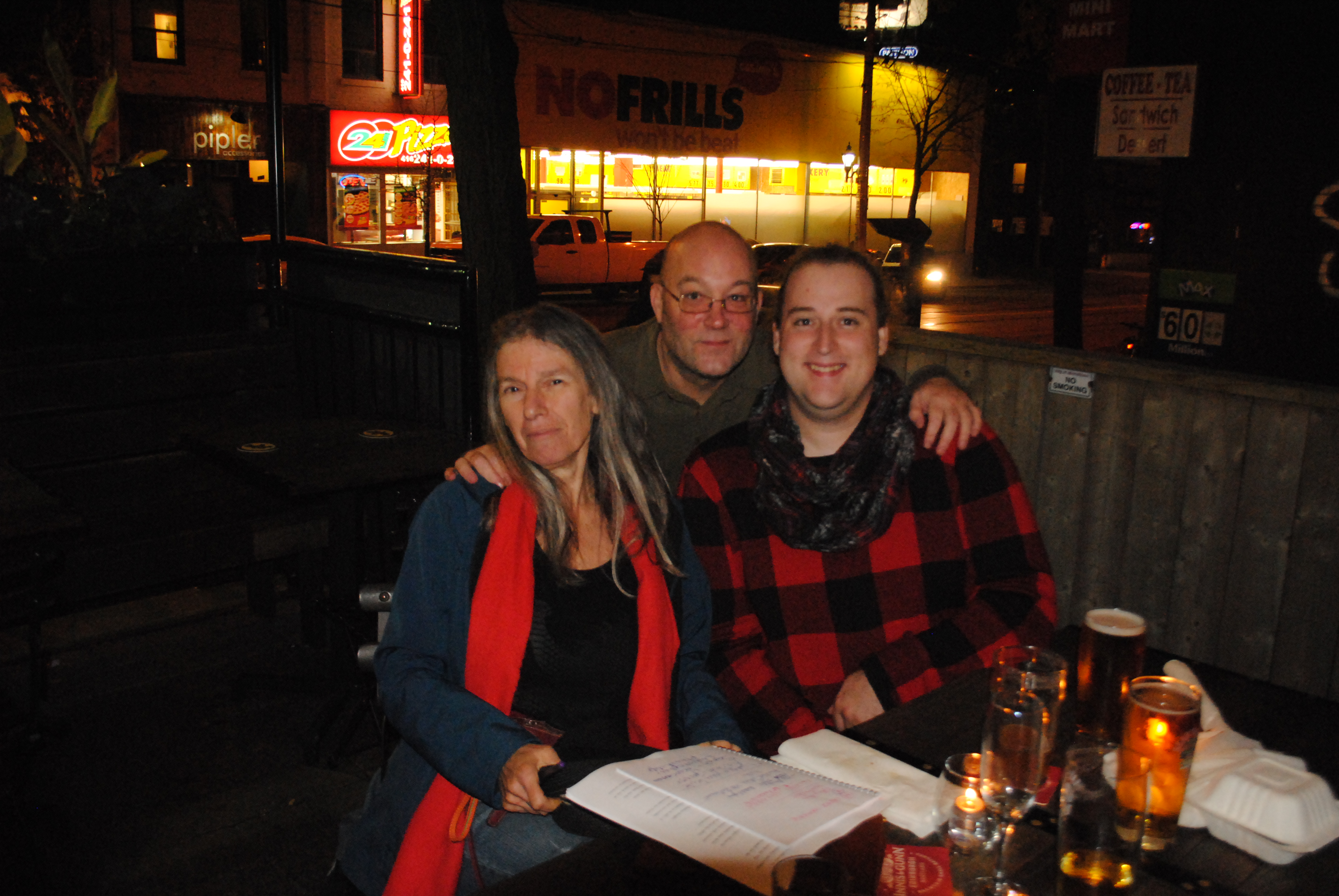 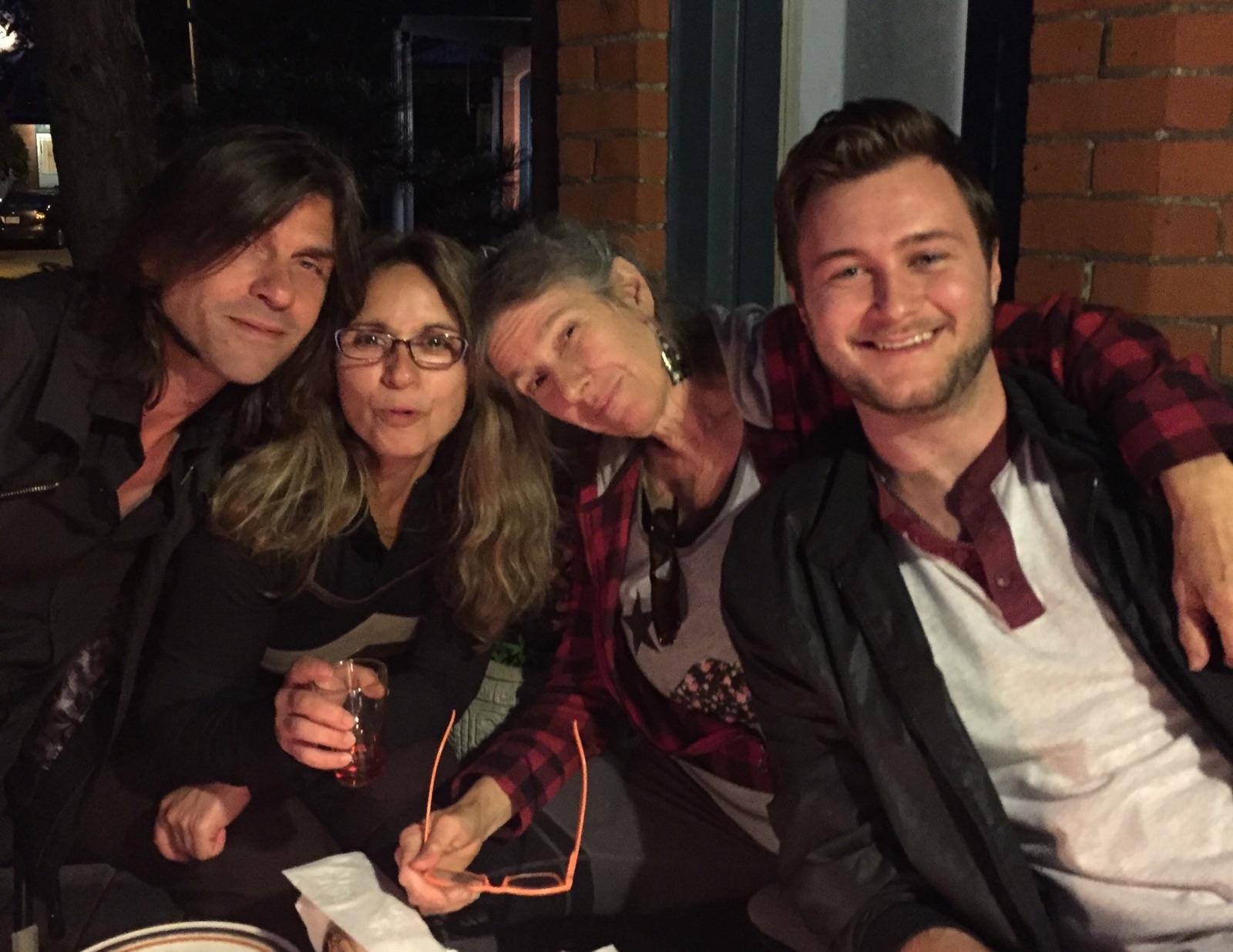 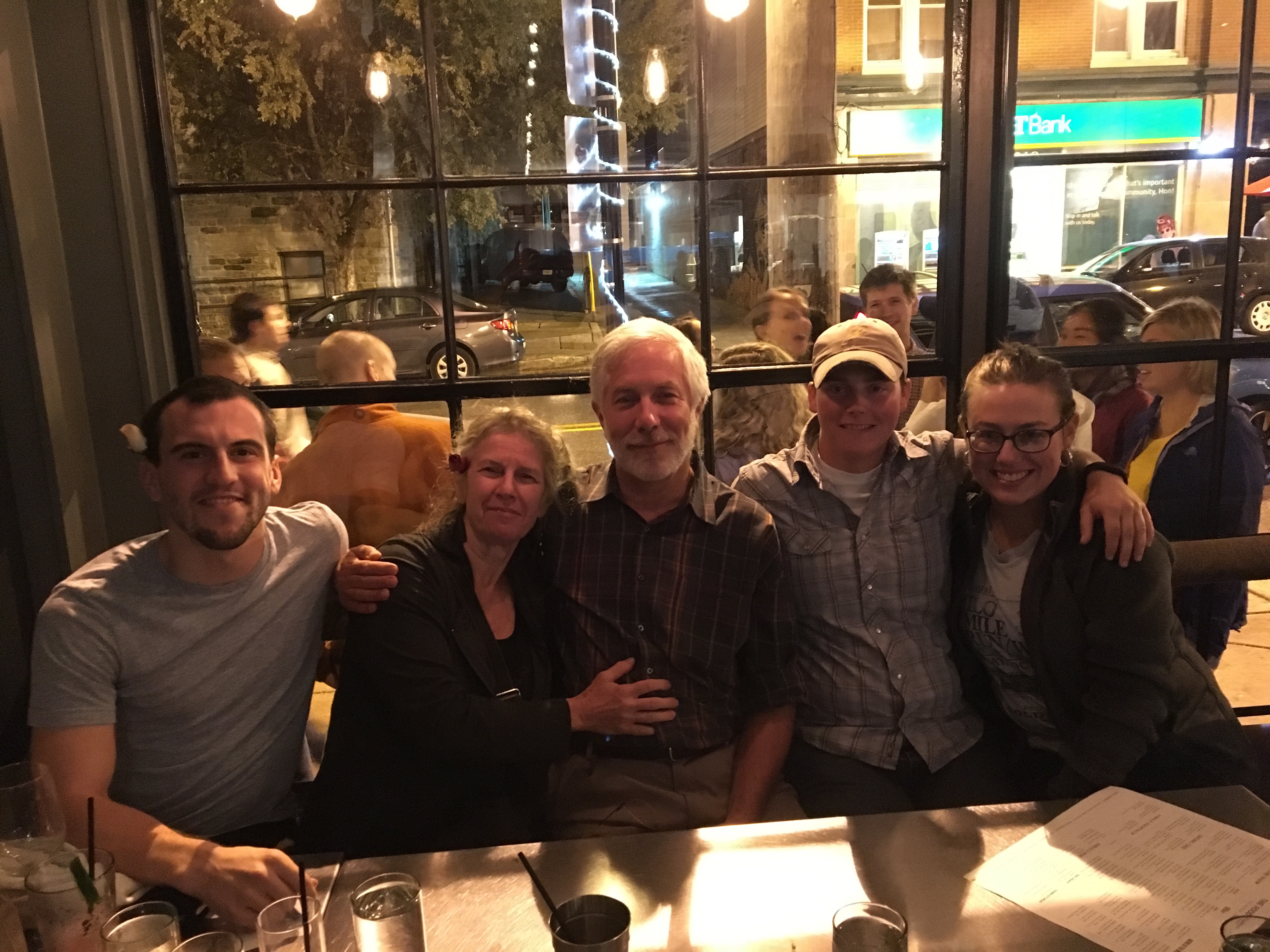 And since you asked, I came across Hubski while searching for the Higgs-Boson.

Intriguing. Suggestive. I see the music accompanying a video of a lonely figure walking down snow-covered, cold empty streets of a small town in Michigan. He is looking in café windows, icicles are hanging from roof edges. He’s carrying a long beat-up sports bag that he probably found in a dumpster.

At the edge of town, there’s a park where snow has been cleared, just by local kids and neighbours, and the area flooded to form a small ice rink.

The lonely guy sits on a bench and unzips the bag. He takes out some skates, kicks off his boots, and puts the skates on.

Then he takes an old hockey stick out of the bag. It’s so old that black tape is wound around the bottom.

He gets up off the bench. Looking around on the ground, he sees a pine cone. He hits it on to the ice.

The last scene shows the guy holding his stick above his head, spinning on the ice, smiling.

I just made a detailed analysis of these lyrics, then refreshed the page to hear the song again and all my notes disappeared . . . arrrgh

Maybe I'd better just ask you what it's about.

The music is compelling!

The basic message though is that she's unhappy. She needs poetry, but the car won't start and there's nowhere to go. She's leaving anyway, packed everyone off to foreign lands . . . but it won't change anything. As Faulkner said, "The past is never dead. It's not even past."

Bottom Line: Even a frigid wasteland is beautiful and full of the poetry we bring to it.

Explore yourself, explore others, explore your interest, explore your surroundings. Explore as much as you can because you probably won't have as much freedom again. If you think you're going to regret not doing something, do it. That's something that took me a while to come to terms with and agree with.

It sounds like you still agree with your then self.

Had a great chat with _refugee_, elizabeth, and c_hawkthorne last week. Topics included when is gossip gossip and when is it information sharing.

Gossip might negatively change the attitude of the listener towards the person under discussion.

Information sharing might possibly help the speaker change or understand their own attitude towards the person under discussion.

I look forward to more Hubski Zoom. Jitsi, actually. Many of you are probably sitting at your computers work-zooming, or school-zooming, or family-zooming. I barely turn on my computer, so it can be amusing.

Sounds great -- I'm leaving computer now but back a little after 8. See you then. Is there a topic?

You can see my lockdown strategies.

No seriously, please, someone come up with a topic.

wow, you got the house!

I just realized that SoundCloud keep playing in background on my phone, so I can listen and write this.

Do you have any ideas for lyrics? Does Atticus?

The music sounds to me like it could be about restless travelling, moving down a highway towards an unknown future (as we all are). Then I hear possibility, detours, questions, searching.

Then some determination, strength, hope.

Surely you weren't alone, were you?

Sounds fabulous to be out there, and terrifying.

Congratulations for your willingness to let go of what is in order to unite with an unknown and unknowable future. Bravo!

you're clearly motivated by intimidation where empathy and understanding don't work

That is so disappointing.

If you had to hire another one to do her job, what interview questions or questions to her references could help you screen for that bullshit? Is there any way to screen for bad team players. (I know of two companies that make employees read The Five Dysfunctions of a Team -- I don't know if they test them after.

Situation #3 is worrisome. I hope you test out okay.

Yes, wisdom in everywhere for sure, in a wishing well, in a frog, in a fly.

Especially if being in the ever-present moment is enough, except for when an army of well-armed frogs want all the flies.

Or when the flies rise up en mass and smother the frogs.

Some of the thoughts on my mind, rene, -- but I do love your poem.

Thanks for this. More shortly.

I’ll pop in just after 8. steve or _refugee_ can text me if I don’t immatrialize.

This is not a live cam. The videos are submitted and uploaded.

There's a melancholy feeling about this. Maybe classic rock is melancholy. "The Low Spark of High-Healed Boys" (1971) comes to mind

Don't worry too much

it'll happen to you

We were children once, playing with toys

And the thing that you're hearing is only the sound

Of the low spark of high-heeled boys

I immediately wanted an Eskimo pie, even though they just changed their name to Edy's Pie.

The cinnamon sky and shooting make me think of war -- even though the merchant marines are not a military force. And why do I have to tell your mother anything if you make it back -- that's a nice reversal of the usual, "if I don't make it back."

Time to get my stick and play some hockey.

I wish WindowSwap had dates showing when the video was shot.