Thank you very much! I shared a personal problem, it wouldn't be OK with you if I didn't follow up. At least that's what I think which, admittedly, isn't saying much.

Also, I don't know what happened, but that's one amazing, ego-boosting bugski. :D

Here, the problem comes from a deformable body that changes the area where it touches the container in the centrifuge. The skin of the grape is crucial and pretty tricky, too; responsible for tensile strength and elasticity tensor, but having no appreciable depth. Waaaaay too complex model for this kind of problem, but I like the challange. I'm also curious how far I can take it before it'll force me to drop analytical formulae in favour of numerical approximations.

Deciding to share my results isn't going to be hard, but there's a question what could be learned from a failure in this case. We have quite a few physicists around here, so I think 'when' is the real queston. :)

My pleasure to share it. Stay strong and take care of yourself man!

It's been a week since my procedure, and I already noticed an improvement: I don't get dizzy when I stand up.

I recently recalled this:

and in the prolonged absence of mk's data (sorry if this sounds like I'm passing blame, it's not that; I know everyone's busy and dealing with lots of things), started working on an explanation. It's a surprisingly tricky problem on both classical mechanics and the theory of elasticity, at least to someone who usually deals with electrons doing their thing. I don't yet know if/when it'll be ready to share with you, but I'm having heaps of fun and, oddly, get a lot of satisfaction from designing my own experiment to measure both mechanical properties of grapes and test their limits without a centrifuge.

Hi, y'all. I'm at the cardiological ward, the procedure wasn't exactly smooth, but so far the only complication is a splitting post-anaesthesia headache that I've been nursing since around 14:00. Despite just lying pretty much since admission, I feel exhausted. Anyway, success remains to be seen over time, and the doctor decided to keep me here till Friday. Apart from those, I'm feeling perfectly fine. am_Unition (gonna respond to PM tomorrow, thank you though! :D).

Don't have much else to talk about, though I'm glad for six weeks off work. Still plan on doing research, just won't bother with all the bullshit semi-admin emails people forward to me for god knows what reason. Gonna read a bunch, maybe finally write a book review of my own.

Thanks! I sure hope to bring good news afterwards.

I wonder if you'd fare considerably worse here in the 'states

Oh, please. I'd be giga-fucked regardless of covid.

Looks like I'm first? Give me dry Martini with a straw, extra silly.

My cardiac ablation is next week, and recovery should take about six weeks. Ideally, I'll be under observation for one or two days and released home to recuperate. It's also when cardiologist will give me the final details about weaning off some of the meds. Pretty stoked about that. am_Unition - shout-out, as promised.

It's been two weeks of on-and-off storms, nine severe weather warnings, and humidity sometimes isn't above 80%. Parts of the country went from hydrological drought to high risk of flooding almost overnight. I've been caught in a storm that transformed streets into streams and saw lots of scud clouds dragging low to the ground while taking shelter at a bus stop. The whole thing passed overhead in twenty minutes.

Speaking of which, I seminar'd on computational physics with my peers at the meteorological institute, and they told me afterwards we might have a tornado hotspot developing in southern Poland. There's a lowering between the Carpathians and Sudety mountain ranges, which makes it easier for storms to move northward while adjacent elevation makes leeward masses of air rotate. Since CAPE seldom exceeds 2000-2500 J/kg, any helicity is unwelcome news (the non-exact intuition is that it's easier to spin-up small than a massive storm). Mechanism-wise, it's pretty similar to one going on in eastern Colorado: 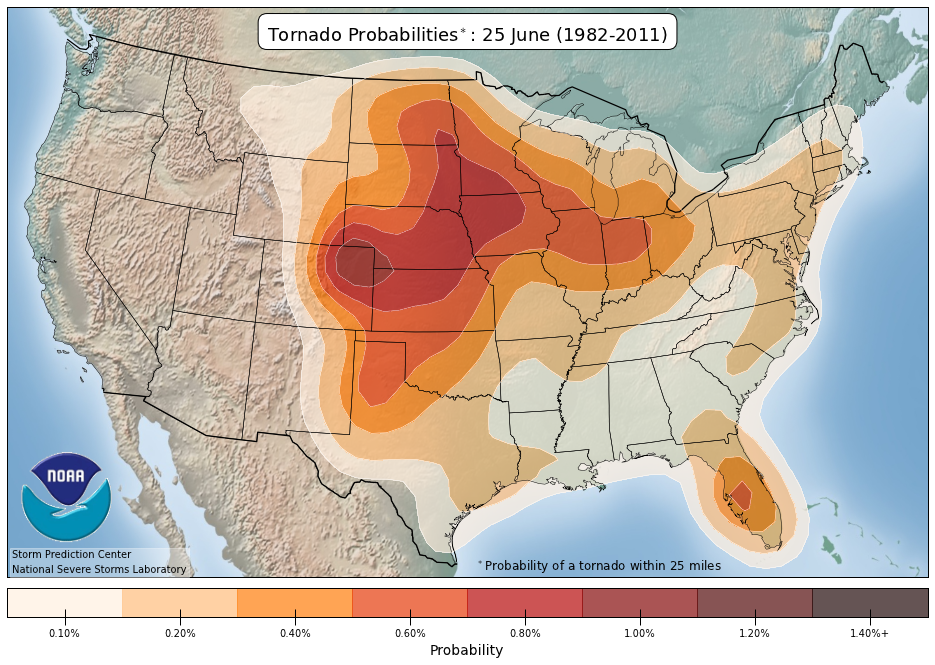 The phenomenon isn't new, but it's likely to get worse around here. Frankly, I'm not too worried about tornadoes and such. It's the flooding, which we're notoriously incapable of handling, that concerns me.

We have presidential elections this Sunday, and I hope it'll finally begin the process of taking the rule away from PiS. Rafał Trzaskowski seemed like the best candidate for the last few years, and it's a pretty close call in the polls. (EDIT: Whoops, made a typo in his name)

I've got the green light from the chemistry department to do my degree on reduced semester quota, which roughly means the senior year will take me four real-time semesters. In autumn, I will only be taking one course, though it's a big one: inorganic chemistry - 6 straight hours of lab and 2 hours of lecture/instruction per week. Do I need that? Not the paper, but my work can absolutely benefit from going through this stuff thoroughly, having instructors and other students around helps a heap. Also, in my neck of the woods, the line between chemistry and physics is sometimes nonexistent, at least unless you feel like being an obnoxious pedant, so there's that. Plus I'd lie if I said it's not fun.

I went back to reading some books from the high school canon. Unsurprisingly, The Trilogy turned out to be a lot more enjoyable if you don't have to rush through 700 pages of archaic Polish prose per volume per week because a frustrated teacher screeched so. There's a lot to appreciate I missed earlier, and it was honestly a joy to revisit. Translations exist, but that's about all I can say for them. Parts I read at random seemed dry and a tad too literal, though IMO that's still better than if the translator decided to make it all 'ye olde' for the hell of it.

What'd you recommend from your country's canon?

From what I recall, Phoenicians (whose capital fell in 332 BC and their civilisation stretched back to 2500 BC) navigating Mediterranean and Atlantic used the sun, Polaris (yes, our North Star), and the entire Ursa Minor (Little Dipper) constellation in conjunction with landmarks to navigate both at night and during the day. I added the dates to give a reference to the circle in my above post: Polaris wasn't exactly their North Star, but it was both visible and, mostly, good enough.

During the last night-time orientation run, between thick forest and cloudy weather, couldn't even see the moon most of the time. I used the memory of "where the dirt has more calcite stones" or "how this mountain's silhouette would look if I was at <place I knew like the back of my hand>" or even "the air is very moist, I'm walking windward". You don't need exact reference points, just orientate well enough to get the gist where you are and which direction roughly points to your destination. Anything will do. North Star is convenient, but isn't much on its own.

Looks like something changed in earth's alignment so that the North Star now appears brighter?

It's axial precession. Currently we're on Polaris, 5000 years ago it was Thuban.

If you won't respond to reasurring overuse of your name, he'll move to negging.

Edit your name out.

Straight, direct line segments marking the shortest distance between two points are a must for Euclidean metric. Strictly speaking, even Taxicab geometry is non-Euclidean.

Odder is right about both commonality of non-Euclidean geometry and 2D<->3D projection. Projecting sphere onto a plane isn't isometric -- doesn't conserve the distances (and areas) translated between geometries. Stating it and doing some arrow maths should be enough to prove the transform itself is non-Euclidean.