My Pulse-ox is only down from 99 to 97-99. Is this just the error rate of these things or actually valid?

Haven't checked my blood pressure yet.

Interesting, I am observing something similar.

The clinic here has a program for people with covid thagasks them to track their symptoms 3 times a day. They send you a thermometer and a heart rate and blood oxygen device.

While sick, my heart rate was always between 70 and 80. When the symptoms became weaker, I suddenly dropped back to 55-60.

I think I am going to continue measuring

I was talking with a friend about books we read in our young adult times that had an impact and found out that we shared one "wake-up" moment. We both read The Windsinger when we were young. I remember it being very different from what I have read before. I was angry while reading it. Not because it was a bad book, but because it was the first time I got confronted with a political/social system that was unfair to the people living in it and it had parallels with the system I/we lived in.

I remember it being the trigger for me to get involved in politics early on and joining the political part of the communist youth movement in Israel.

We also found out that it was only the first book of a trilogy! Yesterday, this friend showed up and dropped the trilogy at my doorstep (still in Quarantine). Soיף that's what I am reading the next few days!

Thanks! Luckily my Grandma seems to be improving. So that is that.

Just ordered some. How much do I need to take?

Quite a wild week.

First, I am done with my PhD. The defense went well. Different than I expected and quite tough, but the examiners were happy. The worst was my boss telling me that "we would have given you a summa cum laude, but you didn't publish yet". And the reason I didn't publish yet, is him. Then he wanted to give a short speech and decided to tell the anecdote that my previous PIs gave him contradictory recommendations about me. My Masters' supervisor was very positive while the guy that supervised my first PhD attempt (where I left after 3 months) told him that he should "not touch me". But you know, he gave me a "chance" and he is happy about it... And then went on to talk about our "conflicts" (which were quite few in 6 years in the lab). I was like.... I worked here for 6 years, and that is what you come up with? fuck you. Anyway. there was cake, and arabic food, and non-alcoholic drinks (so my father doesn't freak out) and all was well :)

Here is me, mid-incantation. I have a tie-dyed labcoat I wear to festivals (so people know where to get their drug infos and testing). My lab made me a new one to add to the collection :) 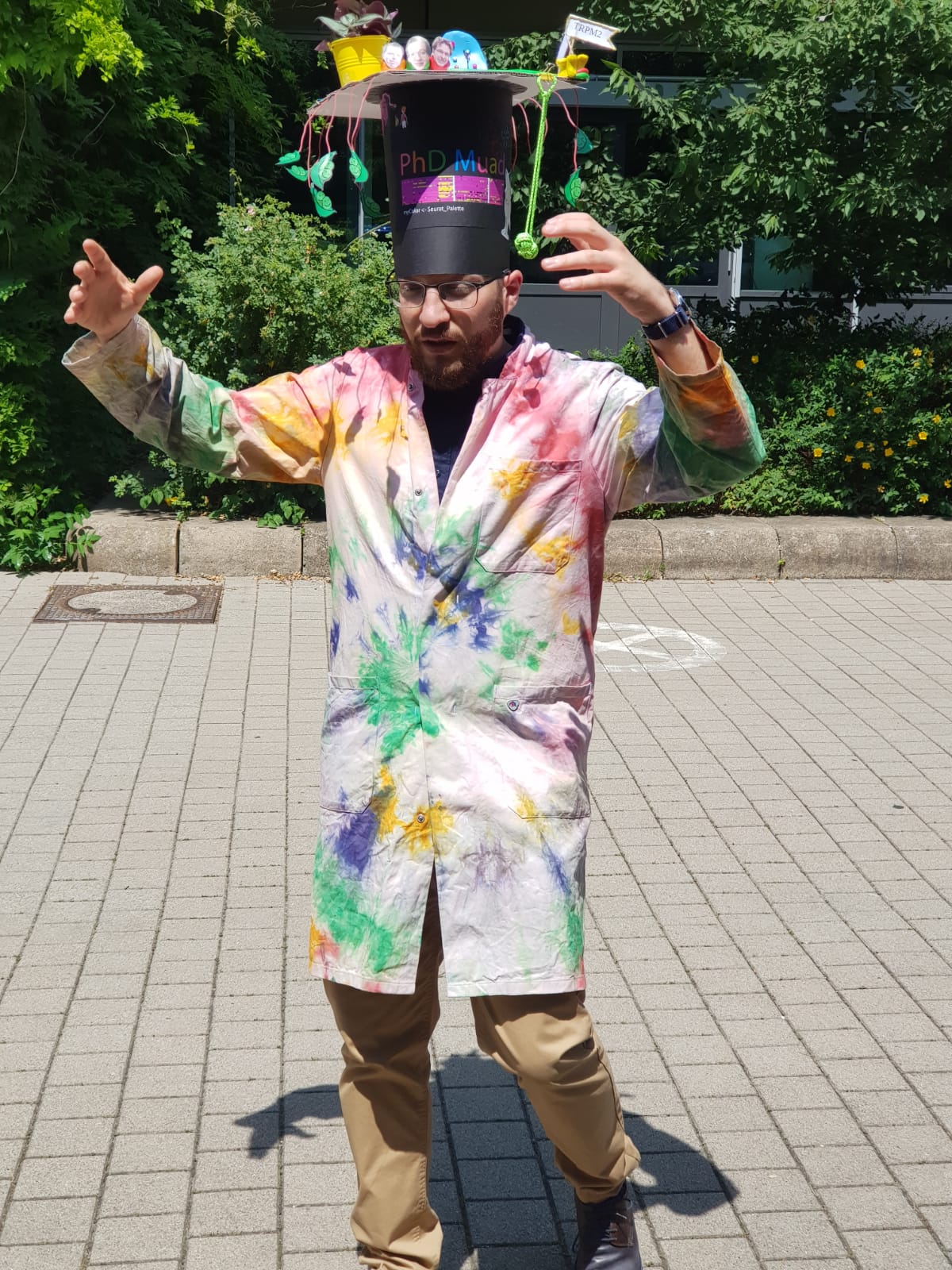 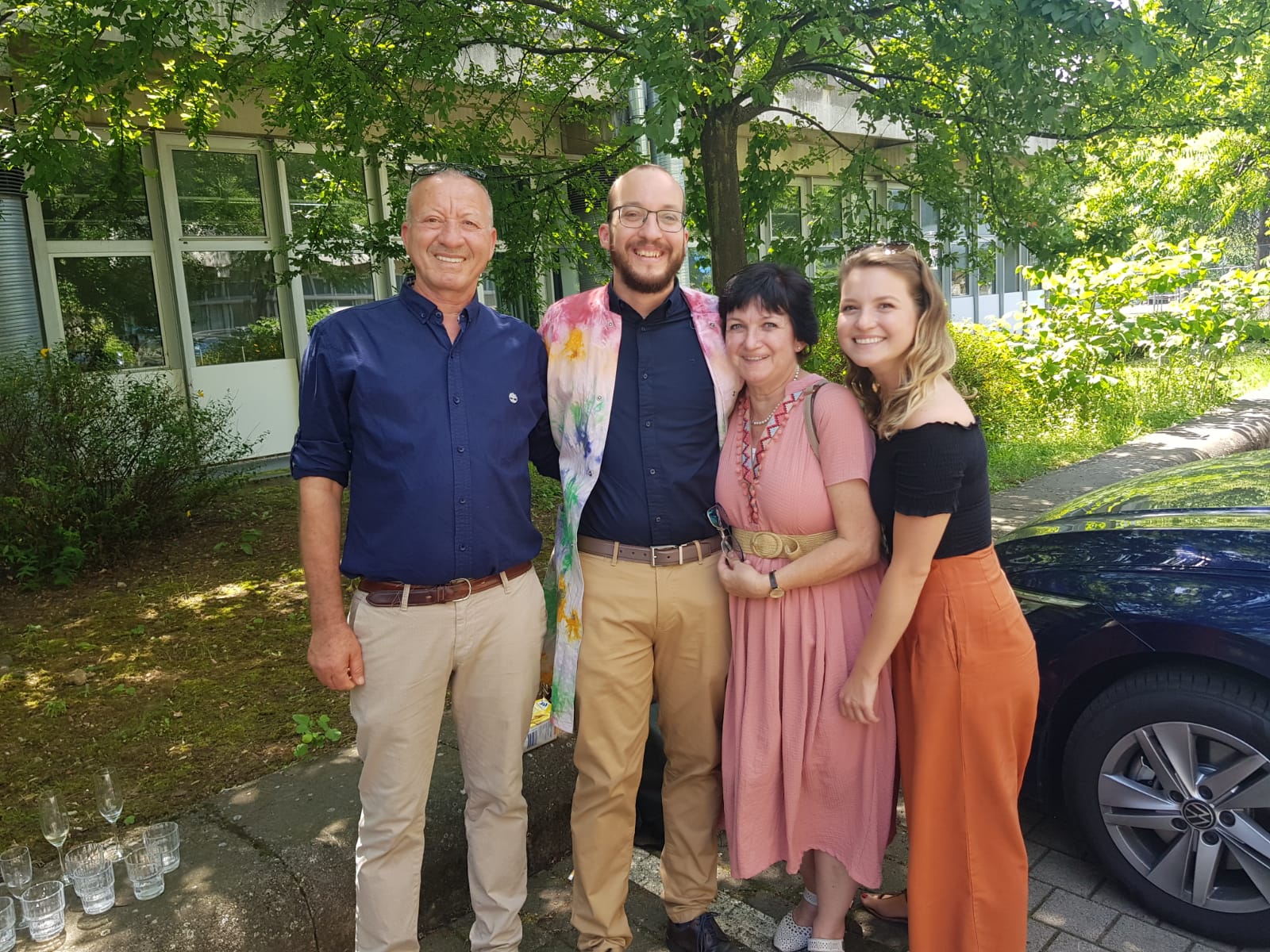 Second, I might have a spot for a PostDoc! Through some contacts in an NGO that supports psychedelic research in Europe I got connected to a lab in Frankfurt, ran by two female PIs. One working on mice and the other on monkeys. They are doing cross-species translational studies in behavioral neuroscience. Additionally, they are interested in researching psychedelics :) Had two interviews with them and they liked me (and I like them!). They are a younger generation of idealists and it sounds quite nice. The only issue, I need to get my own money. Which means, writing grants... But I am excited to get a chance to work on a topic I am interested in with people that seem to be interested in supporting me for a change.

After the defense (which my family attended) we head to the alps (with a short visit in Ulm, the city I lived at before moving to Heidelberg). A day later, my aunt and grandma from Germany joined us. They just landed back from Mexico a day before and booked a room in the same hotel as us. My grandma was quite tired when she arrived, we all thought it was jetlag. The area we were at has strict COVID guidelines for unvaccinated people. So my grandma (85 years old) and my aunt had to do an antigen test every morning. Two days later my grandma tested positive. The test was repeated and again positive. The hotel urged us to pack our stuff and head back to Germany (in retrospect, they were just scared shitless and me and my parents shouldn't have left, but that's another story). My grandma and aunt head back to my aunts' place and me and my family were on our way back to Heidelberg. Yesterday I started to have a cough. Today I had a fever and a headache. The antigen test turned out positive today in the morning, currently awaiting the results of the PCR test.

Grandma is doing okay. Mild symptoms. I will also be fine. I am just super pissed because my goddamn aunt scared my grandma so much that she didn't get vaccinated, even though she had appointments back in February. And now, through her anti-vaxx shit and lack of responsibility (who the fuck flies to Mexico right now??) she managed to get my grandma and me infected and multiple people across Germany into a 2-week quarantine. In addition, ended a two-week holiday for a whole family which was quite expensive for us (we are not a wealthy family) and adding much more extra costs for everyone involved.

I always asked myself "who the hell are these people bringing all these variants into the countries?". Well, "my aunt" is now a definitive answer.

So, yeah, I will be spending my holidays at home, instead of the Austria alps or berlin. Exactly what I needed after a 6-month thesis crunch. I hope my infection doesn't go that bad. Luckily I already had one shot which is supposed to reduce the severity of infection and transmission.

So, if you have any recommendations for TV shows, games, movies, books (audio), let me know!

View from our room in austria, it was lovely! 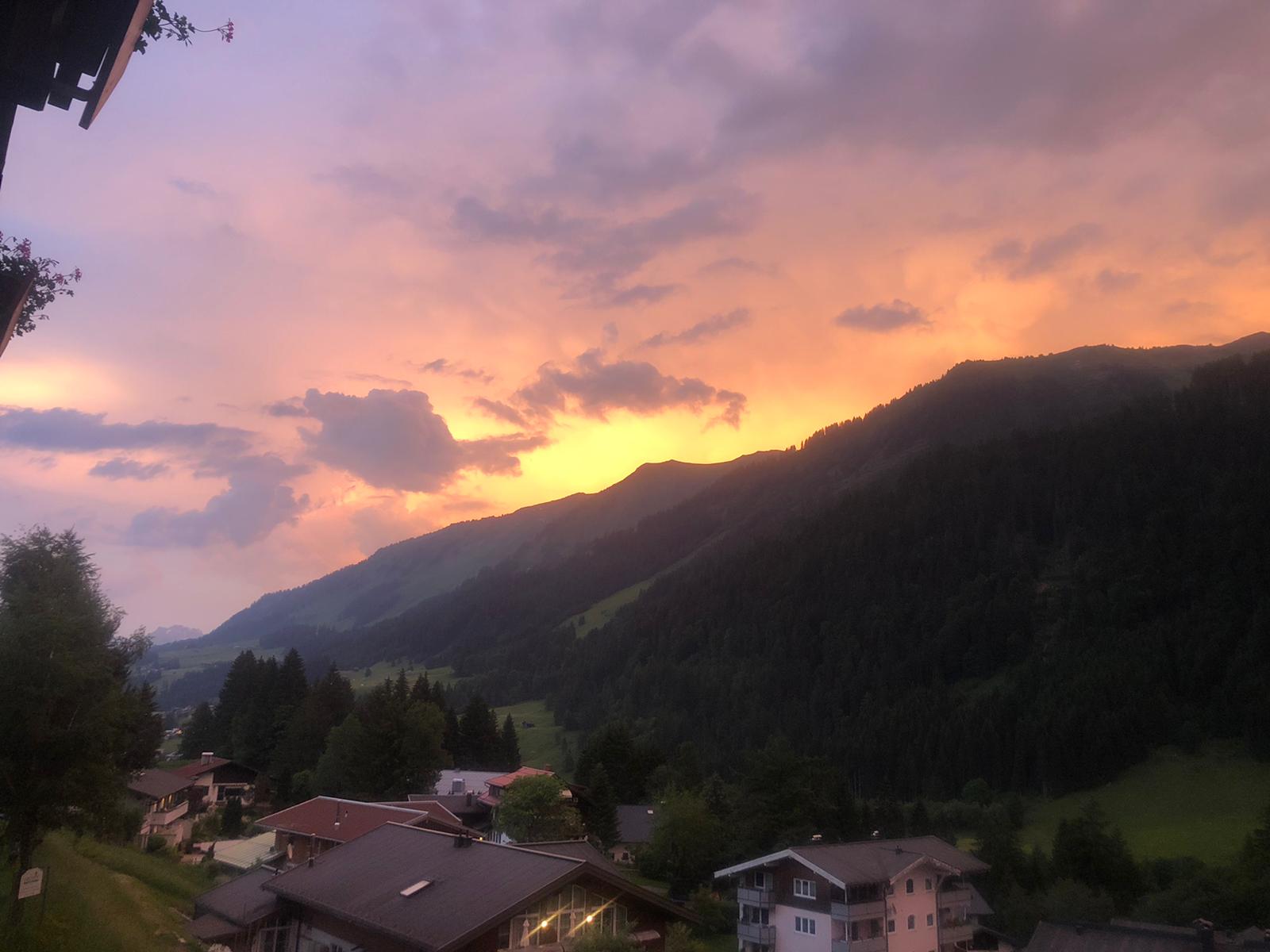 There was still some ice on the tops. This one looked interesting... 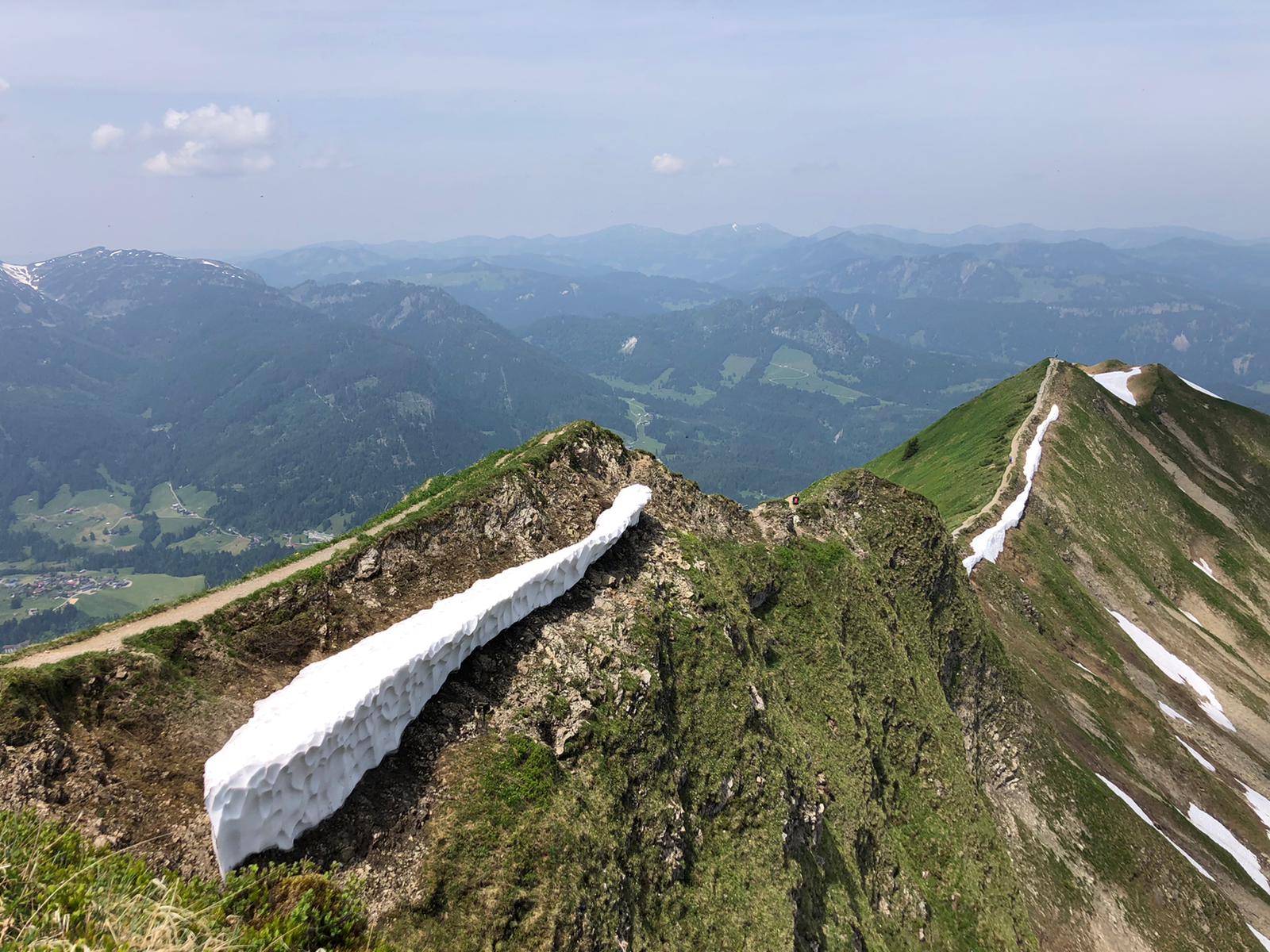 I am currently binging Altered Carbon. It sounds like your proposed "Manhattan project" for ageing. It is also a good watch and food for my nightmares 🤣🤣

I also got opioids once , after my ACL surgery and I also had the same thought. We were three people in the room, all of us got the same surgery. We were in pain, puking, barely able to eat anything, the weather outside was rainy and dark.

One pill and we were all serene and the day was beautiful. Everything was just "good". I enjoyed the rain and it's smell.

The Nakba: translates into "the catastrophe", is the word Palestinians use to relate to their displacement from their original homes/towns/cities in 1948.

Jaffa: Arabic town which is now part of Tel-Aviv/Jaffa. It is in the south of Tel-Aviv and predominantly Arabic. Even though heavy gentrification is pushing the Arabic population out of it.

Safed: An Arabic city in the north that is now predominantly Jewish.

I will leave this here as a continuation of the above posted piece: https://conquer-and-divide.btselem.org/map-en.html

My roomates' favorite band has a new album. I have been to 15 shows of these guys in the past few years and love their music. I got hooked on this a few years ago and they have just gotten better:

I have to admit that I didnt try your recipe, I only did one batch of hummus recently and it was using that standard method I use.

I tend to get the fancy chick-peas from alnatura in Germany. They are not salted or rather I never noticed them being salted...

Nice find johan. I rarely find such well written and well researched articles in english. I even learned some stuff I did not know before, thanks you :)

I am late to the pub. Couldn't drink with a hangover yesterday.

Am I supposed to feel this bad? I thought handing in my thesis would be great. But now I am sitting here two days later and I feel like shit.

Turns out I read the wrong checklist for handing in (there is a covid-list and and old list. I was supposed to read both). So I had to correct many technical things in my (already printed) thesis and run around hungover to get it fixed. Then, I get an e-mail from my already very shitty boss that the costs of my thesis printing are higher than he expected (even though I told him how much it will cost). Looks like I will be sitting on these costs... So I ended up binge watching the rest of The Expanse yesterday. Love the show, highly recommended.

Two weeks ago I ended (yet another) short relationship. I feel like shit. I am making steps in the right direction but just don't seem to get lucky in the dating world.

My grandmother still doesn't want to get vaccinated. I just got off the phone with her, where she asked me if I want to come to her 85 birthday party this Saturday. I declined. Still not vaccinated, waiting patiently. Maybe I will get lucky and get some residual vaccination this Sunday. And she is blaming the government and politicians and the pharmaceutical industry. And I can hear my aunts voice coming out of her mouth... All her grandkids have degrees in biology/medicine. But somehow she chooses to ignore that and trust conspiracy theories. All of this comes after she traveled to Poland for a funeral of a family member that died of covid (and did not get vaccinated).

The mother of a close friend died last night. 3 weeks between diagnosis and death. Cancer in her liver. Checking if I can go and be there with her. It feels like the only thing I can really do right now.

So yeah. I am not doing well, even though I should