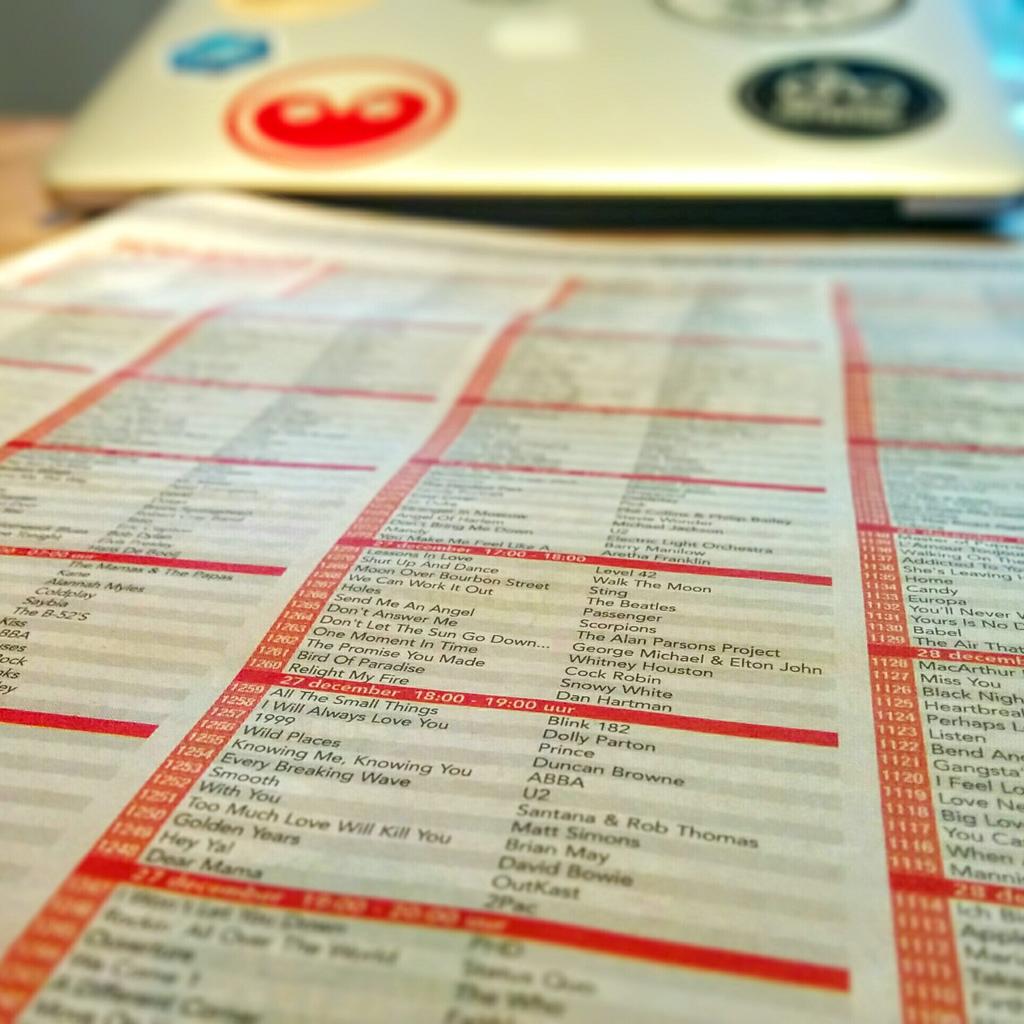 For as long as I can remember, the week between Christmas and New Year's means our radio is on for the Radio 2 Top 2000. The best 2000 songs of all time as voted by listeners are played in one week, leading up to the winner just before midnight December 31st. It's the list that years ago introduced me to a wealth of classic rock and Dutch music history. Now, it's mostly a list of music I love.

It's a cultural phenomenon here: 4,5 million people voted this year (out of a population of 16 million) on their best songs of all time. It's a list full of classic rock, nostalgic Dutch songs and one-offs. You see the list here; they're currently at #1281.

I voted for these (future) classics. What would you have voted? What are the best songs of all time?

PINK FLOYD - THE GREAT GIG IN THE SKY

CREEDENCE CLEARWATER REVIVAL - UP AROUND THE BEND

THE DOORS - RIDERS ON THE STORM

THE ALAN PARSONS PROJECT - THE TURN OF A FRIENDLY CARD

DAFT PUNK - LOSE YOURSELF TO DANCE

THE WHO - EMINENCE FRONT

LED ZEPPELIN - WHEN THE LEVEE BREAKS

JOHN FRUSCIANTE - THE WILL TO DEATH

Inner City Blues off the same album is on my top 10 list.

That whole album is incredible. One of the greatest ever.

I could probably choose 30 best songs, but for this one, it's the message and the fact that it is instantly unforgettable.

The music and the message are timeless.

I think there are two questions here. For me, my favorite songs may not be the same list of songs I'd call the best songs of all time.

The National - Fake Empire is a song I reconnected with recently.

But do I think these are the best songs of all time? No, not really. Radiohead is a good place to start, and I'd probably pick something off The Bends. Maybe Fake Plastic Trees, though Street Spirit is my favorite. The Beatles have to be on the list, and I'd pick Across The Universe.

I think it's easy to get stuck in classics like The Beatles, Led Zeppelin or The Who. To defend my high school years, I'll offer up Nine Inch Nails, probably Closer (though I prefer Hurt) and Nirvana, presumably Smells Like Teen Spirit. And Pearl Jam - Better Man.

It's tough to make a list. The more songs I offer, the more I'm sure I'm forgetting more obvious ones.

I knew I liked you.

For as long as I can remember, the week between Christmas and New Year's means our radio is on for the Radio 2 Top 2000. The best 2000 songs of all time as voted by listeners are played in one week, leading up to the winner just before midnight December 31st

Wow! That's really nice! I'll look more into these lists later. I wonder if the same names keep popping up.

What would you have voted? What are the best songs of all time?

From what you posted, I'd put "Riders On The Storm". About "Lose Yourself To Dance": I like that song too. I'd put "Get Lucky" and "Beyond" from RAM and the entire Discovery album. Speaking of Nile Rodgers, there are a bunch of Chic songs that I like. Especially the Take It Off album.

On a side note, I stopped halfway through AIR's discography. Don't remember why, I probably got hooked on another artist at the time or was in a more hectic mood.

Goldfish - Drive Them Back To Darkness

Vincenzo - Where You Are

Slavior - Origin (not available on YT, but I'll put "Another Planet" here)

Frankie Goes To Hollywood - Welcome To The Pleasuredome

Hallucinogen - Gamma Goblins {All The Way Down Mix}

Shpongle - Nothing Is Something Worth Doing

Babymetal - Onedari Daisakusen -it's track 7 in the album-

Nuyorican Soul - You Can Do It (Baby)

Slavior - Origin (NOT ON YT, but I'll put "Another Planet" here)

Must be restricted to certain countries then. Would be nice if youtube warned you about that.

Can you watch the video?

I can, yes. Sometimes videos are only allowed to be shown in particular countries, because some copyright holders wish it was still the 20th century.

Yeah, that's a bummer... which country did you set it to? I tried UK and global, didn't work. And of course, doesn't work in Brazil. I'm glad it's working for one country at least. :)

some copyright holders wish it was still the 20th century.

This is a great time to be alive. =D

So they like North America and Asia, but not Europe or South America?

I can only speak for Brazil. We are left out of a lot of things. But hey, we end up finding other ways to get the content we want.

This is the first time ever I had problems accessing music videos on Youtube. After searching a bit, you can find it on Spotify.

Speaking of Spotify, it took 6 years since it first started to open shop here (May 2014). It sucks. I don't know how Tidal or Apple Music deal with us here because I don't use their services.

Thanks for helping me anyway. :D

Favorite of all time is really difficult. I tend not to stick with one album for more than a couple months. That said, here are a couple picks from current & older rotations:

The sheer intensity of Brittany Howard's voice pretty much covers this one for me. I saw a live performance broadcasted on PBS and it was absolutely incredible-- I was in the middle of something, but ended up in front of the TV for over an hour, transfixed.

IMO Whitacre writes some of the most beautiful harmonies there are. I heard Colgate's Chamber Singers do this piece and it was what got me back into choral music.

It's hard to call this one of my favorites of all time, but I first stumbled upon it about a month ago and I've had it on heavy rotation ever since. Something about the beauty of the lyrics and the tight, twangy harmony laid bare.

I come back to this song whenever something really terrible has happened. I played it on the radio show in the days after the Paris attacks. It's one of the most beautiful expressions of hope I've heard.

It really depends on my mood, but this one is consistently near the top of my list:

For me there can only ever be one answer to this question :

However, if you'd prefer something you've probably never heard, this is a close second :

I'm sure if I put more thought into it, I'd think of much more. Here's what I could think off the top of my head though . . .

Sister Rosetta Tharp - Down by the Riverside Gospel/Folk

Against Me! - Walking is Still Honest Punk

Depeche Mode's But Not Tonight, it probably my absolute favorite.

Picking Bruce Springsteen songs is like choosing a favorite child for me. But the emotion and hook of this one bowled me over the first time I heard it.

I love Hans Zimmer. I think a lot of his songs sound a bit similar, and I wish he would take greater risks with the sound. Aside from that, I enjoy the depth that he puts into his music. I'm also a sucker for instruments of the violin family.

A perfect song leaves me wanting more. I never tire of this one:

Tom Waits - You can Never Hold Back Spring

Against Me -Paralytic States

Simon and Garfunkel - April Come She Will