I read this and panicked, thinking people had hacked into said technology which controls the brainwaves. Phew.

Here's where I sit. I was expecting more like galen but this is cool. Holy shit I am really struggling posting this simple comment this morning. 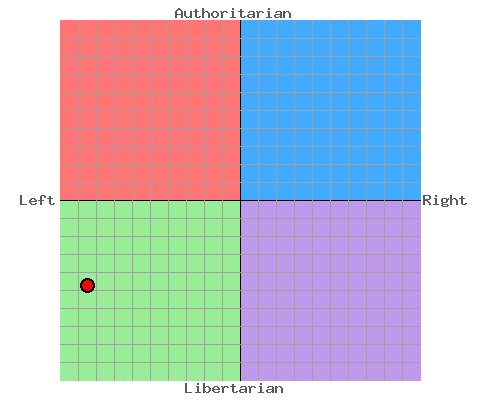 I'm also curious where the Astrology question places you. There's no "stupid" axis.

Founded in 1992, CADCA has lobbied aggressively for a range of federal grants for groups dedicated to the “war on drugs.” The Drug-Free Communities Act of 1997, a program directed by the White House Office of National Drug Control Policy, was created through CADCA’s advocacy. That law now allocates over $90 million a year to community organizations dedicated to reducing drug abuse.

'k. $90m a year for anti-drug campaigns. How much of that does CADCA get?

Records show that CADCA has received more than $2.5 million in annual federal funding in recent years.

FACT 3 (not from the article):

And that's where it all turns into a tempest in a teapot for me. I mean, the pharmaceutical industry is the most profitable business segment in history. Their profits are legendary. And let's say all of CADCA's funding came from Pfizer in 2013 (which it didn't, or why mention the government). It would still, theoretically, only be 1/4 of Pfizer's lobbying budget.

The article is basically a bunch of lobbyists and PACs slinging mud at each other. Somewhere in there, nobody thought to ask "do you think a drug company could make money on marijuana?" I mean, Pfizer made synthetic pot in 1979. Isn't it a bit more likely that they gave money to CADCA in a

"Yes, drugs are bad but certainly not our products"

spirit, rather than a

"Yes, drugs are bad particularly those that are being legalized across the country therefore oh shit we better jump on this 'weed' shit or we'll run out of people TO SELL OXYCONTIN TO?"

Here's an industry that spent $226m on lobbying last year. Maybe, somewhere in there, according to The Nation, they spent some money on lobbying against drug abuse. I mean, fuck.

Slight, but appropriate change of subject: marijuana has been de-facto legal in California for about eight years now. And lemme tell ya - weed ain't no thang. But you can't bust somebody for driving stoned because you can't test somebody for driving stoned... and when I ride the motorcycle down the 405 during rush hour, lane-splitting my way from the Valley to LAX, I am in a perpetual cloud of ganga smoke for eighteen.straight.miles. Not sayin' every driver is stoned, but enough of them are stoned that you might as well consider "traffic" to be stoned. And that's a little scary when they weigh 5000 lbs and you're 700 soaking wet.

So while I fully support legalization, I fully support it within a framework of caution and consideration. DARE was bullshit but just flipping off the safeties and saying "joints for everybody!" is not without consequences.

I've had cancer for the past few years

My least favorite thing in the world.

it turns out I'm going to live for quite a while.

My favorite thing in the world right now.

What kind of thoughts do you have on your own death?

edited: I shouldn't have finished reading her piece at work. It's a little close to home. It seems with each passing month, another friend or acquaintance comes toe to toe with the big C.

As far as death preparation - for me, as an old married man, my primary responsibilities while I'm here are to love my wife and kids to the maximum so they never have room to doubt it. Logistically, I avoid debt at every turn, and I insure my life to secure a home and several years of income. If I dropped today, My wife and kids have housing and money for 15-25 years (or longer if they are frugal).

The idea of having letters or emails send after I depart is a wonderful idea. I don't care where my physical stuff goes. I hope my art, films, ideas live in my kids and they multiply them into something more, and something better.

and pardon my french… FUCK cancer.

I know that there is a bunch of pushback and controversy about "glass-holes" and google… and in my estimation, many of the concerns have merit. Yes we'll need to find ways to protect privacy. Yes we will need checks in place on google and others...

But being alive during this kind of rapid tech advancement is just flat out exciting.

What are we doing here?

Are you trying to invalidate my irrational fears?

the admins do listen.

Who else is an admin besides mk?