I'm just home from work and about to head out the door to hit up some botanical gardens (cough, play pokemon, cough) so no time to waste today, folks!

Prompt #2. Write one of your dreams.

I actually wrote up a dream (nightmare) a few days ago, so I hope that it counts. This actually changed my perspective on life a bit. It was probably the ending that shook me the most.

I've actually now had two dreams recently about getting chased and hunted. It makes me wonder what is on my mind.

I've always been very afraid of my own mortality, so I always attributed dreams like those to be a reflection of that fear. That was honestly the first dream where I was conscious after my own death though. It's been a point of contention for me since it happened

I have a recurring dream. I'm in the driveway of my childhood home. As I walk up the asphalt pavement, I notice a dime on the ground. I lean over to pick it up only to see a quarter near it, then a nickel, then another dime, and so on. I spend uncountable time on my hands and knees filling up my pockets with seemingly infinite amounts of change. This dream fills me with joy. I've had experiences while dreaming when I think "oh! It's the driveway coins dream! I love this one!" and it's almost like I get to sit back and watch the dream.

Last night, I decided to try out a different restaurant for my last night in Richmond, so I went to a seafood place I'd never visited before. This proved a great choice.

The highlight of my evening was meeting, in the way one tends to meet people at bars, a very dapper, perfectly aged gentleman named Bob. Bob had silver hair and that goatee which older men seem to sport best, that frames the mouth and reminds one of Col. Sanders (with all due respect). He was dressed in a full suit while I sat at the bar, the least dressed person in the entire restaurant, in black exercise long-shorts, a black tank top, and vivid teal-turning-purple Asics. Bob knew the bartender somehow; they seemed to have shared past experience in the restaurant industry. I suspect Bob had been at the bar for a while before I ran into him.

Our conversation started because he was having a little trouble with his iPhone. He wanted to turn Airplane mode off, but the screen wasn't showing when he swiped for it. Frankly, I don't know why it wasn't - he was doing the right thing - anyway, after he tried a few times, he turned to me, who was sitting alone at the bar with a beer waiting for my mussels, and asked me if I had an iPhone. I said yes, and then revealed I'd been eavesdropping as I described to him what his problem was, anticipating that he wanted help with it. He called me out on listening in (a common bar crime), and then said yes, and surprised me. He didn't ask me to take his phone and turn Airplane mode off. He asked me to show him how to do it, on my phone.

I was impressed right away because you know dinosaurs. We all know dinosaurs - those people who are past fifty and manage to remain employed despite their dogged insistence that "they just don't get email." We talked about phones for a little while, and then Bob noticed my background.

For reference, this is my background. His name is Zeke. He is a wonderful pest. 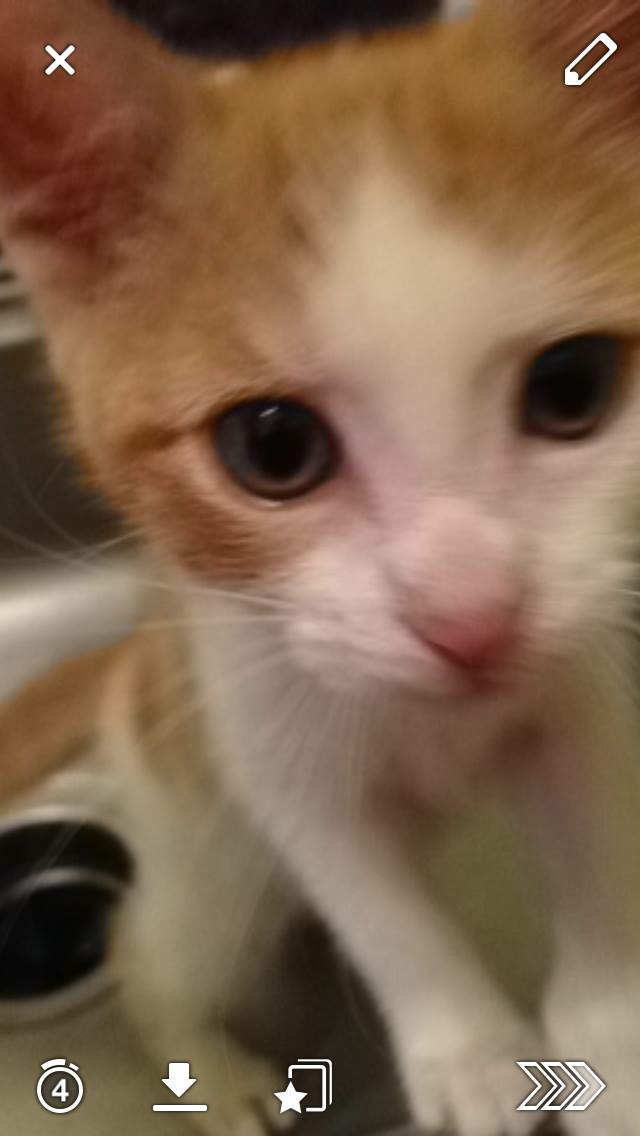 It turned out that Bob was a cat person too. And in a completely serendipitous moment, Bob leaned to me and participated in Day 11's writing prompt without even realizing it. He said,

"I'm lying in my bed - in my dream - I'm lying in bed, and my childhood cat, who was just the best cat we ever had, he's" (here Bob put up both hands in front of his pecs, hands in loose fists, and smiled) "he's lying on my chest."

I asked if he was kneading, with a smile, because my cat Zeke usually tries to knead my chest, and his claws are too sharp, so I end up holding hands with him instead.

"No, no, he's not kneading. He's just kind of sitting there. And - oh, that cat, that cat was a purrer. He could purr like a champion. He was just the best purrer. And he's sitting on my chest, purring. And every once in a while, he looks down at me, and his eyes are almost closed, so you can kind of see the eyes through his eyelids, but just a little bit of them. Enough to know he's looking at me. And he's sitting on my chest and purring. That's one of my best recurring dreams. That's one of my favorites."

I knew there was only one thing left in the story I needed to know. It was a requirement. Any cat lover would know this. So I asked -

"This childhood cat, this great purrer -- what was his name?"

And Bob said, "Frisky J. Sylvester Talcott. My brother and I, we named him together."

If that isn't the absolutely perfectest name for a childhood cat, I don't know what is. I had to write it down, at that instant.

Everything about that story and that vintage gentleman was just too good, in the best kind of way.

I was really happy I got to share in that moment and story last night.

Tagging everyone I tag on the prompt because it's cool, and serendipitious, and a touching story. And arguewithatree because cats. lil War OftenBen ThatFanficGuy ButterflyEffect

Today, I made a bar friend who told me a great recurring dream he had. I will type it up as soon as I am "home," or at the hotel, not drunk, and my battery is above 10%.

I will regret this comment in the morning and that's okay.