I'm in my early 20s, and I had the following conversation at a party the other day:

Her: Oh, I teach at X High School.

So, to answer your question, now that my friend group includes teachers from my high school, but no high school students, I don't think I have any choice but to see myself as an adult. Ugh.

I heard rumors that Harper Lee didn't think the sequel was worthy to be published, but that now she's nearly senile and her family and/or agent was able to talk her into releasing it. I don't know if that's true - I certainly hope it's not - but I'm definitely nervous.

It's going to have to be an absolutely perfect book to be a worthy sequel to To Kill a Mockingbird, as it is.

I trust my instincts.

By that, I mean that the first word that comes to mind when I'm trying to articulate an idea is usually the most accurate one. I used to revise everything I wrote over and over again, trying to capture the spirit of my thoughts by changing words and sentences around, but the result usually read like an owner's manual that had been written by a committee - no soul at all.

In the situation you're describing, in which I just string words together without regard for grammar or sentence structure, I certainly have to go back and edit them into a form someone else would understand... but I try to change my actual word choice as little as possible.

That's a good point, and I've certainly seen those fliers myself. I guess I missed the pattern because I was focusing too much on the more absurd tasks mentioned in the article, like unwrapping trophies or delivering donuts, and on my inherent contempt for the start-up scene and the city of San Francisco.

I'm still doubtful that this represents a sustainable lifestyle.

I'm not exactly well-read, but Peter Wessel Zapffe's view of the human condition, as set forth in The Last Messiah, resonated with me. He considers the over-evolved human intellect to be the source of existential anguish, due to its inherent need to find meaning in a fundamentally meaningless world, and identifies four "consciousness-limiting" coping mechanisms by which people stave off panic.

The tragedy of a species becoming unfit for life by over-evolving one ability is not confined to humankind. Thus it is thought, for instance, that certain deer in paleontological times succumbed as they acquired overly-heavy horns. The mutations must be considered blind, they work, are thrown forth, without any contact of interest with their environment.

In depressive states, the mind may be seen in the image of such an antler, in all its fantastic splendour pinning its bearer to the ground.

When he arrives, there’s already a second Tasker there; they spend three minutes moving a table, and he gets paid $60.

I want to know who's willing to pay $60 (twice!) for three minutes of labor. That's, what, $1200 per hour? I seriously doubt anyone's finding workers through TaskRabbit other than the sort of people who work via TaskRabbit - twenty-something rave-attending craft-beer-drinking millennials.

I'm also doubtful that anyone could make their living this way outside the San Francisco city limits. 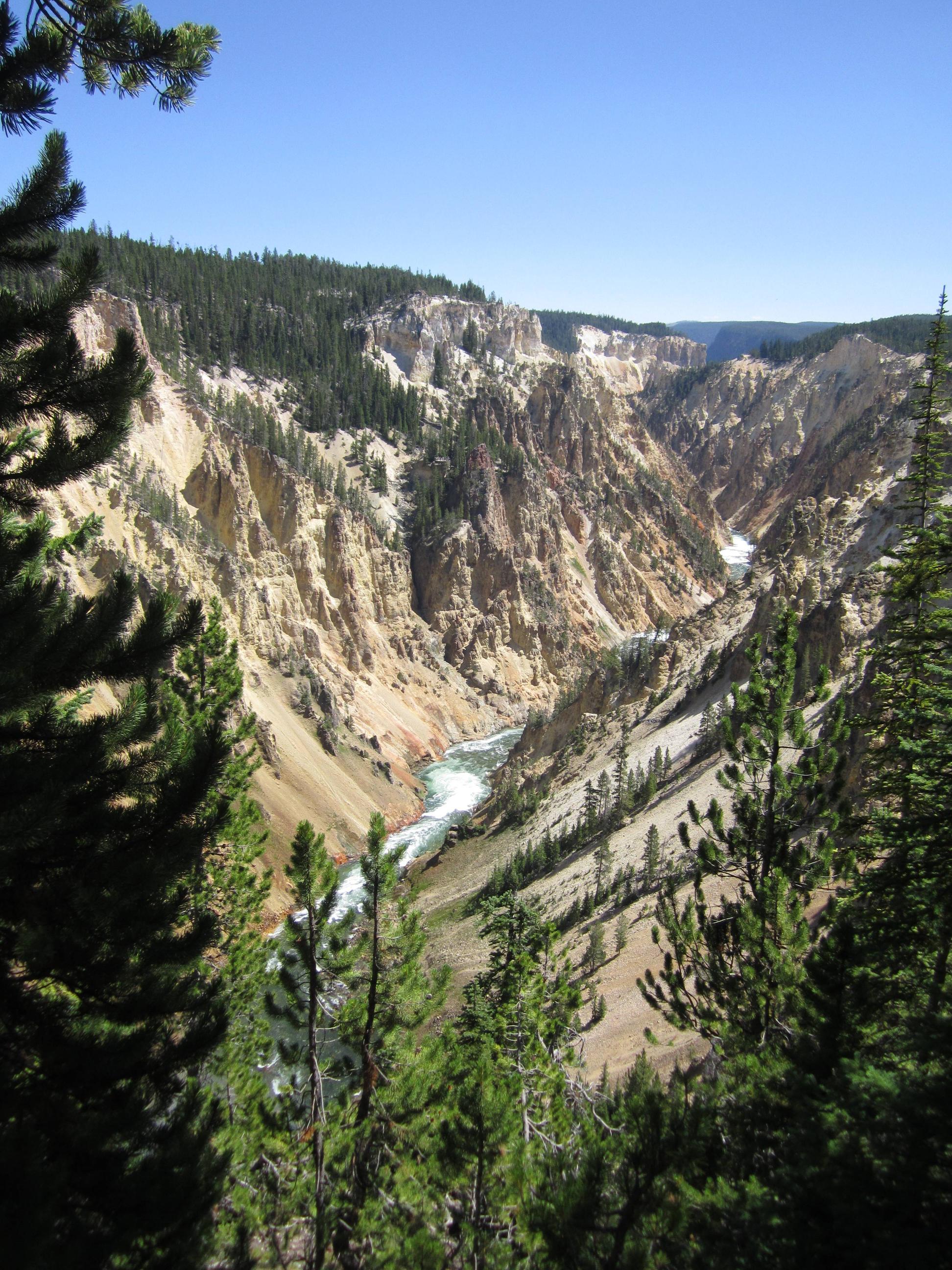 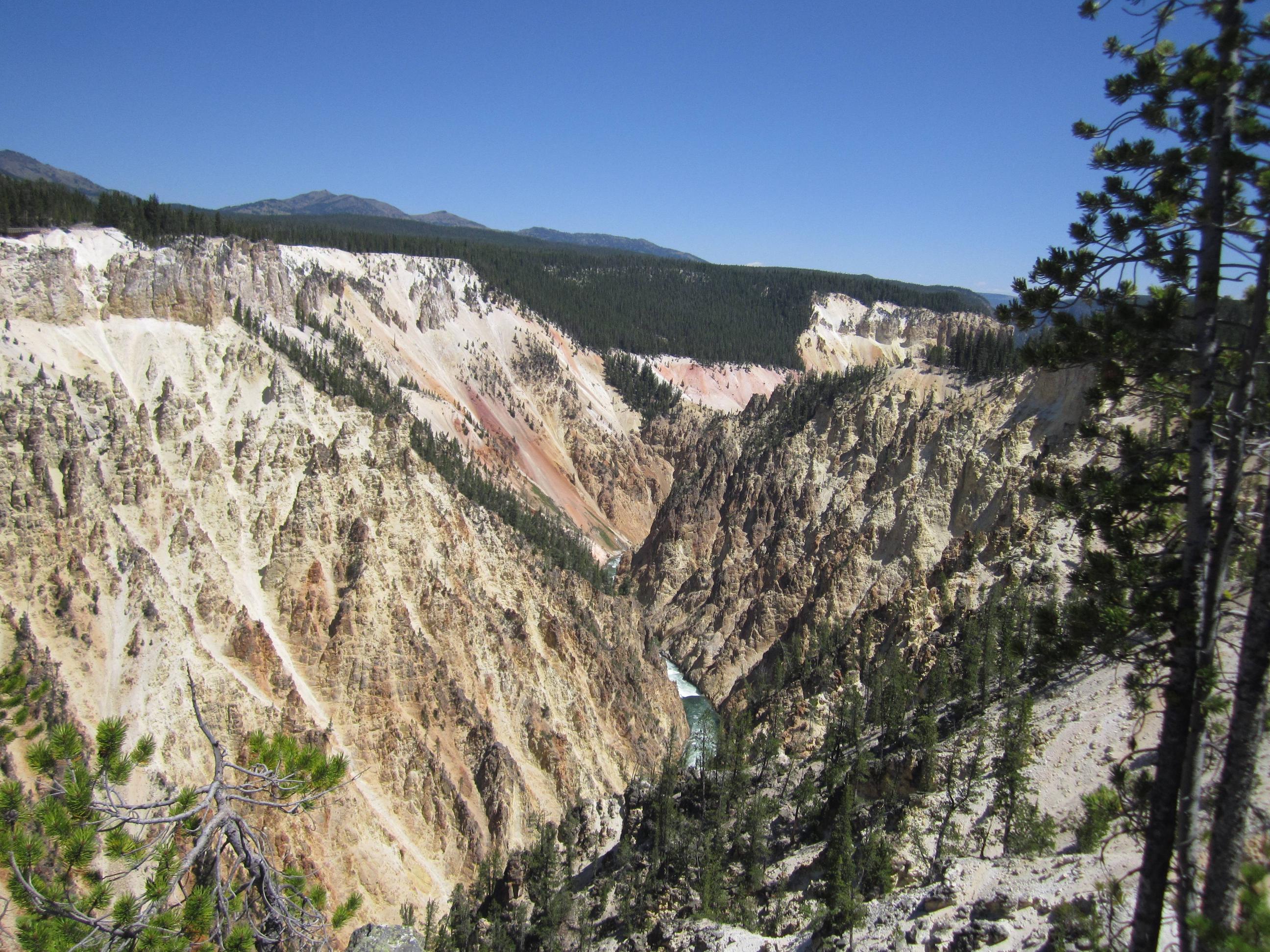 OK, I'm coming up on my last year of college, writing for my school's daily student newspaper, and kicking around the idea of trying to make it as a freelance writer after I graduate.

Any freelance writers out there, I'd be interested to hear how you got started in your career.

A couple semesters ago, I had a class in which I was assigned to write a research paper about some aspect of the Bible's Old Testament. I tossed around the idea of writing about Julian Jaynes's theory and its implications for the earliest books of the Bible, but I couldn't come up with anything to say that Jaynes hadn't already said (except 'man, wouldn't that be cool.')

I'm skeptical, especially since there's not really any way to prove Jaynes right or wrong. Still, wouldn't it be cool?

Here's a few shots of summer in Wyoming. 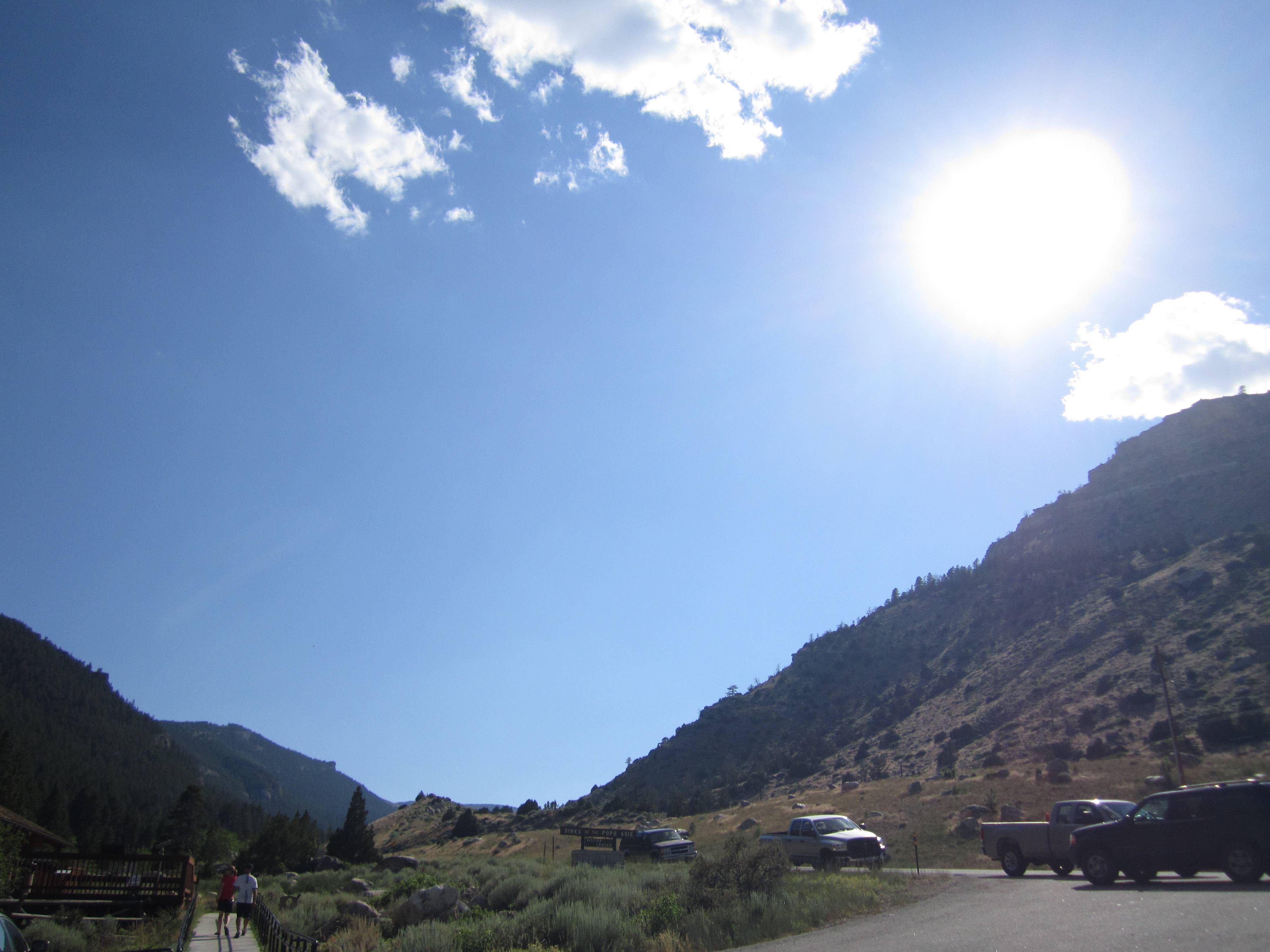 ...and the Popo Agie River, which flows through Sinks Canyon. This shot was taken from inside the cavern through which the river disappears underground. 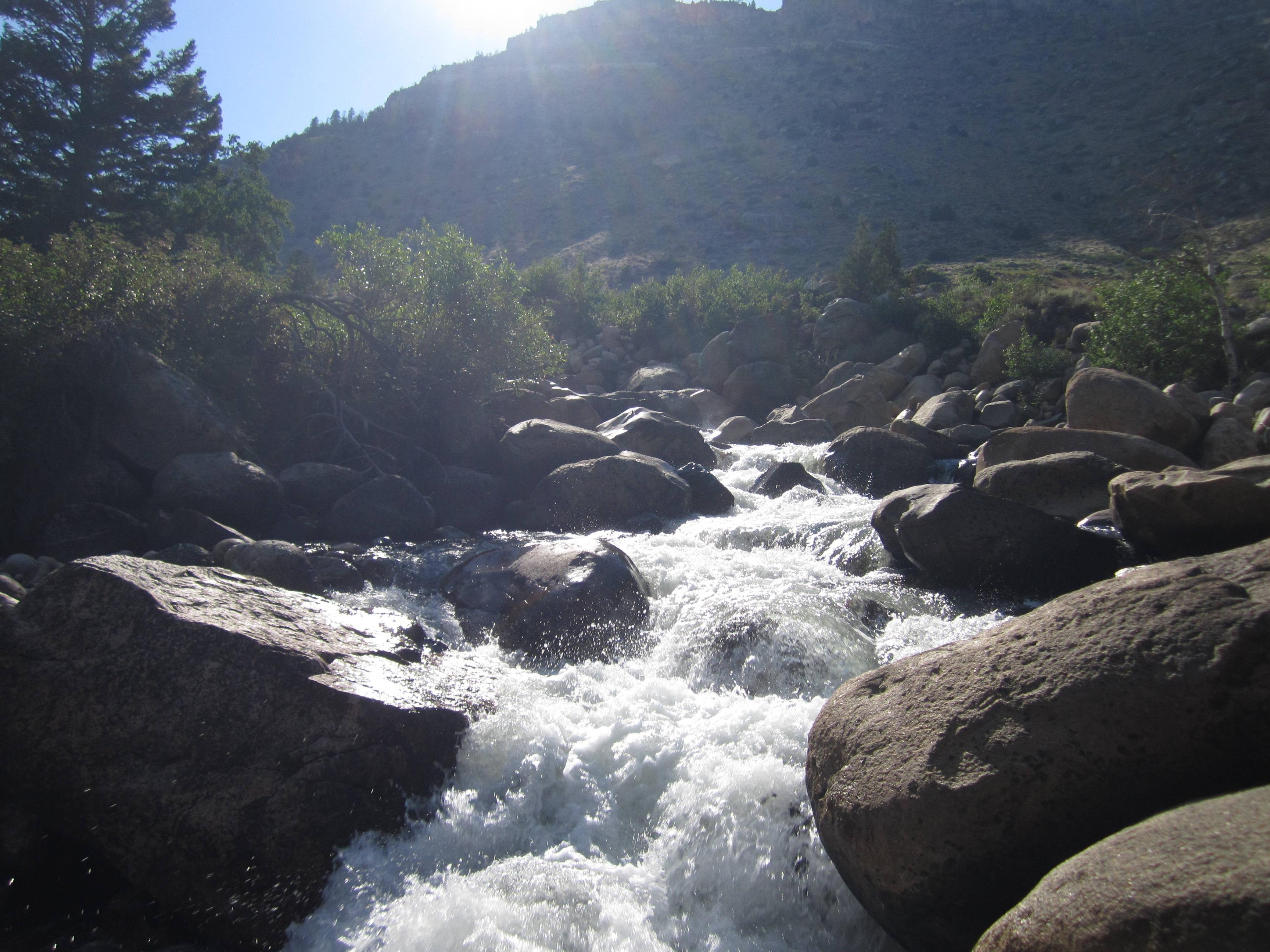 A reservoir near Wheatland. 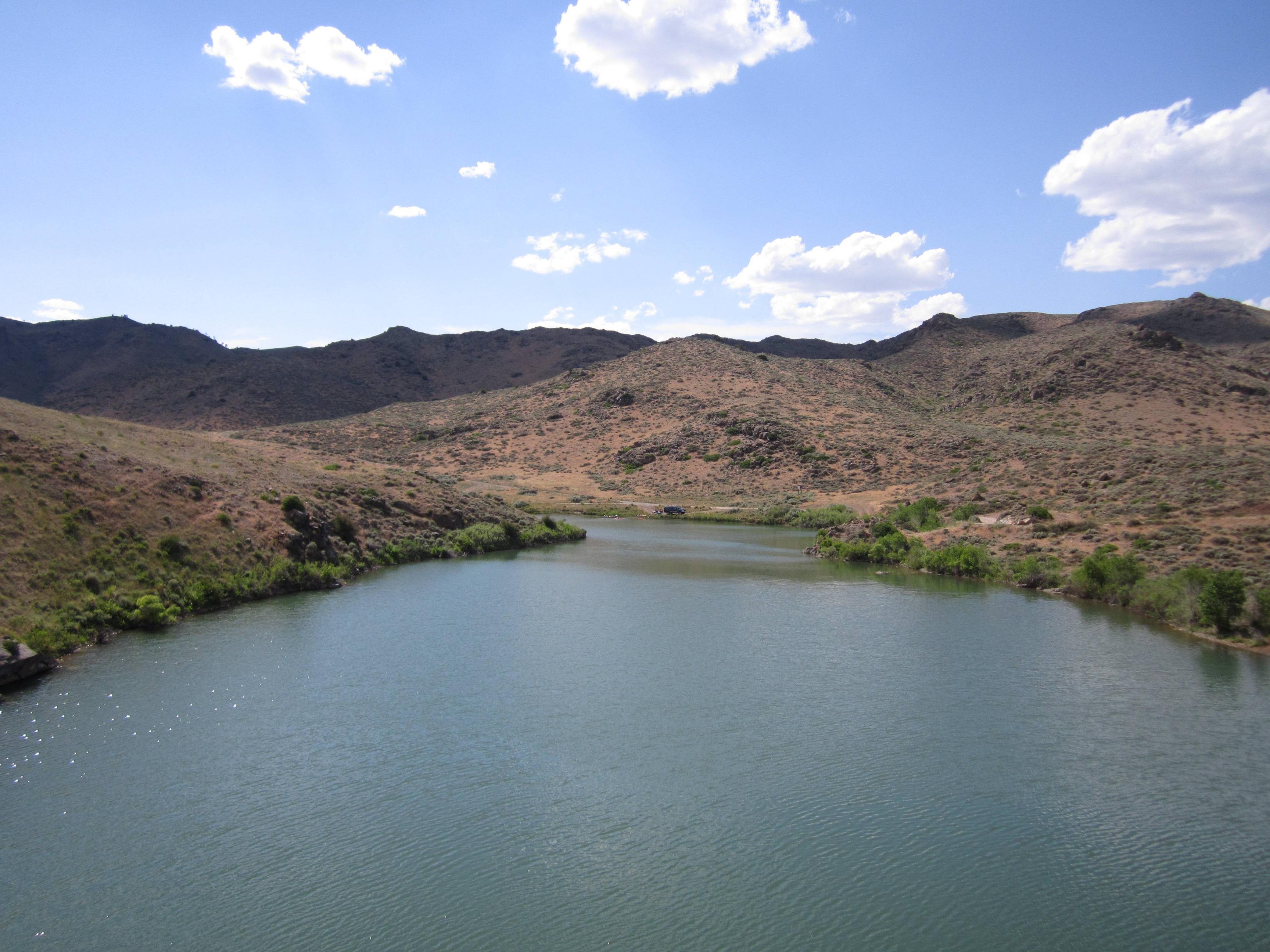 If you're interested in learning to program JUST as a means to create text-based games, not as an end in itself - i.e., if you'd rather focus on the story than on the game design - you could check out Twine (http://twinery.org/). Twine is a tool you can use to create interactive text games, and you don't have to do anything more complex than simple CSS and pseudo-Wikipedia markup language.

I wouldn't recommend it if you plan to track stats, or have the PC fight NPCs, or create an inventory system more complex than (has item = yes or no?), because your story will quickly get too tangled to keep track of. Twine's really best if you're creating a CYOA game or similar. Still, in my opinion, anything Inform can do, Twine can do better.