That was cool. Never thought about the difficulty of such a reentry and landing. Blows my mind that they can figure out all this shit out and pull it off!

Thanks! Good thing I use Bank of Ethel!

Ha! I didn't catch that. Nice!

I'll have to play a lot stupider next time. It was fun while it lasted.

My whole computer has turned into italics!

Juggling. Used to do it all the time 25-30 years ago. Went semi-pro even. Circus. Could go 5 minutes with 5 balls and throw in a bunch of tricks. Records: 80 throws with 6 balls, 21 throws with 7. Now I juggle about 3 times a year, only when I'm asked to do something in a local show, or occasionally a math of juggling talk.

Today my main hobbies are guitar and puzzle making. Bit of poetry and writing.

Unicorns are kind of lame.

I own what I think is the only "in the wild" copy of Wayfarers 1.0... mk was irritated that I bought it just before loads of new artwork was put in.

You can see this pattern in a LOT of places. Here's an article I wrote on some years ago, along with other resources, like blackline masters for pop-up fractals and children's stories:

Can't get enough of this one, Come Away by Sons of the East:

I started using subtitles years ago watching movies with my Norwegian gf (now wife). With Norwegian subtitles, it helped me learn the language at the same time it helped her with understanding the dialog. Now we're 50-50 with Norwegian or English subtitles.

Interestingly, we were binge-watching several episodes of Killing Eve last night, and one of the episodes did not have English or Norwegian available. Rather than try to download the episode and set up a subtitle file with VLC, we just watched without subtitles. I missed several parts where the characters were speaking with strong British and Irish dialects. Further, I've become so used to having the words on the screen that I found it mentally draining to focus on the spoken words. I was happy when the next episode had English subtitles and I could have my support text back. (To be clear, I am native English-speaking and have no difficulties with hearing.)

Watching without subtitles is for me is worse than watching with subtitles. I'm guessing that my brain processes visual data so much more efficiently than auditory data, that having the dialog onscreen makes it easier to follow.

I used to hate subtitles because I felt distracted trying to read and watch the nuances in the actors' faces at the same time. Now I don't even notice that the subtitles are there, but I notice when they are NOT there! Subtitle reading is a skill that with practice becomes effortless.

I just passed my Norwegian language tests for immigration - got highest levels on oral, writing, reading and listening (yay me!) I've been living in Norway for 10 years now. The first two years I tried to get into the language courses at the university where I was working, but because I was on a year-by-year contract I wasn't high priority. I was number 180 on the waiting list year one and number 75 on the waiting list year two. I just learned on my own.

Watch movies in the language, with subtitles in the SAME language. Don't put English subtitles on your Spanish movie, put Spanish subtitles on your Spanish movie. You can read along and hear and it doesn't matter if you understand only 10% of the words. You'll pick up context and common phrases and even slang expressions. You get to see how the words are being pronounced. Watch one movie per week. Go back and rewatch your favorites, you'll find over time you understand more and more. Try to speak the lines along with the actors.

Learn songs in the language. Even better if you play guitar or piano and can play and sing along. Songs are some of the best way to memorize words. Run the lyrics of the songs through google translate and compare so you get the gist of what is being said. Try to learn one song a week.

Norway has a service called Klartale (clear speech), it's a simplified news service with easy words and very well pronounced Norwegian. You can read or listen or download podcasts. Maybe there is something similar in Spanish? Download podcasts or children's stories and play them in the car. Don't understand? Doesn't matter, try to repeat the sentences and phrases you hear. It may help to imagine you're an actor and try to ham up the accent as you visualize yourself as a Spanish movie star. It's partly about the mindset.

I bought the Pimsleur Norwegian courses. I think for Spanish they offer 90 lessons. It's (almost) entirely listen and repeat, which means you can run the lessons in the car or while walking to work. I had a half-hour walk to work which is the length of the lesson, so I did a lesson a day, once on the way to work and then repeating it on the way home. I recommend these. (I did 10 lessons in Spanish when I was going there for a conference and learned enough that I was able to ask someone on the street for directions to a pharmacy and understand enough words he told me to be able to find it.)

Extreme case: Immerse yourself in the language by moving to the country for 10 years. Be extremely frustrated for the first 6 years that you are living in a fog and not understanding shit. Be satisfied if after 10 years you can get by and don't care anymore about liberally mixing in English whenever you don't know a phrase. Tell yourself that the natives think it's charming how you mangle their language in amusing ways.

Here's another critter we had visit in February. 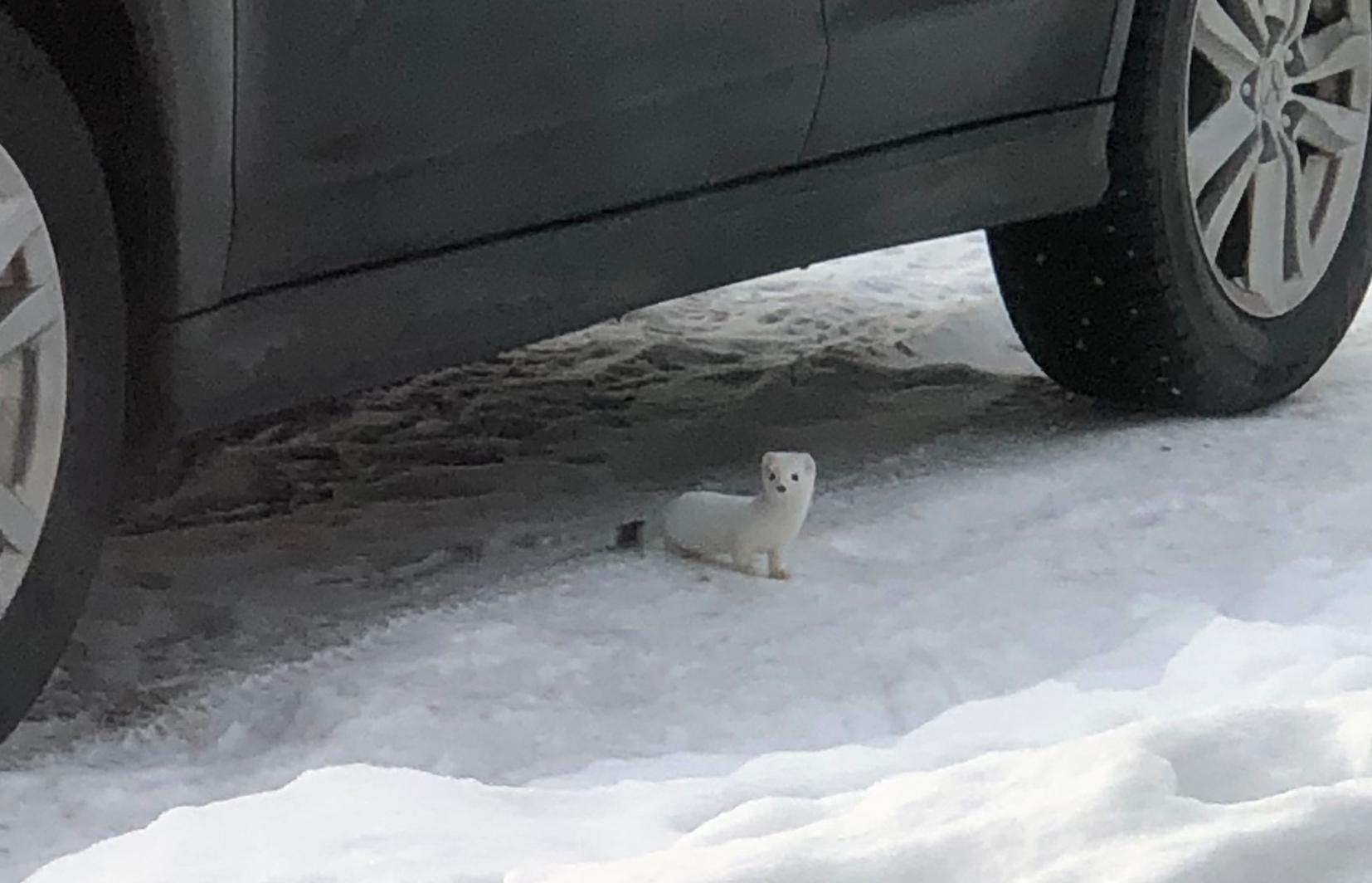 It's a weasel in his winter clothes. In Norwegian weasels are called røyskatt, which translates to "cairn cat", røys = a pile of loose stones (cairn) and katt = cat. "Røyskatt" is a much cuter name than "weasel" imo.

Just commenting on mk's post about the painting he's making for me and this walks by the window: 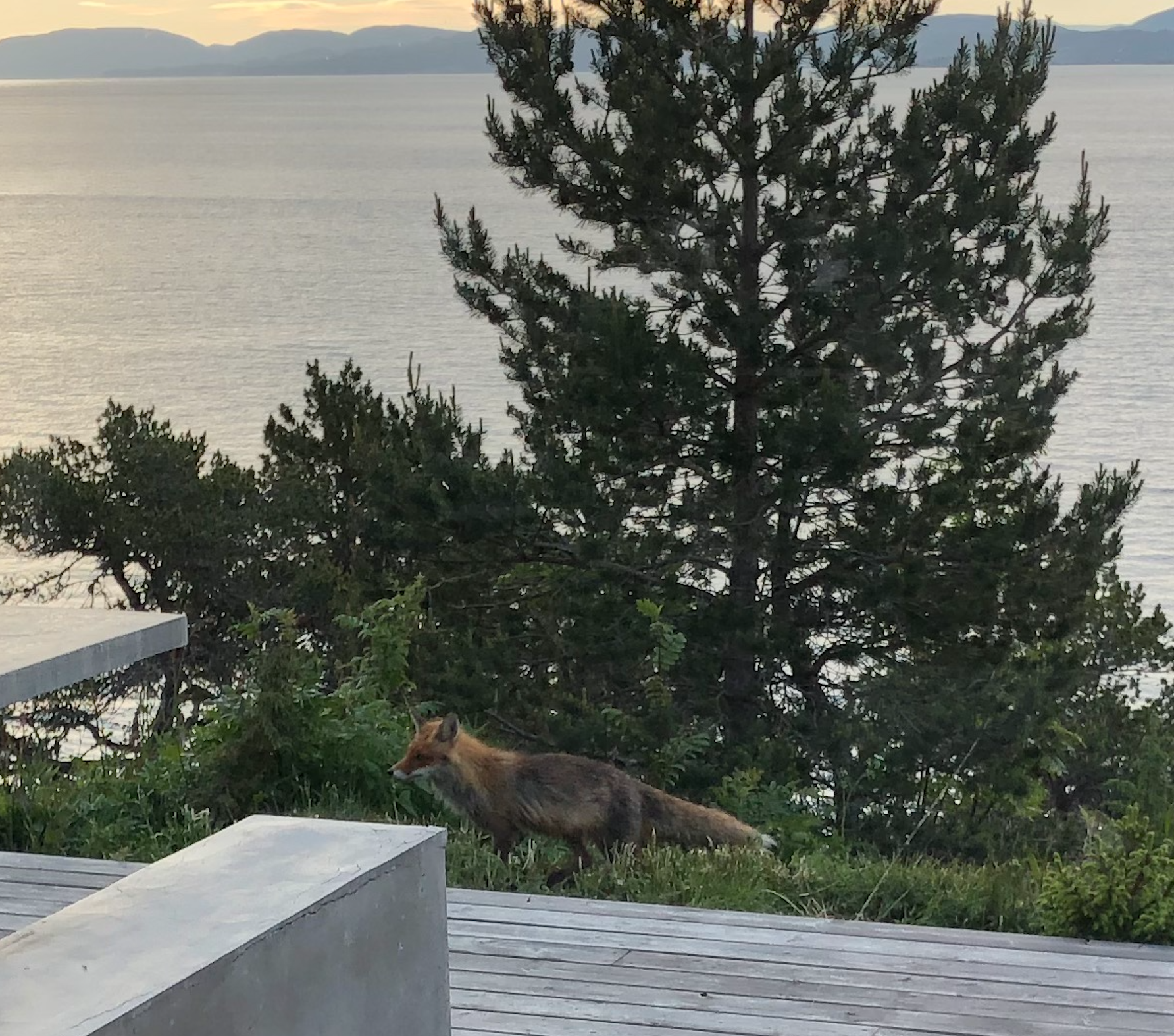 Seen deer, mice and weasels walk by, but never a fox and never one this big.

Guess I should share this, too. This is from Friday, three Orca whales swimming by the window:

We get harbor porpoises fairly often, but Orcas only a few times every summer. Usually it's these three. Seems like a strange number to always be seen together. Very small pod, I guess.

UPDATE: my fiancé just told me of this video from the same day, taken by a group of teenagers on a boat that followed the orcas for two hours. Turns out there's four of them, probably a mom and dad and two kids. Check out the footage here

mike is very happy with how the painting is coming along. It's one of my most favorite spots, this one just up the hill across the road. I'm amazed with your painting skillz. Really looking forward to this!

We're two weeks into our Kickstarter (tessellation puzzles) with 3 weeks to go, and backers have slowed down. We're contacting science centers and pulling the stops on people we know to get the word out. Still optimistic. It's been a really fun project -- I've made friends with math artists around the world licensing designs, and then it's been a really tough process getting the designs to work into a puzzle that can be put together in a lot of ways.

Got the samples from the factory yesterday, and they look great, so production is a go if we get the funds. mk and steve have backed the project already -- kudos to you both! 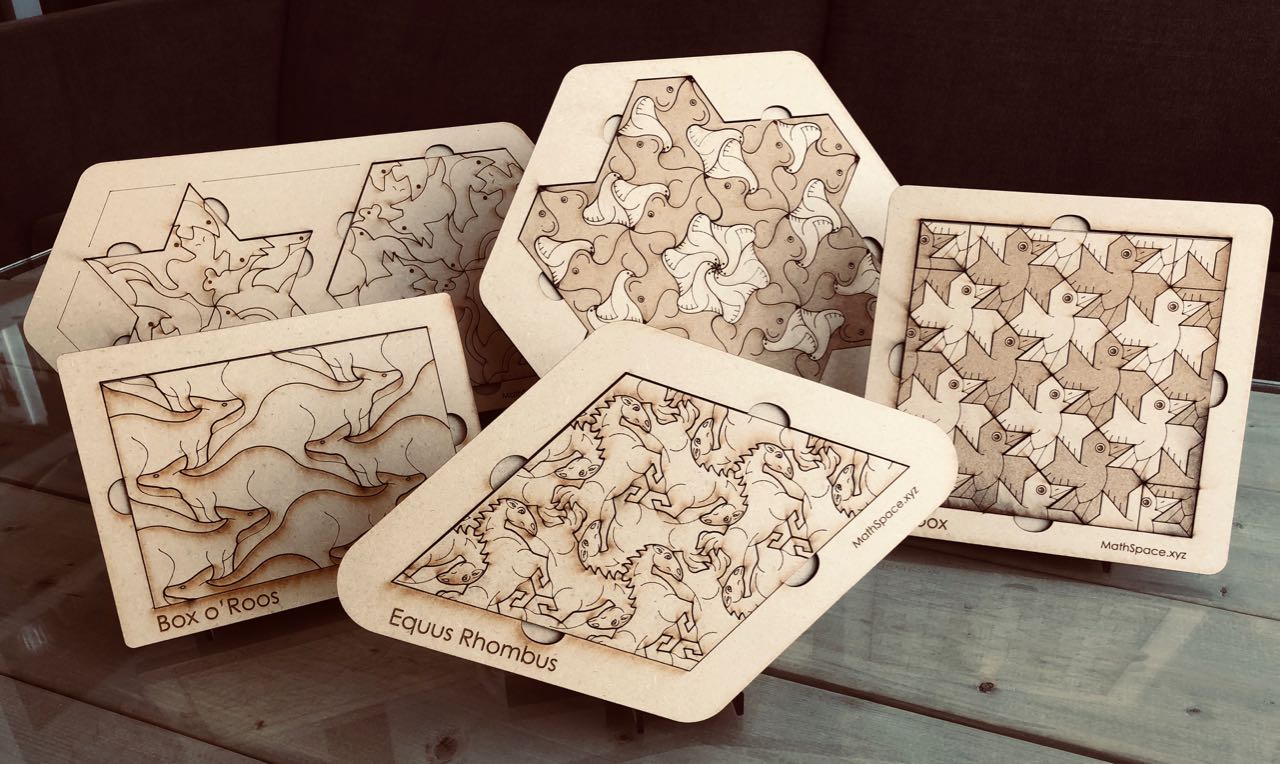 here's the link to the project

In other news, I joined a men's choir. They're a bunch of fun and funny guys, with a good sense of low humor. We sing all kinds of songs. At 51 years old, I'm the youngest by quite a bit. Going on a retreat with them this weekend.