a thoughtful web.
commentspostsbadges
Good ideas and conversation. No ads, no tracking.   Login or Take a Tour!
Is Wine Fake?
Is Wine Fake?  ·  9
ooli  ·  6 days ago

Wine as a product hits the sense of taste/smell - which has the deepest anchors into the limbic system - and the sense of status, which has the deepest anchors into the social system. The result is a complex blend of personal preference and herd preference. Add in the fact that it's an inebriant as old as history itself and you have yourself a conversation starter.

The most useful aspect of the "is wine fake" discussion is how strongly someone feels about it and why. Those who lean heavily into the "nobody can tell a good bottle from a bad one" can be understood to have no understanding of status and those who lean heavily into the "but it's still Chateaux Margaux" can be understood to have too much understanding of status.

Somehow wine is a socially acceptable way to flaunt one's wealth and be a douchebag. I wonder why. If I wear fat gold chains and a diamond studded medallion I'm seen as low class. I insread order a 1940 Chateau blah dee blahfo$500 a bottle. It's expected the restaurant sommeleir would come kiss my ass. because I'm a high roller.WTF!?

I mean, it's the world's oldest luxury. The Minoans shipped it around the Mediterranean. Scarcity is luxury and the consumption of luxury is a mark of status. That's true from the Chinese to the Tlingit.

My wine palate tops out at around $1000 but my wine appetite tops out at about $20 ($150 for special occasions - I bought a bottle of Perrier Jouet Fleur for my daughter's birthday and had the bottle made into a vase later). That's just how I'm wired, other people are wired different. I'll say this - there's a lot less crime, violence, extortion, exploitation and environmental destruction around wine than any other luxury. The guys making fancy-ass wine? Live well. The guys mining diamonds? Notsomuch.

You're right - fat gold chains will not impress the wine crowd. A Van Cleef and Arpels Alhambra necklace, with a hundredth the gold and about the same price, will. It's all social signaling and it's not like modern society invented it.

You can be mad about it or recognize that people spend money to impress other people. If you aren't surrounded by people impressed by spending? Count your blessings.

Friend of mine grew up rich. His dad had an impressive wine cellar. When his kids' friends turned 21 he'd give'em a bottle of wine as old as they were. The one he gave my girlfriend? We were too impressed to open it. When he found out about it he retaliated by giving her another that he'd already drunk a glass out of.

Of all the shitty things wealthy people do, "enjoy wine" is pretty harmless.

You mumble something about how you can really taste the strontium.

Well fuck, if it isn't me when tasting whisky.

How far beyond wine you want to apply this is left as an exercise for the reader.

..I'm going to apply this to whisky..

I'll bet you can tell the difference between a blend and a single malt.

"Peated whisky is now my personality for the next 6 months."

Pepsi asked consumers to blind-taste-test Pepsi vs. Coke; most preferred Pepsi. But Coke maintains its high market share partly because when people are asked to nonblindly taste Coke and Pepsi (as they always do in the real world) people prefer Coke.

I prefer Coke, and always taste nonblindly. It's time for some soda science.

Some years ago a dentist recommended diet cola, and now I don't think I could enjoy the syrupy sweetness of a regular soda, but I always enjoy a Diet Coke, especially from a fountain. When a franchise only carries PepsiCo products, I'll have a Diet Pepsi, but I've never tasted them side by side.

I'll start with a non-blinded taste test, trying to see if I prefer one drink or the other when I know what they are. At least one day later, I'll try the two covered cans to see which one I prefer and whether I can tell which is which.

If I have enough patience to wrap more cans I'll mix them together in the fridge and pick two at random and see if I can identify them by taste. Will report back. 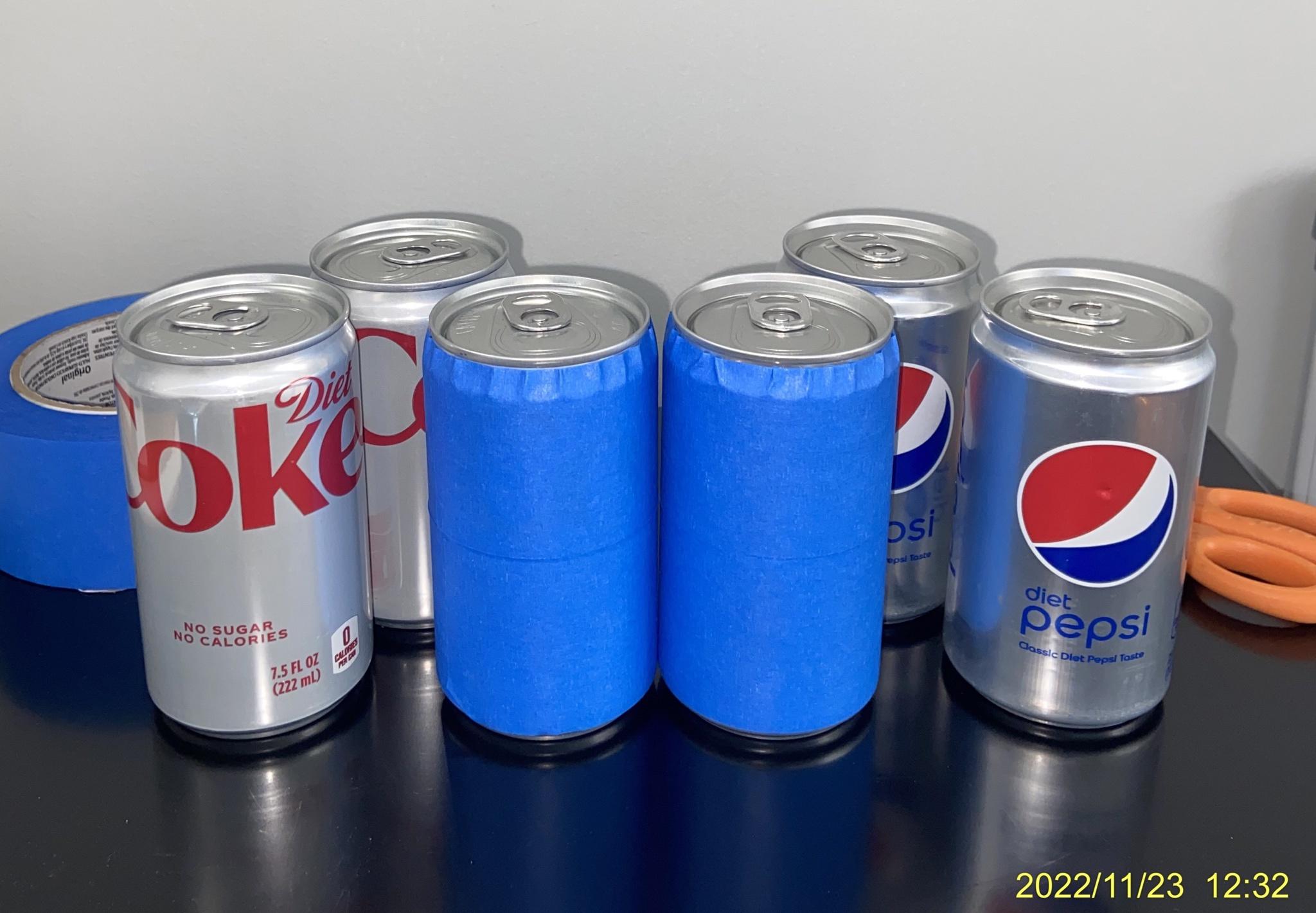 Sipping from the two cans straight from the refrigerator I found the tastes very similar and hard to distinguish. "Maybe Pepsi tastes a little better?" I noted. "Both mainly taste sweet. There's a lemony sourness in the background."

"Coke seems to have a bit more of the sour flavor. I want to say Pepsi tastes 'smoother' or is 'more balanced' but I'm not sure what I mean by those words."

"If these were the same cola but someone told me they added a little grapefruit juice to one I would think it was the Coke."

In Blink, Malcolm Gladwell recounts the drama of the Pepsi Challenge, a pivotal moment in the Cola Wars (my favorite war).

In the early 1980s, the Coca-Cola Company was profoundly nervous about its future. Once, Coke had been far and away the dominant soft drink in the world. But Pepsi had been steadily chipping away at Coke's lead. In 1972, 18 percent of soft drink users said they drank Coke exclusively, compared with 4 percent who called themselves exclusive Pepsi drinkers. By the early 1980s, Coke had dropped to 12 percent and Pepsi had risen to 11 percent and this despite the fact that Coke was much more widely available than Pepsi and spending at least $100 million more on advertising per year.

In the midst of this upheaval, Pepsi began running television commercials around the country, pitting Coke head-to-head with Pepsi in what they called the Pepsi Challenge. Dedicated Coke drinkers were asked to take a sip from two glasses, one marked Q and one marked M. Which did they prefer? Invariably, they would say M, and, lo and behold, M would be revealed as Pepsi. Coke's initial reaction to the Pepsi Challenge was to dispute its findings. But when they privately conducted blind head-to-head taste tests of their own, they found the same thing: when asked to choose between Coke and Pepsi, the majority of tasters 57 percent - preferred Pepsi. A 57 to 43 percent edge is a lot, particularly in a world where millions of dollars hang on a tenth of a percentage point, and it is not hard to imagine how devastating this news was to Coca-Cola management. The Coca-Cola mystique had always been based on its famous secret formula, unchanged since the earliest days of the company. But here was seemingly incontrovertible evidence that time had passed Coke by.

Coca-Cola responded to the challenge with the disastrous New Coke formula, which performed better in blind taste tests.

As Gladwell explains, the problem is that when people have just a sip of a drink in a taste test, they prefer a sweeter hit, something to amuse the bouche. But when they buy a case of soda to drink at home, they might prefer a flavor with less sweetness, more "balanced."

The brands have experimented with a number of ways to add vim without adding calories and now use aspartame in the U.S. market.

I noticed that my 7.5 fluid ounce (222 mL) can of Diet Pepsi had 22 mg of caffeine; the same size can of Diet Coke had 28 mg. I have little doubt that the drug affects the appeal. I remember being in a restaurant once and noticing that I felt happy, not absurdly happy but somewhat unaccountably happy, and realized I had had a few refills of Diet Coke and was probably cheered up by the drug. Caffeine probably wouldn't affect a quick taste test but might provide positive associations over time.

After struggling to distinguish the two colas when I knew what they were, I knew it would be a challenge drinking from the wrapped cans. After a few sips I thought the can on the Right was "more grapefruity?" I sensed that there was no way I could ever identify one unknown drink by itself, any difference between the two was faint. After a lot of sipping I decided that the Right can was Coke, with confidence of 75% (barely better than a 50% guess).

After a while the drinks were not as cold and maybe less fizzy and the Right can started tasting better, the Left can seemed to have more of the sour flavor. I changed my guess to Left = Coke with 60% confidence, which happened to be correct.

I conclude that, for me, the two diet colas are completely interchangeable.