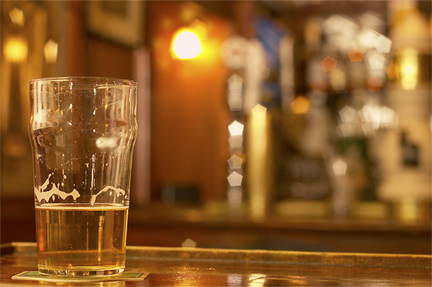 Flew a plane solo for the first time today! 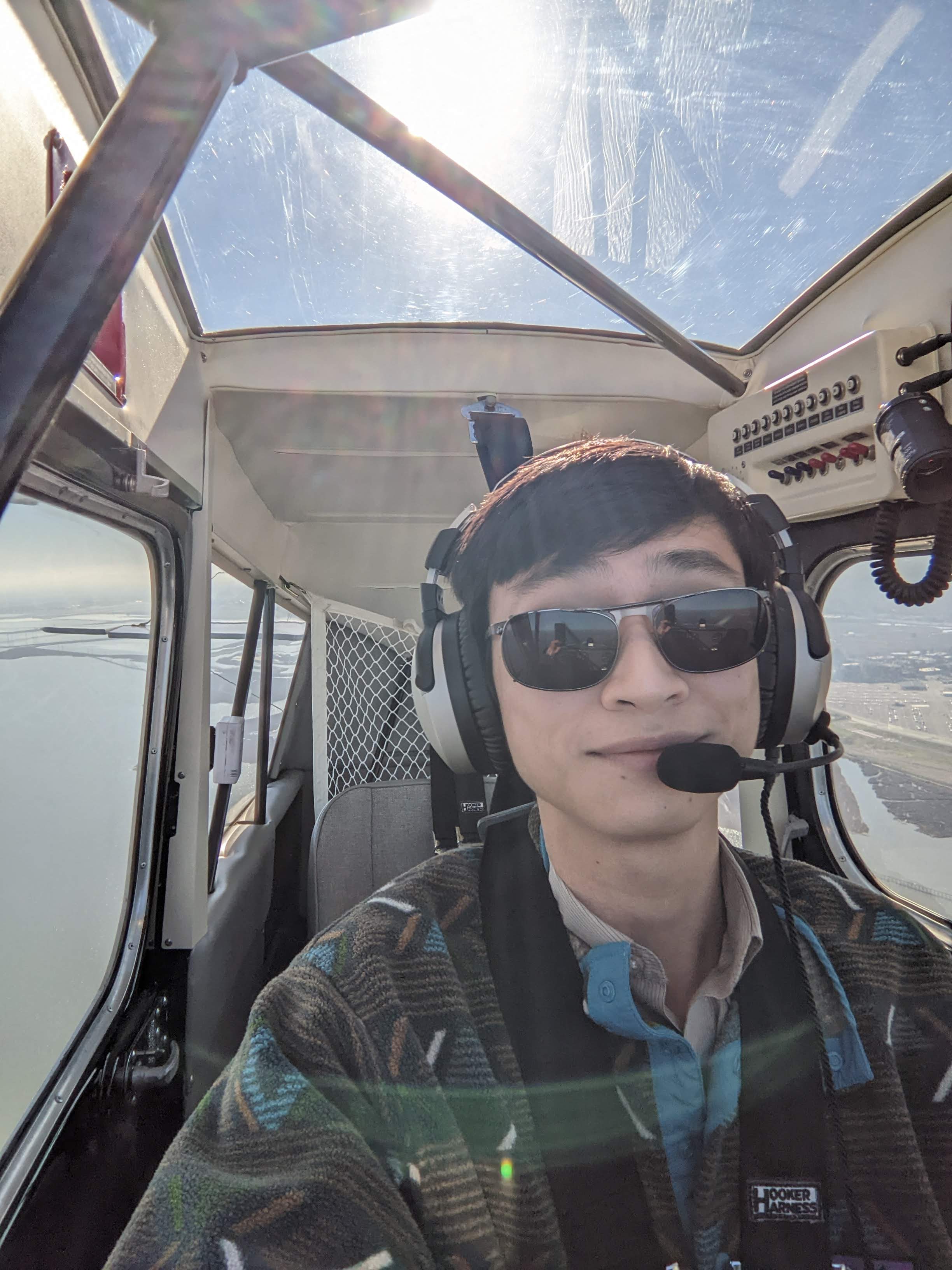 I've been learning to fly tailwheel airplanes for the past 6 months, flying roughly once a week. Now I've got 42.3 hours of flight time, with 0.5 hours of that now being PIC--pilot in command!

Frankly, flying solo was not as nerve-wracking as I expected it to be. I've been learning new things each lesson with my instructor, but I haven't had to be corrected on stick-and-rudder pure flying technique in a while, so I didn't feel the absence of my instructor's remarks. We flew a couple laps in the pattern (takeoffs and landings in loops, in the airport vicinity) and then he got out, took his stuff out of the plane, and sent me off! I did three landings (and one go-around), and that was that! I did get the feeling of "hey, I'm flying an airplane--by myself. sweet!"

This is the type of plane I fly, a Bellanca Citabria. Many of them are around 50 years old. Fabric wings and fuselage! Roughly 110 horsepower! a 4-cylinder engine with a carburetor! Two seats, in tandem (rather than side-by-side) 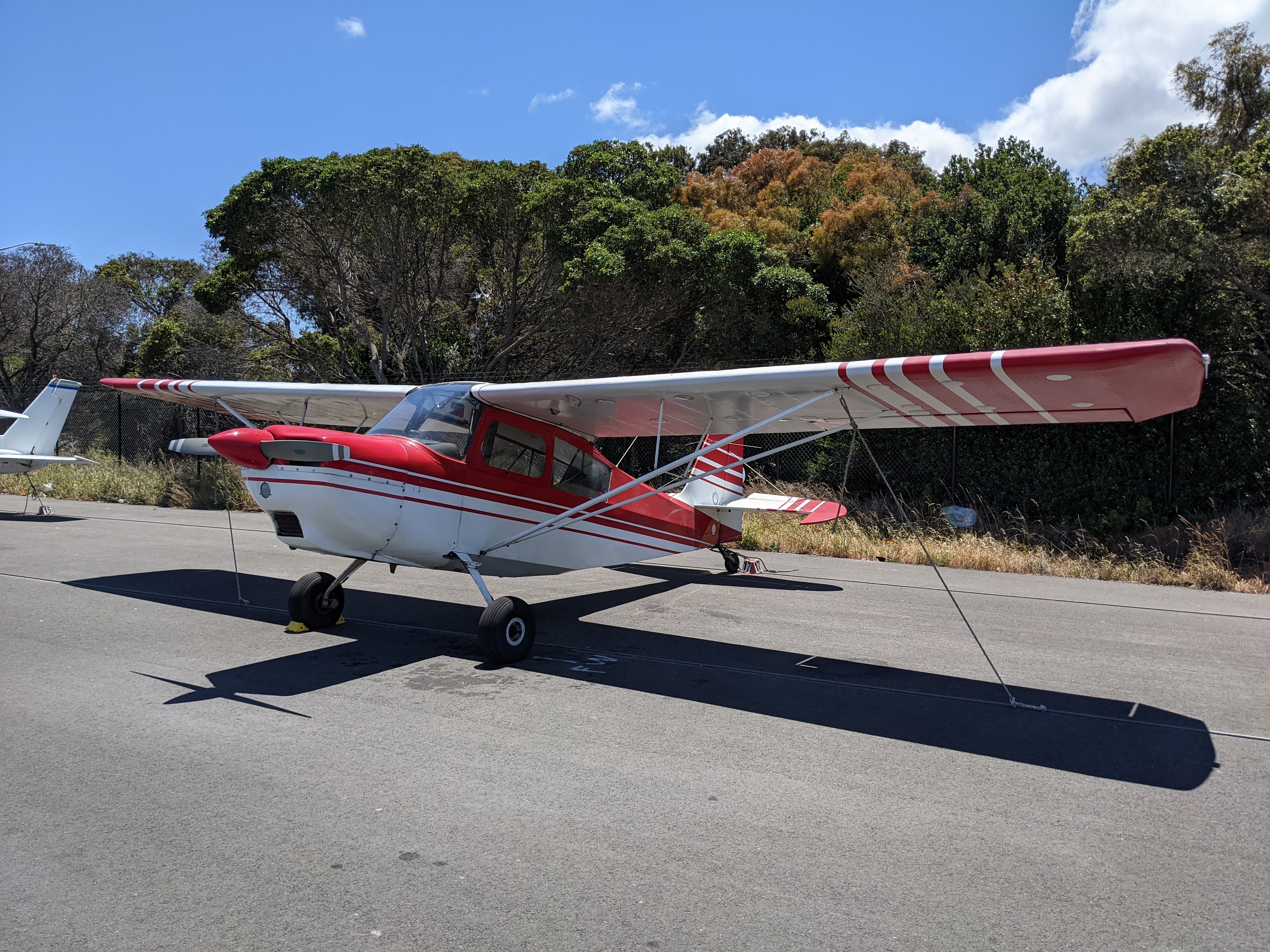 As you can see, the little wheel is in the back ('tailwheel')--it's a more traditional gear setup (most modern planes have a nosewheel) and is harder to fly (takeoffs and landings). The word on the street is that tailwheel pilots generally have better "stick and rudder" skills (i.e. flying technique). I can't really be the judge of that, but it's kind of the equivalent of learning to drive a manual/standard transmission car.

Because it's fairly straightforward for a tailwheel pilot to transition to nosewheel aircraft, and not the other way around, you must have a "tailwheel endorsement" on your license to fly tailwheel airplanes. I had to earn that endorsement (even though my license is a student license) to fly solo--so yes, I can do wheel landings. I've also gotten very proficient at performing slips, because there are no flaps on this model.

Here's what I see inside. Notice that there isn't even an attitude indicator (also called an artificial horizon)! (Yes, I've had to do my simulated instrument training "partial panel" by default, learning to fly the plane without looking outside and without an attitude indicator) 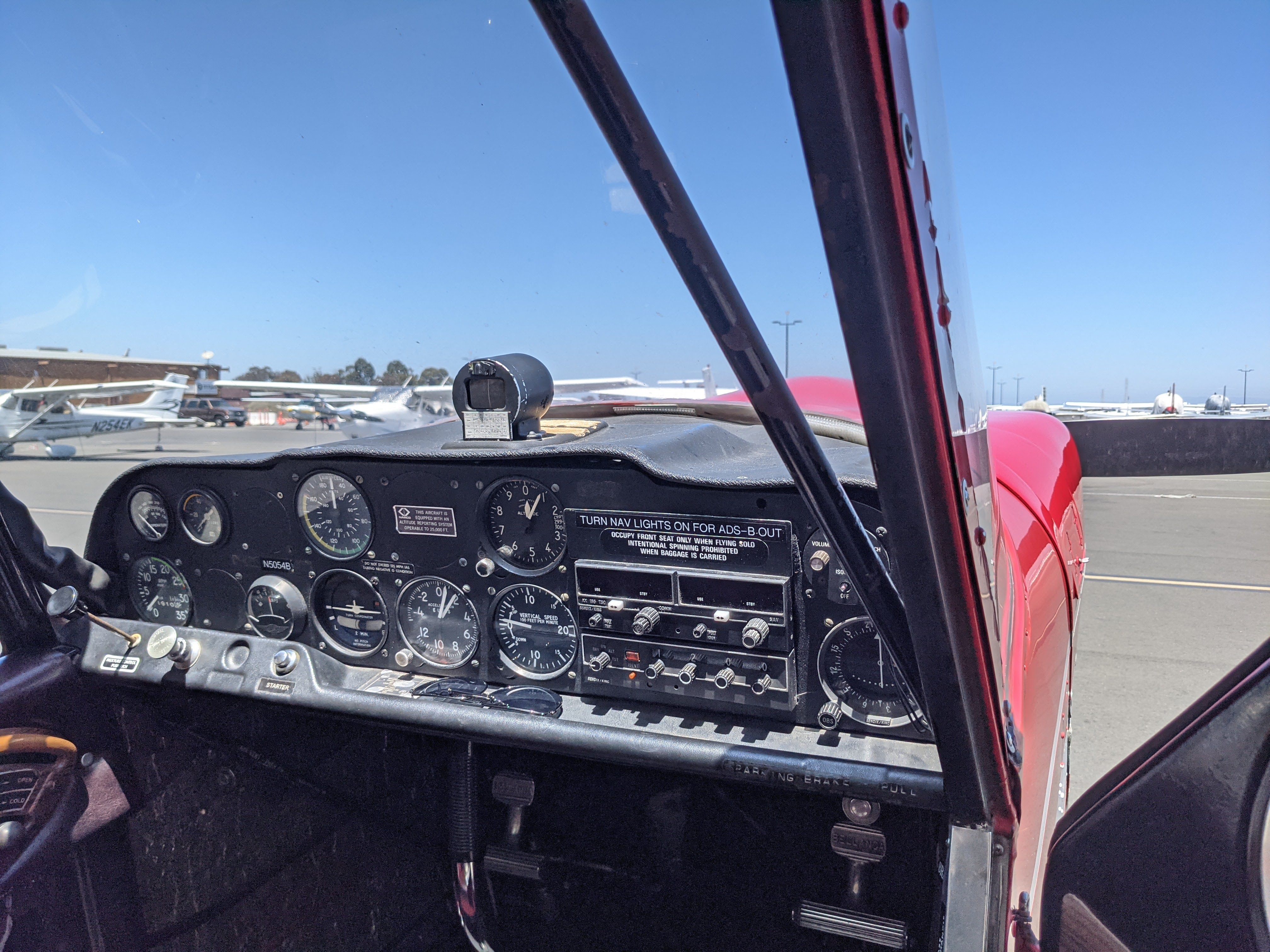 I can't wait for electric airplanes to become more common (https://www.diamondaircraft.com/en/service/electric-aircraft/ !!), but in the meantime I buy carbon offsets because the one thing that really makes me ambivalent about pursuing this as a hobby are its carbon emissions...

fantastic! I hope you'll post more about it if you have the time.

Feeling like shit, don’t think the seasonal funk ever hit me this hard. But we got a curfew and a gathering ban in place, while a good party would make me feel better. Most my energy is going towards not up and quitting my job to fuck off to Mexico for 3 months and wait out the winter there. I think I’ve been crying once a day lately. I’m not exited about seeing anyone or doing anything, including my friends. Everything sucks. While “objectively “ everything is fine and I’m crazy lucky compared to many people around.

Got my booster yesterday, and got lucky again with effectively no side-effects! My arm wasn't even sore.

My Christmas holiday was great, two weeks to decompress from the past months of hard work. The only downside is that the SO and I got a good ol' flu for a few days.

This weekend the SO and I did our Yearly Review, which were a bit more depressing for both of us than we'd expected. Last year felt like 50% lockdown/waiting for vaccines, 40% stress and 10% fun. Despite (or because of?) that conclusion, we did both find a lot of things we want to work on for next year. I got both of us a Theme System Journal which we've now filled with our themes and which I will use as a place to keep my weekly review and expand it with more concrete goals. I've picked the Year of Reinforcement as a theme; I want to strengthen the bonds between myself and the people around me, become stronger/healthier physically, and try to read more. Professionally, I now know clearly how I want to grow to a new level, and I want to do more to strenghten my professional network, to make time for meetings and get-togethers.

So I'm cautiously optimistic for 2022, although I can't deny that there's still a bit of "it can't be worse than last year, right? riiight??!?!

This keeps getting shittier

Some guy threatened to kick my ass last week. Over Snapchat. At 1:30am.

I had posted a video of me steaming out my car and made a "haha weed bro XD" joke. There was a considerable amount of water vapour being spewed given the temperature outside. Which apparently really set this guy off. I hadn't seen him in well over 3 years, haven't hung out with him in about 6... but he was also friends with some of my former friends and rock star friend's brother mentioned in an earlier post hence the ass-kicking. He had also been posting threats towards various institutions of government on his Snapchat story with the whole shaky-camera thing. About covid-19. The specific threats towards government, all I remember was "I will fuck you all up" but either way, dude was unhinged. My message was a little bit more personalized, called me a drug addict, one-eyed, no friends, an eff gee gee oh tee. None of it is true. The last time I was around any type of illegal drug was like I said, about three years ago when he was trying to sell it to me! And where did all these accusations come from? My rock star friend's older brother, who I will not SPEAK to. And who other people will not speak to, let alone accept an apology or repair the friendship.

I've been away from this group for about two years now and the stories I hear are just further tales of child-like dependency and self-destruction. My rock star friend's brother gets way too drunk at the start of a party. Breaks out to a chant saying "hot tub, hot tub, hot tub" to get everyone into it because he was so sad he missed out on previous acts of skinny dipping (da frick?). Then half the people leave in awkwardness, and the other half remaining get to sit in a hot tub with this dude while he (drunkenly) decides to start masturbating towards the couple at the other end of the hot tub, and next to my one friend going to grad school in politics. This was because he was emotionally frustrated that he had cheated on his (considerably younger...) girlfriend (they've all been considerably younger, starting with dating a tenth grader when he was in college (or community college for Americans). He lied that this girl he cheated on her with raped him, which, not to sound offensive or socially regressive, I'd be genuinely impressed if she pulled that off being half his size and about a third of his weight. Plus I know her, she went to the same church as my parents (good ol' Russian Orthodox community). My mother has split from that church given their covid-19 response.

This dude is about 26 years old, lives in his mom's house, blames everything on me, blames losing his friends on me (I was the first that left), and now, has decided to basically run around saying stuff to sketchier characters in town in the hopes one of them will drive out of town and kick my ass. Hence the threat. And I swear I saw a guy that looked just like his friend at the gas station. At this point? Do it! Come kick my ass! Come murder me! I dare you, I double dare you motherfucker! Fricking TRY to breach my compound. But you won't, because you're weak. Can't convince everyone I'm schizophrenic, or a drug addict, or an evil person, or turn people against me, so now you're tryna intimidate me Mafia-style. Good fucking luck with that!