The California Porsche fell through... sort of. I offered an earnest payment of $500 and the owner doubled it to $1000. Then they wanted a wire transfer to a branch of Wells Fargo that the Internet assures me is in Maryland. Then when I suggested escrow they argued we didn't need to put up with that (despite my offering to pay the fees). So I called up the dealership on the service records (which, after I got Internet Detective on them, were aliasing differently at the name and phone number than everywhere else; I could literally tell from the pixels) and said "I'm going to read off the name and phone number I have on some service records of yours. If they aren't the same on my copy as your copy, I suggest you contact the name on your copy and let them know someone is trying to sell their Porsche."

it took three or four iterations of this before the service manager understood I was attempting to do a good deed, not make them an unwitting third party to an internet car transaction (a position in which they'd been sued twice). Once he understood that I was acting out of altruism (or, more specifically, out of a desire to make internet scams harder to perpetrate thereby improving the ecosystem for all honest dealers) he became my new best friend. Called up the actual owner of the Porsche and asked him if he wanted my number so that I could transact with the actual owner. Upshot: the service manager of one of the largest Porsche dealerships on the West Coast thinks I'm a hero and I am in contact with the owner of the car, and the car is cherry (and heavily vouched for by the service manager, which is pretty damn ironic considering how much he bent over backwards not to endorse anything).

This took the better part of five days to hash out, though, during which time I tried to drive a beater '99 down the street. They wanted about double the going market rate. We sat in it, the aircon didn't work, the engine ran rough, and when I said "let's take this thing for a drive" the lot lizard said "not until you agree to purchase it." So I turned off the key and told him to fuck off. He said there was no need for profanity. I told him "no, but it feels goddamn good." I opined that if I were looking at a used Subaru for $27k they would have let me drive it without so much as signing a slip. They didn't disagree.

So on the one hand, I hit a dealer close to my house who thinks you need a mink stole and big chains to be worthy of driving an 18-year-old Carrera. And on the other hand I went to the spendy part of town and was encouraged to drive an 8-years-newer Carrera 4S, all 400HP of it, around residential corners at 30mph over the speed limit to see what the car could do. I was wearing a t-shirt from a graffiti collective and wearing jeans with paint spots on them.

I'm experiencing an identity crisis. It's ridiculous - the crazy Porsche could be mine for less than the price of a new Miata. I was on the verge of buying one in nice shape for less than a Kia Rio. The one in Cali? Less than what rd95 paid for his FR-S. But I become that guy.

I drive a '95 Dodge. Nobody thinks that's pretentious. When you get out of a '95 Dodge with a ponytail and paint on your jeans everybody knows you're Joe Dirt. Get out of a Porsche? Who are you trying to fool?

I ultimately decided against the spendy Porsche not because I can't afford it, but because it doesn't belong in my neighborhood. There's a totalled '05 Focus across the street and the hoighty-toighty car in the neighborhood is a new Civic sedan. Up the street around the corner? Late-model Lexii and Mercedes but they drive through as if they think they're going to be carjacked (twice nearly killing my daughter on her bicycle). I realized I'm going to feel less self-conscious about the Cali porsche because it'll be older and less assuming. But I'm still going to feel plenty self-conscious AND I FUCKING HATE IT.

It bothers me to no end that I feel guilty about having my kid doing daycare at a private school even though it's a non-profit and we're on scholarship and that I'm wracked with guilt over the thought of buying a 16-year-old sports car even though it costs less than a mutherfucking Prius. And I don't even know who to be mad at.

Took apart more watches last night. Everyone else got some ancient heavily-filigreed American pocket watch. I got "the Swiss." Which has no ornamentation on it anywhere, which is beat to shit, and is held in utter contempt by the instructors because it's "the swiss." To the instructors, the ultimate success is getting to shoot the moon and fix watches for Omega. The fact that I'm friends with the guy at Vacheron Constantin has gone unmentioned and undiscussed, I think because it's proof that I don't know my place.

My buddy with the kidney got laid off last week. Or, they tried to. They mentioned to him that it was an at-will state and they could do whatever they wanted. He mentioned that they probably don't want to expose themselves to that level of ADA complaint so now both sides are lawyering up and here I am having a metaphysical meltdown over buying a used car.

My daughter is 4. Day before yesterday, out of clear-blue silence, she said "My pants look like Jackson Pollack." She was right. They were very artfully covered in spatters and lines in primary colors.

On the one hand, I'm incredibly proud. On the other hand, I'm cognizant that she sounds like a Saturday Night Live skit about insufferable rich yuppies. WTF am I gonna do when she says it from the back of a 911 Carrera Cabriolet.

The Swiss wasn't completely without ornamentation. Apparently I'm the first person to discover this in 20 years of classes, but when you take the main bridge off and look real close you see this mark: 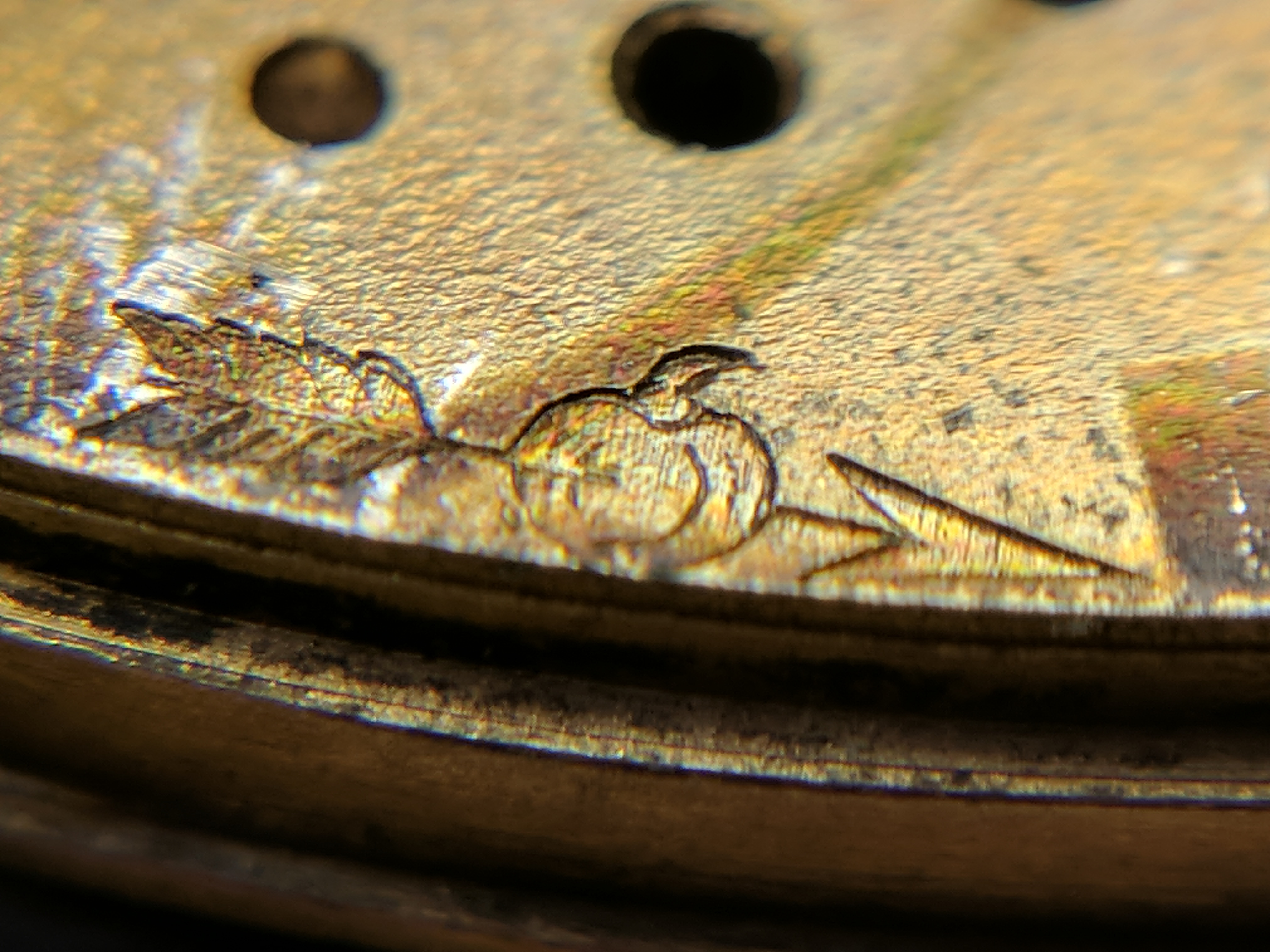 WIlliam Tell was Swiss, after all. Nobody knows what that mark is. I spent an hour on the Internet trying to find it. It's got a Reed regulator which means it's after 1886, once you take the 1868 patent and add 18 years. I'll say that "apple" "watch" "hallmark" are about the three least useful search terms in the world.

Have a rabbit hole.

That's a heck of a rabbit hole.

It appears to be something from Fabrique d'Horlogerie de Fontainemelon. 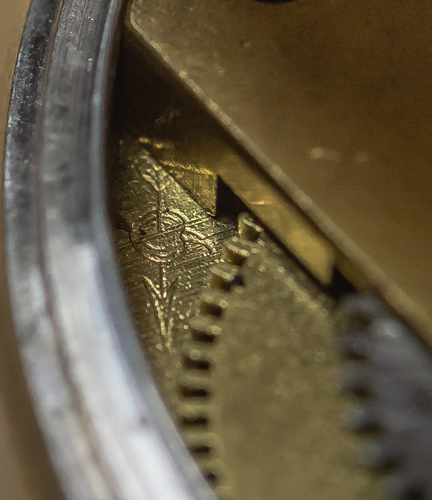 I still don't know how you found it. I don't see it on your Pinterest list. Nonetheless, FHF was the progenitor of ETA.

It's a fuckin' ETA before ETA was ETA.

Heh, I may have left out a step. I had so many tabs open I couldn't find my way back to the Pub.

DUDE I think I found it!?

It looks a lot like the Fontainemelon trademark that you see twice in this list, registered in 1880 for the region in Switzerland. Found this by Googling 'Schweiz uhrwerk apfel' and it was the first hit. It actually does lead back to that site of yours when you Google for Fabrique d'Horlogerie de Fontainemelon SA. Check that advert, it has the logo! Fuckin' badges for everyone.

What's fuckin' weird is that the FHF logo is backwards from what I saw. So... is it a fake FHF? WHY WOULD YOU DO THAT

It's a 13-jewel movement with a counterbalanced pallet fork, but it's the least ornamented caliber I've ever seen.

Fuck. I'm thinking about buying a house before selling my condo mostly because it's just so much easier than dealing with showings while living here. I don't know how I got in this position, but I did. I'm self-conscious about it and don't know what to do about it. The only people I can kind of talk about it with is coworkers, but even that's hit-or-miss depending on their own personal lives as children and other obligations may not give them as much flexibility.

And at the same time I constantly worry it will all come crashing down. But then I read articles about most people not knowing how they'd pay for an unexpected $500 expense, and it's like, what right do I have to worry if my income will remain? Or if I should buy a house?

My dad is with this lady. Has been for like six years. She's a low-level office flack at the job he used to work. Makes about $38k a year.

In the runup to the 2008 crash she bought five houses.

She's still underwater on all of them.

How does she pay for them? She doesn't. My dad does.

Damn. The timing. fistbumps back.

Guilt is a useful thing. Having an overly sensitive guilt function can be debilitating. I think your situation is a little tougher because you have more fun money. Granted... I was essentially just gifted a house. Out of a taxpayer funded subsidy program. That came about because of the '08 crisis. Caused in part (I'm guessing) by Morgan Stanley.

What would winning guilt free look like? There's hardly such a thing as totally independent bootstrap-pulling. There's just the suburbs where you're aren't daily reminded of the slow decay of Western society.

My financial planner pointed out that country clubs exist so that you can hang out with people who don't remind you every day that Porsches are for rich posers. Not the exact terminology he used, but effectively that: "We wall ourselves off from your suffering because we want to enjoy our success in peace."

Our 30-year mortgage became a 15-year mortgage because TARP. The bank knew if they gave the money to the people who needed it they'd never see it again so they gave it to us because they had to get rid of it somehow. Saved me about $75k, and I had to chase them off three times before I listened. And I only listened because the above financial planner let me in on the scam.

It's really hilarious that you think my porsche selection problems are somehow "tough". Some friends asked how I was doing the other night. I said "I want a Porsche convertible but I only have a 1-car garage." They said "you're doing fine, then." I said "If more people had my problems the world would be a happier place."

It's really hilarious that you think my porsche selection problems are somehow "tough".

It is probably a softhearted projection of mine. I verbally hand-wring when I'm going through something tough, and by column inches I took your pains to be quite large. =)

I hashed it out with my cousin over pizza and beer. I'm a long way from settled but I was able to have pizza and beer for lunch on a wednesday so again, not having it so rough.

It bothers me to no end that I feel guilty about having my kid doing daycare at a private school even though it's a non-profit and we're on scholarship and that I'm wracked with guilt over the thought of buying a 16-year-old sports car even though it costs less than a mutherfucking Prius. And I don't even know who to be mad at.

Hmm. Why feel guilty about the private school thing? Especially since it's a nonprofit which I'm sure is doing a lot of good work for the community it serves (or, at least, I hope it is). The Porsche thing I can kind of understand, given appearances.