There is no FUCKING way this is ever going to be more than a vanity project, and I can tell you the exact moment I came to that conclusion. Back in the original video they run a cat back-loader over the panels to show how strong they are. This is the exact moment I knew they were full of shit. tracked vehicles have a lower pressure per square inch on the medium they traverse and spread the weight over a much larger are than tires do.

On top of the fact that cars will block the sunlight causing rolling voltage waves, cars drop oil and gas, not to mention dirt and garbage, and that as soon as a fully loaded tractor trailer slams on the brakes on these things, the corners in the hexagons will turn to dust and disintegrate.

Want to know why basic science education is so important? GOVERNMENTS ARE GIVING THESE PEOPLE MONEY. For a product that will NEVER deliver on its vision. Not NEVER as in it needs a solid business plan never, but as in NEVER as in material science and electrical engineering dictate that this will never work at a logical pricepoint. For the same money you can cover the interstates and generate more power for less money.

I dunno... like any new technology, I always figured the Solar Roadways idea would first be implemented in public pedestrian areas, and then maybe bike paths, and then parking lots, and finally some limited use in roads on private property... like the parking lots and roads around college or corporate campuses.

Start small. Try some shit out. When it breaks, figure out why it broke, and iterate. Then do it again.

And, honestly, it seems like they are doing just that.

Did they way over-promise, and under-deliver? Sure. But the Apple I sucked balls, had wires sticking out everywhere, and didn't have any software. And now I type this on a MacBook that is the result of decades of innovation and iteration.

Will we ever build a freeway out of glass hexagons that suck down some solar energy? No. Probably not. (Although you can bet the Dutch will. They always do cool technical public-works projects.)

Here's a late-middle-aged couple in Idaho, who built their Apple I, and everyone expected Elon Musk-style flash and bang and zip and polish... and what they built kinda worked a little, but they made some really amateurish errors and assumptions, and way over-promised.

Then they owned up to it. Talked about what went wrong, and what they learned, and didn't get defeated.

Aren't they just another pair of entrepreneurs with big audacious goals, built on the promise of a prototype they made?

I really don't understand why they get so much hate. They shot for the Moon, and the rocket fizzled on the platform. So what? That happens a LOT. The thing that separates the fizzles on the platform, and the history-making Moon-shots, are diligence, persistence, and a willingness to keep working down the problems until you have something great.

I really don't see anything different here than any other alpha-stage product development experience.

I really don't see anything different here than any other alpha-stage product development experience.

I'm currently doing a project at my university where we dive deep into the Hyperloop technology. Essentially, we're doing research to see if it is The Next Big Thing® or yet another technology-driven fata morgana. After talking to a bunch of technology and transportation experts, I realized that new innovation need to do two things to be successful: they need to be sufficiently promising in their core technology and in their implementation.

There is a balance to be found between the cynical "I'll see it when it happens" and the naive "We're gonna solve all issues", even (or maybe especially) with alpha products. In order for me to have some faith in their success, I don't need them to have solutions to all the pitfalls I mentioned. But what I am looking for is whether they've reduced the solution space enough to make finding a solution likely. Whether they have a good idea of how they're gonna solve it, even though they haven't solved it yet.

Self-driving cars, for example, still have to find a solution to operating in bad weather conditions. While it still hasn't been solved, there are a few good ideas floating around that might solve it. There's the promise of a solution. The Hyperloop on the other hand needs high-capacity switches and stations connected to other modes to work from a transportation and logistics perspective. So far, I haven't seen a convincing enough attempts at solving those problems, which means that I'm still quite reluctant about its potential success.

I admire their engineering spirit and I hope their project goes well. But if I can point out critical flaws in their design with only cursory knowledge of engineering and three years later there's this:

The prototype appears to be plagued by drainage issues, poor manufacturing controls and fundamental design flaws. Every single promise made about the prototype seems to have fallen flat

...I will call a spade a spade. They haven't really come closer to a design that isn't critically flawed, which is what alpha development is all about.

This should've been a fun hobby for two people who want to learn more about engineering and who want to share that with the world. And that's cool. What it didn't need was the millions of dollars, press, audacious claims and hype that was drummed up around it.

The Apple I was only made because Jobs sold his car. They bootstrapped their way to their minimum-viable-product. These people raised $850,000 from the DOT before their $2.2 million Kickstarter. Don't you think that $850k would have been enough to solve any of the below promises?

My reply to my dad who was looking into this was as follows:

Art students and the marketing department should not do engineering.

I stand by that statement.

I always figured the Solar Roadways idea would first be implemented in public pedestrian areas, and then maybe bike paths, and then parking lots, and finally some limited use in roads on private property... like the parking lots and roads around college or corporate campuses.

why not just put solar panels over parking lots?

You know what the procedure is to fix a diesel oil spill? They dump fine grade sand on the spill then scoop up the sand with the fuel. Now, think for a second. Cars, running over a fine grade sand with a binder on your fancy glass panels. These things will need to be swapped out every time there is a fuel spill.

That is even before we get to the nonsense of putting a solar panel on a surface that is going to have objects blocking the sun most of the day. Then the cracks in the panel will allow water into the roadbed (this is bad).

I'm pretty sure the post veen linked is the one that made theadvancedapes mute me. Fans of technology rarely like to hear why it will fail.

I pitched a couple of bucks towards the project because I saw several other implementations of the exact same ideas work at Burning Man... a pathway that was lit by solar power, reacted to people walking on it, and involved interesting materials, science, electronics, and human interaction.

And two of those projects survived the highly alkaline desert environment, and went back to Burning Man several times.

So yeah... the technology works. It's not magic like cold fusion.

But like I said in my other comment, I always saw this as a pedestrian thing, maybe with limited use on non-commercial-vehicle roads (like bike paths, parking lots, etc.).

So yeah. I have seen similar projects work, and work pretty well. I was hoping that instead of an "artist" building an "art installation", something with proper funding would come up with something more resilient and commercially viable.

I still hold that hope.

Hell... how long has Moller been at it?

There's a difference between exhibition-grade technology and installation-grade technology. I remember at InfoCOMM 2001 Pioneer made the entire floor of their booth out of 42" plasma TVs covered in Lexan. It was damn impressive. it dusted the shit out of the magic floor in Saturday Night Fever. And it only lost a panel or two over the space of three days. Of course it works. It's damn solar panels. We've been launching them into space for over 60 years. What's increased over the past six decades isn't so much "technology" as "technological hubris."

"Temporarily babysat for a week at a festival" has virtually nothing to do with "Permanently installed at an unmanned location". You can do all sorts of dumb shit when the install doesn't have to outlive an open container of yogurt. Things get a little dicier in the land of "light fuse walk away."

As an aside, this is the first time I've seen Moller held up as a positive example of anything.

Yup. And that's exactly the point I made, that nobody seems to be getting.

Meh. I don't actually care enough to type any more on the subject.

Credit where credit is due. Noice.

Consider also the engineering challenges of developing a product meant to function very remotely but still very much in the public realm. Make sure people can't steal your trade secrets, make sure there aren't any security vulnerabilities. Maybe a quick analysis shows it's most cost-effective to include a massive surveillance system for the first decade of solar roadway attempts. Certainly for now, while there are still "cords".

The need to consolidate our different infrastructures like this depends on the demands of civilization and the competing technologies. If we can get fusion going, there's going to be much less of a need to make the world a solar panel. I think it's probably 35 years or so before we have a distributable product. I wonder if we'll end up covering enough of the Earth's surface with panels to make a measurable offset in the current warming trends in the meantime. Doubtful.

I believe it to be only a matter of time/money: 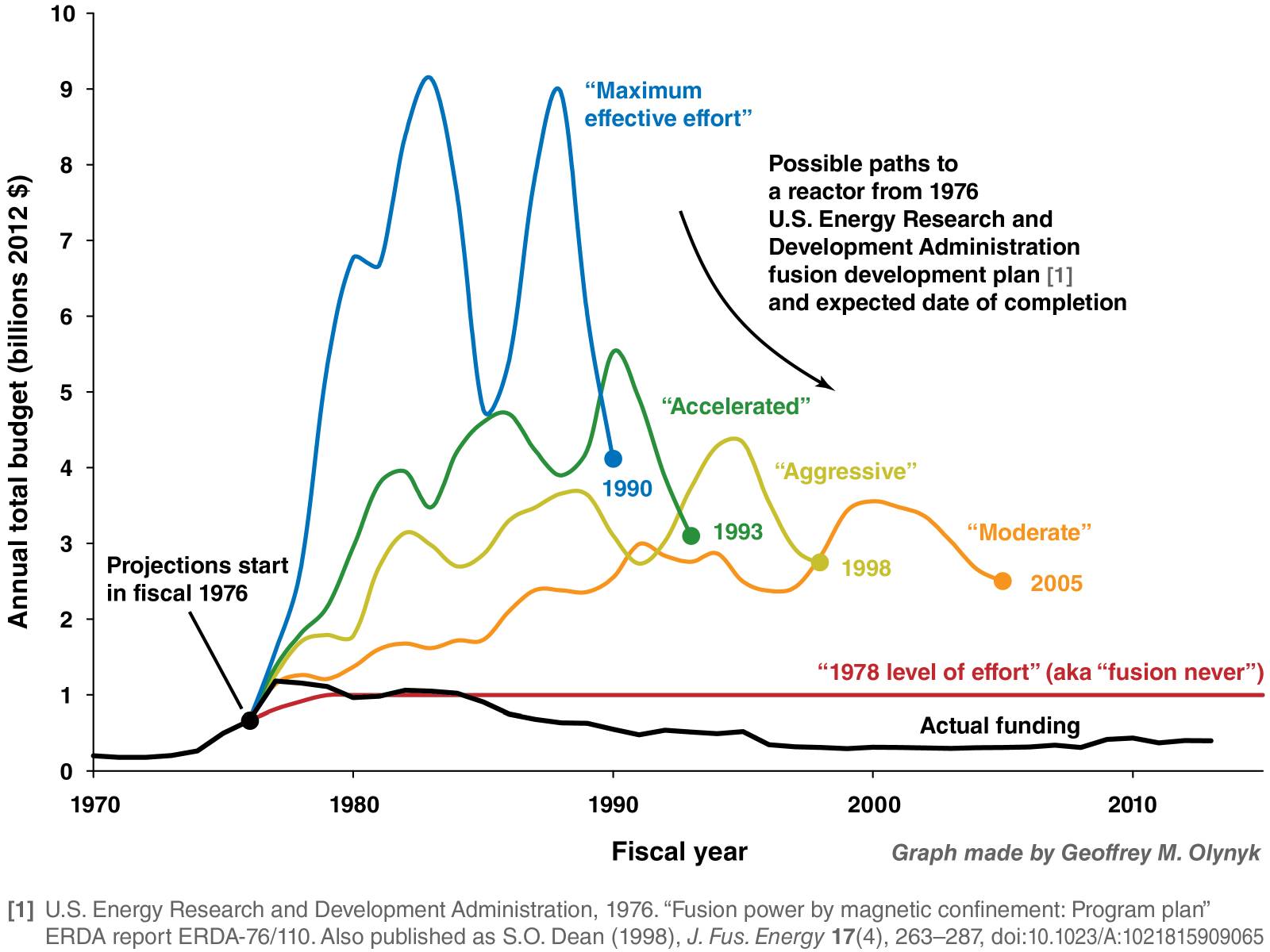 Solar roadways is an absolutely bad concept, there is no "learning" to do to make them work. They will always just suck.

I never got this idea. It's all very much like when Apple removed the headphone jack. Eliminating an existing, viable technology (asphalt is durable and super recyclable) just because it's old/uncool/whatever. Stick solar panels on rooftops and you'll do much better anyway.