This is the fourth State of Hubski post. We are 28 in dog years.

I have no defined intentions for this place beyond enabling thoughtful interaction. However, something else has transpired. Whether it was the IRCs, the meetups, #grubski, 103 #weeklymusicthreads, #pubski, or just a critical mass of comments and posts, many of us interact in ways that transcend Hubski itself.

We remain a small, yet uniquely vibrant corner of the internet. I’ve met many of you face to face, and each time, the conversation felt too short.

There is a spirit to Hubski.

There were less Hubski Updates this year. That was not due to a lack of activity. forwardslash and insomniasexx have been toiling away at a complete rewrite of the site. For our "second job" team, the task has been a heavy one. However, there now exists an alternate version of Hubski, and it is written in Scala and Node.js. Expect an invite to test and break it in the month of January.

It was a difficult decision to channel so much of our limited resources into a rewrite. We have a number of Hubski Updates in the queue, and it has been painful to delay them. I am very excited about one update in particular, and I am glad that 2015 will see its implementation.*

We are also excited about the robust API that the new Hubski features.

On a call a few weeks ago, the Hubski team started talking about new stickers. We had an idea, and immediately contacted sounds_sound, as we agreed that he could pull it off best. The next Hubski sticker aligns well with my thoughts and feelings regarding Hubski of 2014. 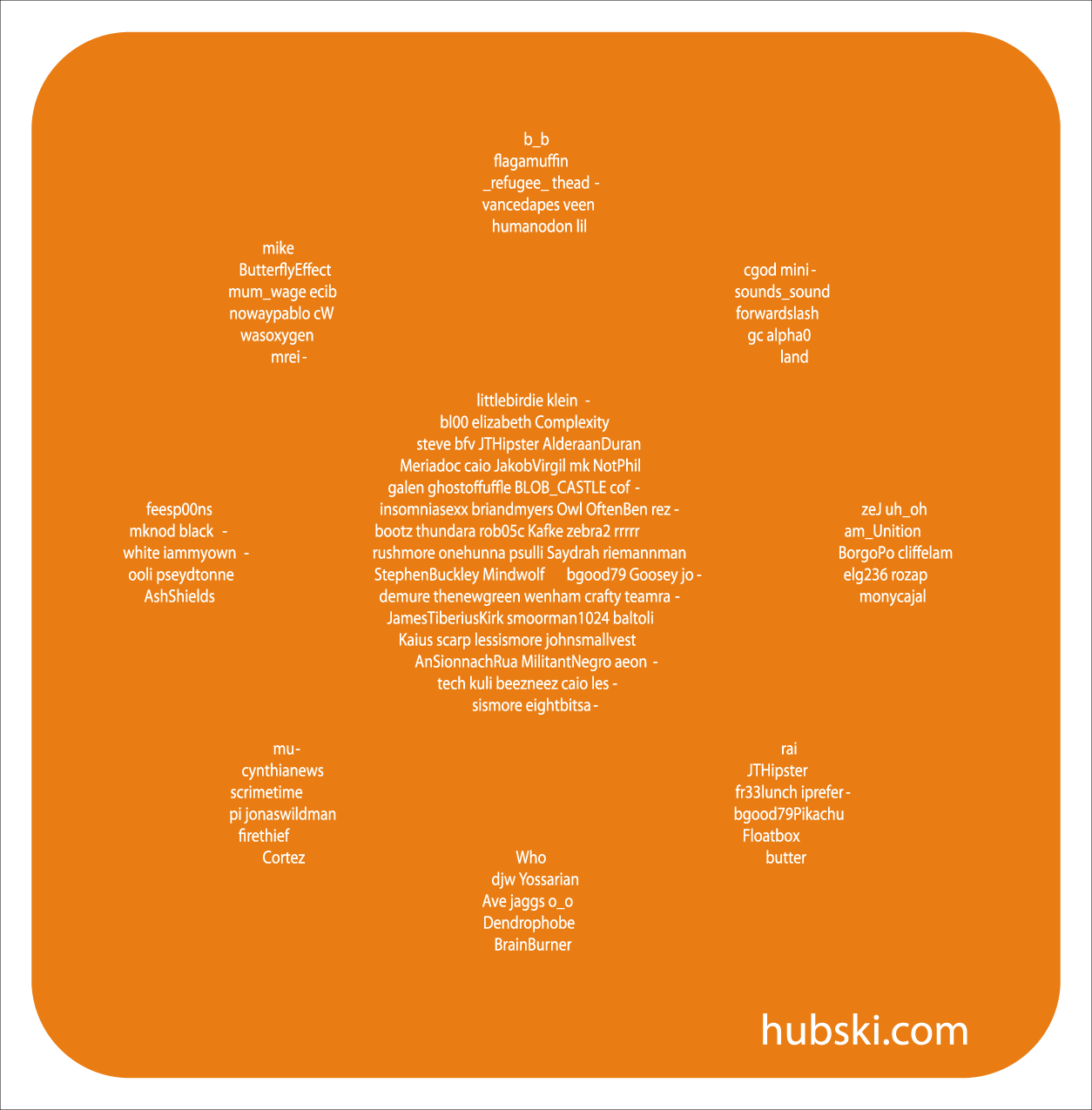 The State of Hubski is good this New Years Eve of 2014. Thank you for being a part of it.

It has nothing to do with tags.**

Happy New Year from Hong Kong! I've put up about 100 stickers so far all over the city.

It's actually 1pm here now..on the 1st. While most of you are getting your slosh on, my hangovers already gone. Boo-ya!

Thank you all for another amazing year.

I personally cannot wait to get rid of all the tags on hubski! WOOO HOOOO! :P

I'll be in HK in April. My whole goal for the trip no is to find one of your stickers.

I'm going to try to hide some for you somewhere. I assume most will be taken down very quickly. Hong Kong has very few stickers and stuff up anywhere. Very clean city relatively speaking.

I have been hitting up little bar bathrooms with them as I feel like they'll survive. I ducked up last night by putting it on the wall in front of the toilet but forgetting I was in the men's room. I only realized after that literally no one will see it unless there are guys who take dumps in disgusting dive bar bathrooms.

I'll throw some pins on the map of where we've been when I get a chance. I'll have some recommendations for you as well. We're at a very upscale hotel with a bar called sugar waiting for it to open. I'll let you know how the view is in 15 minutes.

I only realized after that literally no one will see it unless there are guys who take dumps in disgusting dive bar bathrooms.

Unfortunately there are, and they aren't all hand-washers.

I should add that I wish the sticker could have held the name of everyone that has posted non-auto parts spam to the site. The sticker contains the most recently badged usernames.

The state of Hubski is "good" indeed. Thank you to all of you that nurture the site, every day. You know who you are.

This place is about people, without you it doesn't exist.

Want to do the impossible? Start a successful social aggregator. Guess what? It cannot happen unless you can get people to care about it as much as you do. That's really, really hard. What makes a site like Hubski worth caring about? The people. How do you attract the people that are worth caring about? -Fuck if I know.

Seriously, I'm not kidding. There is no secret recipe on how to do this. We made certain decisions along the way that helped steer the right people (YOU) here, but much of it was likely serendipitous.

I love you Hubski, you're such a kick-ass part of my world.

edit: I think it's important to reiterate that we've never had more effort going in to the development of Hubski. I only mention it because its not yet evident, but It will be. I think you'll all be really glad for the efforts insomniasexx and forwardslash are putting forth. Also, you should know that these efforts are born of the suggestions you have put forth.

Is it killing you that the markup is glitching? ;-)

This is a special place. You've all done an incredible job. I'd badge this post but it feels kind of like donating a c-note to the treasury.

Fixed. You saw it before you were supposed to.

I'm a little surprised no one has chimed in with, "That's no Hubski center, that's a space station." (Please tell me I'm not the only one who thinks the un-justified text make it look like the Death Star.)

Thanks for all you do, ladies and gents. :)

No, you are right. We recognized and appreciated the Death Star quality.

Are you killing tags?! But I've carefully curated my OC and everything...

Just kidding guys I'm tipsy and getting drunk at a Gogol bordello concert. Too many drinks in my...er, lap.

So long as you keep fixin' my bugskis and don't let anything too good die, I [remain] good. I want those stickers more than I've wanted anything in a while. I'll happily contribute to the fund - let me know.

However, something else has transpired. Whether it was the IRCs, the meetups, #grubski, 103 #weeklymusicthreads, #pubski, or just a critical mass of comments and posts, many of us interact in ways that transcend Hubski itself.

Spot-on. Hubski has been an interesting place because of that, I feel like a know a lot of you personally despite never having met many of you. Even though most people here are usernames and text at face value I feel like it goes well beyond that, into the realm of caring about each other and community.

Which likely explains why there's so much advice and life-lessons, anecdotes, and all that being given on a near-daily basis. Along with explaining why it takes time for people to become used to Hubski.

Happy end of 2014 everyone, looking forward to seeing who joins in 2015, participating in more Pubski/Weeklymusic/maybe Grubski (those are a bit intimidating) and whatever else is in store around here for 2015. Hoping to meet more of you too!

...and looking forward to getting some of those stickers because I love them. Thanks for the hard work to everyone that keeps this site running and evolving.

Here, here! I'm excited for what you have in store bfx! You're moving to an entirely new place, with new people, new experiences, new restaurants, a new bed, new windows with new views, new favorite coffee shops, new favorite record stores, new favorite EVERTYTING! -How awesome is that? Embrace it!! I look forward to the progress reports.

So I don't want to go all sentimental on you but hubski is a really, really wonderful place. It is one of the few places on the internet were people are people and not usernames. It exists in this weird place of anonymity and caring and community.

Also, the fact that hubski made me quit reddit is a godsend. I am terrible at time-management and procrastinate constantly. So although I haven't been on here for basically the whole term hubski has still had a positive impact on my life.

I'm in great company up there. Hard not to be, I guess.

Also, I think before that becomes a printable sticker someone should wiggle the usernames around until none of them need to be hyphenated. Shouldn't be hard.

I think that ship has sailed. insomniasexx?

They never responded to me after I sent them revised one. I assume they are on break for holidays. I could attempt to send them another updated version....