"Again, I fall hard in the best interest of large corporations. I am no longer the Editorial Cartoonist for Farm News due to the attached cartoon which was published yesterday. Apparently a large company affiliated with one of the corporations mentioned in the cartoon was insulted and cancelled their advertisement with the paper, thus, resulting in the reprimand of my editor and cancellation of its Friday cartoons after 21 years of service and over 1,090 published cartoons to over 24,000 households per week in 33 counties of Iowa.

"I did my research and only submitted the facts in my cartoon.

"That's okay, hopefully my children and my grandchildren will see that this last cartoon published by Farm News out of Fort Dodge, Iowa, will shine light on how fragile our rights to free speech and free press really are in the county." 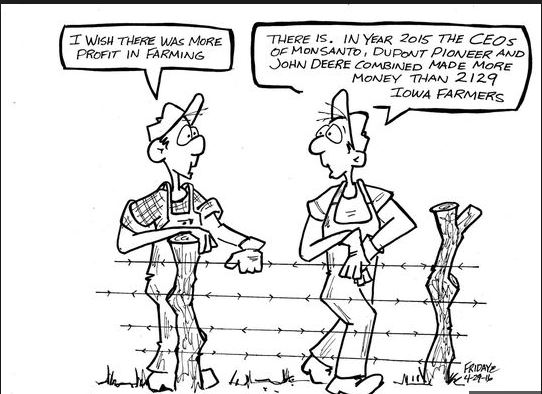 We just wanted to reach out and reiterate that we value open discourse and conversation. We also believe that a little humor and the ability to laugh at ourselves goes a long way. As you may know, we weren’t aware of the cartoon until Monday, May 2 and we had no part in your departure from Farm News. We appreciate anyone who speaks out on behalf of farmers.

Things get sticky when it comes to journalism. On the one hand, it's a for-profit, commercial venture. On the other hand, it's a for-profit, commercial venture whose civic duty is to provide critique and criticism of the actions of those in power. In the US, the classic example of cartoons and political freedom is Tammany Hall and Thomas Nast, whereby a large organization with monolithic control over much of the state apparatus around them was brought down by a cartoonist. Another example would be the lack of criticism of any Hearst-owned property by the papers of William Randolph Hearst.

The argument is this: it may offend the sponsor to be criticized, and it may be within the rights of the publisher to terminate the cartoonist... but it does not serve the interests of the subscribers for their content to only be that which is approved by the sponsors. Obviously, pretty much every journalistic organization deals with this on some level; this is, chapter and verse, the definition of editorial independence.

You're right. The sponsor can do whatever the fuck he wants to do. The editor, on the other hand, is supposed to protect his journalists. In this case, he didn't.

There was a Japanese scientist who had me build him some stuff for a rocket once, and one day, he went into the machine shop with me. American machinists are notoriously lewd and whatnot, so after he said "ohh, I like this, I really like this" about an intricate part that they had made, one of them says "well, Haruto, when we like something a lot, here in America, we say, 'that's the shit!' ". So the scientist says "Shit? What means shit?", and some of them are making the face ya do when you don't wanna "lose your shit", but the machinist comes back and says "It's just really good... stuff. Anything, really". The scientist thanks them for this lesson, and we leave.

Of course, less than a minute later, I had to tell him not to ever use that in a professional setting, and explain that it is a crude, explicit term. But to this day, the idea of being there, in the crowd, when he innocently exclaims that his data is "the shit", at a conference... hilarious, but I just can't do that to the guy.

It goes to the concept of the Fourth Estate - the argument is that the press, as the ears and voice of the people, has an obligation to defend the interests of the people against the other three estates (the clergy, the nobility and the commoners or the executive, the legislative and the judicial depending on who's counting). There's a reason the press in the United States enjoys a lot of freedom - the argument is that a free and functional press is a check on power against the government.

"Editorial" in English means both "proper construction and content" AND "position taken in an argument." The "editorial pages" in a newspaper are where the staff members write opinion pieces, often to augment the reportage of their newspaper. So. A copy editor? Makes the grammar and phrasing better. A content editor? Steers the story or novel or article. An "editorial board?" Decides what formal position the paper takes on political and news issues. So when you see an article saying something like "the libertarian whackadoo has gotten more editorial endorsements than Trump" they're not talking about proofreaders, they're talking about the upper-level people at the paper who issue proclamations, positions and recommendations in their role as member of the fourth estate.