It sucks that stuff like this happens, but very few of us can say that they never take part in this kind of shaming. I certainly do on occasion. She even said she did. It's just kind of human nature, as bad as it is. Which explains the shock people feel when they realize that every picture, every comment, every post on the internet came from an actual human being.

What I think is funny is that, personally, this picture isn't near what comes on up from some people. It's a girl in a costume for Halloween, and she probably had fun that night. It's really not that bad, and it got such mean comments. I cannot imagine what thoughts someone has when a picture goes viral of them having an accident or taking part in something they're not proud of. The comments could be absolutely destructive to an already teetering self-confidence.

I think you're right that most of us would have chuckled at and maybe even shared a photo like this, but the hateful comments are a lot rarer to common and decent people. Stuff like "Heifers like her should be put down" is just so monsterous it takes a real asshole to post something like that in public.

I remember thinking that he looked like he was having a real good time in that video. That would be a hell of a burden to carry. Depending on what kind of law he practices, that experience could be an asset though.

Good read. That reminded me of this other interesting article.

Man, this really resonated with me. One of my pictures went somewhat viral (became a meme) about 2 years ago and I have had really mixed emotions about it. Mine wasn't even bad - just a mildly amusing, slightly embarrassing picture of myself. I consider myself pretty thick-skinned & generally don't get butthurt about a few jokes at my expense, but some of the hateful shit people posted could make anyone insecure. I'm just glad there were only a few - I can't imagine what this girl went through.

I can't imagine being a poster boy for whatever the meme represents, whether positive or negative. The amount of scrutiny an image goes through when viewed by so many people...glad your experience was at least tolerable.

On a related note, there was a kid I knew in my teens, heavy set kid with obvious confidence issues and in turn ended up being a relatively unpleasant guy from my minor experience. Never held anything against him really, though as the mean kids we are, he was definitely the butt of a few jokes. Anyways, several years later I remember browsing google images and finding his face(from youth) on a negative meme. That was a really weird moment. I initially laughed, but it was strange. As badly as I wanted to share with a few friends I personally didn't want it to spread. Maturity/respect I guess? I was also happy it wasn't me as my youth wasn't pretty either. So strange when things are turned to a more personal perspective. Thankfully I never saw it again.

Good on you for not sharing it.

I used to make fun of people in middle school; looking back on it just fills me with regret though. It took someone I mocked to start crying before I even realized how mean I was being. I do try to be a better person on the outside, but I can't help but having cruel thoughts every now and again.

While I don't shame or harass people like this, I do comment and mention that people should cosplay the characters that are most similar to them. Doesn't matter what your weight/height/gender/etc is. If you can't pull off the character, you can't pull them off.

It's the same as when you see a really muscular/manly dude try to cosplay a tiny feminine female character. It just doesn't work, and those people get "internet famous" because it looks ridiculous.

I see no problem dressing up however you'd like (I actually encourage it), but cosplaying IMO requires a bit more planning and matching bodies.

That said, I've done my own horrible cosplay gone wrong. I thought I was pretty cool at the time, but thinking back, I would've done a lot differently. And there's no reason to shame someone just because they don't have the best cosplay.

Let me ask you, then: who should this woman have cosplayed, that would have fit her body type? Off the top of my head, I can't think of any major characters, male or female, that match her body shape. The reasons for this are pretty obviously tied to our cultural conceptions of beauty—women should be slender and curvy. There's obviously some exceptions, but most are still of a pretty average build.

Should she be disallowed from the hobby, or ridiculed for doing something she enjoys, just for this?

Caitlin describes Lara Croft as "feminine but dangerous, well-educated but athletic". By dressing as her, becoming her, she's taking on some of those traits. If it boosts her morale, if it makes her feel better about herself, because she is sees herself in that way, or is acting in that manner, why should she let her weight and build be a barrier to positive mental health?

Let me ask you, then: who should this woman have cosplayed, that would have fit her body type?

It's hard to say. Similar with the situation of black people, there aren't that many video game characters (or anime characters) that match.

The reasons for this are pretty obviously tied to our cultural conceptions of beauty—women should be slender and curvy. There's obviously some exceptions, but most are still of a pretty average build.

I definitely agree. I never said otherwise. Some characters are quite impossible to cosplay accurately, no matter who you are.

Should she be disallowed from the hobby, or ridiculed for doing something she enjoys, just for this?

I never said disallowed. Nor did I say that she should be shamed/ridiculed. I mentioned this in my post. I'm supportive of people dressing how they want to dress. That's not the issue. The issue is that cosplay (to me at least) implies you are trying to be that character. Hence dressing as them and (in extreme cases) role playing them. The more differences there are between you and that character, the more you have failed. And people should note this when they do cosplay. Because there are people who will ridicule them. There shouldn't be, but there is.

Honestly, I'm even disgusted when thin people cosplay fat characters and then get applause and cheered on. Or when the details of the costume are off (person is holding the sword in their right hand for a left handed character). Detail matters. Even if it is something that people find sensitive about themselves (weight, skin color, etc).

That's fine. That in some cases may improve the cosplay. But that's impossible to tell from a picture.

Caitlin describes Lara Croft as "feminine but dangerous, well-educated but athletic". By dressing as her, becoming her, she's taking on some of those traits. If it boosts her morale, if it makes her feel better about herself, because she is sees herself in that way, or is acting in that manner, why should she let her weight and build be a barrier to positive mental health?

As I said. Dressing as her is fine. I never said otherwise. I said that it was poor cosplay when she did so. And her weight was the main factor.

To provide another example of a failed cosplay (not related to weight) is this guy here: He was trying to cosplay this character: Compare that to this fellow: 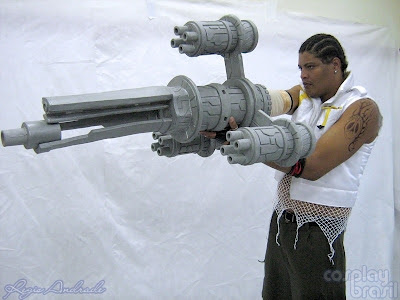 The second guy clearly did the cosplay better (even if it's not perfect). And barret wallace (the character being cosplayed) is basically impossible to get the body type right. I've personally never seen anyone with that shape/height/mass except for maybe one guy. In my entire life.

The point is, both people are free to cosplay as him. But don't be sad/mad/angry/upset when people say your costume is inferior.

Hate speech is definitely too far, but just because a person is insecure about how they look, doesn't mean their cosplay is immune to being critiqued and criticized.

Alright, there's the difference. I have friends who cosplay, and most of them just do it for fun. Some because they enjoy crafting and costuming, some for the culture of conventions, whatever. If you believe cosplay's purpose is to create a perfectly accurate representation of a role, then I can certainly see your point.

The important thing here isn't the cosplay anyway. The cosplay brought attention to the picture, no doubt, but the same situation could have easily happened with her in entirely different attire. The picture is of her dressed in a manner associated with "sexy" and "beautiful," and a picture of her in an slinky dress or something could have easily elicited the same response, the costume and image text just likely made it spread more.

That is to say, the real problem here is of course the degradation and humiliation of a perfectly nice lady, and not whether or not she should have been cosplaying Lara.

But I suspect you'd agree with me on that.

That's actually one of my biggest complaints about society. Everyone's so scared of wearing something unique, that everyone dresses the exact same and it's just bland and boring.

Along with that, I don't mind kilts/skirts on men either. Clothing is clothing. Wear whatever.

I used to browse r/cringe without thinking like that. People on that subreddit make fun of people who obviously have some sort of disorder (telling to kill themselves and stuff). I knew it was bad, but I never put my self in the person we were making fun of.

IIRC, /r/cringe started out with people posting cringe-worthy stuff of themselves, rather than others. Once it switched to shaming/pointing out other people, that's when it really went downhill.