Sorry, the mySA web domain is toxic, but it's strangely difficult to find good reporting on this.

Honestly, it feels like Enron 2.0 around here. Like "Oh shit who could have guessed that a growing population could stress the Texas energy grid if we don't add capacity?". Lol the Federalist article was like "omg unreliable energy sources" and, c'mon, who the fuck is preventing anyone in Texas from burning fossil fuels to make money??

I think this is going to elevate to the national scale of attention within a month, when rolling blackouts begin. We're nowhere near peak summer, here.

Solution: If I divorce my wife and she marries my sister and then they adopt me, I could naturalize as Australian. Actually, that might be not true and I need to do more research.

Turns out Texas' approach of having no capacity market and letting the energy market spike to fund sufficient capacity means generators may decide not to take that risk.

This might be Enron 2.0 except there's nobody to blame, or rather no company because the blame rests with the state government. People like to blame ERCOT, but they're just working with the tools they're given.

The guy I know who has worked in the Texas energy sector most of his life built a new house a few years ago. He made sure to design and build his own power generation system, so that should tell you pretty much all you need to know about his faith in the Texas energy grid. He probably already got his money's worth during the winter storm, in the form of preventing property damage.

He told me yesterday that during widespread heatwaves, like recently, there's no pressure differential out in west Texas driving the wind and windmills, and one of the major natural gas generating plants has been down for maintenance and repairs. Since large-scale, long term weather trends are usually easily predictable about a week in advance, it seems like someone has dropped the ball repeatedly this year on coordinating when major fossil fuel burners should be allowed to drop offline. In fact, I wouldn't be surprised if Texas has explicitly regulated against the state being able to tell energy companies when they can and can't produce.

This week, not only does the city throttle our Nest thermostat every afternoon (we can more than afford to curb our usage for the greater good, no biggie), but Greg Fuckwit is allocating as much money as possible to build a wall. I guess it'll be built alongside Trump's totally complete, beautiful wall?

My A/C went out for a couple days in mid-July last summer. If we have rolling or total blackouts, for sure, expect a repeat of this.

I'm not familiar with the details of how ERCOT manages available generation, but in MISO they cannot deny generation outages. I'd be surprised if ERCOT has more power. But, most generators do want to be on in times like this because they make a lot of money. I wouldn't be surprised if they had planned their outage months or even a year or two in advance and had specialized outside contractors lined up. It might have been a question of making a million dollars last week versus paying out $500,000 in contract commitments and run the risk of having a failure without this maintenance and missing out on millions of revenue.

Now I'm curious and since you know this stuff I'll ask:

An economist would say "spiking prices means incentive to bring more power online because the value of power increments increases." It sounds like you're saying "spiking prices do not counter the peril of participating in a volatile grid." Do I have the gist of it? Could you elaborate either way?

That's exactly it. Everywhere else they pay for enough capacity. It's basically break-even costs and only enough generation up to the expected demand (plus a margin). The peril of not having frequent enough or high enough real time prices discourages long term generation investments.

And if you want to assume they're being shitty about it, not having enough generation means more frequent high prices for all of your other generation. Enron got in trouble for withholding generation, but what if you simply don't build enough generation? Same thing but you can't get in trouble.

Yeah Ferrari famously limited their output back in the late '90s when Enzo died so they could scalp more per car. You could bid your way to the front of the line, etc. Scarcity is definitely a business model. Lookin' at you, Pappy Van Winkle, you overrated Tennessee-tastin' asshole.

Every time Republicans decide to profit off something on Maszlow's Heirarchy it ends badly. It might not crash immediately, but the crash is profound. I guess it makes a select few steenking rich until the cards blow over so it was all worth it in the end.

Ask and ye shall receive

Yeah I saw the other day that 70% of the failed power in Texas was gas, not wind or solar. And then I saw this morning that ERCOT was going "dudes don't use your air conditioning or the whole grid will collapse" and that sure looked like a Tragedy of the Commons problem if ever I saw one. Fuckin' use up all the power before your neighbors do, at least you can think back to this morning when you could stick your head in the ice box without worrying about your otterpops melting.

A recent experience with my understanding of Texas' heat was in a conversation I'd had with a high school friend's dad. Mr. Wollam, a very soft-spoken emotionally conservative guy that was our soccer coach in high school. I'd asked him, " So Mr. Wollam, how is it now that you're living near Houston?" His reply, "Jeff, It's too fucking hot and I hate it. If I'm not in an air-conditioned building, it will kill me.

If this is a common experience in Texas, there are some folks living life on a precipice. Stuff is gonna fall apart sooner or later.

The three years I lived in Houston, I commuted to class and my on-campus office on light rail and foot. The first day, new student orientation, I checked the radar and left the apartment wearing my swimsuit and flip flops, with dry clothes in a plastic bag. An umbrella is actually a handicap in storms that intense. That first day was only the first time I was nearly struck by lightning. It struck behind me so close that by the time the sound reached me and I turned around, the bolt was still active. Maybe 100 yards away. Cool.

In the summer (about mid-March thru mid-October), "good weather days" consisted of me arriving for class or meetings dripping sweat from a mere 20 minutes of walking, with a sweater in my backpack. See, pretty much every building on campus was blasting A/C in the hopes of preserving documents, computers, or lab equipment, and within 5 minutes with no sweater, I'd be a wet, shivering mess.

Because of (I guess?) the non-industrial-strength A/C unit in my "luxury apartment", when things like bags of chips went "stale", the chips became soggy and wet. We bought a dehumidifier, and it'd pull about four gallons out of the air inside our apartment every 36 hours. We had black mold that couldn't be eradicated. We would have moved if we could have afforded the time.

And people wonder why Houston is such a car-centric city. It ain't all an oil and gas company conspiracy, but yeah, prolly some of it is.

Winters were alright, though. But yeah, no one should've ever built a city there. I get it, it's the furthest point inland you can get to by boat on the Gulf Coast west of the Mississippi, but blegh.

We'd party in Dallas when we had a chance. There were girls there. And stuff to do.

That said getting there basically meant crossing New Mexico, and then ending up in the New Mexico desert except with humidity, an utter dearth of geological interest and slaughterhouses as far as the eye can see.

Global warming is not going to be kind to the American south.

The divorce-marriage-adoption plan sounds workable. Go with it.

(Sorry your state is run by dipshits.) 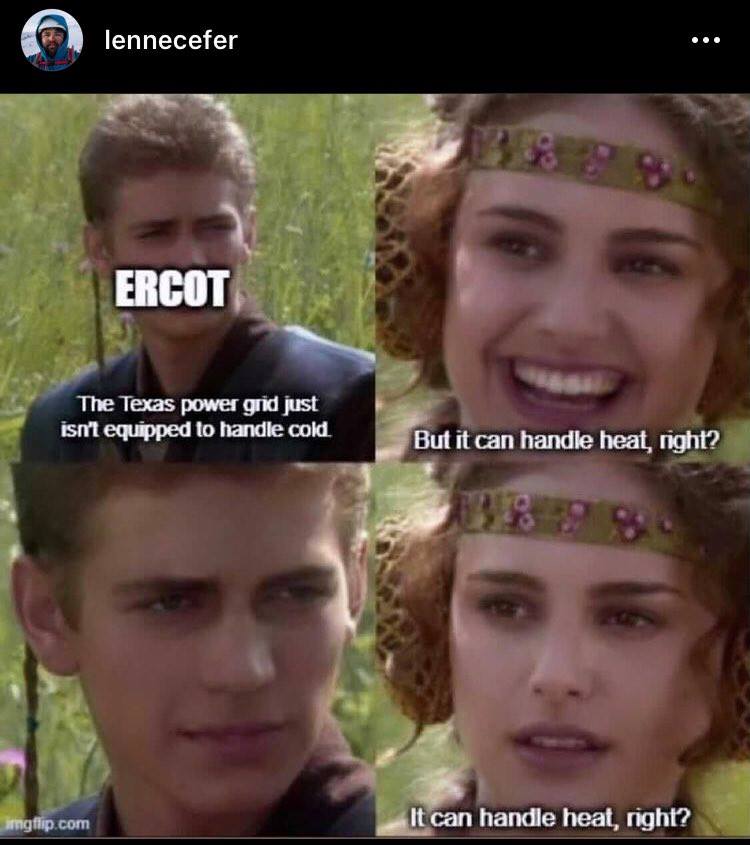