Biggest context missing from the article involves this paragraph:

After one of his children was allegedly stalked by a fan in South Pasadena, Musk blamed a Twitter account that tracked ­public data about the whereabouts of his ­private jet — his “assassination coordinates,” Musk said. He then had Irwin suspend the @ElonJet account, the account of its owner, and dozens of others that tracked celebrities’ planes. Several journalists from CNN, the New York Times, and elsewhere were suspended for tweeting the news.

So I'm just wasting my life away another night, maybe five weeks ago, and I see a Twitter "Spaces" (voice chatroom) start gaining momentum. It was initiated and moderated by a handful of quasi-mainstream/establishment reporters like Taylor Lorenz, Ben Collins, Brian Steltzer (ok, that's mainmainstream) and a few others, discussing the recent suspension of the kid who built the automated Elon jet tracker. They manage to successfully summon this guy in about 15 minutes to discuss how all of the info is already very public domain. The voice chat eventually hits a critical mass of around 12,000 or so people, at which point, tippytop Elonstans show up to begin defending Elon's narrative, that his child's safety was threatened because of the jet tracker. Twitter's (yes, this handle) @jason begins screaming at Judd Legum, "DO YOU HAVE CHILDREN?? DO YOU?! HOW MANY, AND HOW WOULD YOU FEEL IF THEY WERE THREATENED LIKE THIS?!?", and literally every single journalist was like "Jason, I think it would be wise to wait until more facts come out surrounding this incident". @Jason also berated the guy who built the Elon jet tracking account, who wisely said that he was declining to answer any questions, for legal reasons.

Then, Elon shows up, not long after. He's clearly phoning in from a car or airplane, and feels the need to attempt talking to the voicechat listeners and also type on his keyboard simultaneously (probably because Elon is Very Busy and Hard Working Allthetime). Judd Legum is really going to town now, "Can you give us more details? Did this incident occur near the airport? What was the nature of the threat??", etc., until about 8 minutes of Elon's nonsensical stuttering goes by, and Elon ragequits.

Of course, then it came out shortly afterwards that police are instead treating the member of Elon's security detail responsible for protecting his child as a suspect in the investigation.

And you'll probably never hear another update about the incident.

All in all, the perfect encapsulation of Elon's Twitter, as far as I'm concerned. He bought the world's most powerful messaging device, and he's almost done unintentionally ruining it.

I’m not really on social media, Hubski excepted—if that even counts, so I’ve mostly not followed this saga. However I found this to be a pretty fascinating read. Seems to me that twitter would be better as a non-profit foundation. It’s such a powerful platform that I think actually does some good here and there, which differentiates it from every other platform. But it needs public input to be its best self.

Imperial Germany funded Lenin. They funded insurgencies in India and Ireland and also tried to bring Mexico into the war but the US and England weren't weak like Russia. So Lenin rode to Moscow on an official German train with official German marks. The goal wasn't to make Russia German, the goal was to fuck Russia up severely enough that the Eastern Front would cease to be a problem and allow Germany to bring their full might to bear on Western Europe.

Lenin was a shitty politician. He was a legit criminal. But because he was extremely driven and extremely ruthless, and because Russia was extremely weak, he managed to replace the Tsar and consolidate power in himself, replacing every functionary and diplomat with loyalists. The end result was extremely shitty for Russia in general and the world as a whole, but f'n great for Lenin and a spectacular payoff for the Kaiser. 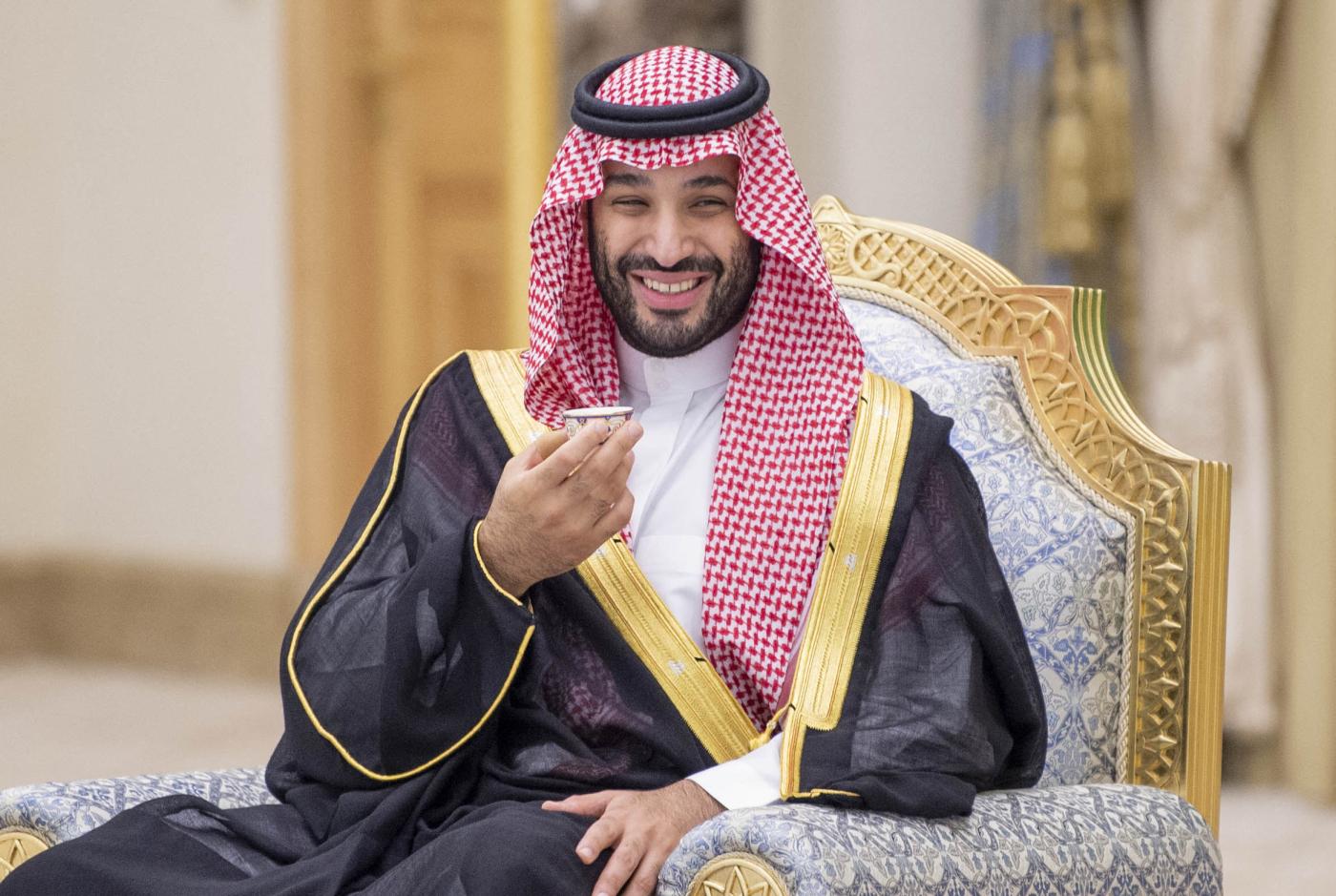 The most important social network in Saudi Arabia is Twitter. The guy who ran point on Khashoggi started out as a ham-handed hacker with money and then became "lord of the Flies" as MBS' social media manager. al-Qahtani hired moles inside Twitter in order to unmask and prosecute dissidents.

MBS consolidated power by locking up everyone with money and influence and then blackmailing them to get out. This includes Al Waleed bin Talal. 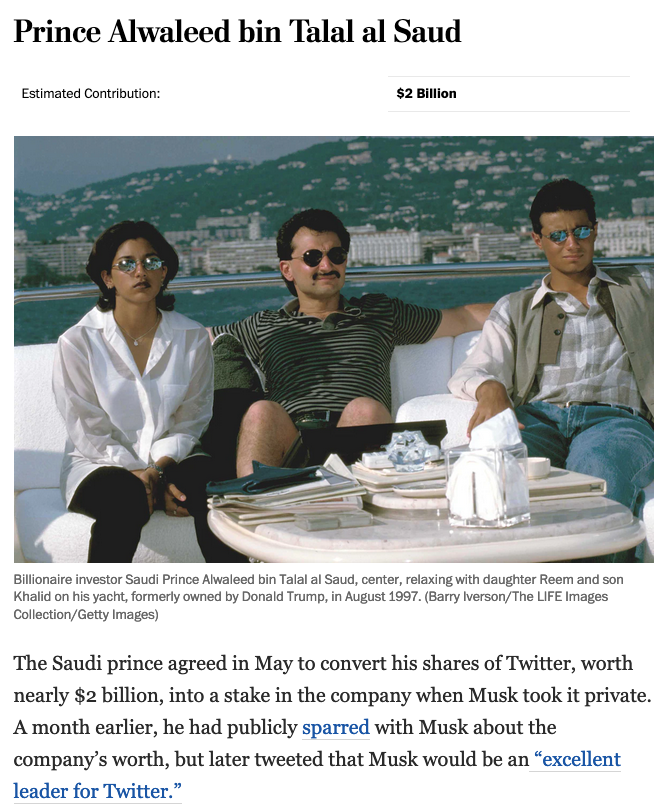 Does Musk think he's carrying MBS' water? of course not. Look how edgy he is. 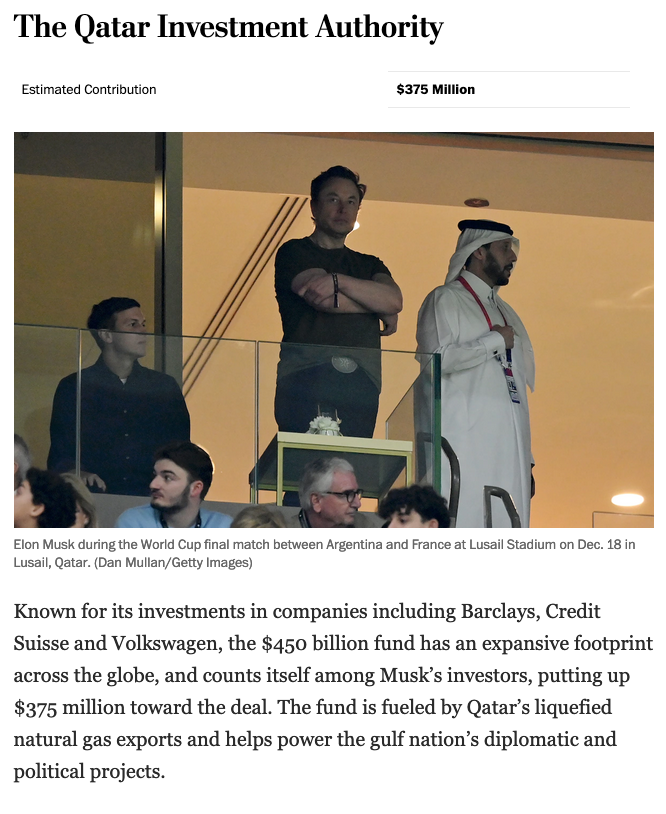 No, no. He owes his entire self-esteem to the Saudis, Qatar, Larry Ellison, A26Z (of course), Sequoia (of course) and the money changers. It helps him make independent decisions.

What they get: As part of the deal, anyone who invested $250 million or more gets special access to confidential company information. But giving that privilege to foreign investors is raising flags with Biden and U.S. officials. Of particular interest is whether that includes access to personal data about Twitter’s users since several of the entities are entwined with governments that have a history of cracking down on dissidents on Twitter and other online platforms.

What MBS gets? I mean fuck. It isn't even his money.

To add to your point: Someone was like "Do you really think the Saudis would invest billions into a project that they knew would become unprofitable or even tank completely, just to destabilize the USA?" (to say nothing of getting insider intel on Saudi dissidents), and I just started laughing.

It's not to destabilize the USA, though, it's to increase surveillance over domestic dissent. People forget: Khashoggi wasn't even a particularly fierce critic of MBS. He professed enthusiasm for the man with regularity. But he disagreed... and he prrrrrrrrobably belonged to the CIA so... MBS reshuffled the deck.

I think MBS regards the USA the way a rodeo clown regards a bull. The bull is the entire reason he's in the ring, is predictable but not entirely, and is largely busy with someone else's crap, but every now and then you have to dance in front of it so you can keep on keepin' on.

We have public spaces where free speech is protected. Why is it so hard to imagine extending that into the realm of the internet? Only because we are living through an era of hypercapitalist privatization. A few days ago, it was "People don't actually want to stop working at 65, so we should only offer Social Security payouts at an older age". Rick Allen, the shitbag behind that notion, will face zero electoral consequences, of course.

Why is it so hard to imagine extending that into the realm of the internet? Only because we are living through an era of hypercapitalist privatization.

The shit's too important to leave up to entitled rich sociopaths, but in general capitalist systems require a crash before they can rebuild into something more sensible.

Still waiting for Elon to re-instate my very first account. I wonder if he sometimes bends the truth about his plans for twitter?

I forgot the password and email address a long, long time ago and despite multiple attempts to gain access I think it was taken over by someone with more time and energy than me.

I do wonder what they did to get it suspended though?

It must feel so bad when even all those fascists ex-presidents won't come back and play with your new toy?

Fear not, my friend!

Hmm I wonder if the Truth Social investors are happy??