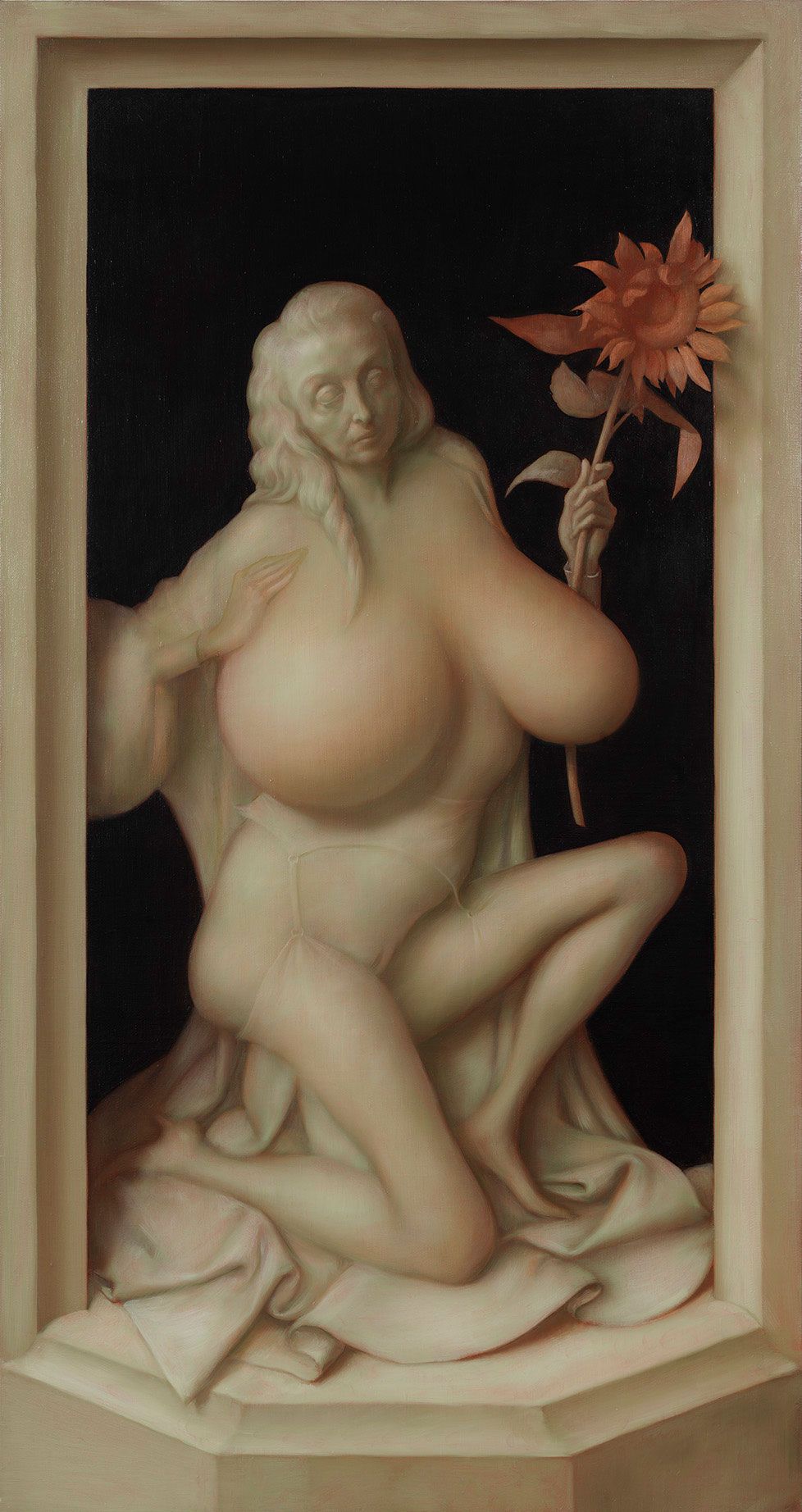 It's all part of the game.

If I paint that, I'm a hack. If I paint that and get it into Gagosian, the only people who get to discuss whether or not I'm a hack are culture writers in NYMag or Vulture. If someone argues I'm a hack, someone else can make points by arguing I'm not a hack, and if any of my paintings go for more than was expected, they're vindicated and the guy calling me a hack is outdated.

It doesn't really matter what the work is, so long as normies on the street are offended by it. That's the whole schtick: you have to speak to the correct audience, using the correct signaling, to contribute to the correct discussion.

- "John Currin is the R Crumb of painting": communicates provocation to people of modest wealth who consider themselves countercultural.

- "John Currin is the Russ Meyer of painting": communicates provocation to people of less modest wealth who consider themselves less countercultural.

- "John Currin is the Toulouse Lautrec of modern painting": communicates provocation to people of extremely modest wealth who studied a little art history

- "John Currin is the Jeff Koons of painting": communicates provocation and glitzy commercialism to people of wealth who know what a Koons costs

- "John Currin is the Caligula of painting": communicates provocation to people with zero understanding of art who are impressed by Trump's bathroom

“There’s been this thing going on between the face and the body.” Currin is pointing to one figure’s stoic gaze and then her nippleless, water-balloon-like breasts, which hover impossibly over a birdlike body, which in turn is piled atop a similarly shaped nude that appears to be bent in half. Each figure’s face is recognizably Feinstein’s. When Currin started painting “the enormous breasts, the looming breasts,” as he says, over twenty years ago, he negotiated their cartoonish quality by going the opposite route with faces. Painted with a palette knife from the neck up, figures in The Magnificent Bosom and The Bra Shop (both 1997) hold two erotic ideals in one hand: that of the inflated sex doll and that of the tortured painter’s muse, or, more simply, the unnatural and the natural. “When I put Rachel’s face on these,” he says, “it’s a little bit like that, like opening a yawning gap between the two realities of the body and the mind or the face.” Also, “When you paint someone’s face, you are both knowing it intimately and turning it into something that you can never know.”

That's pretty much Jeff Koons and Ilona Staller, or the fact that Gala is in half of Dali's paintings. We'll remember Dali 200 years from now because he had something to say; we'll forget John Currin because he mostly makes poker chips for rich people to remind themselves how rich they are.

Akroyd is a genius.

I'm not sure how anyone could take that image seriously. The inattention to the hips and legs vs. the breasts (the coloring really drives it home) is hilarious. I also literally lol'd before reading your comment.

Hopefully the picture is captioned "I guess I'm a 'boob man' ".

To me, the image seems like ironic commentary on misogyny or over-sexualization, but disagreement is fine and healthy.