HUH! It's almost like a whole generation realized that there's a ton of work out there which is not going to adapt to the new realities/requirements for skilled workers coming out of this pandemic, and are saying "no" to the businesses which are clearly going back to the status quo after 20 months of an ongoing pandemic.

What if - and I'm just spitballing here - what if the political establishment knew that "shitty pay for shitty work" was a consequence of our hypercapitalist globalism in a world of diminishing resources and knew the minute they dropped some pandemic assistance the whole fucking thing would crumble?

Yeah, my impression is we're at a what happens next stage phase. What's your thoughts?

Looking at 3ish % point difference in full rent payments made in Sep. 2021 vs. Sep 2019, and a multi-point drop after assistance programs were cut back. Source. Over 5 million households behind on rent, and estimating well over a million evictions this/next month alone. Source 2. Source 3.

Still seeing a 31% increase in food distribution comparing Q1 2021 to Q1 2020 in a nationally managed partnership of food banks. Source 4.

Believe it or not, I'm sanguine bordering on ebullient... long term. Short term? 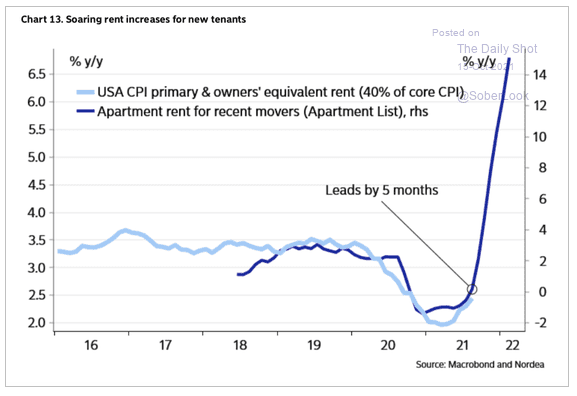 You and I have talked about this at length for several years now: automation is coming and that right soon. There's been a steady pressure to unstaff. Hey, great! They're letting you work from home! That means you're now competing against the entire goddamn world for your job. Which means if they can fob it off on a bot rancher from Bangalore to save 20%, they'll do it. And now everyone who could barely afford Silicon Valley is looking at Nowhere Gulch and dreaming of owning serfs, and he'll happily pay for the house with a check because this'll be easier if the wife and five-year-old can get settled in before school starts.

Food? You're literally asking "what happens if Democrats cut entitlements for some reason" and they ain't. They ain't ever. They learned that shit under Clinton - when you fuck with poor people you get Newt Gingrich. Which isn't to say every Republican governor out there isn't going to try on every possible variation of "fuck poor people" because it's "important to their base." Performative evil - that's where the Right is right now.

I used to say "there's opportunity in the Delta." Now I say "It's just the Churn." I was in the music industry when MP3 happened, the movie industry when Netflix happened, and tried to write a book when all the publishers sued Amazon. Before I ran off to join the circus, I interviewed with every acoustical consultancy in Seattle. When I came back, the only one still in business was the one I left.

Michael Lewis wrote an entire book about the skeletonization of the federal government under Donald Trump. Any semi-competent bureaucrat was able to evaluate that there was no room for competence in government, so they left or retired. This was also documented by Bob Woodward in Peril - there was literally zero vaccine distribution plan by the Trump white house. None.

Trump knocked over the sand castle. Dude three-finger-saluted the entire goddamn government for us. 'cuz I tell you what: opportunistic hangers-on don't hang on after the opportunity is gone. Which left an entire ecosystem open to exploitation by pie-eyed, opportunistic Lefties driven by mission.

And now? Now every crisis is gonna be an "add moar socialism" moment.

- Student loans. The Biden administration can literally forgive all of it through executive order. They won't, but they'll definitely fuck with it. They'll wait until things are really painful, though, so that they "won't have a choice."

- Medicaid. Can be expanded aggressively to anybody who got any pandemic assistance whatsoever under emergency proclamation, which is over when Biden says it's over. I'm currently paying $2 a month for healthcare because I cashed an unemployment check. I believe that rate is good for a calendar year at least, and that's only because nobody's pushed it out further. I'm effectively on nationalized healthcare and the Republicans didn't even notice.

- Housing. They've already started murdering the flood insurance subsidies. They could come after the mortgage interest deduction, too. They could also dump money into rural broadband to improve work-from-home feasibility.

- Food. Republicans have been picking away at SNAP for decades but the pandemic gives the Democrats an excuse to expand it, keep it expanded, and nationalize its management. Every state that fucks over its poor people is a poster child for "government overreach."

Don't get me wrong. Everything - everything - is gonna get worse before it gets better. A whole lotta lives gonna get destroyed. Personally? I've already mourned them. This was evident in the data eighteen months ago. All these disruptions are going to fuck up some lives, and I say that with 700,000 dead.

The people flying the plane actually care about the passengers and have actual flight hours under their belt. It's not a state I'd want any of us to be in, but we're here, and I feel like we're looking at the least worst option.

I've been kinda shellshocked since this.

That bill? Right there? Was the first time the Republicans went "actually we don't have the juice to block socialism anymore." They fucking gave up every principle - BEFORE Trump lost! because they knew in their very bones that small government market capitalism would go up like flash paper in a national emergency. Every bill since has been small, un-speechable death-by-a-thousand-cuts socialism and they haven't had shit to say about it because the kinds of guys who really just want Trump to be president because he's Trump are going to cock their heads quizically at some Buckley National Review diatribe against the risk against innovation by subsidized broadband as if they were Jack Russell terriers hearing Their Master's Voice. it's over their heads, man. The "base" barely believe in the gospel of Number Go Up. What they know is their grandsons are doing better with Gamestop puts, whatever they are, than they are with their social security.

We just gotta be among the survivors.

a job change because they weren’t satisfied with their options.

My (current) employer rolled out a flexible work policy a year ago to be used upon a return to normal. The policy doesn't say it, but execs were saying "in the office one day a week." Recently it came down that we should disregard that. Apparently at the board level they were told to not be so restrictive.

I'm really pessimistic about it. I think some people will almost never pop in the office and be fine while other managers will expect their employees to be in most of the time. Who's going to monitor if a manager is squeezing an employee out unfairly simply because they work remote 29 days a month? I can assure you, it's nobody.

So to the bit I quoted, it won't be enough to pay lip service. Companies have to mean it.

We had a "why can't we work from home" beef just recently. It came down to "because when you get used to not having to be in the office on Tuesday, when patients show up for non-zoom appointments they sit here pissed off until you rip down from 30 minutes away." As soon as we were able to work our way to "I hate being awake before 9am" we landed on "so be here at ten it's not like we give a shit." And remember - we want our practitioners in the office on days they're scheduled to see patients in person. Beyond that? Who cares? I used phat phat PPP money to build out a robust telecommunications system.

We've had zero problems with staffing. I recognize that I'm an anecdata of one but it seems that giving people the flexibility to do the job and the salary to make it worthwhile is generally met with enthusiasm. Pay people what they're worth and let 'em do the job so it gets done and you have zero staffing issues.

More meta observation: the bigger the company? The more faceless it is? The more management is "allowed" to treat employees like shit because they don't have to look 'em in the eye. And I think the pandemic has made people realize that they deserve better, and they hold all the aces.

At the start of work from home, the entire company was told on Thursday to start working from home the next Monday. Everyone except for my managers' groups. We were told to come in Monday normally. Monday, that changed and we went to work from home like everyone else on Tuesday.

I asked my team lead why. Why was there one day we were different from everyone else? He won't answer why. I think he's afraid to say our manager said so and then got overruled that Monday. This breeds distrust.

They like to say we're better together, but the same leadership does nothing to foster relationships while we're apart. Again, I think that erodes trust. Appearances are they don't care about relationships, so there must be an ulterior motive. I suggested we make time routinely to talk about what we're doing in our personal lives. Nobody would have to talk, but it would make the opportunity. "No, we don't need that, we have plenty of opportunities to talk." Except those meetings have set agendas, and we don't talk.

If this guy is your hero, you are a villain.

If this guy is your villain, you are a hero.