The intentional creation of new microbes that combine virulence with heightened transmissibility “poses extraordinary risks to the public,” wrote infectious-disease experts Marc Lipsitch and Thomas Inglesby in 2014. “A rigorous and transparent risk-assessment process for this work has not yet been established.” That’s still true today. In 2012, in Bulletin of the Atomic Scientists, Lynn Klotz warned that there was an 80 percent chance, given how many laboratories were then handling virulent viro-varietals, that a leak of a potential pandemic pathogen would occur sometime in the next 12 years.

A lab accident — a dropped flask, a needle prick, a mouse bite, an illegibly labeled bottle — is apolitical. Proposing that something unfortunate happened during a scientific experiment in Wuhan — where COVID-19 was first diagnosed and where there are three high-security virology labs, one of which held in its freezers the most comprehensive inventory of sampled bat viruses in the world — isn’t a conspiracy theory. It’s just a theory. It merits attention, I believe, alongside other reasoned attempts to explain the source of our current catastrophe. 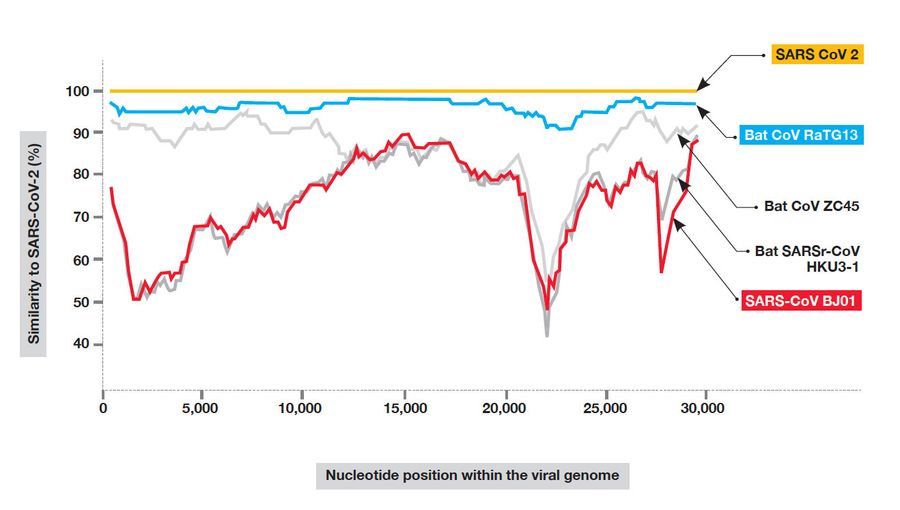 This chart measures the genetic similarity of known viruses to the novel coronavirus (which appears in yellow). By far the closest is the bat virus RaTG13, which appears in blue, and which was recovered in 2013 and brought to the Wuhan Institute of Virology.

This is a fantastically written piece. I think, importantly, it finally shed some light as they why the NIH (and Fauci in particular) seem so dead set against entertaining the possibility that the virus is lab made: because they would feel the weight of responsibility too closely.

One of the things the article doesn't touch too much on is China's absolute obstructionism of investigations (though that has been written about extensively elsewhere). To me, this is some of the best circumstantial evidence of the virus's origins, because there's no shame in a naturally occurring virus. It's not as if they obstructed SARS investigations in 03. In fact, they signed a compact with other SE Asian countries to facilitate expedience in handling and investigating similar outbreaks.

Personally, I have very little doubt about the lab hypothesis. There may be no direct evidence for either scenario, but there's two steps in one case, each of which are easy to describe and perform (i.e. creation and release). And there are a dozen hypothetical and vaguely described steps to the other case. Occam's razor couldn't be sharper here.

Like ooli I would have thought this a fringe theory before mk weighed in.

Nicholson Baker is a favorite author of both fiction and non. While confirming that this article was written by the same guy, I found that his Twitter account is the rare one that makes the world a better place.

Did you miss this discussion, from the early days of the pandemic?

I think this is really good reading, too, if you have time:

I did, thanks for mentioning it. Some of the same quotes in that conversation as today's article.

To me, this is what it looks like, and this is why I'm very hard to convince otherwise:

Someone calls the police to report shots fired. They show up to the scene, and I'm holding a smoking gun, my hands flecked with burnt powder. You lay on the ground, a bullet matching the caliber and rifling of my gun having felled you. [My occupation happens to be gunsmith who specializes in making guns extra powerful.]

The police say to me, did you shoot this man?

I reply, no, it was some dude from Atlanta; I bought my gun in Atlanta, and some guy must have gone to the exact same gun manufacturer to come here and kill him, but then he ran away before anyone saw who it was.

But, they reply, the gun that was used to shoot him may have come from Atlanta, but yours is moded to shoot with an extreme muzzle velocity and this guy was clearly shot with a similar ballistic trajectory.

Hmmm, I reply, I guess the guy in Atlanta must have taken the gun to be moded by someone who does the same type of work as me, and then that person gave it to someone else, who must be the real killer.

That checks, the police say, but what about the powder on your hand and the smoke billowing from the muzzle?

Well, easy: I was target practicing right next to him. But I couldn't be the real killer, because I target practice a lot, and I've never killed anyone before, so, you see, I couldn't have done it.

Open and shut, they say: You're free to go, sir, sorry to have wasted your time.

No problem, I say. Actually, I was worried it might have been me, but then I counted my bullets and they're all accounted for. Trust me, I was losing sleep.

I can't imagine, they say, just before leaving.

here is what razib has to say

i too remember when talking about this was racist. thank god we moved on from that!

Don't be disingenuous, talking about the origins of the virus was never racist, it was just that at one point this particular conspiracy theory was mainly touted by racists, like the article notes