I don't live in the UK or the US but I found this pretty interesting and roughly matches how both countries appear to operate, at least to an outside viewer.

The polarization in the states between two groups which hate one another generates this type of culture war on every topic, it forces complicated issues to be split into a "for" and "against" type analysis, with each group going all in on whichever side their tribe picks. It also leads to somewhat inconsistent views (pro-life, pro-death penalty for example appear to conflict for example), and beliefs held so strongly that there is little room for compromise, everything is a battle with 'the other'.

In the UK they have their own issues but it seems like a much less divided country, which is amazing considering it is comprised of countries who at a national level have pretty much fought and hated each other for hundreds of years.

Tangent: On twitter a few months ago, Adele was called out by many in the US for cultural appropriation as she wore her hair in dreadlocks while attending a festival in London. The UK response by almost everyone appeared to be general confusion as to what she had done wrong with many "defending" her partaking in a multicultural festival.

If you live in a country where different groups are locked in a culture war, signalling the group you belong to, and abiding by the rules of the group become very important. The group discriminate, the group demands compliance.

As a middle school teacher, the math of it all reminds me of what I teams to see in so many classrooms. Two or three highly active and vociferous students can really steer the agenda of any classroom. The great deal of kids are there to get a decent education, or show up because Mom and Dad say so, and have little interest in following or pushing back at the kids that arrive with a hard line agenda. 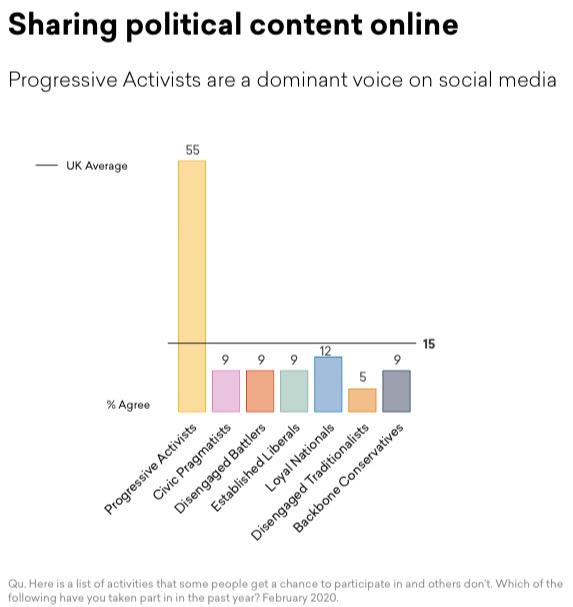 Is the opposite of a progressive activist a regressivist or a deactivist?

Many conservatives I know are probably 80% no-more-change and 20% back-to-the-way-it-was, and neither of those ideas encourage someone to push on social media the way that fix-all-the-broken-things does.

I would use the word "reactionary".

It states that 12% of voters accounted for 50% of all social-media and Twitter users – and are six times as active on social media as are other sections of the population.

I mean, that's just the Pareto principle. Statistically you'd expect 10%, not 12%, which kinda indicates that there is more engagement with social media than you'd expect.