Things could have been different.

Errbody knows Frank Lloyd Wright was an asshole. Most people don’t really understand just what a gaping asshole he was, though. Born in rural Wisconsin, his parents divorced at 14 and while FLW maintained what a giant influence his father was on his life, he never spoke to him again. He made it 3/4ths of the way through high school and bailed; then made it two semesters through UW-Madison before bailing to go play architect. He drafted for an architecture firm and decided they didn’t pay him enough, then left for another and decided they didn’t pay him enough, then landed at another where he got into regular fistfights with the other drafters but since the principal of the firm was also an asshole, FLW ended up with more responsibility, not less.

He was a dandy and a society d00d and because he did a bunch of work on the new auditorium, he caught the attention of a rich couple’s daughter. Even the in-laws didn’t provide enough funds for FLW’s tastes, though, so he did a bunch of moonlighting, including houses within blocks of his boss’ residence, which got him fired. Fourteen years and five kids into his marriage he started schtupping the wife of a client who was also his next door neighbor. They were not discreet. After six years they both bailed on their families and kids and ran off to Europe for like a year. When they came back FLW built Taliesin (mythological Welsh warrior priest whose motto was“The Truth Against the World”) out in the sticks next to his mom’s land so that his mistress wouldn’t get hounded by paparazzi.

"Frank, in all this black old town there's no place to go but out, nor any place to come but back, that isn't bare and ugly unless it's cheap and nasty I want to put a garden in this wilderness of smoky dens, car-tracks, and saloons. . . . Frank, you could make it unique." Wright replied with his customary arrogance, "I know I could, where I can get the ground. Down on the South Side just off the Midway. The old Sans Souci place. Been on the rocks for years. Stupid old ballyhoo. It's just big enough, I think.” 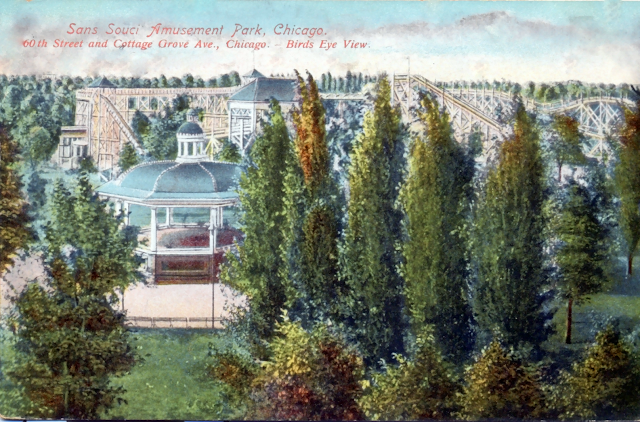 So, a few problems. (1) South Side Chicago was staid and conservative and experiencing White Flight due to crime. (2) South Side Chicago was less accessible than the rest of Chicago because it was where the trains didn’t go. (3) Ed Waller gave FLW total artistic control from the layout to the napkin rings. (4) Frank Lloyd Wright loved performance and loved the theater but gave absolutely no fucks about how either were done:

Despite Wright's orations to the contrary, I came to the conclusion that he was not genuinely interested in the theatre. He certainly knew next to nothing about it. Yet he loved it, as a child loves posies without knowing how to make them grow. His love for it never grew to the extent that he would marry it to his architecture. Years later, when I had plays rehearsing, he would motor from Taliesin to New York and stay for a week or more attending all rehearsals, and then drive back, the day before the opening.

Nonetheless, FLW was given carte blanche to turn a run down amusement park into an upscale pretentious beer garden that would be the synthesis of art, music, architecture and entertainment. Your word of the day is “Gesamtkunstwerk" because if you want to reach the people, quote Wagner. We look things up so you don’t have to.

According to Wright, the design took an hour (“the thing had simply shaken itself out of my sleeve”) and the whole thing was up in three months. There were a number of “firsts” on Midway Gardens - it was the first FLR use of cast block 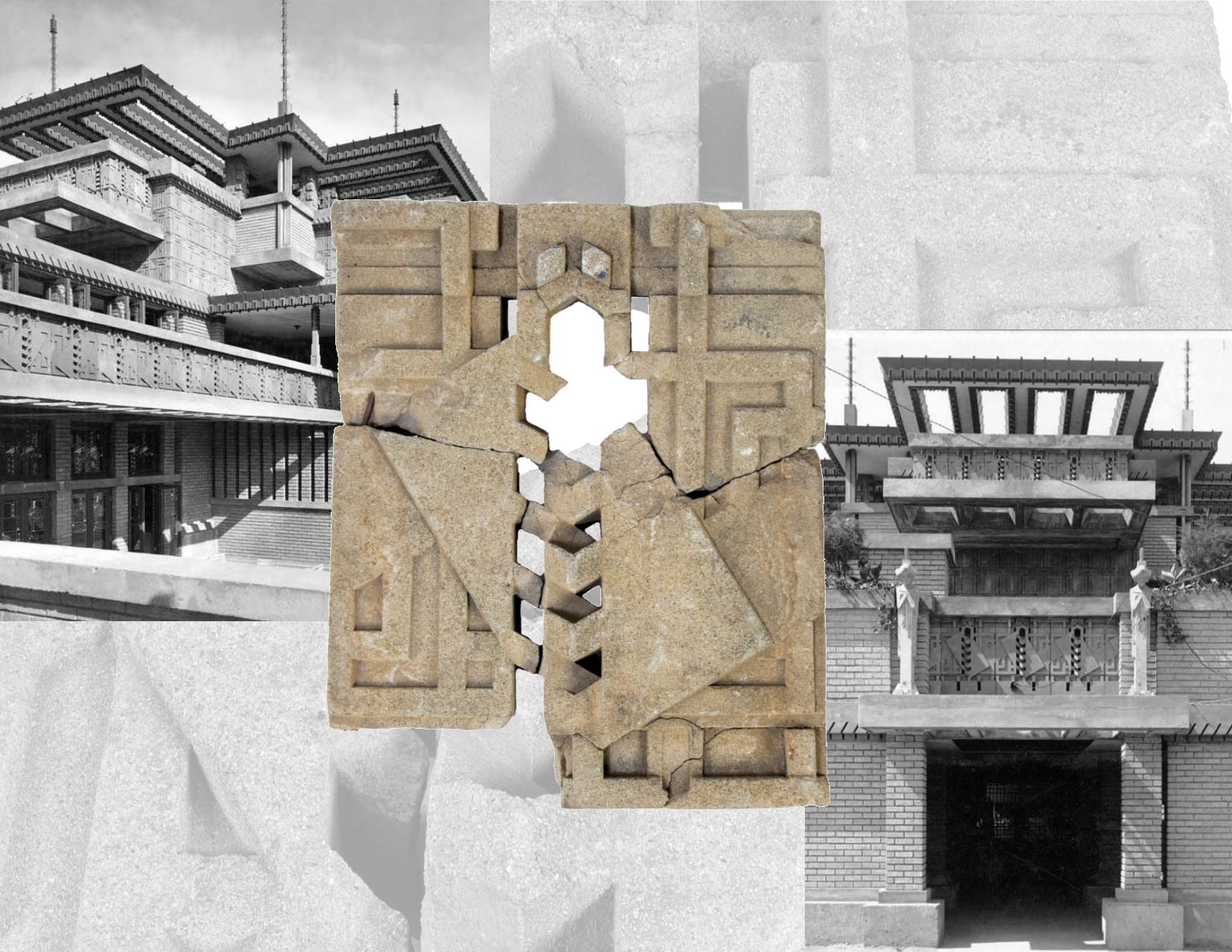 Which of course was later the basis of his textile houses, the Ennis House being the most famous. 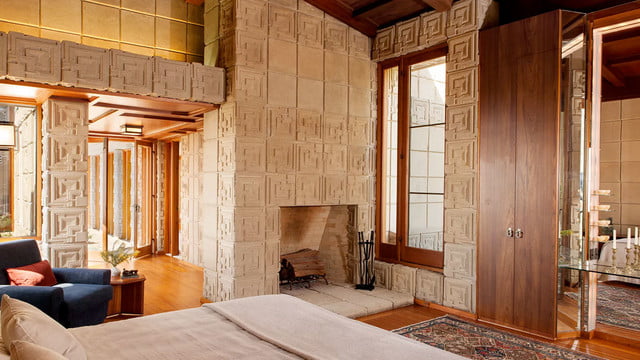 It was the first example of FLR doing lighting. The “totems” that lit the Summer Garden courtyard at Midway

Are obviously an early iteration of the “Taliesin III lamp” that’s still being produced.

It was the first (and last) example of FLR collaborating with anyone - the site was chocablock with “semi-cubist” sculptures inspired by and executed by Alfonso Iannelli and his wife Margaret, 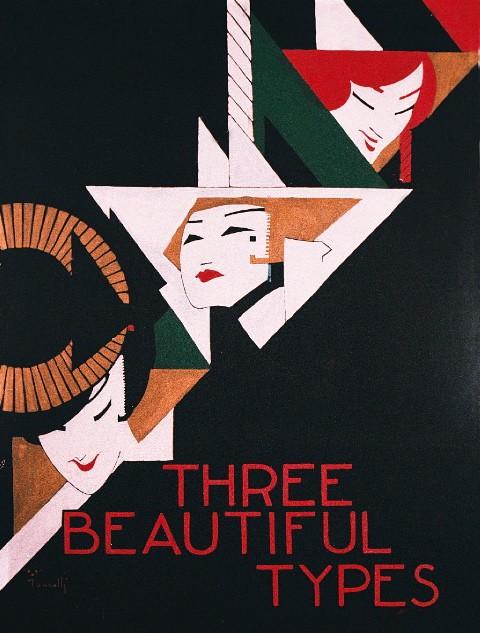 two artists out of LA who had interned with Gutzon Borglum, the guy who did Mt. Rushmore. The Iannellis were out in LA doing posters for the Orpheum when Frank Lloyd Wright’s son John noticed them, recommended them to his father and they flew out to do this stuff: 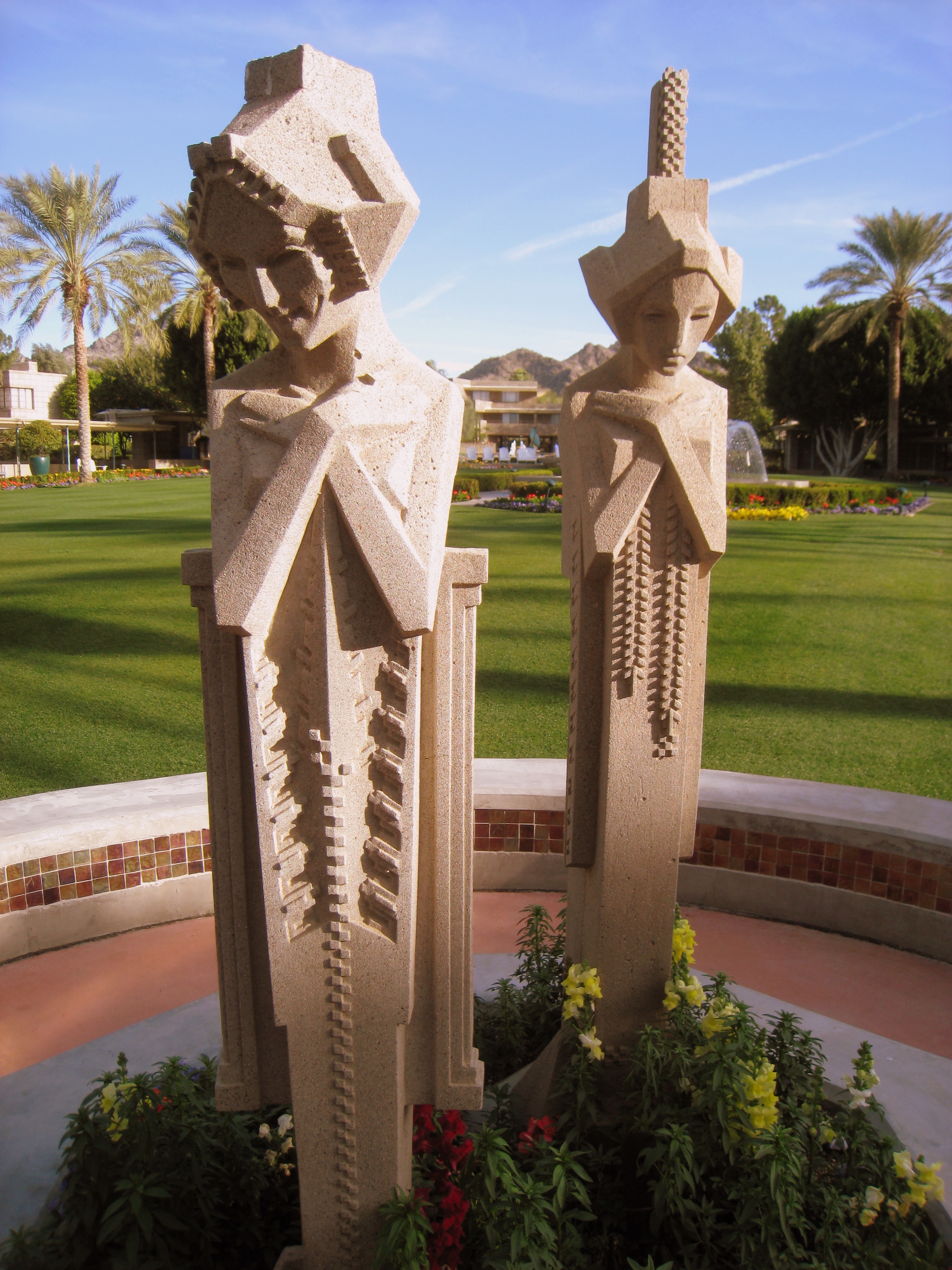 Waller wanted Midway Gardens open, so it opened not-quite-complete on June 28, 1914. $350k was sunk in its construction ($9m in 2020 money). They booked Anna Pavlova for a four-week engagement but unfortunately, Waller only had $60k in the bank. I couldn’t find any suggestions that FLR told him $60k would be plenty; Frank Lloyd Wright, however, was notoriously budget-averse (even 30 years later, Fallingwater was supposed to come in between $20-30k and landed at $155k). 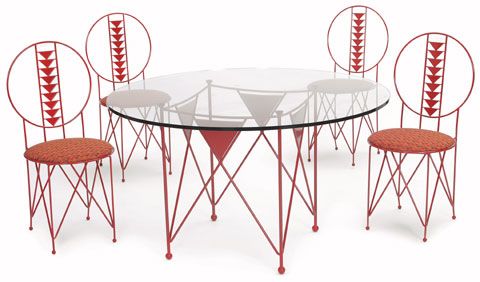 Crowds didn’t exactly stay away in droves, but…

It didn’t help that Franz Ferdinand was assassinated the day after Midway Gardens opened, or that Germany had invaded Belgium before the salad dressing needed restocking. It didn’t help that Frank Lloyd Wright refused to credit anyone but himself on any of it, leading to a contentious, litigious relationship with the Iannellis (the Frank Lloyd Wright Foundation refused to say the name “Iannelli” until 2000 or so because they, too, are dix). It didn’t help that Ed Waller was expecting lease payments on a $1.2m property and ended up with lease payments on $9m (in modern bux). It didn’t help that two weeks later, FLW’s handyman went batshit, set Taliesin on fire and hacked everyone to death with an axe as they ran from the flames while FLW was at Midway dealing with last-minute bullshit (the place was never “finished”). 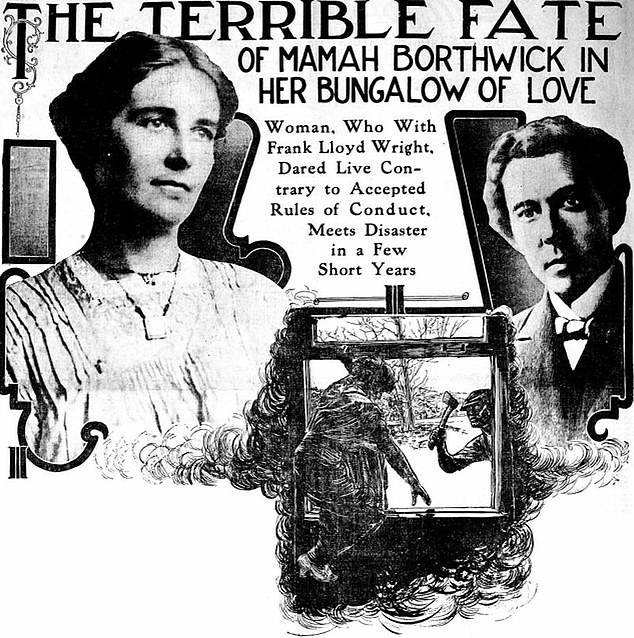 There was absolutely nothing going for Midway Gardens, and everything going against it. Ed Waller declared bankruptcy in 1916 and Midway Gardens was bought by the Edelweiss Brewing Company. But the Lusitania had been sunk in 1915, the US entered the war in 1917 and doughboys were “over there” by 1918 so there wasn’t a whole lot of socializing to be had. Prohibition dropped in 1920 and Edelweiss, having painted up the bare walls with fun party colors, sold “Edelweiss Gardens” to the Midway Automobile Tire and Supply Company where

a motor pageant, in which a track was built in the Summer Garden where an automobile association paraded cars and the newly-elected mayor of Chicago, William Hale Thompson, was crowned the "king and queen of motordom”

…was the last event ever held there.

Things finally went tango uniform in 1929. Two different demolition companies went bankrupt pushing shattered sprites and textile blocks into Lake Michigan. the Iannellis came by and grabbed a couple concrete sprites, which lay in a field outside chicago for 40 years before making their way back to the Frank Lloyd Wright Foundation. It promptly rebranded them “the Biltmore Sprites.” Midway Gardens was the only project Frank Lloyd Wright ever disavowed, which is unsurprising given the circumstances but also telling as it was his biggest project and also the one he had the most personal control over. When asked, he said "the proud Midway Gardens" "was cheapened to suit a hearty bourgeois taste" and that he was glad to see it gone.

Meanwhile Margaret Iannelli went insane and spent the rest of her life in a mental institution. She spent 40 years doing the covers for the newsletter. “Modernism” belonged to Laszlo Moholy-Nagy, who fucked up Bauhaus after Itten left because things were becoming too mechanistic and then founded the Chicago School of Design. Frank Lloyd Wright never did anything vaguely human again and American art got stuck with this shit 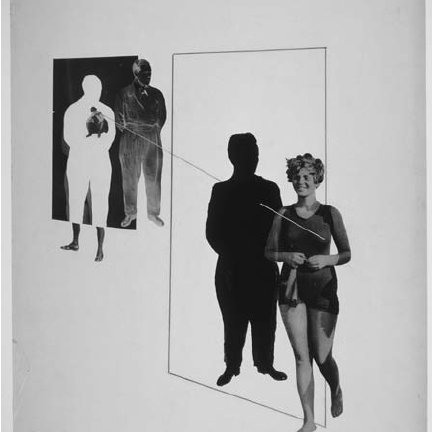 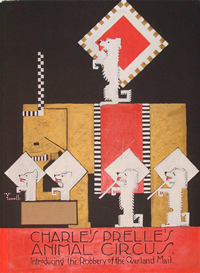 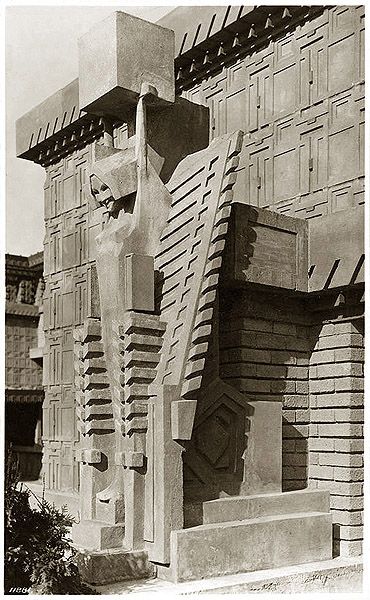 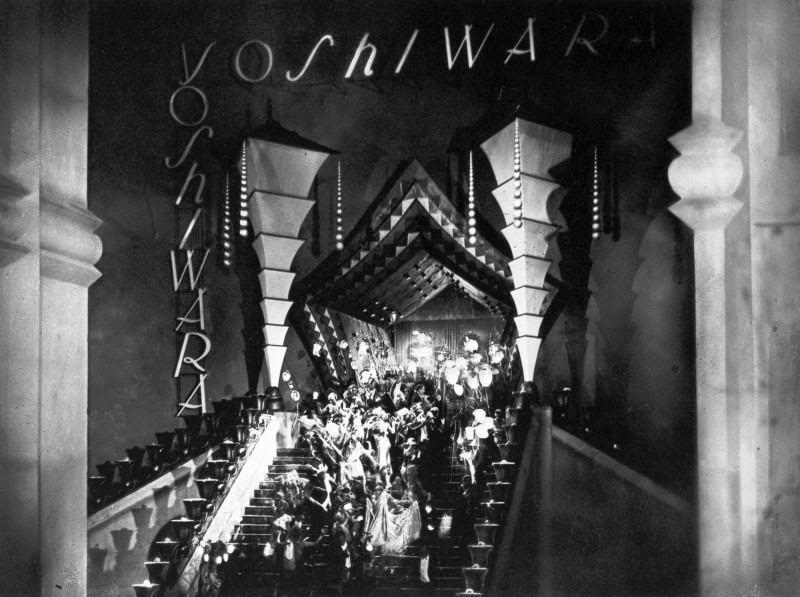 But by the time Fritz Lang was shooting Metropolis, Midway Gardens was 10 years old and had been through two owners. 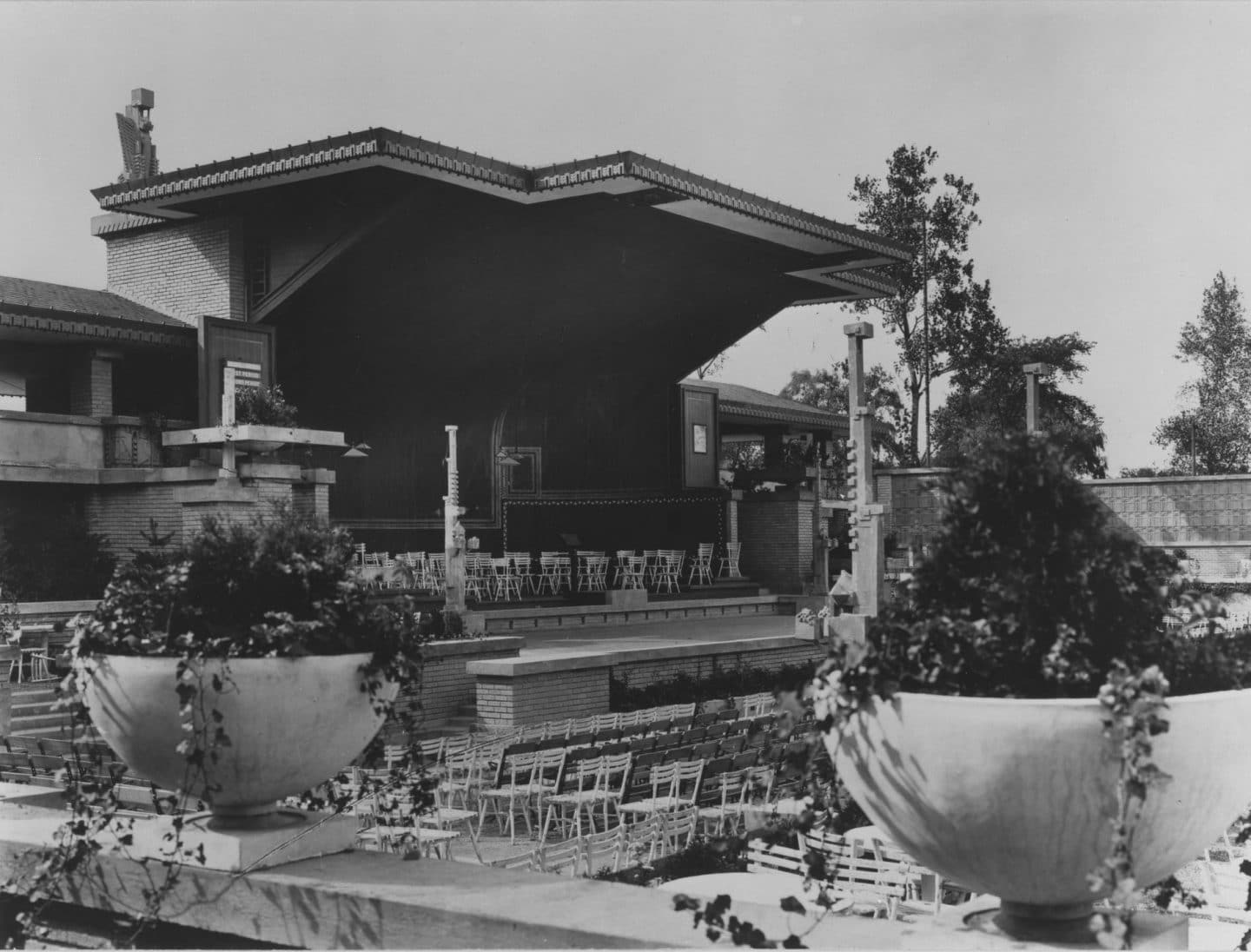 And it must have been something. A night venue of cubism, Frank Lloyd Wright, Japanese influences, Mayan influences, garishly painted concrete block, on the wrong side of the tracks, during Gangland Chicago. The tire company did vaudville and roller derby and covered the place in neon lights and burlesque girls. It must have looked like the Chronicles of Fucking Riddick in there. HR Giger with zoot suits and tommy guns. Midway Gardens got to Chicago five years before Al Capone did; Capone only outlasted it by two years. Unfortunately I can’t find a single image of the place in its seedier incarnations. 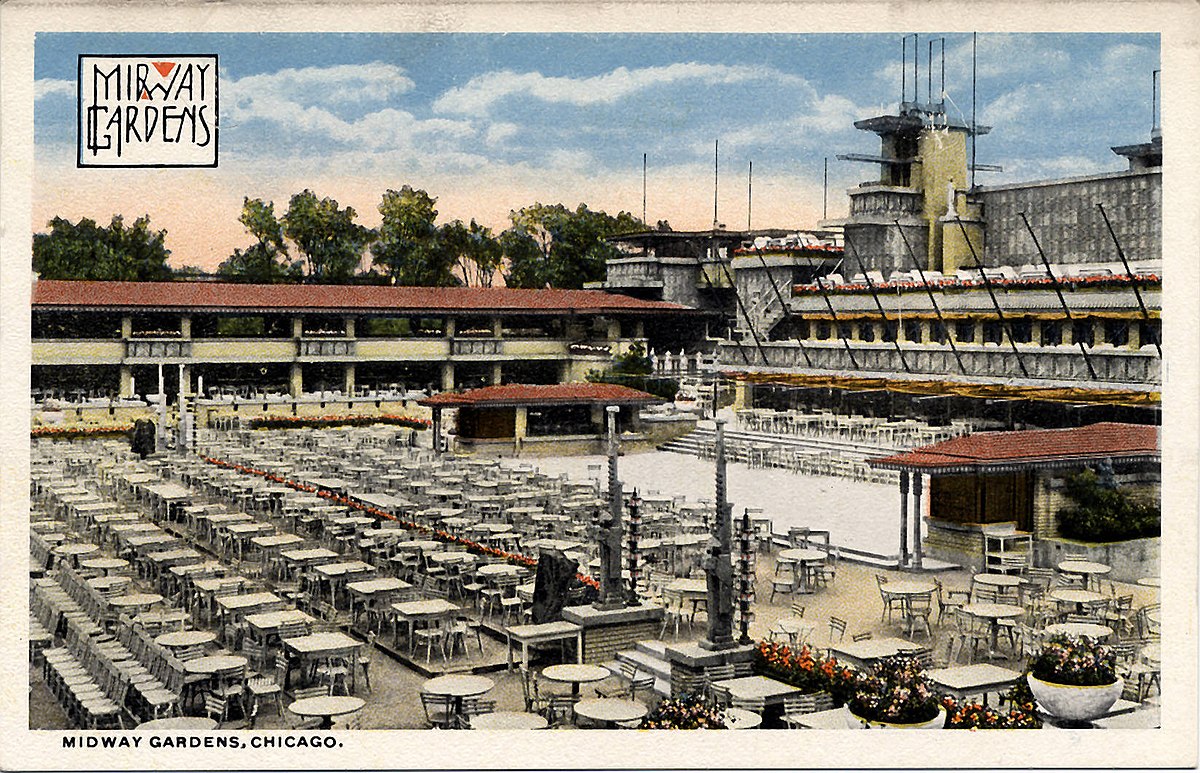 Why do I bring this up? No real reason, really, except that I’ve had to do some pretty deep diving for… reasons and I might like to refer back to this post in the future if all goes well. 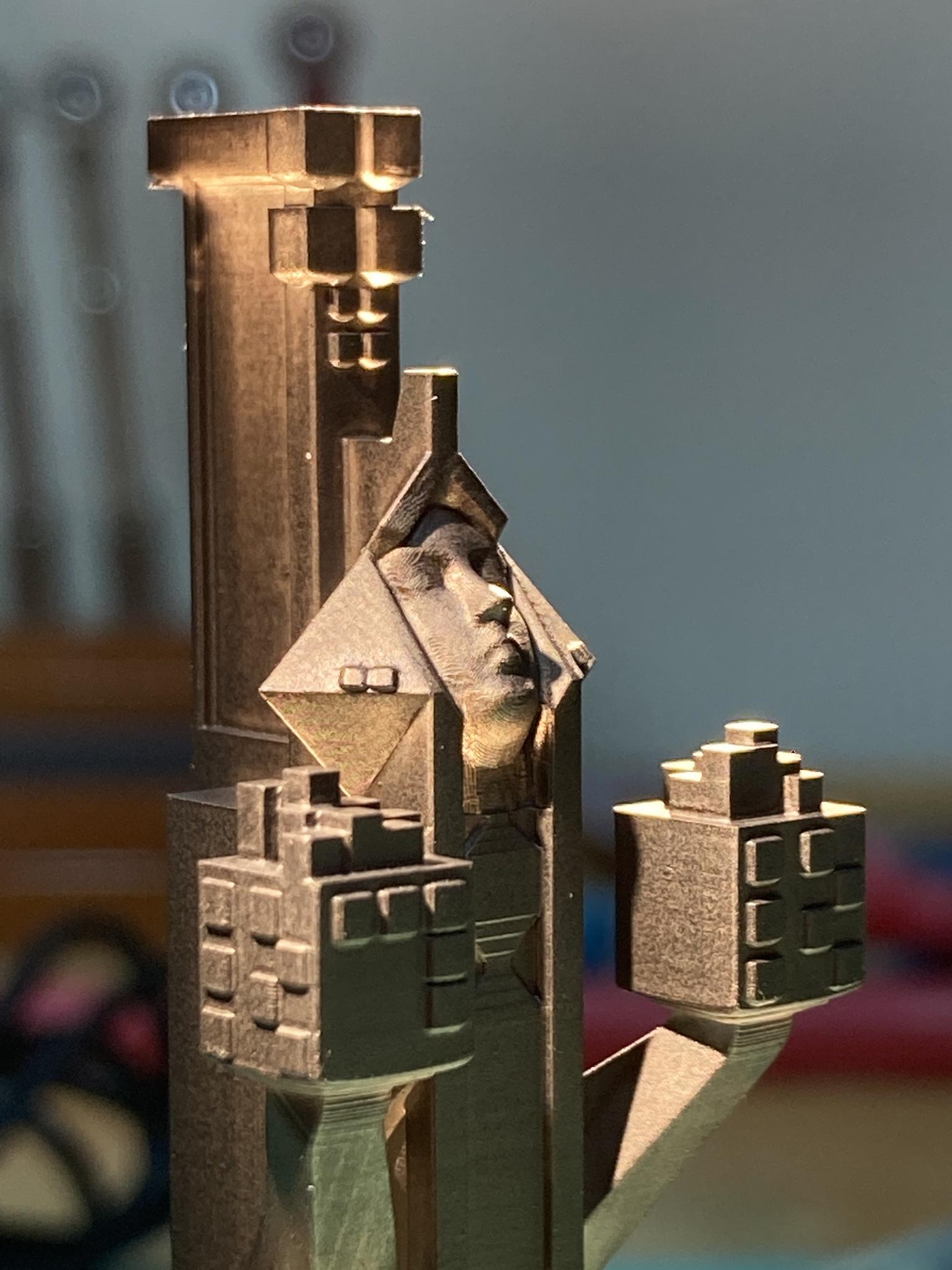 Now if you’ll excuse me, my replacement melting furnace just arrived. Time to get back to the dangerous shit.

so much respect for this architect

This is one of the finest FLW write-ups EVER. And I love that it brings us all back to your current project.

a lot of FLW's work inspires me. It's tough to get past him as a person.

I spent a good week mad at him on the Iannellis' behalf.

That's not a story, that's a habit; he did it ("this vase will look perfect above the mantle" a month later, a bill) to a number of clients.

Back when Henry Ford was just getting started, he paid a pair of young machinists, the Dodge Brothers, with stock. By 1914 Ford was obviously a success but Henry Ford kept rolling all profits back into expansion, rather than dividends as he'd promised the Dodge Brothers. They sued and won and Ford needed to come up with a bunch of cash or go into receivership. So every single dealer got a letter saying "you're a parts and repair center now, pay up" to go along with their massive shipment of spare parts.

Of course, the way the world sees that now is "poor Henry Ford couldn't spend all his money on making the lives of his employees better because of those evil Dodge brothers and therefore CEOs should run their damn companies however they want" instead of "Henry Ford would only pay his debtors if he could shaft someone else into doing it." And the way the world sees the vase thing is "lol Frank Lloyd Wright had such attention to detail that he kept tweaking his clients' houses" instad of "lol Frank Lloyd Wright was such a spendthrift and manipulative asshole that you could never be free of being billed at random for shit you didn't want because he was short on cash."

I've learned in Hollywood that the people you see over and over and over again tend to be easy to work with. The ones with a meteoric rise and abrupt fall are assholes. Or, not necessarily assholes, but not willing to victimize themselves for their art at which point the conventional wisdom becomes "they're assholes."

By all accounts, Frank Lloyd Wright was an asshole. And I honestly wonder what our world would look like if he wasn't. Imagine if that kind of talent was easy to work with.

Fuckin' 80 years later and the Usonian plans are still locked down. But you can pay Lindal, sort of.