Bought myself a new cookbook a while ago - Pure India by Meera Sodha. The dishes are not super simple, but they all look phenomanelly delicious. I tried a dish a few weeks ago, but messed it up because I didn't have enough tomatoes to actually make the red curry sauce. So this time I made sure I had everything ready to go: 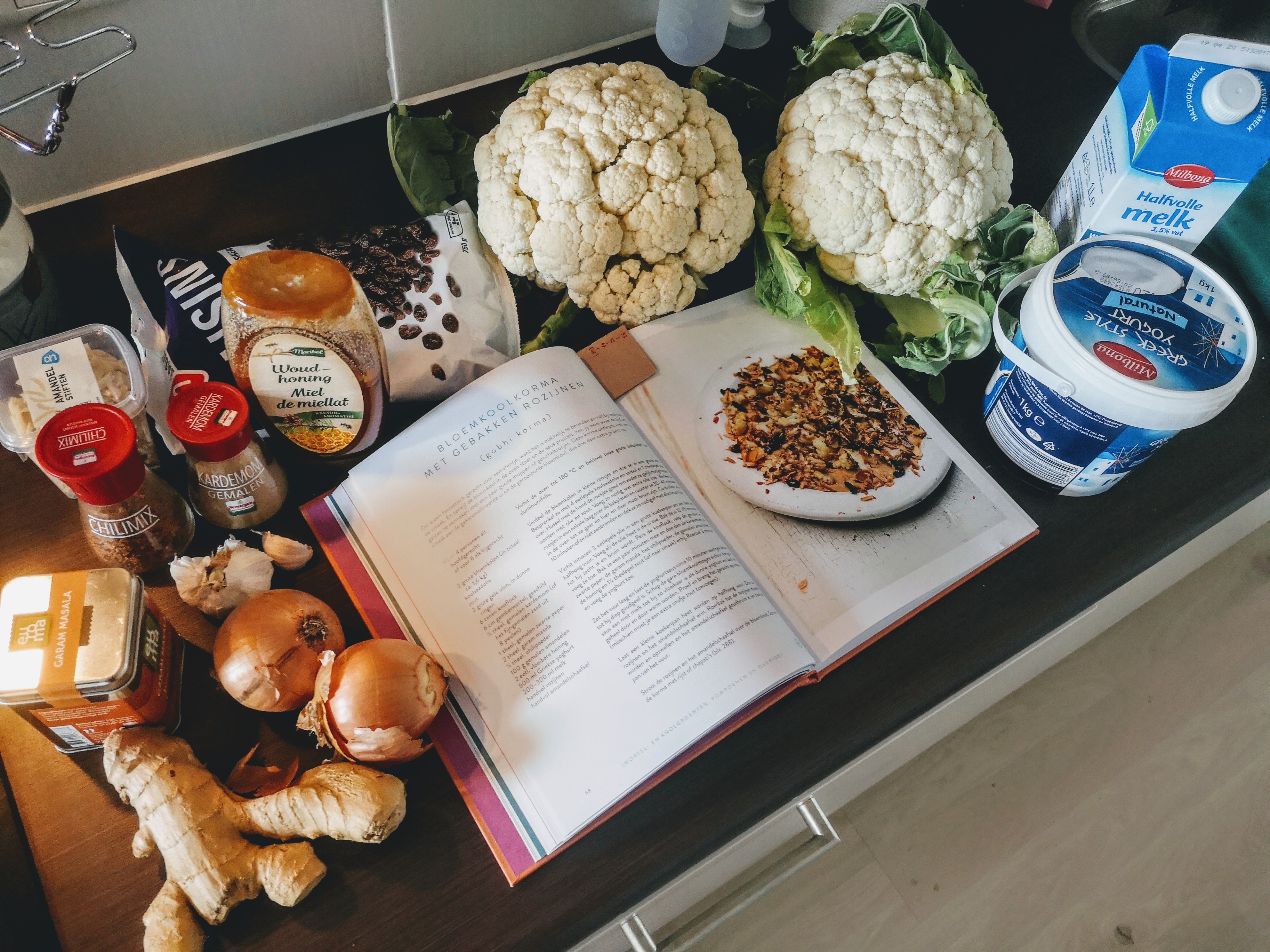 The dish is basically this: roast cauliflower in the oven at 180C, and make a delicious onion-based sauce and raisins/almond topping while you're waiting for the cauli's. The sauce starts off with about fifteen minutes of slowly baking onion, after which you add a whole lotta spices (garam masala, pepper, chili, kardemom, almonds) and a bunch of honey and Greek high fat yogurt. 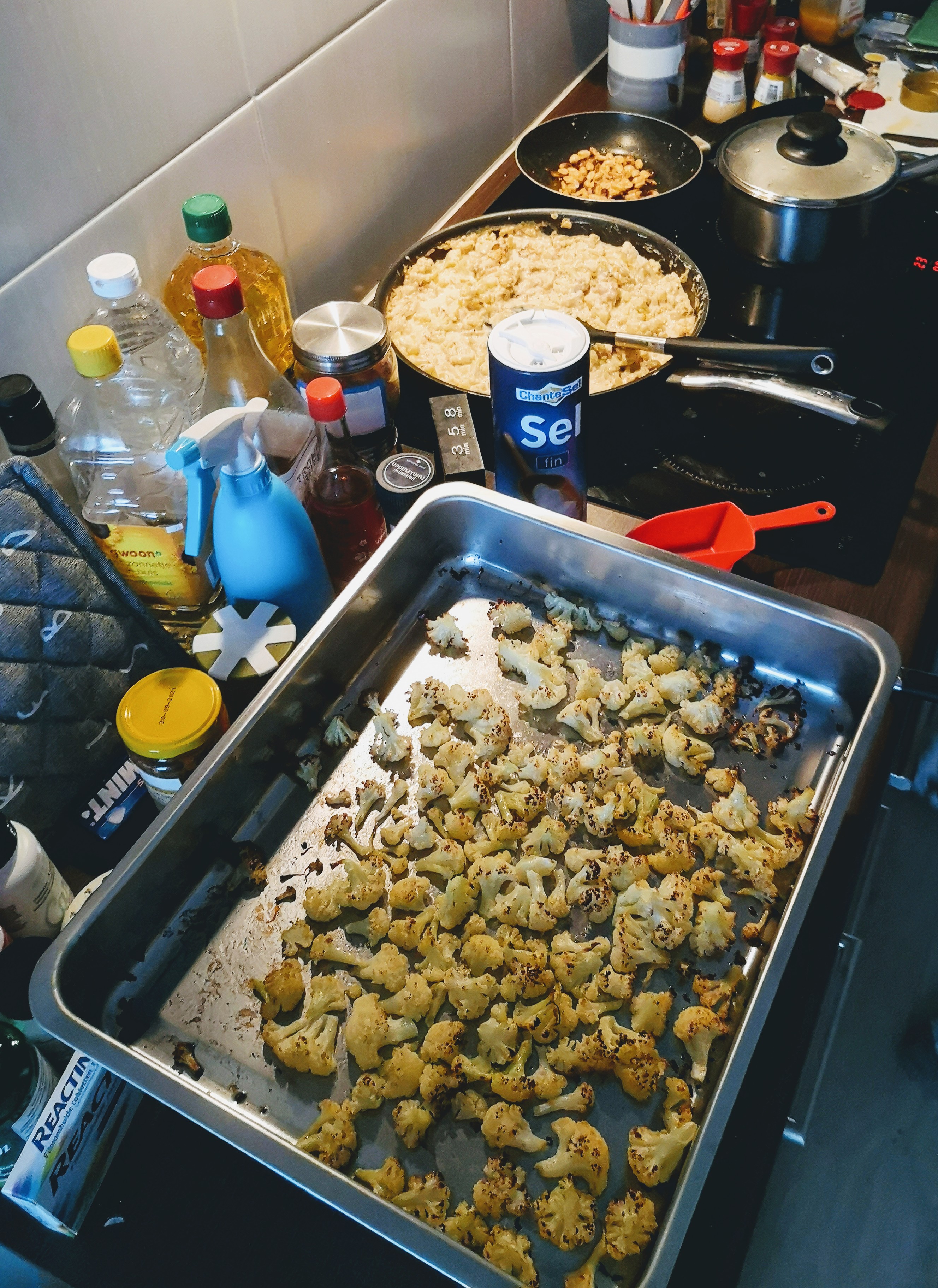 Some rice on the side, which I added some baked & spiced unsalted nuts to, and you're done! 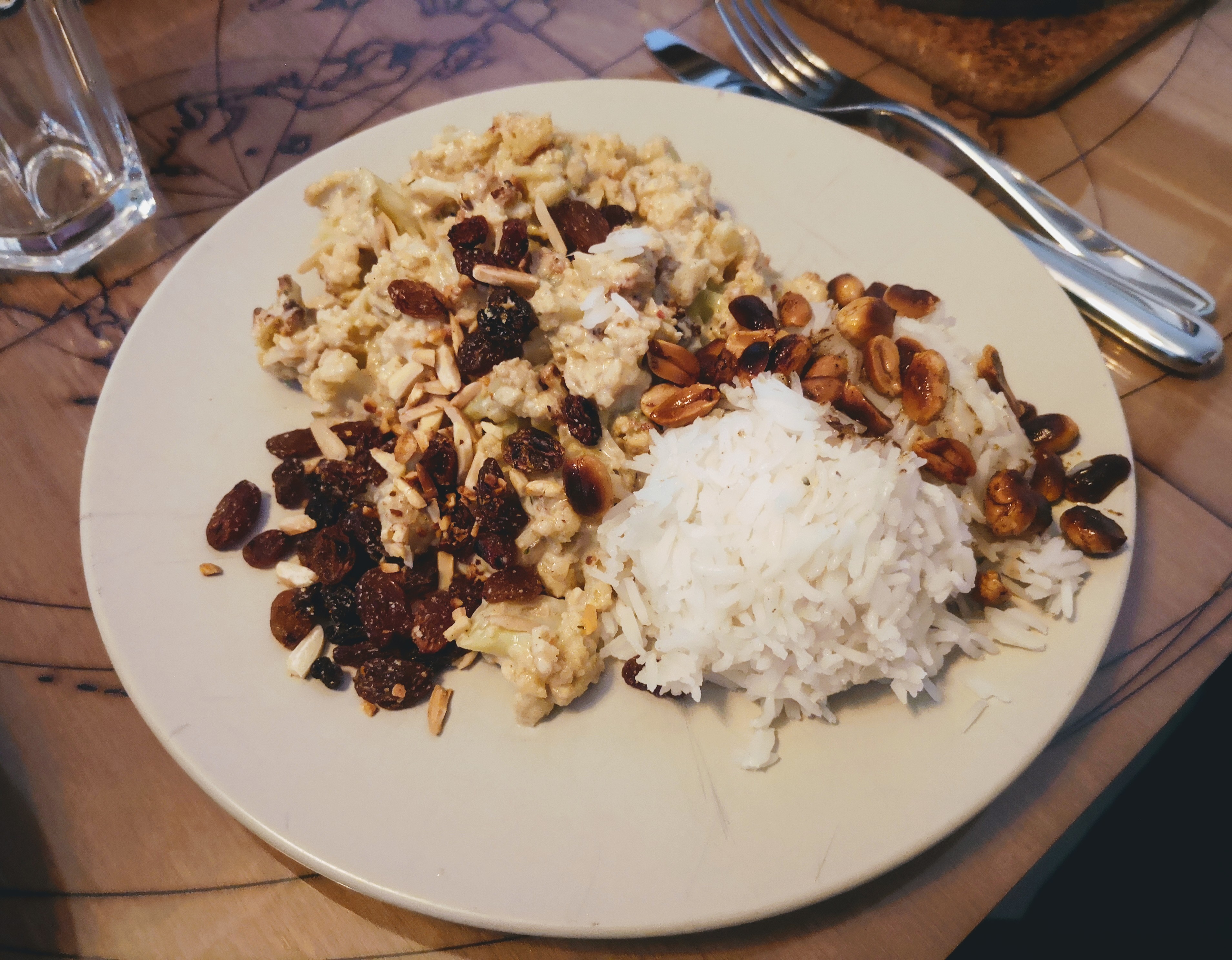 It's not particularly healthy, but it's very delicious. It is also incredibly mighty. (Which is how you say in Dutch that a meal is very... Powerful? That's what Google translate gives me. Food that is heavy like a brick on your stomach.) ike

This thing is like thicc chocolate cake levels of mighty - BOOM, you're full. Prolly the combination of very delicious high fat yogurt and two spoonfuls of honey, it's a lot of fat and sugar. Supposedly this should feed 4, but the two of us barely finished a third of this.

Thanks for sharing - this looks amazing.

after which you add a whole lotta spices (garam masala, pepper, chili, kardemom, almonds) and a bunch of honey and Greek high fat yogurt.

Mmmmmm... are those peanuts in there too (just northeast of the rice mountain)?

Which is how you say in Dutch that a meal is very... Powerful?

Roasted cauliflower's lowkey a phenomenal, very versatile side. My mother roasts them with turmeric as a snack. Cutting the heads the branches to make 'cauliflower rice' is a great mix-up for when I get tired of rice as a carb-base in cooking.

There was a different recipe for various beefed up rice dishes. For one of them I had half of the ingredients, so I gave it a shot and baked some peanuts in nothing but some oil, cardamom, chili and curry powder. Super easy to make! Can serve with some citrus juice, but that has been sold out since the start of this crisis.

Hearty works, although mighty is like a superlative of it. Hearty is like a good protein rich meal after a day's labour. A mighty meal means you're developing a food baby and don't have space for much else the rest of the evening.

Adding peanuts to the shopping list. Gotta try boiled peanuts along the way, too.

A mighty meal means you're developing a food baby and don't have space for much else the rest of the evening.

OOOH yes. This I understand.

I like that idea. Rich might be the idiom you want. Or just heavy if a few hours later you feel gross.

* I might not be the one to trust though, I'm not sure I used the word idiom right

it looks lovely :> maybe i'll make something indian this weekend