Friday is chocolate pancake day, so deadline pressure forced me to put something on paper between slinging batter. Here is another dog, one of Pavlov's subjects. 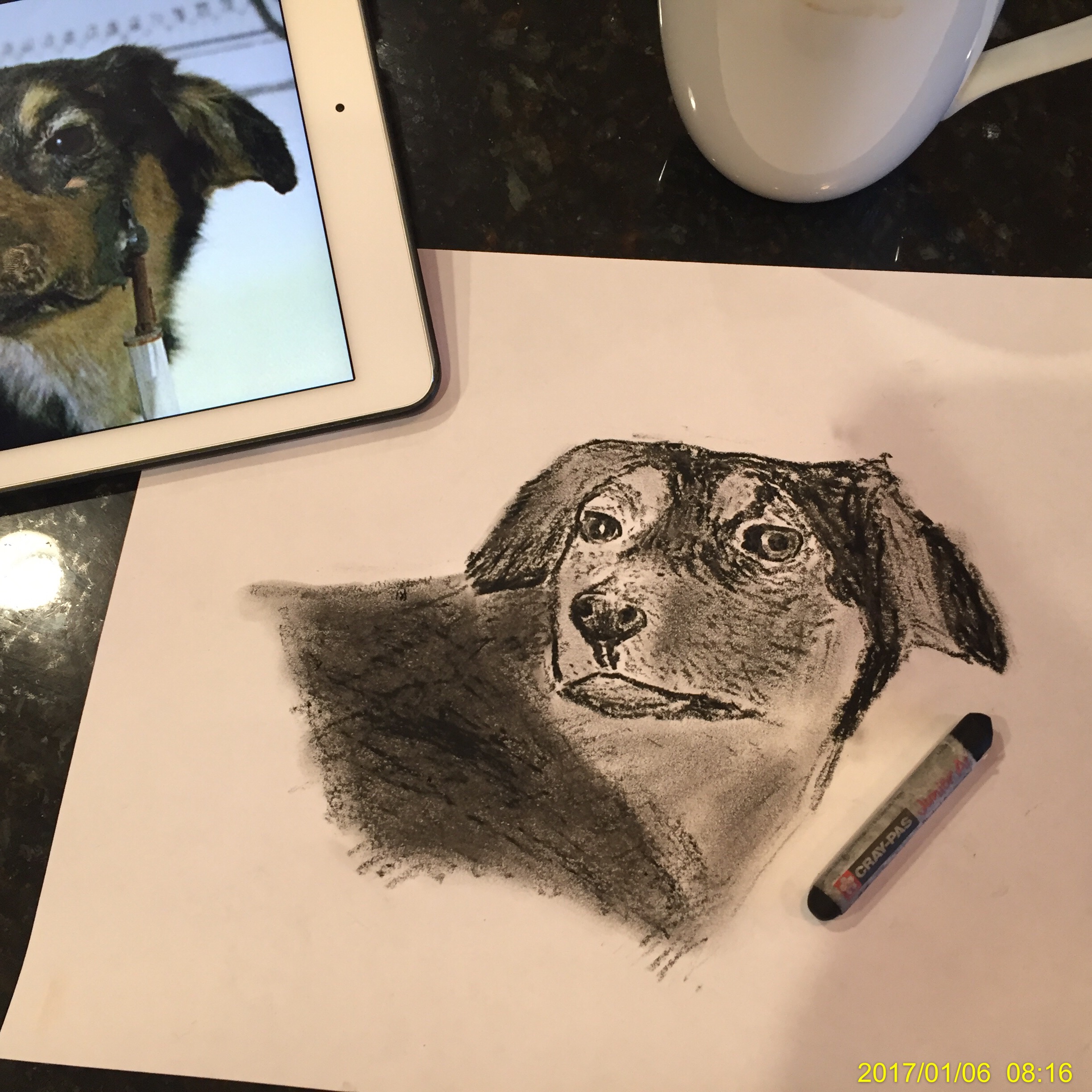 This took about half an hour, reminding me that getting a little practice from time to time is not such a commitment. Perhaps any artists around could suggest improvements to my method:

5-10: Lightly pencil an outline to get the proportions right. They aren't right. Trace the iPad. Artistic license.

15-20: Eye on the right. The eyes are not symmetric. The eyes in the model aren't symmetric either. It's a photo of a stuffed dog. Try to be faithful to the model, to avoid making it worse.

25-30: More rushed shading and finger-smudging to even out the rough lines. Show it to the kid. He looks up from Wimpy Kid and says "Wow." It's not so bad from a distance.

Earlier effort to depict a Russian dog on TNG's post:

Your dog has a pupil, but the dog on the iPad doesn't. That's your brain drawing, not your eye.

You drew a pretty good dog. Do not see fur, do not see the dog, but draw the shapes of light and dark.

draw the shapes of light and dark

That could be a quote from the film. Did you see it? "I'm an idiot at this," he says, before painting a remarkable portrait in a few hours.

Here's my current project. The entire time I am trying to avoid thinking about lighthouses, water, or anything of the sort. Especially when I am using a small brush. 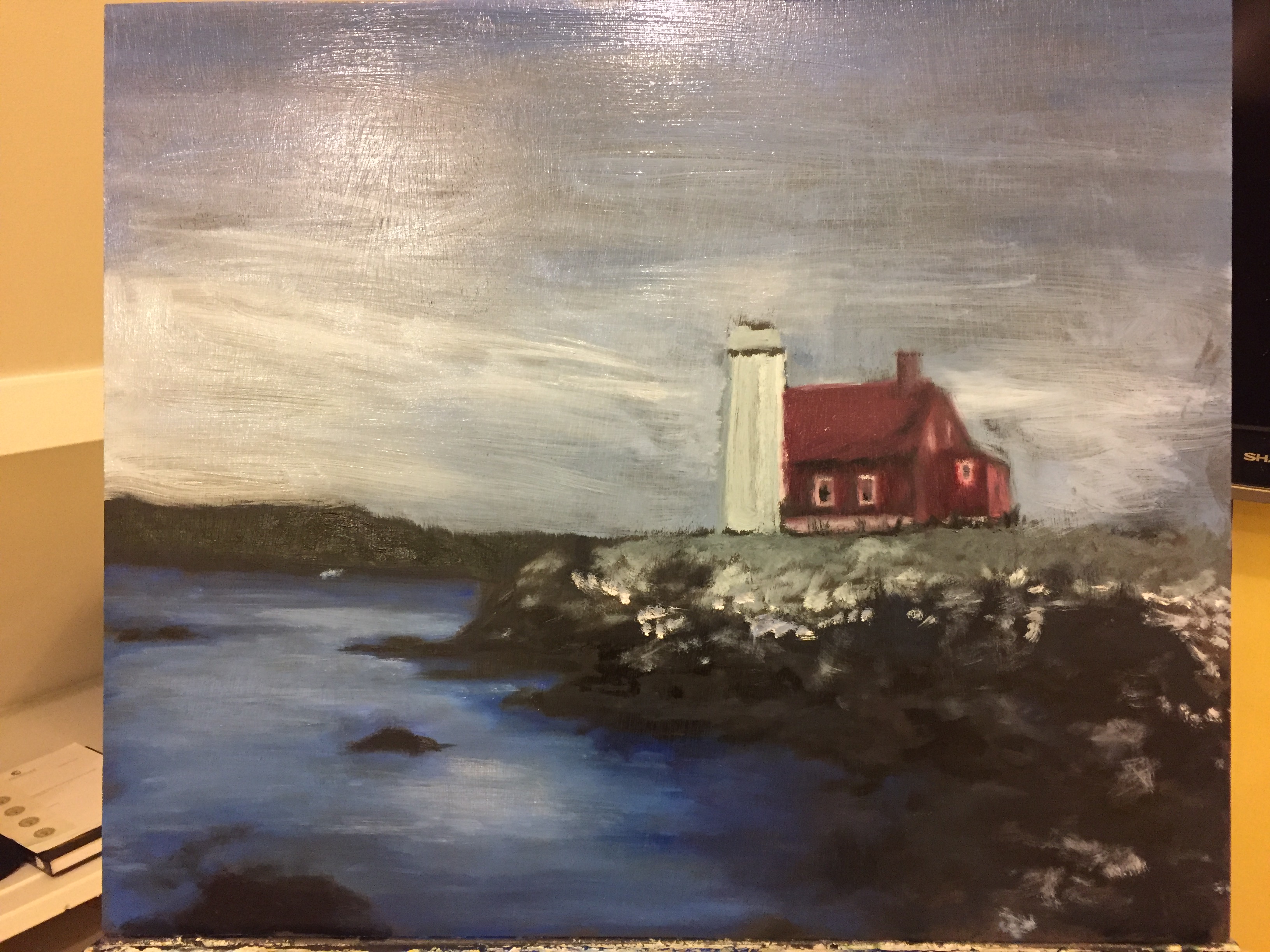 When I tweak the lighting/atmosphere at the end, then I'll allow myself.

Hope this isn't a spoiler, but I think you'll be pleased to find a very pretty lighthouse when you step back and look at your picture.

A friend is taking some oil painting lessons. He got some good results, despite little experience. So I shopped for some oils, looking for cheap primary colors to start. The nearest I could find is a set of eight or so colors, in very tiny tubes. Is paint such a big expense?

A little tip, don't cheap out on your paint brushes. You don't need the most expensive ones but don't buy the cheap ones unless you want a million brush hairs on your piece.

It's not cheap, but a little paint goes a long way, and you can mix to get the range you want. You'll want some liquin and some linseed or walnut oil to mix with the paints to thin them and get different textures.

I paint on plywood because I think canvass is a pain.

We watched Tim's Vermeer last night. Really interesting. I have little doubt that Vermeer was doing something like that. It changes his art for me. Now I see it an amazing labor, but accessible.

I haven't seen it yet. Just watched that though. That's basically the trick I try to do in my minds eye. I try to paint the light, not the objects.

That said, I think that is the starting point for interesting paintings. If you can achieve that technically, then you can vary it with purpose.

I'm pretty sure that you sent me a dog picture once. You cleared all the scraps off your desk, put them in an envelope and sent them to me.

Any protest plans for the 20th? Or just plans?

I recall that was another Laika effort in the Great Dogs of science series.

We have a guest arriving from Sweden that weekend, so we will probably pretend that everything is normal. In fact, that's my long-term plan too.