Chances are, we'll get along.

I read your comment a few days ago, and it's stuck with me. While I agree with some of the comments already posted about how Jefferson's acts are likely beyond anything shameful any of us have done, your general sentiment with cancel culture is one I very much agree with.

Note, I'm now talking about modern day cancel culture about those who are alive and not so much the specific Jefferson situation.

"There currently no room for growth for the living in this culture."

I like this line you wrote a lot. When a person is cancelled today, they're tossed to the garbage, left to either rot or figure out their growth on their own. I could certainly imagine an idealized version of our culture where when a person is called out on their past infractions, their community comes together to re-educate this person, to help them dissect any childhood experiences or traumas that would have shaped them to be a person who's behavior would result in the harming of others. Either this or some sort of center where a person could go to learn. The premise of these ideas is essentially that any group/culture/society is only as strong as its weakest link, so why not focus repertory energy on those in need of the most assistance?

Often when a person is cancelled, it's done so in a public way in which the person being cancelled doesn't have the ability to offer their perspective, or even to apologize/address all those that are now aware of a person's past mistakes. I was recently talking with a friend about this, she is a self identified Christian and practices her faith. She proposed a theory that cancel culture could be exacerbated by the decline of Christianity. She was saying that Christianity places a strong importance on forgiveness, and as the decline of this tradition increases in the US, more people get cancelled. I'm aware this talking point brings up a whole separate can of worms (let it be known I do not identify as Christian and broke ties with those grows after growing up in a Souther Baptist church) but the main point here is that people are finding it easier to extend an accusatory finger instead of a helping hand.

Wooo please let me know your thoughts of a deeper listen, I’d love to hear your perspective.

Yeah I’m actually playing most of the instruments, though there’s also a healthy amount of midi instrument manipulation going on.

White Trapezoid was built around a recording of a public performence a friend in Mexico City sent me of him playing the hompax (Mayan trumpet) with a friend of his on mouth harp. It was fun to flow along with their grooves.

Muahaha you know about the dialects! That's rad. My dad speaks Yucatec and that's the dialect Adolfo is speaking here.

Thank you for the kind words about my art, I really appreciate it 🙏🏽

Embracing Change has already sold, so I'll have to check with the new owner to see if they're down to have me sell prints. If so I'll prolly do a run of 15 or so and def keep you posted.

steve thank you for the kind words, they warm my soul

Thank you, me too. It really bites to be experiencing this at 29 years of age.

I love the vibe of this track!

I'm actually dealing with a bulging disc in my spine right now so playing an instrument is not really something I'd want to engage with right now.

That's such a great idea, considering so much has changed.

In fact, in this painting, I show myself in a video chat on a phone with three friends.

As a result of some intense tension, partially influenced by Covid, I no longer speak with those people.

A year later recap painting would indeed be much different.

definitely hit up fogg4444 with any feedback, he's tackling the project solo

That's actually relatively surprising, I've always imagined you have an infinite stock pile of guitar or piano tracks waiting to be added to

I'll send you a message with a lil more information

thenewgreen would you want to try to create a collaborative song using this app as opposed to Soundcloud?

Damn dude I hear that.

The best mixing experience I've had was when I was there with the producer for every moment of the mixing process.

I crashed at his house/studio for a week straight during the recording and mixing process.

Fortunately he's a really good friend and gave me a homie rate of twenty-five an hour, and took a painting of mine as payment.

As you can imagine we spent a lot of time together mixing a two hour contemporary jazz album.

10/10 would do again, I was much happier with the result than any of my former recording experiences.

vertical and breathing, I suppose that's somewhere on the positive spectrum of things.

if my memory serves me correctly you have a rad music creation station in your basement, is that correct? If so, are you still making tunes?

kleinbl00 I heard you were on the call, I'm sad to have missed you. I hope you've been well

I have friends who needed up going out to the desert, they say there were about 3k people out there. Though because there wasn't an infrastructure of any kind the situation was more challenging than it already inherently is.

c_hawkthorne has been putting on a few video calls

hahaha what a wild restriction!

hmm okay I'll check it out.

Though I'll be frank right now I'm working on releasing the electronic EP before year's end, so I'll be going wild on that for a few weeks most likely

Also I realized that pandemic or not, that virtual atmosphere of that call is likely how we'd have connected for this event regardless

found the image of elizabeth and myself at Burning Man 2018 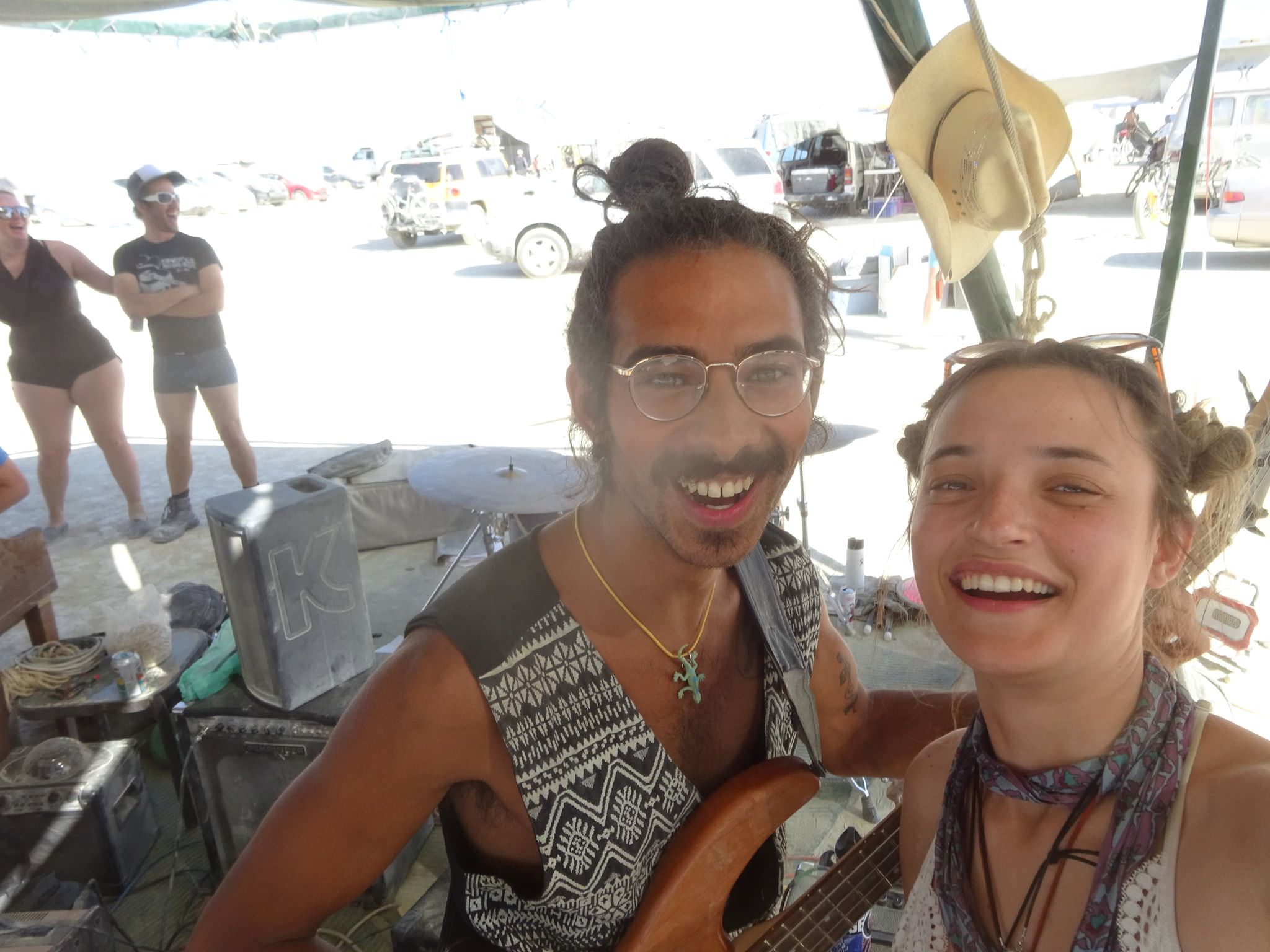 Woah, this is quite a departure from what you've posted before.

I use Logic as well, would you be down to share the project with me? It'd be really cool not only to add bass in this way, but also to explore how you came up with this odyssey

I have a virtual event until 8 Central tonight but I'll hop in after!