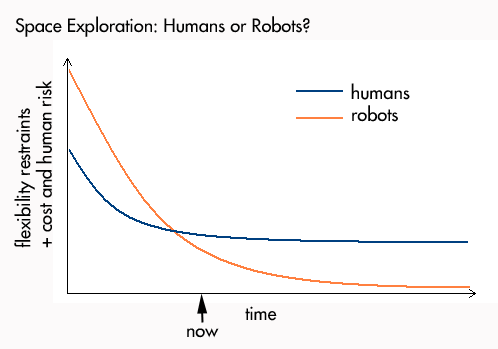 I think the window on human space exploration might have closed.

I have always been fascinated by space exploration. I find the possibility of a human Mars mission particularly compelling. I have been a member of the Mars Society, read Robert Zubrin's "The Case for Mars: The Plan to Settle the Red Planet and Why We Must", Kim Stanley Robinson's Mars trilogies, and have closely followed the Spirit and Opportunity Mars rover missions. I am very excited about the prospects of the Mars Curiosity Rover, which is due to launch in November of this year.

I have long expected that I would see people step foot on the red planet during my lifetime. As I am in my mid-thirties, I never considered that this was unlikely.

However, while following the exploits Spirit and Opportunity, this question came to me:

Have robots permanently become the most attractive option for space exploration?

I think the answer to this question comes down to this:

Due to the advances in robotics and artificial intelligence over recent years, and the certainty of advances to come, I think we may have reached a point where robotic space missions will forever remain to be more attractive compared to human missions.

I feel that the only exception to this situation might be due to a great need for humans to "experience it personally"; but unless the costs of space exploration can be surmounted by a small group of individuals that share this desire, I think this factor will not counter the obvious benefits of using robots.

I hope I am wrong, but my gut tells me that I am right. Of course, there may be a point in the future where human space-exploration becomes much less expensive and risky. However, I am currently reconsidering my own chances of witnessing it.

Ehh, I don't think it's really a yes or no question.

There are many obvious advantages to sending up unmanned spacecraft. Not necessarily "robots", per se, but complex spacecraft and instrument payloads. You can't exactly send up a dude and tell him to roll down the window, stick his hand out the door, and report back the ion species and energy distributions as you're passing through a region of interest. His buddy over there has shaky hands from his morning coffee, so the values he recorded from his handheld magnetometer are a little smudged.

In a nutshell, space science is best left to robots, aside from the science that pertains to humans' ability to survive in space and on extraterrestrial bodies. And we have the gist of that figured out. We know that we have some serious problems to overcome before setting up a sustainable colony anywhere outside of LEO, even at one of the lunar poles.

Everyone is Mars crazy right now. Sending anyone there without some Caterpillar-esque heavy machinery to burrow deep under the surface is a death sentence. Mars doesn't have a magnetosphere, and the atmosphere is ~300 times less dense than Earth's, so it has no mechanism to shield us from galactic cosmic rays or solar radiation. Talk of a Mars mission in the 2030's is still ridiculous to me, unless we're ordaining it the new Australia and upholding capitol punishment. We will have to send HUGE payloads to Mars to conduct some serious terraforming, and the odds are that even if we do all of our homework right, the process will take centuries before it's habitable in any sustainable way.

Right now, it does look like it's best to hand off the baton to the bots. Eventually, we will work alongside them on multiple colonies, after they've made the bed for us. And, from a cost perspective, mk nailed it in his analysis. The QA is already bad enough for unmanned missions (my most recent rant here), and risking human life will hike up your costs another order of magnitude or so. Again, we can just solve this problem by treating early colonization missions as capitol punishment, or sending up borderline-suicidal astronauts, but some of us have morals and shit.

Eventually, we will work alongside them on multiple colonies, after they've made the bed for us.

I wonder about this. If we try to put a date on it, optimistically, we are at least 15 years out. Realistically, it's 25 or more. It is reasonable to assume that AI will be so improved over that time, that robots will not only be almost as mentally flexible as humans (if not more so), but physically they will be leaps and bounds ahead.

At that point, I think we are left with the question: Why are we going to Mars?

As an aside, since Mars has 1/3 the gravitational pull, the machinery required to build underground bunkers might not need to be that heavy. Soldiers built bomb-resistant shelters in WWI by hand. My father often had to dig two foxholes in one evening in Vietnam. Given a few days, a few people might be able to make an impressive bunker with dirt that is so much lighter, and any ceiling materials could hold that much more. I think I read that about 2 meters of dirt would provide adequate protection. You could start at a bluff, fill sandbags, etc.

Yeah, too true. I just still see that leading to an all-too-familiar scenario in which we visit a heavenly body without the intention of establishing any permanent and sustainable presence. We'd plant our star-spangled banner, and then die, at best maybe one or two generations later. There's no incentive for any one country to fund a colonization effort.

The only way I can envision a lasting Mars base is if every first world country decides to scrape together a program primarily intended to guarantee the survival of our species. Obviously that's not happening anytime soon.

thenewgreen is right, I'd be curious to hear your thoughts on this three years later.

Unfortunately, my view hasn't changed. The political will and social impetus for human exploration don't seem any greater, and the nations that are most able are shrinking relevant programs rather than expanding them.

The quality of robotics seems to be increasing at an accelerating rate. At the same time, the Mars rovers have demonstrated a great return on investment.

Both lines are falling, but I feel that the orange one is doing so more quickly.

I have a more optimistic view of private sector space exploration, but it may be based simply on a lack of recent reading. Private launch companies are using robots/unmanned probes right now, but surely at some point they will branch to manned flights, given that their stated purpose tends to be putting people on Mars for an extended period of time.

Mike, I'm interested to know if you are still as hopeful as you once were? It seems to me that the colonization of Mars is a very real and attainable goal and one that Elon Musk is serious about.

+discuss
+discuss
timeh  ·  3707 days ago  ·  link  ·
>I feel that the only exception to this situation might be due to a great need for humans to "experience it personally"; but unless the costs of space exploration can be surmounted by a small group of individuals that share this desire, I think this factor will not counter the obvious benefits of using robots.

Maybe competition between countries could be another reason. If China was to try, the US would have to try too.

+discuss
+discuss
alpha0  ·  3711 days ago  ·  link  ·
Militaries have a keen interest in weaponizing space, and if machine intelligence proves too limiting the cost equation may change.

I find the notion of altering human genetic makeup (somewhat) repugnant myself, but it seems genetic engineering is delivering on its promises where strong AI has not (and may never do so). So it is a distinct possibility that some form of 'humanoid' will be shooting off lasers in anger in deep space or maybe on even on the surface of Mars, at some point in the future.

On the social front -- and this is a morbid futurist vision, I will admit -- if the current (global) social stratification trends continue, one can project ahead to a future where a tiny subset of humanity may elect to 'move up' to the orbit and control 'their plantation' from space. The cost equation here (for the said subset) would include variables such as 'livability', 'security', and 'control'. (I know, it's alarmist scifi ;)

+discuss
+discuss
greedo  ·  3711 days ago  ·  link  ·
This article talks about the cost and risk of human Mars exploration: http://www.space.com/11417-mars-missions-space-travel-challe...

This part made me very sad: "If sufficient funding is made available, then scientists (and) engineers should be able to develop and integrate the required EDL components necessary for human Mars missions within the next 30 years. If not enough resources are allocated, this timeline might not be feasible."

30 years! Robots are going to be discussing space exploration in 30 years. :(