The industry grew exponentially; aggravated customers began to wail to their government representatives. In 1991, Congress passed a law that curtailed some telemarketing activities and created the first Do Not Call registries. Unfortunately, the registries weren't maintained by the government but by companies doing the telemarketing, and the only way to get on them was to call the companies themselves. Nothing changed.

By 2003, the national telemarketing crisis had grown acute enough to warrant bipartisanship. A nationwide Do Not Call Registry would be established and the FTC would administer it. The House bill to create it passed 412 to 8. Only Ron Paul, Jeff Flake and a handful of other shrink-the-state types dissented. George W. Bush marked the occasion with a Rose Garden announcement. "When Americans are sitting down for dinner, or a parent is reading to his or her child," he said, in dad-voice, "the last thing they need is a call from a stranger with a sales pitch." Telemarketing groups would have to pay to download lists of numbers on the registry, organized by area code. If they were later found to have called any of those numbers, intentionally or not, they could be fined up to $11,000 per call.

All but telemarketers were elated. In three months, 50 million people signed up. Syndicated columnist Dave Barry called it the most popular government program since the Elvis stamp. The industry, meanwhile, filed several lawsuits against the FTC, arguing its new toy violated their First Amendment rights. "It will be like an asteroid hitting the Earth," predicted Tim Searcy, then the chief executive of the American Teleservices Association. "Two million people will lose their jobs." Barry, capturing the national mood, responded by printing the ATA's phone number in a column and suggesting his readers flood it with calls. The lawsuits failed, the Do Not Call list became a permanent fixture, and telemarketing never recovered.

"It changed the industry dramatically," says Stuart Discount, CEO of the Professional Association for Customer Engagement, which is just the new name of the beleaguered American Teleservices Association. "A lot of the outbound calling became calling your own customers, trying to increase their value. Cold-calling or trying to sell something really took a hit." Set aside that it was now verboten to dial a wide swath of the country. Would someone on a Do Not Call list really be receptive to an unsolicited sales pitch? The registry, says the FTC's Kopec, was "the nail in the coffin for outbound telemarketing."

It was an era of good feelings and uninterrupted square meals. And it ended almost as soon as it began.

By downloading the list of numbers on the Do Not Call Registry, and then declining to call them, telemarketers largely policed themselves out of existence. By the late 2000s, though, a new threat had emerged: robo-calls. Instead of live telemarketers, working for recognizable companies, a new breed of humanoid irritants came calling with all manner of crappy sales pitches and outright scams. Robo-calling itself was not new; a robo-call is just another word for a prerecorded phone message. Public schools have been using them forever to announce snow days and two-hour delays. But now, the technology — far more efficient than traditional telemarketing, in that a live human is needed only once a customer decides to engage — was being marshaled for profit and fraud.

Suddenly "Rachel from Cardholder Services," the ubiquitous fake bank rep, was plotting to take your money. Around tax season, fake Internal Revenue Service agents came calling, too. They left menacing messages like, "This is a final notification call to inform you that there is an arrest warrant issued against your name and your identity." From there, targets would be directed to call a number where an operator would be waiting to bilk them. In one scheme, victims were commanded to drive to their grocery stores and pay phantom back taxes in the form of iTunes gift cards. For their part, legitimate companies began outsourcing illegal robo-calls to third parties. (Last year, a federal judge hit Dish Network with a $280 million penalty in part for doing that. Dish Network says it's appealing.) And none of this includes the related problem of spam text messages.

Although the Seventh Circuit suggested in dicta that the damages award was constitutionally acceptable, it held that the District Court erred because it only considered DISH’s “ability to pay” when calculating the award. The court stated that the analysis should “start from harm rather than wealth, then add an appropriate multiplier.”

In 2009, the FTC responded by outlawing almost all robo-calls, exempting those from political organizations, schools and other entities not trying to sell you things. Now, it was not only illegal to call a number on the registry, it was illegal to solicit any customers using robo-calls. The ban had no perceptible effect. From 2010 to 2011, the number of annual Do Not Call complaints jumped from 1.6 million to 2.3 million, the largest increase since the list's inception. The following year, the number rose again by nearly 70 percent. Last year, the FTC received a record 7.2 million complaints, and the calls were as disreputable as ever. The top violations reported were debt-reduction schemes, vacation and timeshare offers, warranties and protection plans, and impostors.

At the root of this public relations problem is a likely misapprehension about how the Do Not Call Registry works. When you add your number to the list, nothing actually happens. No legal muscle or technological wizardry suddenly prevents a solicitor from calling you. All the list does is provide you with vague recourse in the event you are called, by allowing you to complain that someone has called you.

Since the robo-call ban went into effect in 2009, the FTC has brought just 33 cases against robo-callers. In those cases, defendants have been ordered to pay nearly $300 million in relief to victims, and nearly $30 million in civil penalties to the government. But even then, the FTC can't force perpetrators to pay the fine if they argue they're broke. Which robo-callers often seem to be. So the FTC has only collected on a fraction of those sums: $18 million in relief and less than $1 million in penalties.

Finally, there's the problem of the telecom giants that do nothing. As the FTC pushed its boulder and the start-ups chipped away at it, major telephone carriers stood and watched, claiming they didn't have the authority to address the problem. For good reason, Washington has been loath to tell phone companies to censor calls. Still, if carriers weren't going to block the illegal calls plaguing their own customers, the problem seemed likely to persist.

A year later [2015], the FCC woke up and voted to allow carriers to offer their customers external call-blocking apps like Nomorobo on their landlines.

Finally, in November 2017, the FCC gave carriers the power to block certain illegal robo-calls directly. Now, on the horizon — perhaps — is a moonshot called Caller ID authentication, which would function like the blue Twitter check mark that verifies a user's identity. Developed by a consortium of telecom providers, it's being tested by AT&T, Comcast and others.

Robo-calls are unstoppable. Why your phone won’t quit ringing.

It doesn’t matter whether you’ve signed up with the federal Do Not Call Registry, although companies that call numbers on the list are supposed to be subject to large fines. The robo-callers ignore the list, and evade penalties because they can mask the true origins of their calls.

A how-to guide to stop spammers and exact revenge

3: Get a robocall-blocking app.

I recommend starting with the free YouMail, which won my robocall speed test.

If you don’t want to give up your voice mail, the most effective option is Truecaller...

The simplest app, at $2 per month, is Nomorobo, one of the first robocall blockers on the market with a popular service for home lines. Nomorobo doesn’t sell your data or monkey around with your voice mail or calling apps, and it’s smart about blocking spoofed calls that appear to be from neighbors.

The $4 per month RoboKiller, which ranked second in my speed test, takes over and fingerprints your voice mails but adds a clever twist — “answer bots.” They’re voice-mail messages that try to keep robots and human telemarketers on the line listening to nonsense.

Another service, Jolly Roger, doesn’t sell itself as a robocall blocker but takes this auto-generated-annoyance idea a step further by actively trying to game the spammers’ systems, such as when to press 1 to speak to a human. It calls this tech “artificial stupidity.” It costs $11.88 per year.

The ever-worsening scourge of robo-calls is receiving renewed attention in Congress, where top Democrats and Republicans this week are set to take an early step toward cracking down on scammers who prey on consumers’ phones.

Under bipartisan legislation, called the TRACED Act, the U.S. government would gain more power to slap these lawbreakers with bigger fines, while prodding AT&T, Verizon and other carriers to improve their technology so that consumers can more easily figure out if calls are real or spam.

The proposed law would also set regulators’ sites on carriers, including the big four, AT&T, Sprint, Verizon and T-Mobile, giving them 18 months to incorporate new technology in their networks that can verify if a call is coming from a real, operable number. The system, known to industry insiders as STIR/SHAKEN, could result in wireless carriers displaying more useful warnings to customers whenever they’re receiving a suspicious call.

All four carriers have pledged to adopt the technology, but consumer groups fear their timing could slip into 2020 or beyond absent a mandate from Congress.

UPDATE: The TRACED Act passed "mandating that originating and terminating phone companies implement STIR/SHAKEN in the IP (internet protocol) portions of their networks by June 30, 2021."

Emphasis added here and there. I ignored a spam call while typing this up. I am a customer of a carrier and handset maker that work together to make these calls less annoying. 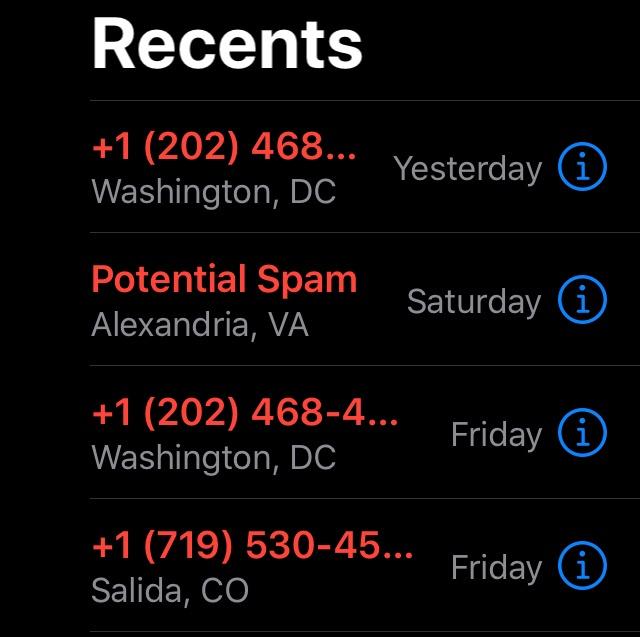 As I'm sure is true fore everyone, almost all my robo calls come from the same area code and often the same first 3 numbers as my number. I always mark them as spam. Google's spam detecting AI is so bad that it hasn't yet started blanket blocking all unknown callers that meet that criteria. If only you could set your own rule...

We call these calls the neighbor scam.

You can block these types of calls. In the app tap on the Block List (circle with the line through it along the bottom.) Then tap on the "+" and select "Numbers that begin with." You can then input any area code or prefix you want. You can also block by country code this way.

Google probably has more to lose by blocking calls from a neighboring doctor (or political candidate) than allowing a junk call to go through. Until the FCC acted carriers were prohibited from “censoring” sales calls.

I have my phone set to block unknown numbers which is great right until I take my cats to the vet and have to wait in the parking lot because pandemic and then they call to update me and it goes straight to voicemail. Since it shows as a missed call I called them back immediately, but it's still annoying.

I turned blocking off after that but recently turned it back on when one day I was getting a robocall every hour.