Charles Hughes, who worked in labor relations at Texas Instruments and IBM, would establish his Center for Values Research in 1974, dedicated to assisting “organizations that choose to be union free.” He would train over 27,000 managers in using his Employee Attitude Surveys (EAS) to screen out likely union members, and would boast, “We have never had a union-free client become unionized.”

Fuckin' genius, that guy! 25 years after the Taft-Hartley act, in the midst of American off-shoring, nobody reversed the arrow of time! 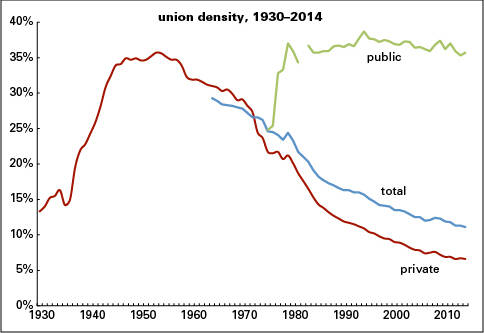 Missed in this entire discussion, however, is the reality that any QA/QC procedure attached to hiring tacitly acknowledges that the employees are components, not individuals. The union jobs of the '30s were largely the operation of machinery which was almost entirely automated by the '60s. The personality tests of the '10s and '20s are designed for unskilled labor that, due to regulatory arbitrage, is still cheaper than robots.

Emily Guendelsberger did a stint at a call center, a stint at Amazon and a stint at McDonald's for this book. She went through training at two of the three and at the end of six weeks, she was the only one in her training group still employed. At the McD's in San Francisco minimum wage was over $13 an hour and she was still one of the few employees to last longer than six weeks. These are miserable jobs that, for reasons of inequality and overcapitalism, are cheaper to hire than automate... but that won't continue for long. Would Amazon replace every human working for them with robots? 100%. McDonald's? Certainly. Call centers? I mean, I've programmed in callflow designers. There's a reason you can't ever get anyone at Google on the phone.

So while it's sneaky and underhanded to get rid of union agitators, it's also important to note that the jobs only exist because they're paying so little it isn't worth automating. We can get mad at the companies for maximizing their profits through ditching everyone who resents the pain but we should also acknowledge that all these jobs are gonna be gone soon and then what the fuck are we gonna do?

There are 5 million fast food workers in the United States. 2 million truck drivers. 1 million warehouse workers. ANY unionization in unskilled labor is basically just hastening automation. And to me, that's a bigger problem than personality tests.

There's so much about this topic that has made me into a crazy conspiracy person. Being worried about not enough jobs while everyone is expected to work bad schedules. Cashiers and call centers not being automated yet while immigrants etc. get all of the hate for the overemphasis of "upselling" of large businesses. I personally feel like unions are painfully inefficient, but FAANG companies etc. have bought out such an overwhelming amount of their competition there's no other option to deal with monopolistic-like practices that have taken all over. Seeing students working until 5am (in untipped positions) for ultra-spoiled people to celebrate a wedding and say they used to do the "same" job and it was easy (while they get carried by people who actually care doing everything). I'll probably check out that book

I wholeheartedly recommend it. She's a great writer and she interweaves "this is why all these jobs can't help but suck" in among "this job sucks."