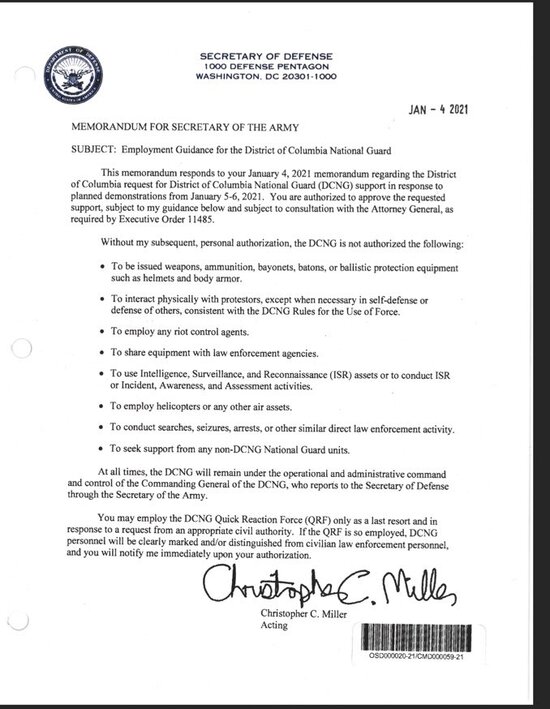 The president, Miller recalled, asked how many troops the Pentagon planned to turn out the following day[, Jan. 6th]. “We’re like, ‘We’re going to provide any National Guard support that the District requests,’” Miller responded. “And [Trump] goes, ‘You’re going to need 10,000 people.’ No, I’m not talking bullshit. He said that. And we’re like, ‘Maybe. But you know, someone’s going to have to ask for it.’” At that point Miller remembered the president telling him, “‘You do what you need to do. You do what you need to do.’ He said, ‘You’re going to need 10,000.’ That’s what he said. Swear to God.”

It's almost like Trump knew things would get, um, rowdy, in tandem with (almost surely) being the one giving the order to neuter any troops that would be called in. Do you think Miller knows that he's incriminating the president, here? Seems like a toss-up, to me.

Hmm, I wonder if there's an ongoing investigation. lol

Consider the context: Trump’s increasing desperation on Jan. 6 as the walls closed in on his prospects for holding power.

> More than 60 courts had rejected Trump’s unfounded legal attempts to overturn the election.

> On Jan. 2, Georgia Secretary of State Brad Raffensperger had refused, in an hourlong phone call, to knuckle under to Trump’s pleas to alter the Georgia vote count.

> On Jan. 3, Trump was stopped from replacing then-acting Attorney General Jeffrey Rosen with Jeffrey Clark, an assistant attorney general working with Trump to overturn Georgia’s election. A threat from the rest of the Justice Department leadership team to resign en masse forced Trump to back down.

> On Jan. 5, the U.S. attorney in Georgia resigned rather than collaborate in Trump’s attempts to overturn a state election result affirmed in three recounts.

Prosecutors have the tools to obtain that information.

They should consider these leads:

> Inside complicity? The Capitol invaders seemed to know exactly where to find Democratic leaders’ offices. In the days before, Republican congressional representatives and aides were apparently giving tours of the Capitol, rare because of COVID-19 restrictions. If the tours were requested to surveil, and the House members authorizing the tours knew, what communication — if any — did any of them have with the White House or with people in Trump’s orbit?

> Massive communications — apparently organizational — took place on right-wing websites prior to the rally. Donald Trump Jr., Stephen Miller and others close to the president cater to and follow similar, if not the same, fringe sites. What did they know about Jan. 6, and what did they communicate to the president?

> Trump confidants Steve Bannon, Roger Stone and Michael Flynn were involved in promoting the rally. Bannon predicted the day before that “all hell is going to break loose.” Trump campaign aides and fundraisers were involved in the rally’s organizing. The rally permit of Women First, a major organizer and funder, listed multiple Trump staffers as rally managers or VIPs. All were Trump or GOP veterans — not “grassroots” people; the Trump campaign had paid them $2.7 million over the previous two years. What did these people know? What did they communicate to others before the event?

> Trump told rallygoers he would march to the Capitol with them but instead returned to the White House. Why? Did he know or expect violence was likely to occur? Emails and text messages of his close associates and the organizers should be reviewed.