I wouldn't say plain (english) scones are savory. They're neutral like bread. A plain scone that you top with jam and cream isn't really savory. But you can just as easily use them the way Americans use biscuits because they aren't typically sweet either.

Damn you, now I want scones.

People getting to make posts accusing other users of being pedophiles and rapists as retaliation to being called out for shitty behavior isn't a game. This is what is happening. Bad behavior here has escalated this far and it's not getting better by waiting.

And since here's no hope of that stuff being removed from the site so I would like to be able to avoid having to see it.

If you see their name. Do you see the OP name in your comments sidebar on your user page?

I'd expect it to be opt in yes.

It's not spam. It's original content. If you start trying to hock your wares here we might reconsider. Also if you start spewing linkbait or content mill junk.

It was a generic public comment, not directed at you.

Why do I need to convince grendel of anything?

Containing a toxic spill isn't possible if people walk through it.

This is a social problem with a social solution. But we are attempting to rely on technology instead, and it's backfiring.

like you should have done a long time ago

We can filter? Wow why didn't anyone say so... oh, wait, they did. I did filter him. I've said so before. Repeatedly.

He's been filtered since the day I made a hubski account. But I still can't escape his shit.

He keeps showing up ANYWAY.

He keeps showing up when I look at people's user pages and look at their recent comments and end up on his threads; OP doesn't get listed in "crafty · link · parent · +! · post: What freedom of speech isn't"

He keeps showing up on community when people telling him off gets upvoted. OP also doesn't show up in "kleinbl00 · link · parent · +! · post: It's a White Man's Internet"

He keeps getting in my way because all y'all keep giving him the attention he's trolling for.

The latest one I didn't even have to click on the thread, I just went to the community page. The title was enough. And I also already knew what it was about because I saw the triggering conversation in my chatter.

Why should I have to not click on links on hubski because it might be a stealth blocked person? It's kinda defeating the point, yo.

I keep mentioning all this. I don't blame the hubski team for not keeping up, there are a lot of issues to deal with. I mentioned it all back a month ago and was told to just wait it out. I've mentioned it since. I mentioned it the other day. I get told it can't be fixed if I don't mention it. Sure when I do mention it I get thanked and that's nice. But I also get shit piled on me in the most amazingly condescending way, and told I'm fucking lazy, or told to be quiet and wait it out. Doge forbid I get angry about it. No wonder others are nervous about pointing stuff out. 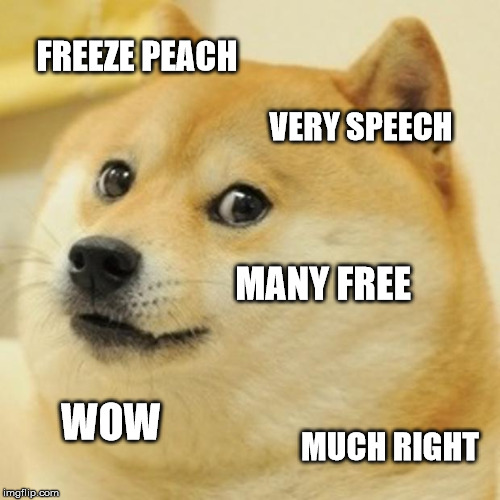 Get off my back.

I don't recommend the internet to friends

I can't recommend hubski as a chimpire-free alternative to reddit when it is heading for the exact same problem. It only takes one Cat Piss Man to ruin a place this small, and ours is malicious to boot. It's literally killing my experience of hubski, why would I invite others to experience the same?

And you. You're part of that experience. Congrats.

No you can fix it by backing off.

Yeah, it's not gone, or going. It's evolving.

Thinking that it's on the down and saying that one should stop bothering to deal with it because it's going to go away is a dangerous way to think. There lies normalization.

Women in India are Fighting Iodine Deficiency Through the Bindi
0
arguewithatree
time.com  ·  #culture  ·  #publichealth
Don't freak out, but scientists think octopuses 'might be aliens' after DNA study
thundara15
ooli
irishexaminer.com  ·  #biology  ·  #space
tla  ·  2518 days ago  ·  link  ·    ·  parent  ·  post: How and why did you become committed?

Note carefully this sentence -- It's a contract job. They have NO commitment to you.

Not to mention that companies in general expect unfaltering loyalty from staff, but rarely show any loyalty to staff, even permanent staff.

Is it September yet?

Ok, 1 cup of red lentils to about 4 cups of water should give you 3 or 4 meal sized servings.

I use powdered cumin/clove and fresh cilantro. I freehand it but go for at least a teaspoon of cumin and a pinches or two of ground clove. Or just use a garam masala mix. Honestly the spices are just a guide, I vary it all the time. Sometimes it has garlic and ginger too.

Go with as much onion as you want, I usually use a whole small one. Puree half with the tomato so it adds to the sauce but keep half of it in coarsely chopped or in strips and brown that in some oil, then add the spice powders, stir a minute and then throw in the water, bay leaf, cilantro and lentils.

And it's pretty good served with fresh chopped tomato on top too.

You can build upon this quite easily too. Your imagination is your limit.

And it's not because every man does this, or every white person does this.

But eventually you will find those who do, because they'll fucking gravitate towards you so they can.

Put the tone argument away. What he's posted is not unrealistic, and you don't get to dismiss it as that because of its tone.

look up what Shaka Zulu did

Of course non-white societies have disputes too. How is that proving anything here? All I'm hearing is "What about the black on black violence, huh?"

Angry women are clearly at that time of the month. Not to mention vain (shallow), defensive (closed minded), cliquey (insular), naggy (pedantic) and manipulative (self-centered).

Why would you do that...

I have no research or human behavior education to base this on. It's just me speculating out loud.

There are people here who act as evidence, so there's that.

I'm not surprised. But I can't sympathize.

20 minutes upwards, depending on what and whether I get distracted.

Some of our staples are: