Yeah, the trial was a disgusting spectacle, but

...Did we just witness one of the most obvious influence campaigns ever?

I'm not really on the largest platforms (f-book, twit, the 'tok, which btw seem more susceptible to influence campaigns, generally, probably the huge audience is both an incentive and a cloak), but there was reportedly a pretty big influence op. There must have been, because everyone (else) was talking about it at a get together, and everyone had sided overwhelmingly with Depp. But I did see the pro-Depp selection bias on reddit's front page, for sure. Shoulda checked Fox more.

I've no idea where I stand on the trial or verdict, which favors Depp, but I know that someone with that much wealth undoubtedly has access to influence ops on The Socials. If you could boost views on clips almost always unfavorable for Heard all the way to, say, the jury, for a few to ten-ish million bucks? Hmm.

"Look kid, I'm in the hundo-mill club. After my optics pump n' dump, I turn around and buy the company stock as a sign of appreciation for the services they provide. Namely, laundering my reputation in the court of public opinion. The JURY, kid! The jury. Think, will ya?!"

We can debate whether the MeToo movement went too far, but that debate is forsure not what's happening most places out there. Actual witch hunt energy, a lot of places. Poop jokes, a lot of mocking Heard's in-court demeanor, celebrating Depp's, cheering the verdict, etc., it's... not great. Misogyny-adjacent, if not clearly within the circle, some places.

Even if I'm wrong about this specific case, the ultra-rich undoubtedly understand the possibilities. Remember Cambridge Analytica? Feels like ancient history. What, did they just.. go away? Its next business form was liquidated eventually, so all those aspiring dark-moneygrubbers found a new gig?? LOL nah don't think so. Is buying a social media influence op during a trial you initiated even actually illegal?

We are not handling these technologies well, at the moment. I hope it doesn't destroy us before we figure things out.

P.S. do you think Musk bought some of the bot followers he has, so he's pretty comfortable alleging that Twitter has a lot of bots, all in an effort to help him back out of the proposed deal? Classic.

A massive waste of time and resources used to distract people from the pressing issues of the day while having no significant impact on anyone's lived experience other than the gawping.

We're on the same team.

I hope my post helps people understand how celebrity and wealth can potentially create a novel and evolving sort of lawlessness in the judicial system thanks to modern technologies we haven't had effective legislation for yet.

Actually one of the only things that most everyone agrees on in my geographically local social circles is that mainstream social media platforms are destroying us. There are minor disagreements on the details. Will the market correct? Probably not, and at least partially because Boomers (see elsewhere in this tread). Boomers (not all!) who warned us not to believe shit on the internet and then believed basically everything they ever encountered on the interent.

You need to read this book.

Celebrity and gossip fill a useful role in societies modern and ancient. Denying both is naive; understanding their useful and toxic effects will give you a greater insight into humanity and allow you to bitch about things that are actually wrong rather than things that offend your fundie heart.

I'm not talking about norming social gossip that serves a purpose.

This is the 'circuses' part of 'bread and circuses.'

I have seen far more people get upset about what the Depp verdict means for the future of humanity than people who actually gave a shit about the trial.

The give-a-shit factor on Johnny Depp is really low. What coverage we saw was undoubtedly PR-driven; it still wasn't enough to get most people to give a shit. Considering nobody followed it, it's pretty disingenuous to give a shit now just because it's been spun through your personal give-a-shit filter.

You know what I keep seeing? 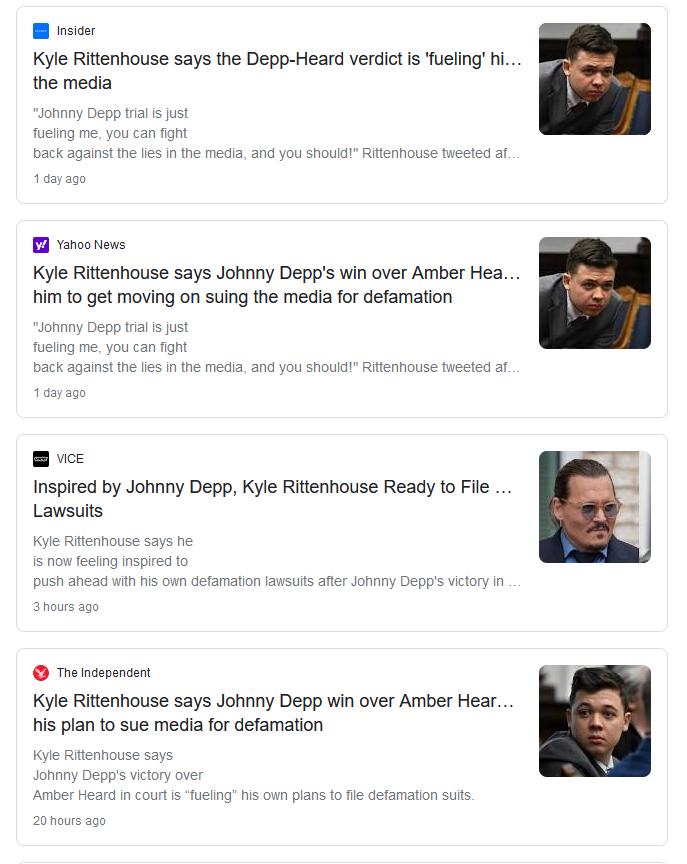 NOW we give a shit.

Let the record show that some members of our respective social circles are very, very divergent.

Confession; My give-a-shit factor on all of it was almost exactly zero until I lost a round of Jackbox to peers' Amber Heard-targeted jokes, then give-a-shit levels were 0.01-ish (NOTE: reality ends after these parentheses), then it was "ruin hubski with it", and the real injustice is that people didn't understand the brilliance of my non-Depp-Heard humor that night.

Exercise for the student:..

It not you, it's me, but I don't know where you're going with this. I wanna say it's harder to influence a mass media v. cause-celeb, b/c mass media financing has entered the chat, but there was plenty of mass media shit going down on both sides, especially for Rittenhouse.

I'd bet the PR funding was more disparate for Depp-Heard PR.

We're at the "how obviously is social media affecting the judicial branch" phase, now, I think.

I think we're witnessing a mild effect in an inconsequential forum.

Again, some transparency would be nice.

I have a web crawler that, with some effort/time (which I don't really have), I could point at Twitter and ping topics or accounts of interest, the trending shit, whatever, and I could probably glean quite a bit, but it'd be nothing compared to what Twitter-internal analytics would reveal.

You pretty much summed up my opinions exactly.

Weird PR war between two people I couldn't care less about, turned into a weird "men's rights" thing. I know real people actually throwing a party to celebrate and it's just so confusing.

Is it bots? Maybe? Probably?

I legitimately try to believe that anything outrageously dumb I read online is a paid troll. Might not be true but it does make me feel better.

PR warfare, totally, and I think Depp showed up with a PR military to a PR barfight.

I also think it's increasingly unacceptable to have exactly zero transparency on major platforms' algorithms and traffic data. I'm not asking for the code or something, but we already know Big Soc understands better than anyone how terrible it is for society and has been covering up the extent of it (for the uninitiated.

The GOP often gives lip service to the idea of anti-trust laws or repealing Section 230, but I'm very much in favor of actual change. Meanwhile, Pelosi calls Schumer from her rotary dial phone to recount the good old days, when .com bubbles simply resolved themselves, somehow.

Bots, trolling, all of it, we have no idea. We're not allowed to know much of the mechanics and statistics behind our perceptions of society. Like... evaluating major bases of the collective worldview was already a hella confusing thing to navigate before the internet, and now the path to doing it's being intentionally obfuscated. For profit.

Truly, this is some foundational shit. The information ecosystem is being polluted, and often systematically. It affects our ideological cornerstones. Cannot overstress how much we need a re-thinking of our online spaces, or even re-exploring what we intend to accomplish with the internet. Beta testing the latest release is... uh oh.

Related: Why Are We Still Governed by Baby Boomers and the Remarkably Old?

The same signal in Britain, basically. You'll be able to extrapolate the rest to America just with the first 10-20 minutes or so.

Bots, trolling, all of it, we have no idea.

That's not actually true. Thomas Rid spent a good quarter of Active Measures on Wikileaks, Cozy Bear, Guccifer2.0, Cambridge Analytica and the 2016 election and its aftermath. An overview:

- Targeting was less effective than made out in the press

- Facebook was utterly flat-footed, are less so now and boy howdy any further shenanigans are not gonna go their way

it also annoys liberals to bring this up, but the give-a-shit factor can't be ignored. More people voted Trump out of office than any election in history. Cambridge Analytica outraged everyone and did damage to Facebook far beyond damage done by Facebook. by all means, be vigilant. By all means, shout at Silicon Valley. By all means, poke and prod and post Gettr logs. But also recognize that getting mad about things that aren't as bad as they look is the best way to keep them from becoming as bad as they look.

Web3IsGoingGreat is a shitshow. It's a dude who hates crypto, who has made a career out of hating crypto. Social media on the blockchain is beyond nascent; right now, a system designed for exchange of value is primarily focused on exchange of value. go figure. Expecting it to replace Facebook right now is ridiculous.