- Half a cup of corn starch

- A cup of warm water

Mix yeast and sugar with water, leave it until you'll see it froth. Add it to other ingredients, but add flour incrementally. Knead it until it's springy, if it sticks to your fingers it means you need a tad more flour.

Here's how it looked initially. Cover it with a bit of olive oil to prevent excessive drying.

Here's how it looked after an hour. Now it's ready to be put in the fridge for about 12 hours. 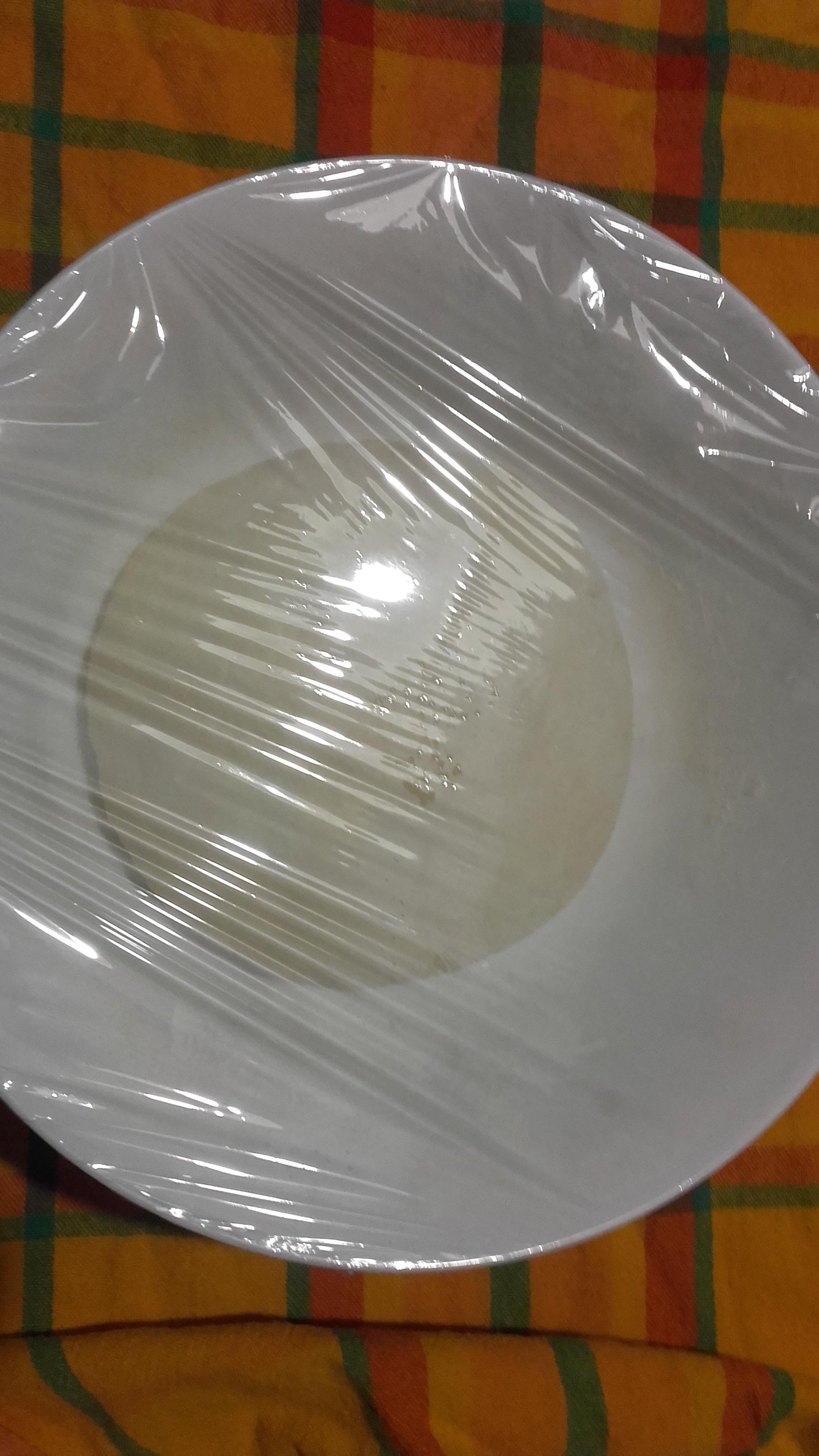 Here's how it looked afterwards: 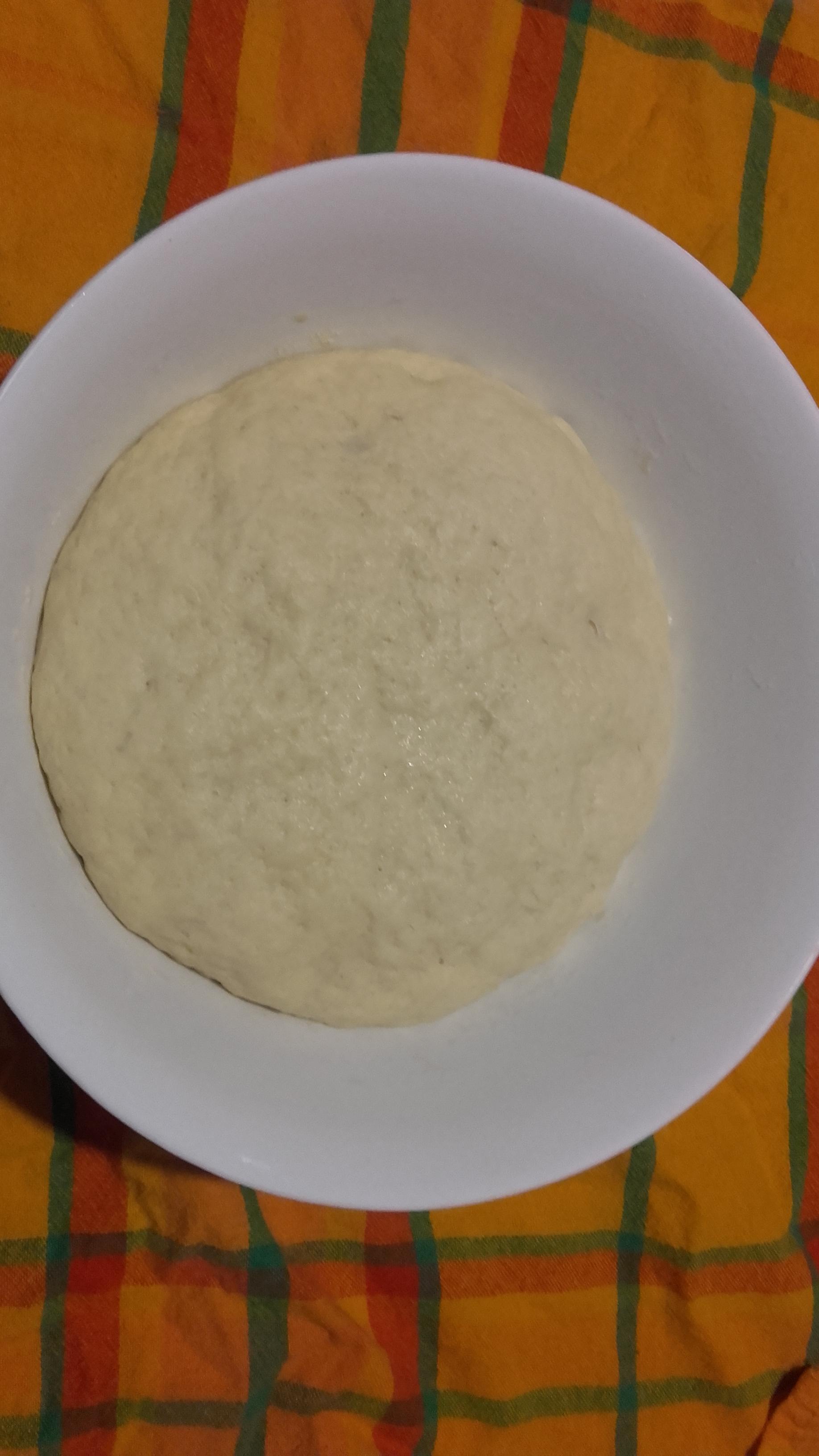 - A pound of ground beef

- Half a pound of mozzarella (grated)

- Half a pound of some other cheese (also grated). I used Tylżycki, which is a rather mild and soft type of Polish cheese. Substitute with whatever you like.

- Half a cup of water

- Tablespoon of teriyaki sauce (perhaps the most optional ingredient, I just love it on everything)

- Oregano, basil, garlic cloves and pepper - to your taste and preference.

Chop onions into thin slices, drop them on hot oil and keep on low heat for a couple of minutes. Dissolve beef stock in water and add it to onions after they'll get soft and clear. Simmer, add beef, sauces and spices. Sprinkle about half of each cheese into the mix and keep it on low-medium heat until the meat is cooked. 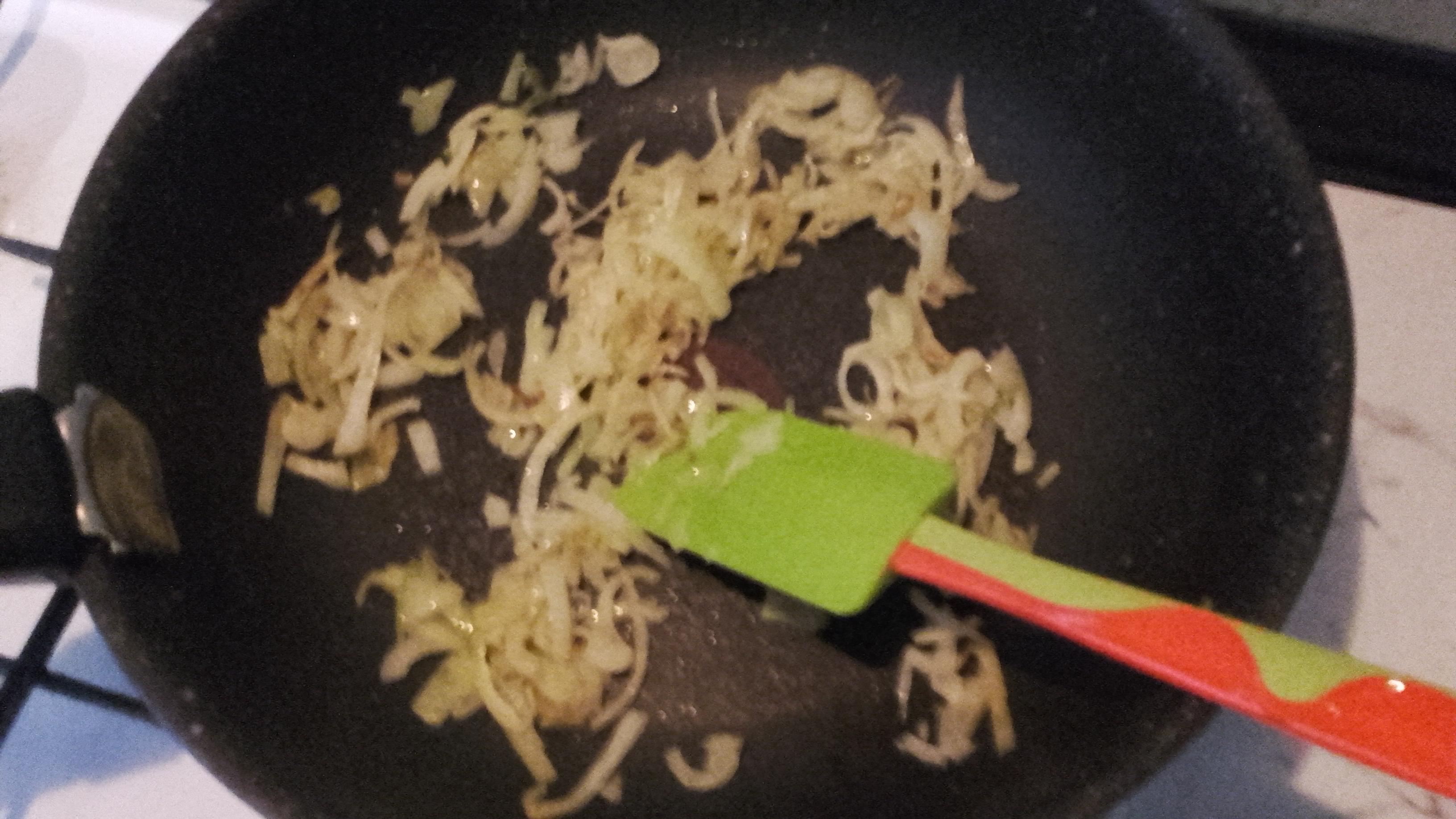 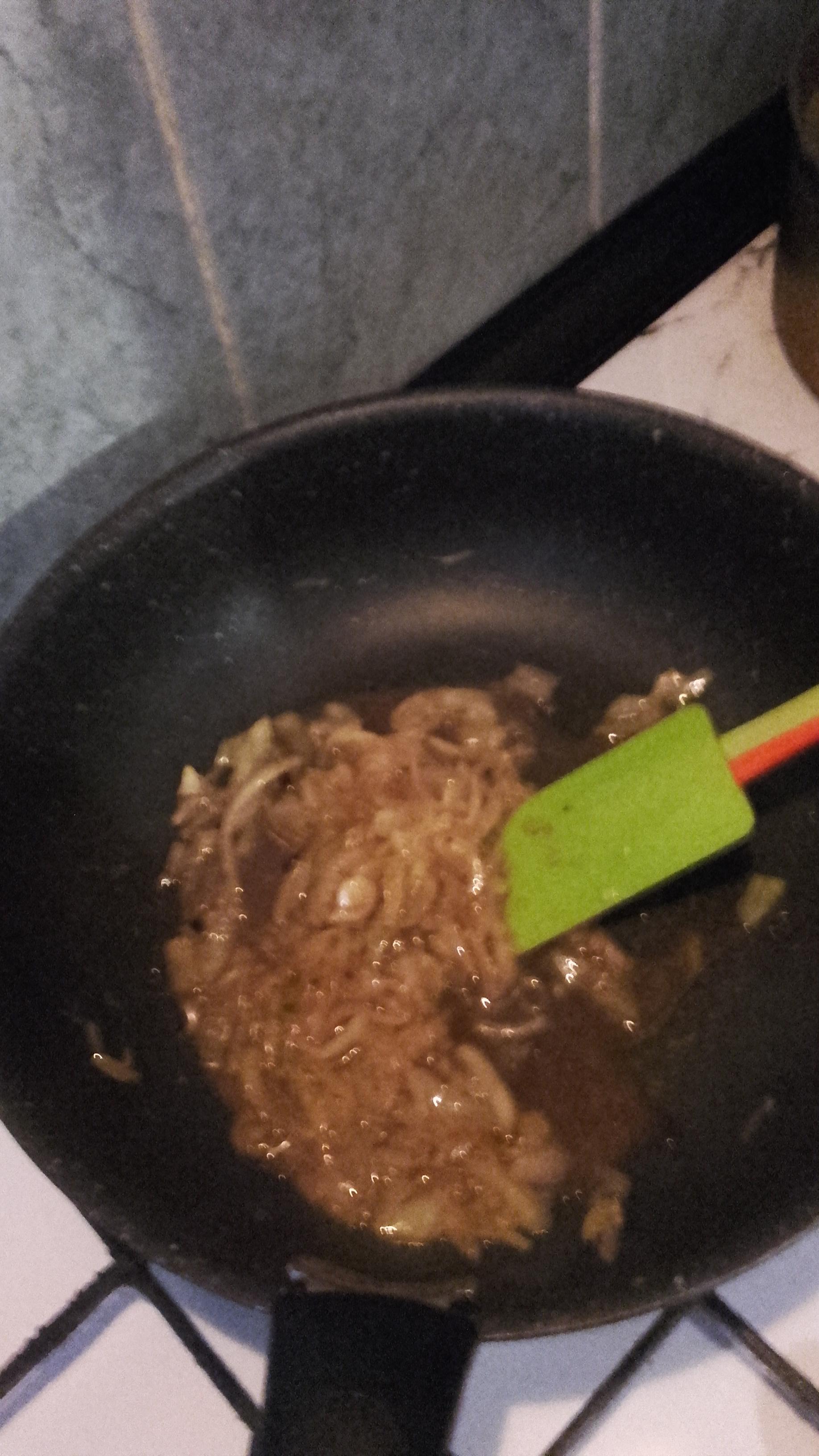 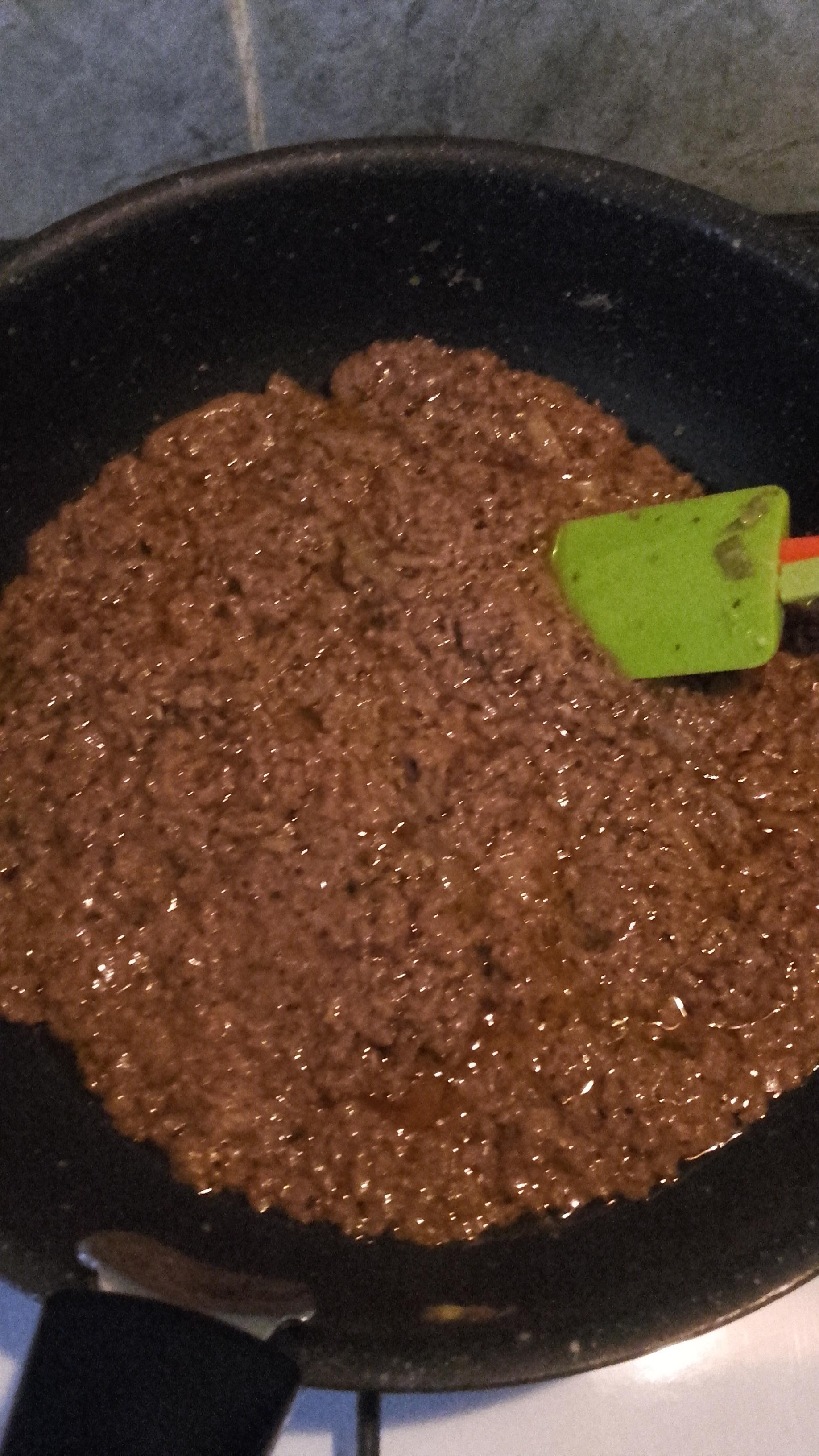 Let it sit and cool a bit while we're dealing with the dough. If there's too much grease afterwards, dispose of it for later. You can use it to cover the thing

Form it into a rectangle. 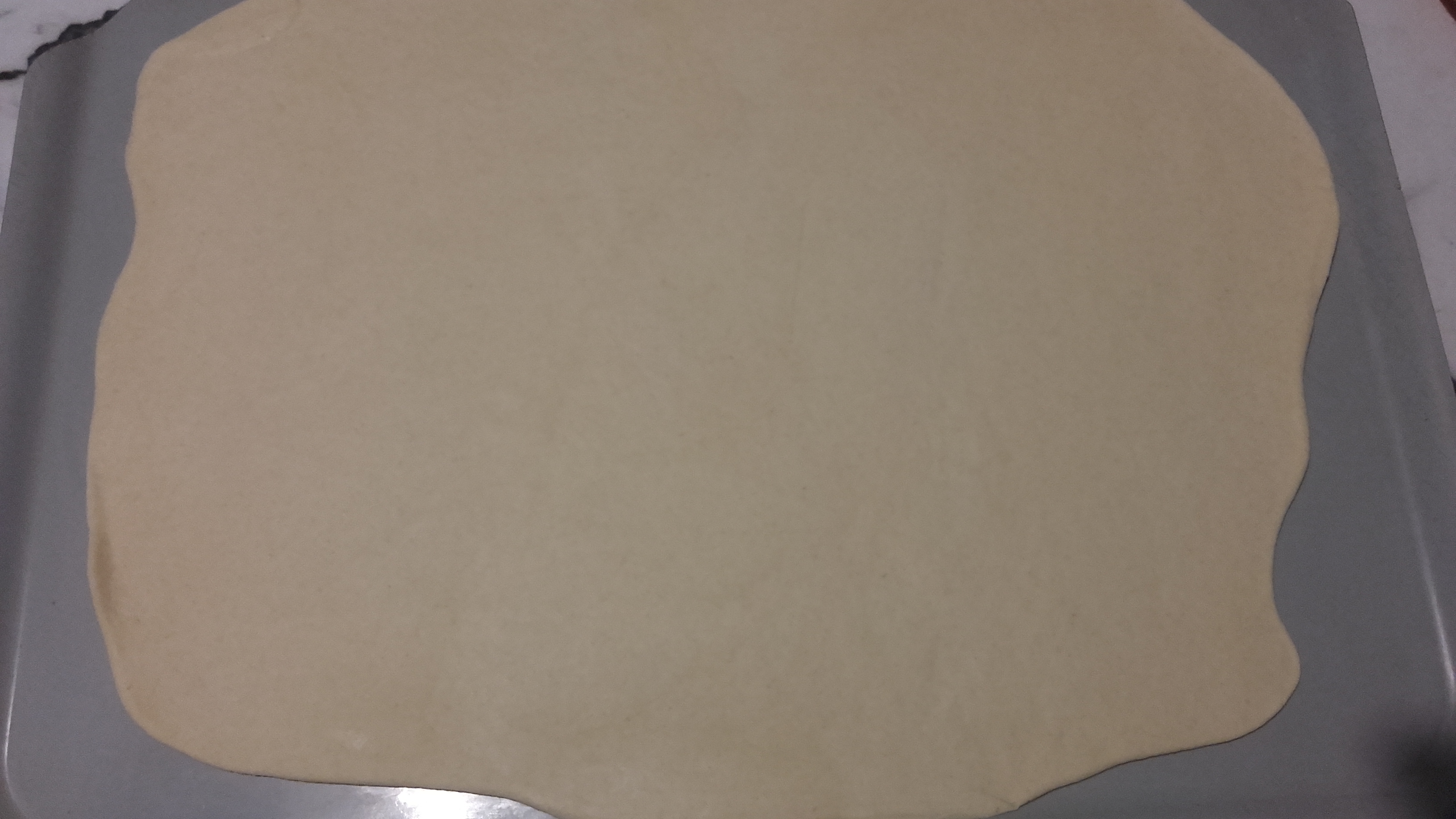 Put on a layer of cheese and olives. Leave enough room at the edges, because we're gonna close it over the filling. 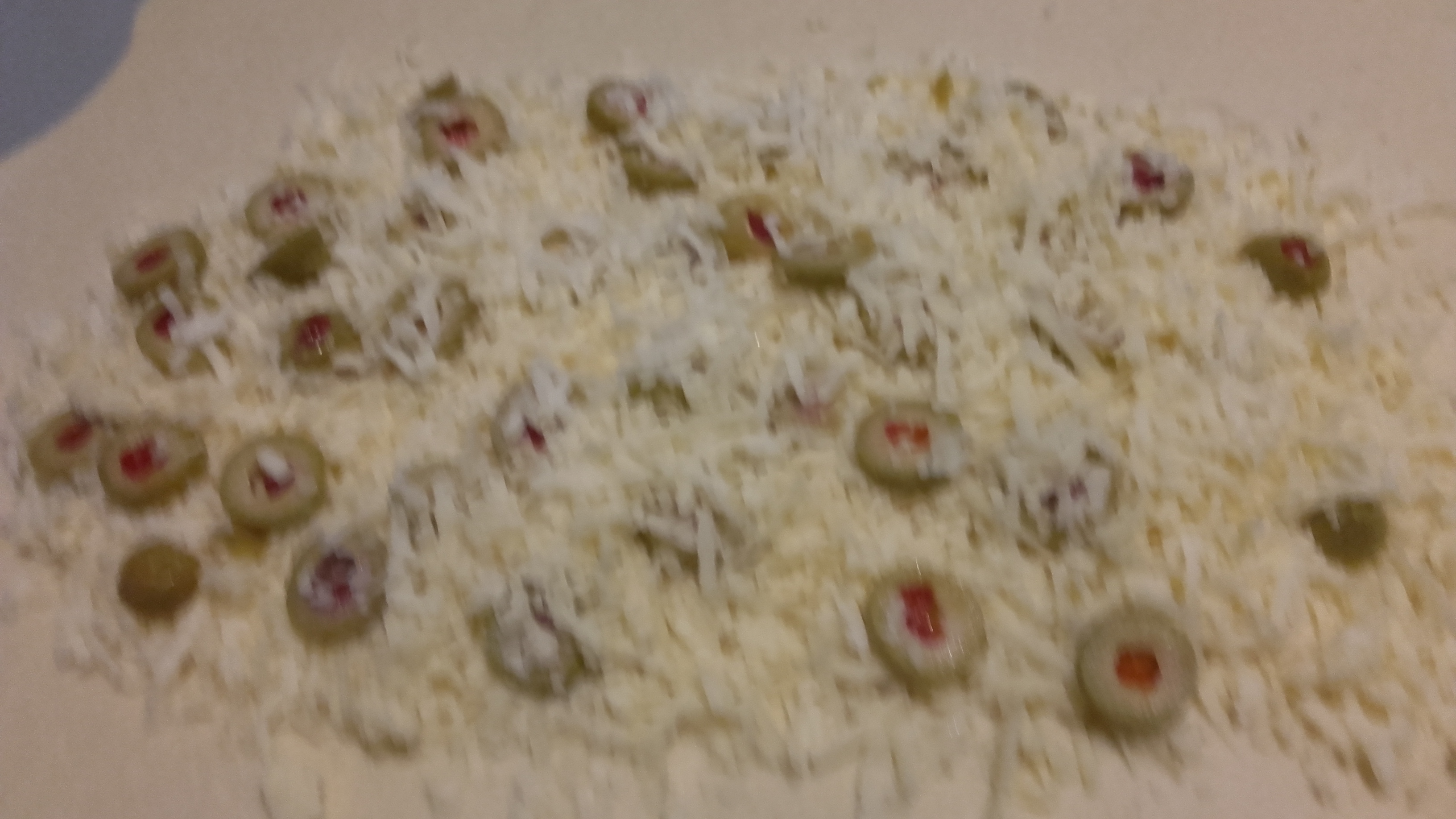 (Good god, this thing supposedly stabilises picture. Do I have Parkinson's or something?!)

Layer meat filling and remaining cheese, make sure there's a bit to cover it at the top. 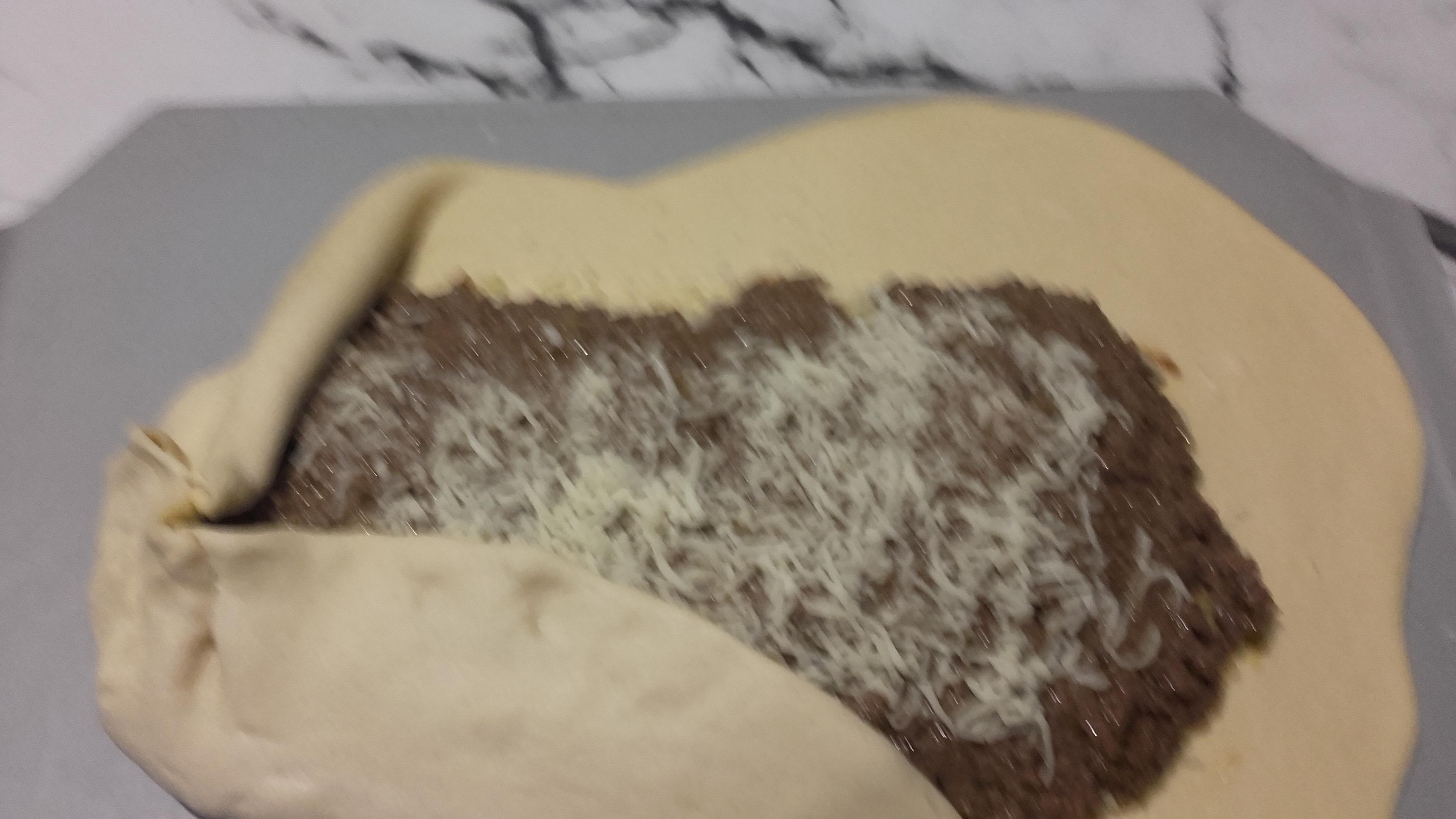 Put the 'loaf' into a pre-heated oven at around 175 C and leave it there until it's brown. Mine burnt slightly because of reasons.

Here's how it looked fresh out of the oven. 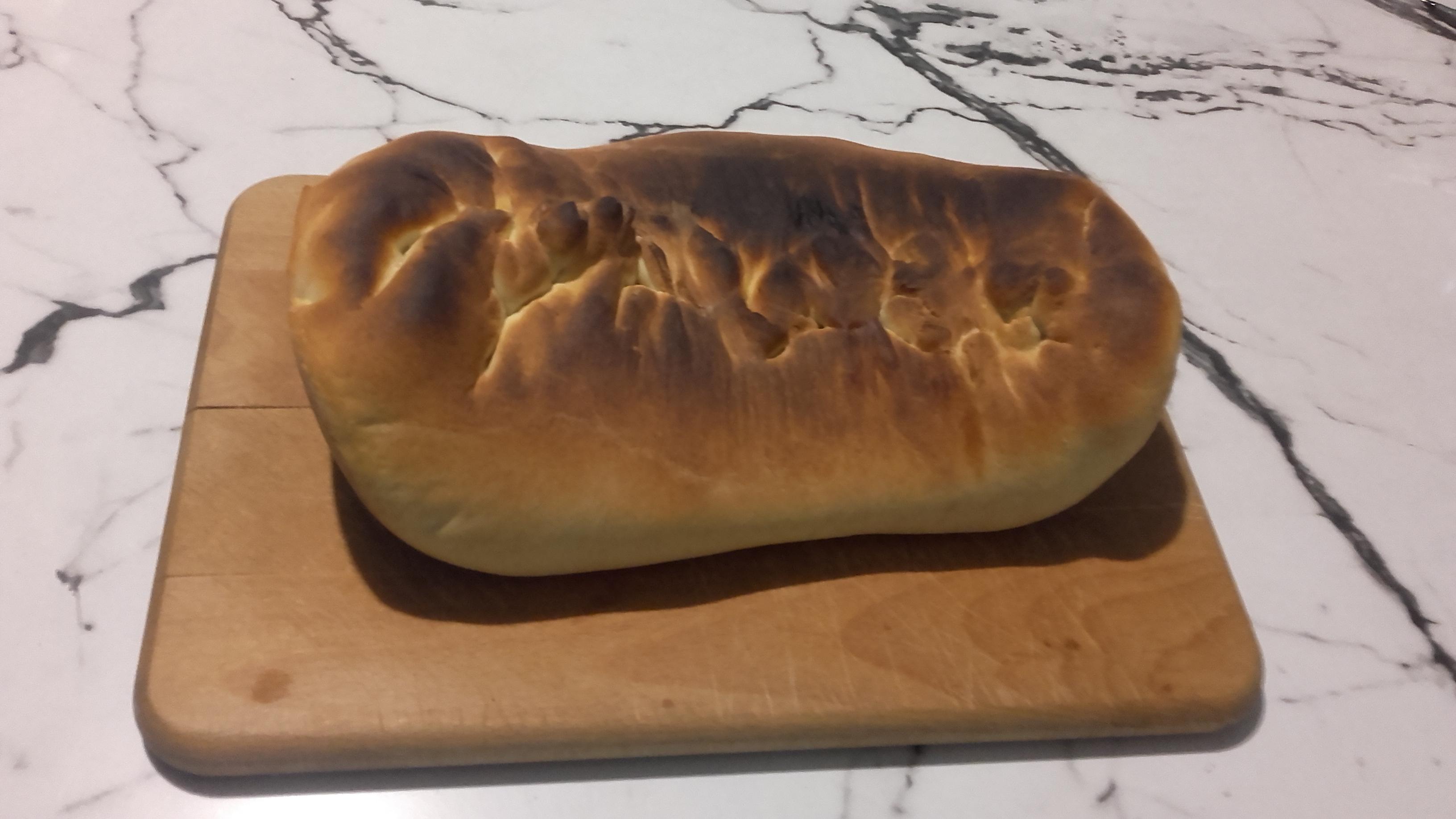 Wait about an hour before making your first incision, otherwise, you'll see all the cheesy guts spilling out everywhere. 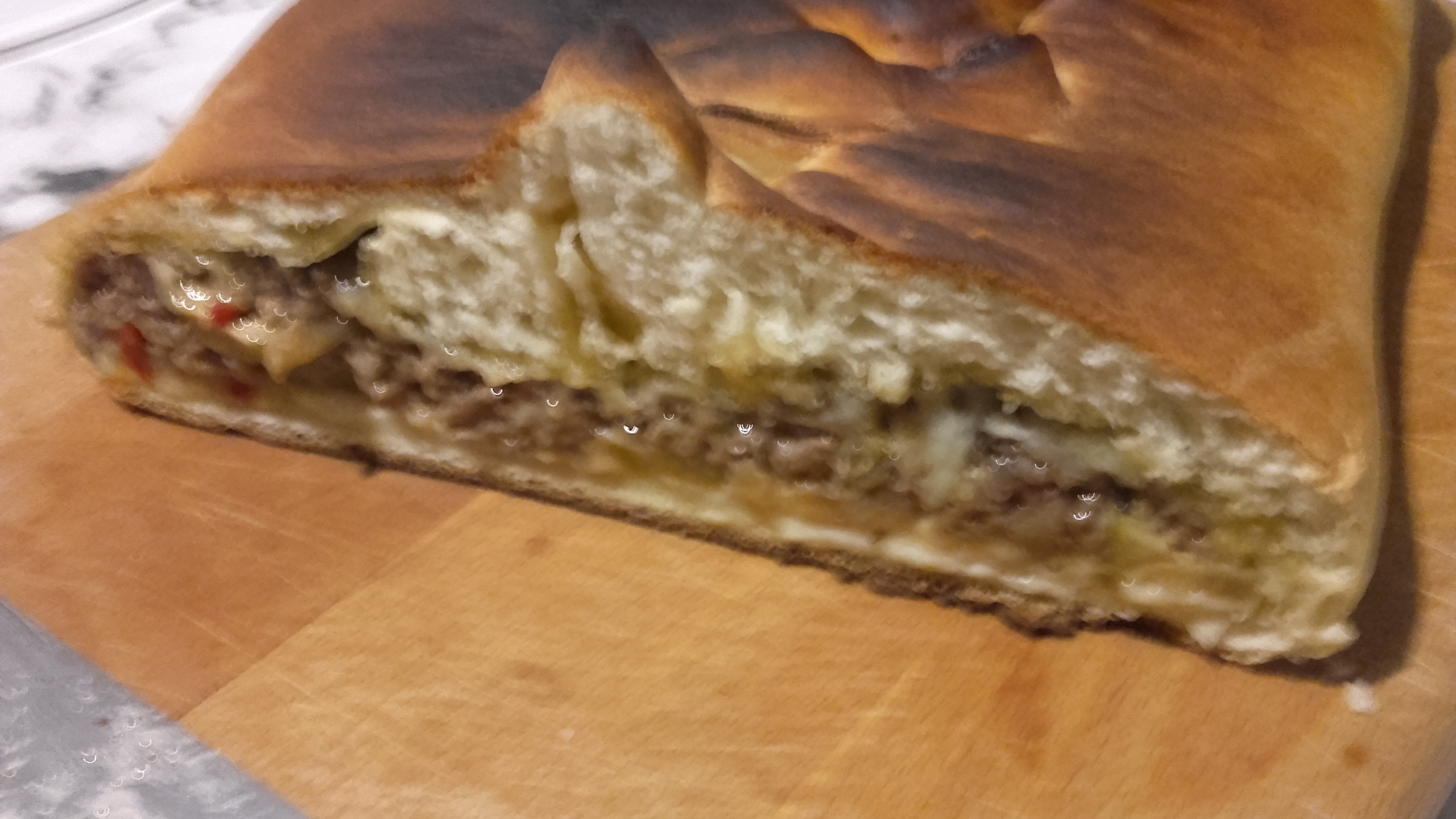 I think my wife would rather be quarantined with you, and she's just not admitting it at the moment.

She asked me if it has a name. I told her it's the "Devac", so she's off googling that (hahahhaha).

You know what they say, stomach is just inches away from vena cava. :P

She asked me if it has a name

That's perfect. I'm a meathead. No, now I'm a meatbreadhead.

10/10 instructions and pics. Thawing out my ground turkey for tomorrow instead of next week, lol.

Weird af question: you just bunched the dough up top to close it, right?

you just bunched the dough up top to close it, right?

Yes, just pinch it alongside the seam. Kinda like with pierogi.

OMG I just ate dinner and I want meatbread.

Fuckin' not gonna lie meat-stuffed bread from literally ANYWHERE east of the Rhine is my favorite food in the entire goddamn world.

Given some research, I think I could make a gluten-free version. Maybe even vegan-compatible if I'll get creative with bean-based filling. Those are too good to miss out on. Thanks for the badge by the way.

Oh I'm sure the wifey could, too. She's just not orgazballs about meatbread.

Thing about gluten-free anything is it's not so much baking as... spackling. It's a much less enjoyable pursuit. Like your absolute-best gluten-free fresh pasta is pretty much mediocre fresh pasta and you celebrate the triumph. Gluten-free bread you pretty much go "whoa! It's pretty close to bread-like!" and are amazed.

Do you think this will turn out well without the corn starch? It's the only thing I don't have in my pantry.

Yes, absolutely. Corn starch is there to add a bit of taste that I like and not much more.

it looks fantastic - i think you've inspired me to try it myself tomorrow, or something similar :3 will report back in ~20 hours