universities do this shit all the time - every building / landmark on michigan state's campus is named after a donor essentially, especially the sports related ones - i think every room / gate in the football stadium is named after a former athlete or a rich honky

if the most effective way to get rich assholes to spit out money is by treating them like they're important, so be it

the linguistic situation in singapore can be compared to jamaica or other postcreole areas, cept this time the languages at hand are english, certain varieties of chinese (generally from southeastern china), and malay

one of the most fun things about it is the sentence-final particles used for changing the tone/assertiveness/emotional feel of the sentence, which is a common thing in east asia (chinese and japanese being big examples). she uses lah and lor several times in this video, and i think there were a few others i didn't catch

if you're interested, check out this for a quick overview (ctrl-f "The ubiquitous word lah" to get to where the discourse particles are addressed directly) 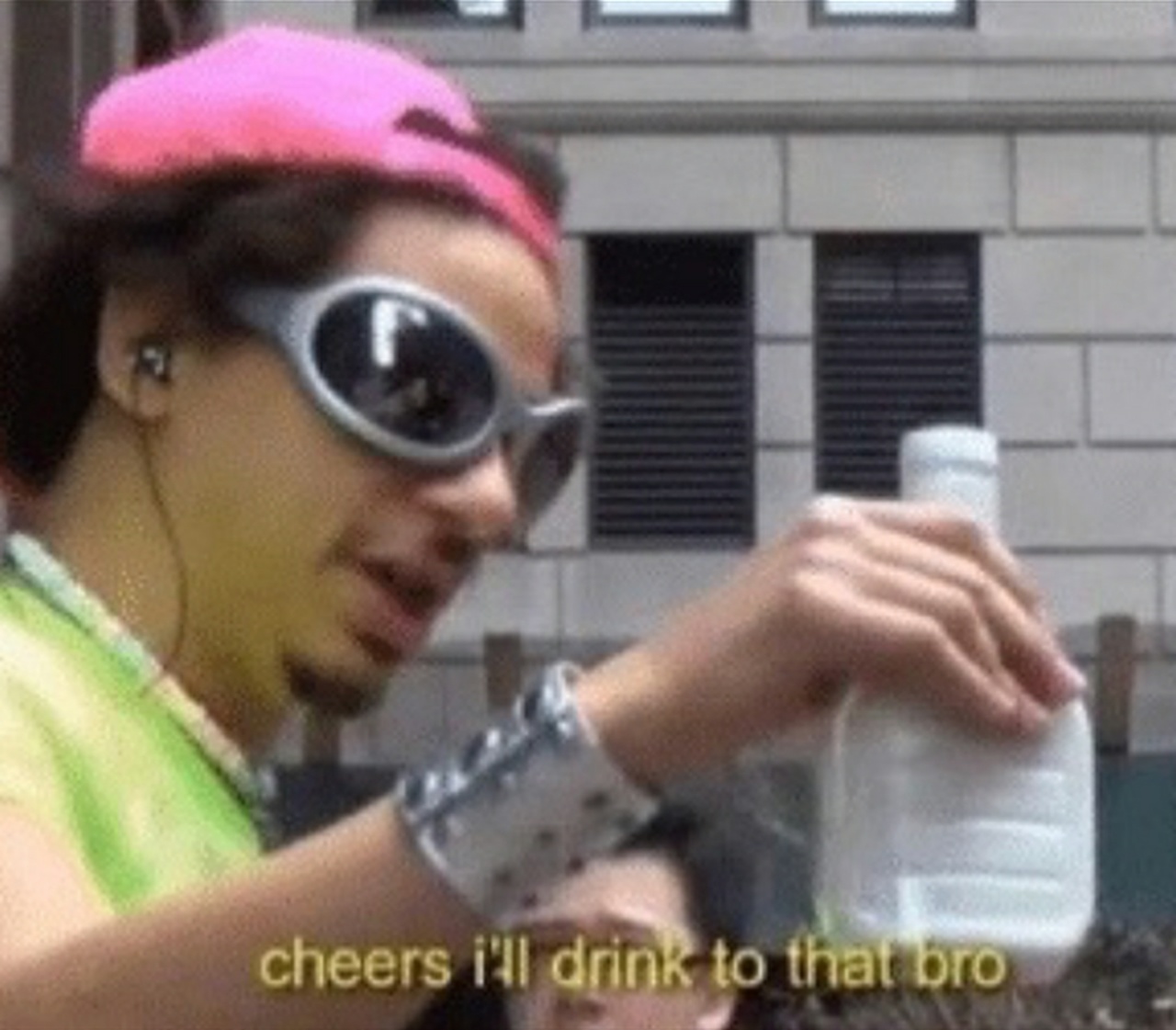 i have an apartment picked out to move into this august with my boyfriend - a friend of mine lives there now and needed roommates so if all goes according to plan i'll be living a very happy domestic life with the mans soon, i'm really excited :)

academics remain fine so far, i've been finding my japanese courses especially fun this semester - the pop culture class is interesting (we talked about postmodernist theory a bit last time [distant kermit the frog screaming]) and the professor of the language class reminds me of my nana if she were an academic

anyway, best wishes to everybody and hopefully the wind stops soon

sometimes you're riding tall, queen of your domain, on the lookout for anybody gonna take it from you

other times you're grazing, just vibing, waiting for your troubles to get off your back

i dunno that metaphor makes sense to me

i made up a joke plz review

here's a quick attempt at translating (with likely misinterpretations)

even this dirty street is hidden by snow

the piled-up snow on the highway

hit by a car, burned by gas

darkly dirtying and mixing with oil

this scene doesn't reflect that stuff

i'm behind the times, i guess

this city hasn't laughed in who knows how long

this scene doesn't reflect that stuff

and hosts a somewhat entertaining podcast too - take that, bootyjudge

there's been a surprise resurgence in hobbies lately - among other things, making a map for the alternate world i like to write about

there's a world 'isekai' in japanese that i like - it basically means "parallel universe" or "alternative world" but it's less clunky than either of those expressions are in english, and doesn't have the judgementalness of 'fantasy world'

anyway have a good week everybody

hey I'm not trying to be a dick about it, it's that i want to clarify some things that i actually have knowledge about / want to contribute to discussion on here for once instead of floating around complaining about my life like i normally do - I'm sorry for breathing down your neck, i didn't intend it

at the same time if i was saying smth inaccurate about sound design or moviemaking or watches or etc the things you know a lot about, i would want to be corrected / for people who know more to come in and share because I'm an ignorant person generally so it's like, i thought i could share some stuff that i thought was interesting

so i apologize for using your comments to jump off on rambling / making you need to 'keep up with' a discussion that doesn't interest you: next time I'll just comment on the main body of the post to avoid this kind of thing i guess

what is the sound of one (1) unit of dark being pushed back?

compounds are ambiguous in what semantic relationships are assigned to them - a butcher knife is a knife for butchers, a plastic bag is a bag made of plastic

each option is horrifying in its own unique way

i disagree with the assertion that it never had much going on, given that it was rome's breadbasket and rich as hell for quite a while after the time you discussed - i think if you're gonna point to the romans fucking up the coast you should point to deforestation and not to the whole "salting the earth" thing - sure, they fucked up the city for a while, but it rebounded into a bigass metropolis and only really lost relevance after getting bounced back and forth between rebels, vandals, eastern romans, and arabs for like 400 years

libya wasn't just cyrene: there was a lot of shit in roman africa and i think it's not correct to characterize north africa-west-of-egypt as "the greeks' sloppy seconds" and punic ruins. a bunch of important stuff happened in between "rome moves in" and "everything is islam" and if things turned out a bit differently it sure as hell could have "had a chance", or at least could have declined a lot slower

also north africa was like. extremely important in the spread of christianity and popped out more bishops and heresies than anybody knew what to do with so it's like even culturally speaking it's not like it was a backwater given that saint mutherfuckin augustine was the bishop of HIPPO

i dunno man. i don't disagree with the first half of your post (old historians are lying bastards at the best of times and it's a dangerous game living in the desert), but i deeply disagree with your conclusion and i think it's an unhelpful oversimplification

silphium is neat as hell, i agree with that - i would watch the hell out of that movie too

a tsa guy groped me when i was going through security, in that he snapped at me for doing something wrong (i took my shoes off when i didn't need to, or something similarly grave (which i had learned to do when i exited LAX initially when i flew in), and then grabbed at my breasts while giving me a patdown

my initial version of this comment had more "kinda"s and "?"s in it because i have difficulty asserting that experience apparently but it made me deeply uncomfortable and was the first time i ever felt threatened in the way that women feel threatened, not including catcalling from cars. i just remember walking away feeling really angry and greasy

it's a language study jargon thing (although i've heard it in philosophy abt morals?): prescriptivists are the ones that prescribe rules for language ("never split infinitives!") and descriptivists are the ones that describe the way people actually speak ("in english, adverbs are often placed between verbs and the infinitive particle to"). i'm bringing it into the wider world because i think it captures the distinction between Humanities the institution and humanities the study of society/culture - the Humanities try to tell you what's good or bad and the humanities tell you the things that are out there and what purpose they have

i'll define my keyterms a bit better next time

prescriptivists should exist, but they shouldn't be enshrined or taught in anything other than persuasive writing classes and they definitely shouldn't be put on the same level as like... things that are actually useful

but really we agree here, just we have different styles of rambling

if you can get away with it (either by not being identified or by getting off with something minor), you should - if you can't, it's not worth it

punch for the people that can't

son of bigwig in a law firm ✓

david brooks gave him a compliment once ✓

i dunno. bring on the death of the liberal arts mindset!

I didn't punch a Nazi, and I'm not sure how I feel about that.
Cumol31
goobster
text  ·  #fucknazis  ·  #thehumancondition
Quatrarius  ·  13 days ago  ·  link  ·    ·  parent  ·  post: The Academic Apocalypse: The crisis of English departments is also a crisis of faith.

i think if discussions of media / disciplines based around it took a more descriptive and less prescriptive approach the whole council of elders thing would be improved. i believe that stories, symbols, and beliefs are enormously important to humans and there should be fields dedicated to analyzing them, but the generic oldass white dude book should be analyzed as a historical document and should not be forced onto bored high schoolers or libart freaks any more than they should be forced to read an 18th century shipping manifest - sure human experiences can be universal but a hell of a lot of things that are held up as high culture are impenetrable and don't connect, especially when they're taught and held up as something Very Important (aka, drink your milk and take your vitamins in book form)

linguistics figured out the pres-des thing, i wish it would spread into the social from the social science

also as for egypt, essentially the people that were having a grand ol time hanging out in the quite habitable sahara fishing, hunting, doing a lil early agriculture in what was apparently a pretty cool savanna (you can find cave art of animals like giraffes in libya and other places at times you definitely wouldn't have been able to transport one across a friggin desert) - they all had to drastically change how they were living: population went for a shit, people either turned to a more nomadic existence (like out west), to oasis-type groundwatery places, or to the nile

nile turned out to be a pretty good deal

unfortunately i only managed to find one thing (tangentially related) that i favorited at the time - this is more about "how, if at all, we can associate ancient descriptions of groups of peoples with modern ethnic groups", but i think you would probably find that interesting too, and it has a LOT of keyterms in it that would help the search for more information. for once in my life it seems like i didn't save enough links, instead of far too many

basically to sum up what i can remember, the steady march towards desertification was due to a combination of the following:

groundwater being used up by said practices - when it ran out, the garamantes went bye-bye for example among other groups

actually i lied in the process of writing this post i found this, which again isn't as related as i would like but it goes over similar territory

also when a shitton of pastoralists moved in during the arab expansion plantlife got fucked over by grazing animals, as well as old infrastructure getting rekt

as for proto-AA, i think the more accepted linguistic theory is an urheimat around ethiopia? but frankly it's modeled to be spoken a long-ass time ago and it's not as well studied as proto-indo-european, which still has really big theoretical disputes (in who spoke it, where it was spoken, and what exactly it looked like). i don't know how much you know about historical linguistics but feel free to ask if you wanna get a crash course

"the green sahara" might be a long-ago thing in a geological timespan (i wouldn't know), but a significantly green-er sahara was pretty recent - enough that it comes up in some theories/reconstructions of where proto-afroasiatic speakers lived and the history of predynastic egypt, which is where i started learning about it - environmental changes in north africa is a really interesting topic and if you're interested in how one of the richest areas of the roman empire turned into a big dusty boy i would recommend it because it goes down some neat rabbitholes