a thoughtful web.
commentspostsbadges
Good ideas and conversation. No ads, no tracking.   Login or Take a Tour!
comment by kleinbl00
kleinbl00  ·  421 days ago  ·  link  ·    ·  parent  ·  post: This model forecast the US's current unrest a decade ago. It now says 'civil war'

Unfortunately, the two previous times that this has happened in the history of the US, it has ended in war, first the Civil and next WWI and II.

What is "war?" Ask that at a cocktail party full of intelligentsia and they will smile slyly and say "a continuation of politics by other means" because you can't open the New Yorker without that one fuckin' Clausewitz quote being in there somewhere but they're intelligentsia mostly trying to impress each other so none of them will say

a violent dispute over territory.

I think a foreign war is more likely than a civil war, because many of the factors that preceded WWI seem to also be present here.

Between 1918 and 2018 the acceptable American casualty ratio went from 1:1 to 100:1. With the abandonment of Afghanistan, America isn't fighting a war somewhere for the first time since 2001.

besides the obvious domestic parallels to the Gilded Age, you have Great Powers vying for international influence in far flung places around the globe, and you have the strife in the Mid East that looks very Balkan.

You have a failed trade initiative by the Chinese and the Russians eagerly selling BUK400 missiles to anyone who wants to piss off the US. That's it. Conflict in the mid-east is related to resources while strife in the Balkans was related to the end of Soviet containment of ethnic strife.

Today, I think that China resembles 1910s Germany in many ways.

China today resembles China under the founding of the Ming Dynasty. An era of cosmopolitan innovation ends with the Han Chinese insisting that the only Chinese are Han Chinese, oppressing everyone else, installing a rigid monarchy and closing their minds for 300 years.

Germany in 1910 was a collection of warmongering tribes encircled by treaties and non-aggression pacts dating to the founding of the Hapsburg Empire. China in 2021 is a totalitarian culture whose core values of ethnic superiority, cultural isolationism and resistance to innovation have been reinforced since Moses. Germany has been a free-trade zone and contested battleground since before the Greeks; China has been a big fish in a small pond that "wins" its wars by paying tribute to whatever barbarians are raiding in the moment.

China, having suffered a couple hundred years of international humiliation, probably feels about the same.

The only wars China has ever won are civil ones. "International humiliation" is what the Chinese cry whenever they aren't allowed to exterminate Uyghurs with impunity. You know what started the Opium War? The Chinese refusing to have an ambassador prostrate himself in front of a painting of the King while requiring the British ambassador to prostrate himself in front of the Emperor. Well, and then they violated every trade agreement with impunity despite being aware of Western military and technological superiority for three hundred years.

They have used their money influence to rebalance in Asia and Africa to a certain extent, but as long as the US leads the international monetary system, they're always going to play second fiddle.

Hang on there, homey. They've used OUR money. The whole of the Chinese "economic miracle" is globalism pouring investment into a third world economy where people work for pennies on the dollar. Know why things are getting dicey now? they aren't anymore. As soon as the delta between "dishwashers made in Shreveport" and "dishwashers made in Shenzen" doesn't pencil out, Shenzen is a swamp again. There's nothing inherent about China's "economic miracle" it's entirely the result of the Fortune 500 watching Tank Man and shrugging. That shit will close up overnight.

We did this once before, and recently, with another "ancient empire" that goes by Iran these days.

As we've all learned from the recent headlines, China is perhaps facing some sort of economic reckoning for the first time in a long time.

Great Powers have never had a direct hot conflict in the Nuclear Age, and with good reason.

Yeah but India and Pakistan have come to blows like four times since they both had nukes. The Soviets shot down two American airliners since we had nukes. I grew up spooked to fuck from nukes but it's all been pretty chillax since the Cuban Missile Crisis if we're being honest.

I think where Democrats really fail right now is in thinking that we can legislate our way out of this hole. We can't.

Don't hate the playa, hate the game. The Democrats are doing exactly what the Republicans did - legislation without politics. That's the whole game - "how much can we do without your participation" and that's why the Democrats are busy tearing each other apart. Everyone has acknowledged that the Republicans are busy trying to keep their seats at the tea party and any acknowledgement of the actual governance of the country means you're a traitor.

The GOP should be in free fall.

Lots to unpack here. I'll start by saying I'm fully aware of the Great Leap Forward, and what I meant by a "long time" is the living memory of the majority of Chinese people. I'm 39, which puts me right about the median age in China, and I have no memory of China's economy doing anything but expanding. We just don't know how the people will react if they're left holding the bag. I fear that it will make Tiananmen Square look like a picnic.

Also, my reference to the Balkans was the pre-WWI Balkans, not the post Cold War Balkans. Not that it really matters. The Balkans and the MIddle East are destined for strife for a long time. In the 1910s Balkans, there was a lot of unrest. People wanted to be rid of the Hapsburgs. IIRC, Ferdinand's killing was perpetrated on the anniversary of a famous battle in the 1200s or some shit. I guess it was symbolic when you've had so little self-rule that the 700th anniversary of winning something is still important to you. The Middle East post-Arab Spring and post-Islamic State has left the place even more in ruins than it was. My assumption is that it could easily be the start of a major international incident, paralleling what happened in 1914. Not saying it's likely; just saying it's easily imaginable.

I fully agree with you that a civil war is highly unlikely, and for the reasons you cite. There's no regional specificity to our problems. Even within conservative states you have 40-45% of the population being liberal and vice versa. Urban-rural divide doesn't track so well as a stark geographic divide. I can however easily see some form of domestic terrorism increasing, and not just of the Timothy McVeigh variety. Perhaps maybe we'll see young liberals trying to terrorize the Zuckerbergs of the country. I wouldn't participate but I might also think some people get what they deserve.

And let's face it. Doing exactly what the Republicans did legislatively is bad. Bad. Full stop. It's no way to run a society. You can't fight absolutism with absolutism. Tell people no and they'll say, "fuck you." Show them a better way and they may want in. Infrastructure is a better way. Even Trump thought that. He had infrastructure week like 50 times in 4 years. Don't fuck this up, guys.

China has done everything they can to make people unaware of Tienamen Square but fundamentally, THAT is the future China faces.

There has never been a period in China's long history in which innovation, cosmopolitanism or even curiosity have flourished. On the other hand, the ebb and flow of Chinese trade is writ large across the historical record: auslanders take power, innovation happens, conservatives ride a wave of cultural resentment and the ethnic cleansing begins. That's China.

Which is my basic beef - There's a lot of "this time it's different" in everyone's thinking without any analysis or investigation into reasons why it might possibly be true. Facebook? Facebook allows you to hate the fuck out of people you'll never meet. Wars? Wars are over resources. Terrorism? I mean, here's the rate of violent crime in the US: 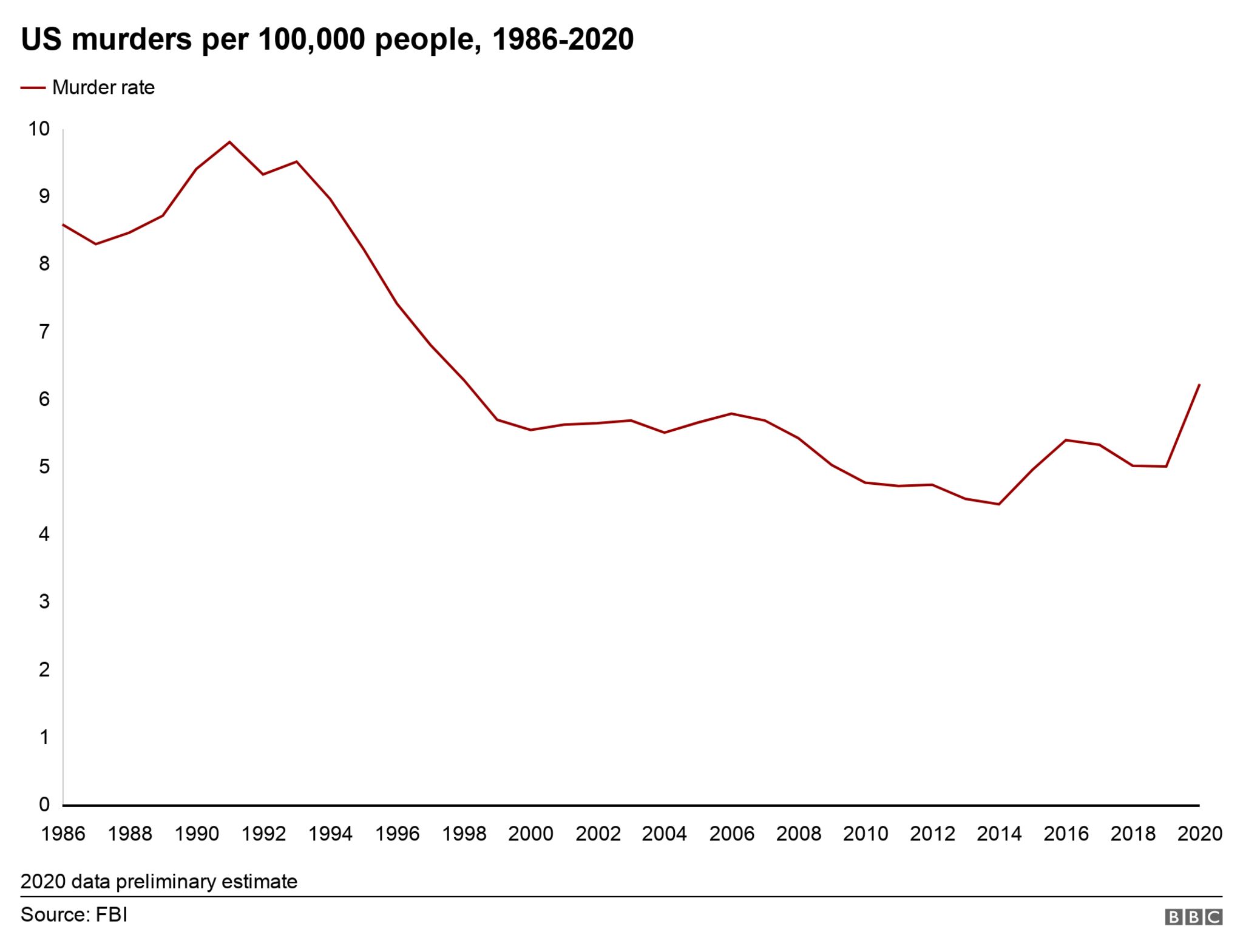 Middle of a pandemic, everyone at each others' throats, George Floyd having his neck stepped on on Facebook, Proud Boys marching on the capitol and last year was all the way up to the fuckin' Monica Lewinsky scandal.

"International humiliation" is what the Chinese cry whenever they aren't allowed to exterminate Uyghurs with impunity.

Everything I have learned from Chinese people tells me that this is incorrect. It's part of their identity. It's the theme of their national anthem.

The Chinese have always had a grievance against any foreign power doing anything other than bowing before their superiority. It dates to the Qin dynasty. Whenever they have been overrun - and they have been overrun often - it is always a humiliation against the celestial order because only the Han are human.

If Western powers followed the conventions of the Chinese, "Europe" would be called "Armenia."

I'd say that's an outdated characterization that we could tell ourselves. They've been building more of everything for the world for quite some time now, and they don't just box and ship it. Much of China looks like the US 10 years from now and they know it. They have also been traveling the world.

So "dominates global trade" is "who has the lowest prices" in this case?

The entire problem China faces is they can no longer afford to undercut prices. That is a story as old as time itself - China flourishes as they spread largesse to trading partners, and declines the minute they decide they don't owe their trading partners anything. It is literally the end of every dynasty in Chinese history.