In my last post, mk asked if I had tried multicolor linoprinting.

That night I was working my first cuts on this repeating pumpkin pattern. Tonight I'm looking at the three carvings together and trying to get a better alignment.

I realized not every #showhubski had to be like 5 pages and thorough as fuck and realized my last post was just as good, too, and a lot easier to make without having necessary less value. So here's another casual thread with a big picture dump at the end if you want to see pictures of this carving in progress.

Here's my first attempt at both an invisibly repeating, AND multi-color linocut/stamping pattern. 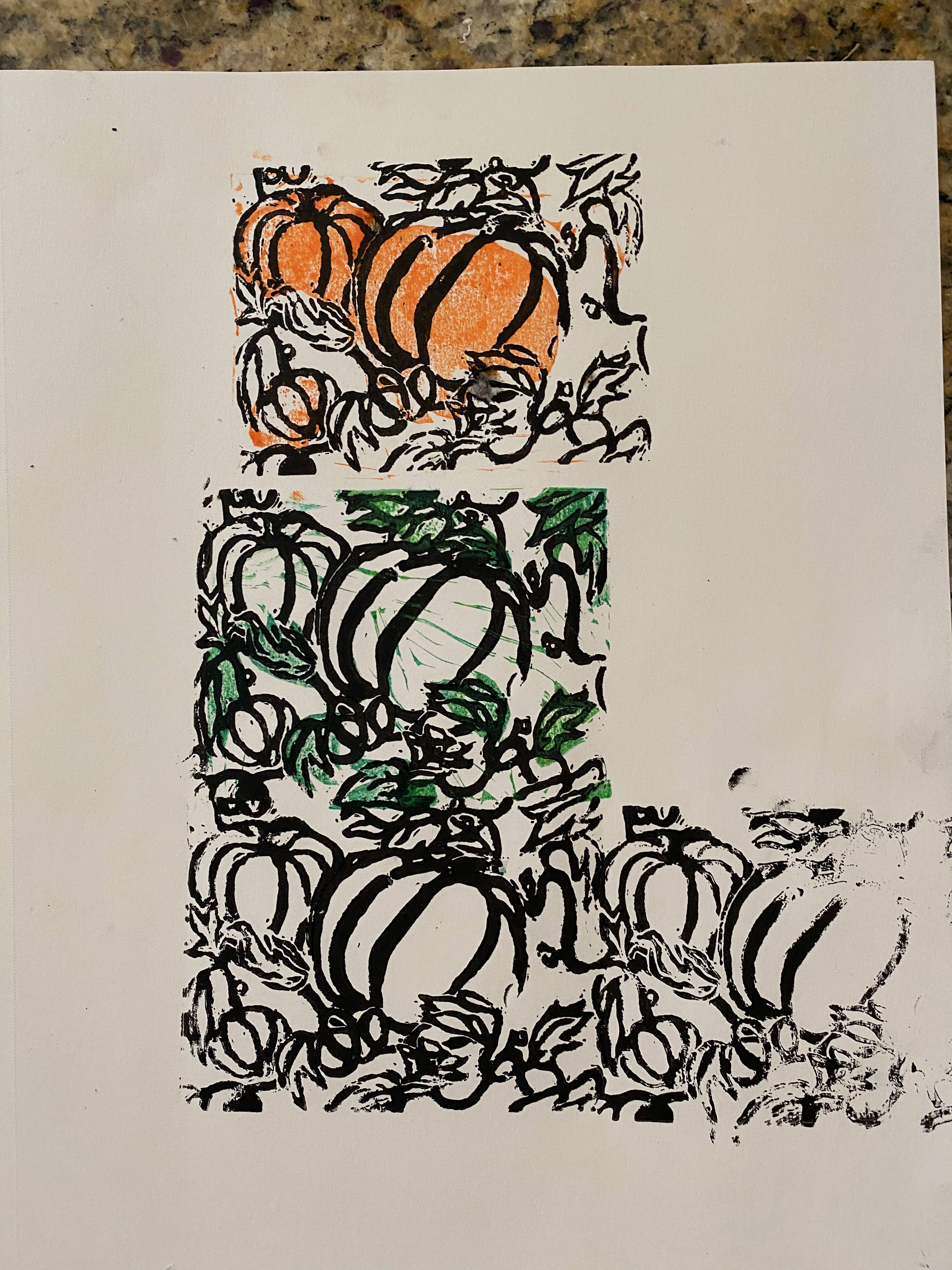 Yup, I went for "complicated".

Here's just the base stamp (the only portion that is actually on lino btw) in black. It's repeating pretty well, and besides, with a lino there's only so much correction that can be done by the time you get to the point of "I can stamp it and see the pattern." By that point if you have overcut or something is not aligned, it's just not aligned and you can't fix it. 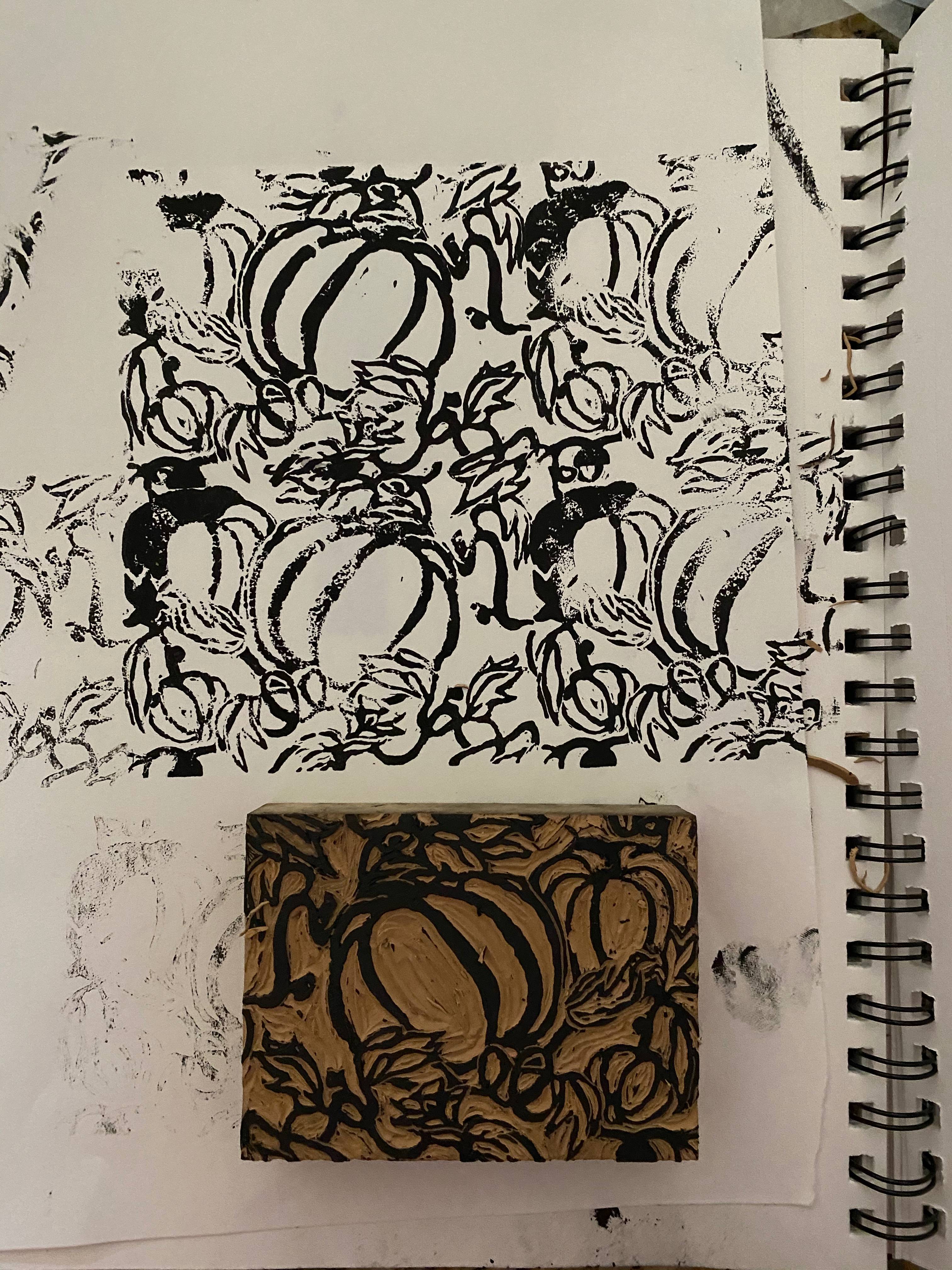 Tonight I decided to compare each layer side by side with the base to see if I could see anything wrong. 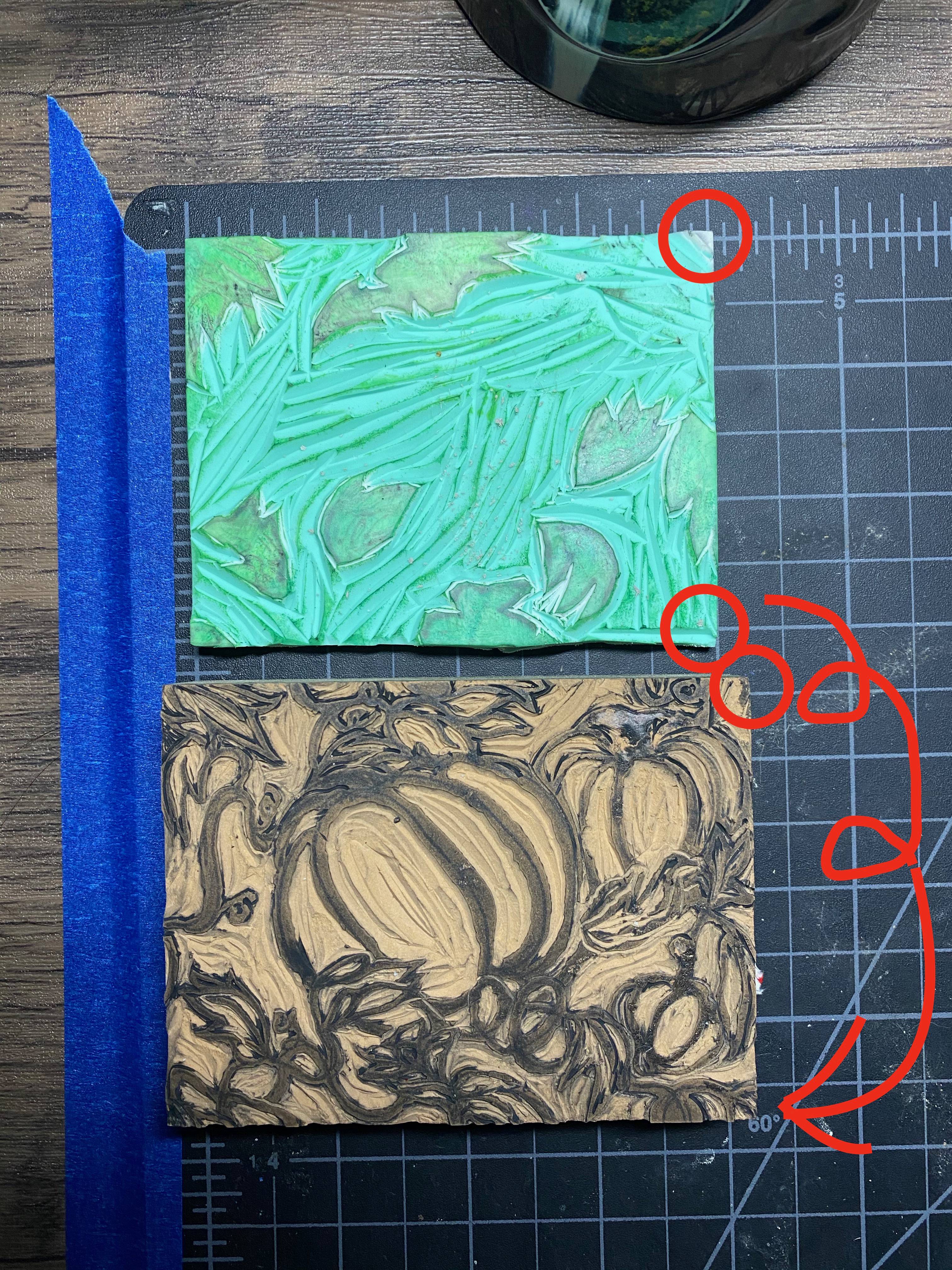 I DID draw this pattern out first and then trace 3 copies to try to get as exact as possible. It's what you're supposed to do. Still, hey look at those corners. It may not be easy to tell from the photo, but it looks like I accidentally migrated a corner of color. It should be in the bottom right corner of the green stamp -- but instead you can see I left that little piece in the upper right hand corner.

It means I won't have color there when I planned on it, but I can also remove the color from that color where it doesn't belong, and that'll help clean up the next print when I try it.

I also have to clear out all this blank space in the middle (that's why there's green lines in the practice tri color print) -- which is boring AF.

So this way I got to at least see/learn something interesting to fix! 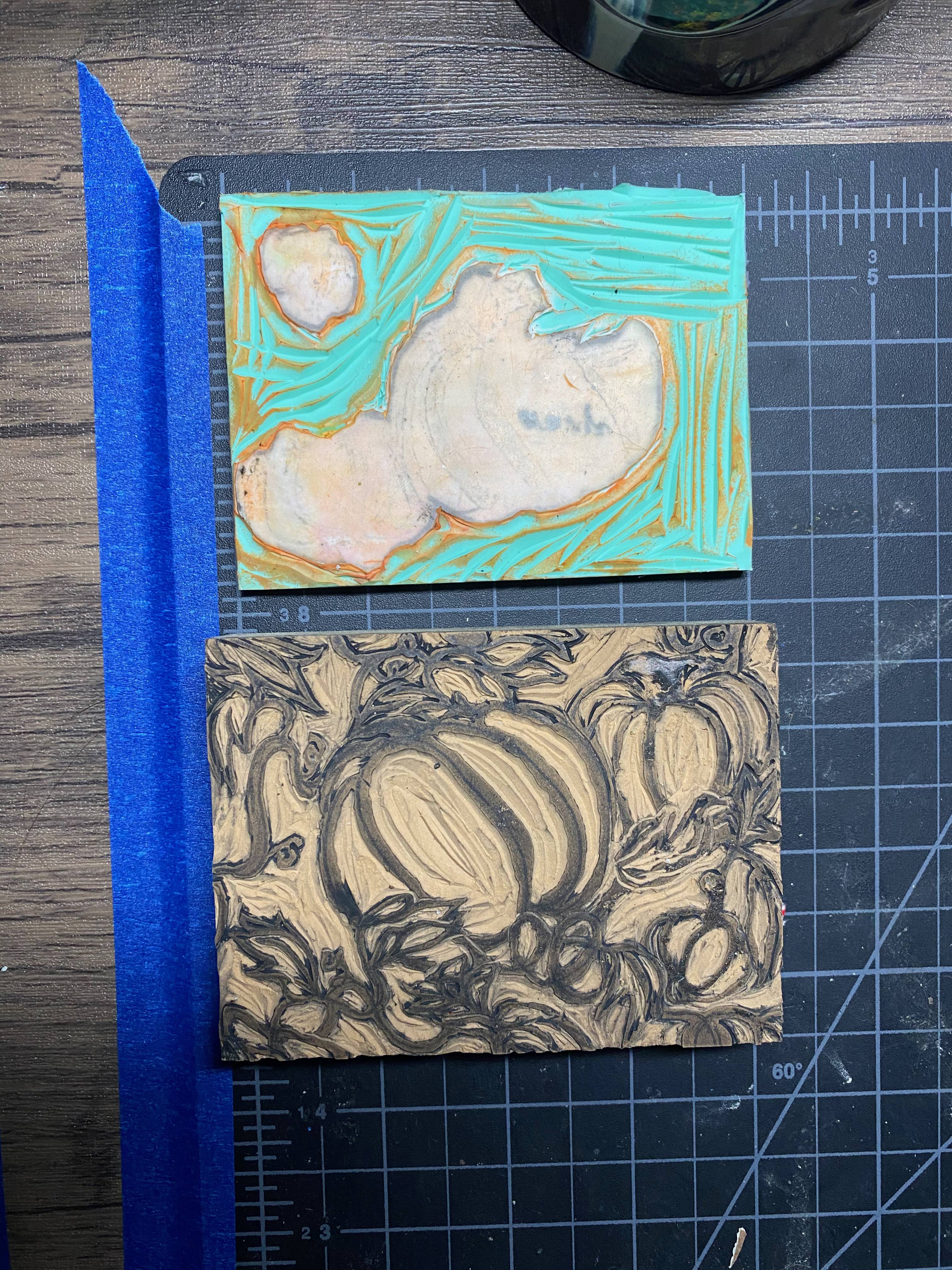 This photo was staged for this post which you can tell because the green stamp is not correctly aligned. The little pumpkin should be in the lower right. 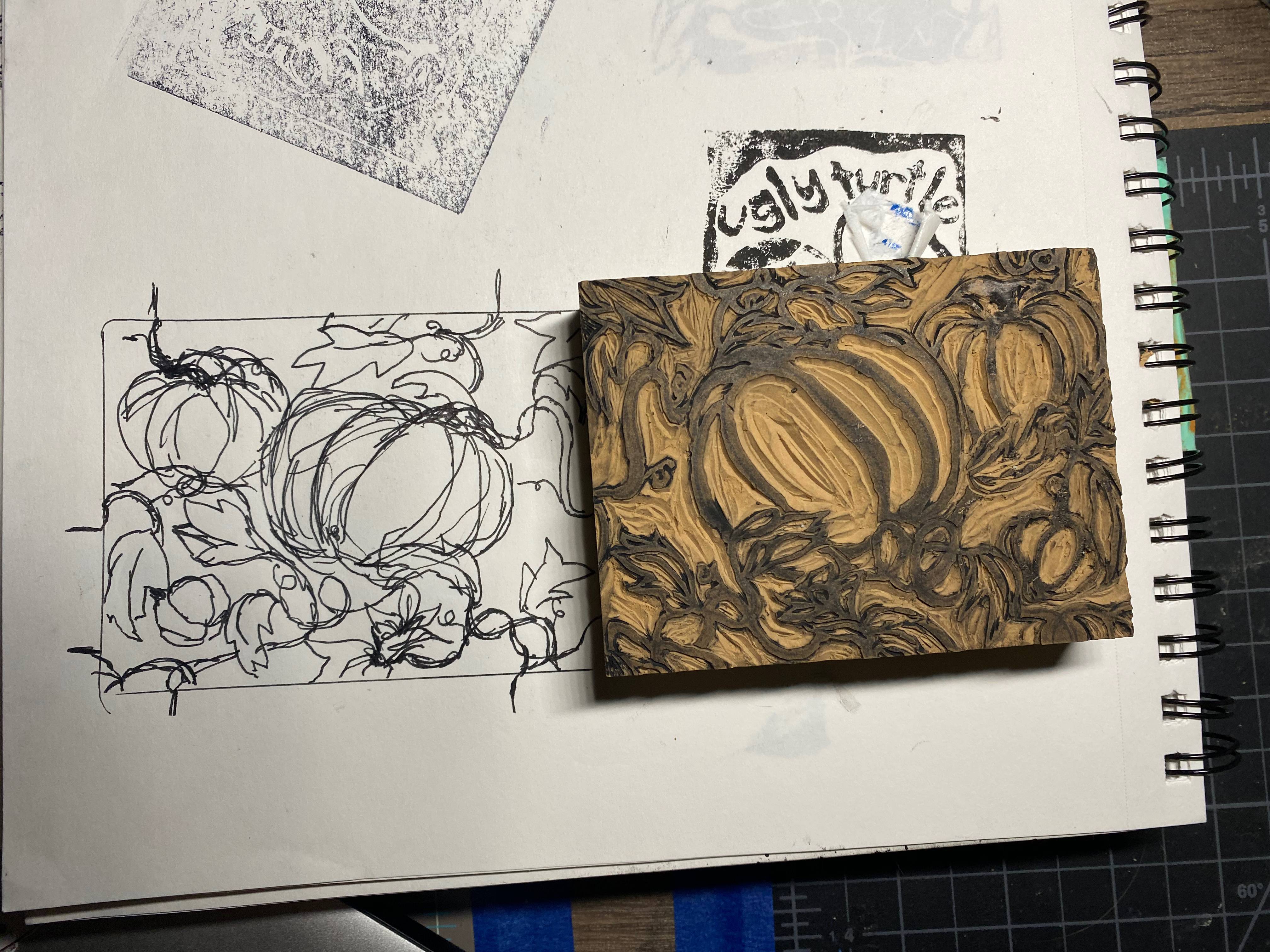 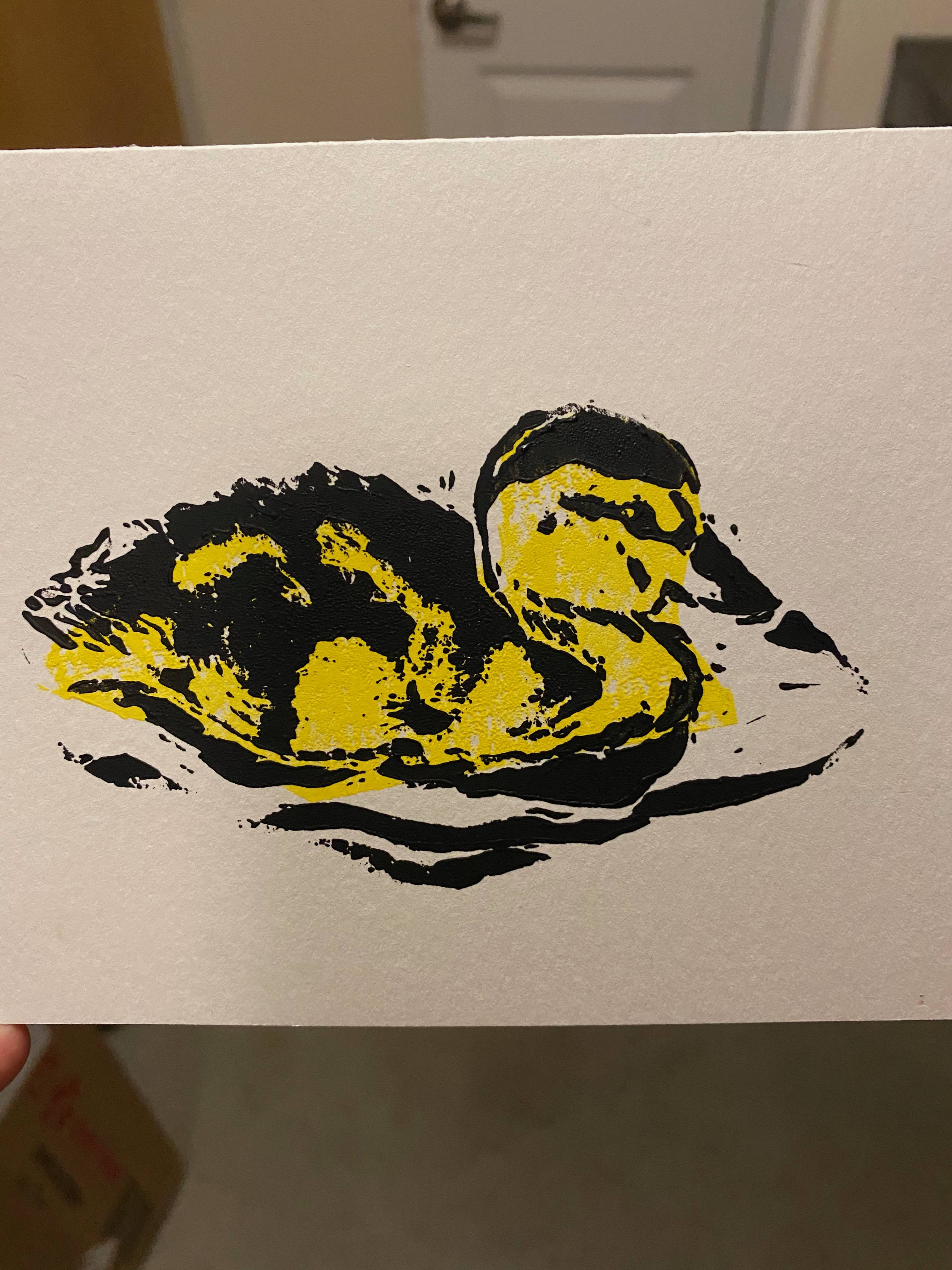 My actual first multi-color linocut attempt. Technically the pumpkins are my second. This was an extremely basic 2nd layer however. I barely cut it, I believe I actually had a scrap that was almost the right size to make the foundation of the shape for the yellow bit.

Come back in a day or so because I should be able to post my second pass at getting a good print of this thing in the comments!

I treasure the cards you made me. I've given away a few with birthday presents and they have stayed on fridges and mantelpieces, never to be thrown away.

It was a great prompt/challenge/linocut request, Ben! I honestly can't believe I've done 6 (BIG) bird linocuts and that's partially because of you and your request for a "cute birb" that help me keep going on this project. And from your commission request I not only ended up making 10-15 more cards for my store inventory but it essentially led me straight to another purchase as someone else saw the prints I was making for you and really liked them and bought several from that session as well.

That was honestly probably one of the most rewarding commissions I've had. One thing I realized is I enjoy custom projects and want to encourage shoppers to reach out and ask me for product/ideas like you did.

I'm planning a shop overhaul/revolution/"2.0 release" -- early 2021ish, that's my ballpark -- and one goal is to make it really clear that I welcome requests like that. Also honestly anytime someone I know buys from me I am both flattered and touched. It's really meaningful that I have friends that do help me keep going with this silly little art shop.

So really, thank YOU Ben. Also I just counted this morning and I have literally a dozen more duckling postcards (just ducklings -- 12 ducklings and 1 heron, nothing else) -- I am happy to send some more along if you'd like them. (And...sometime this afternoon...pumpkin postcards will be live too :D)

Well holy chit you guys. I tried a new technique for printing (one of those fancy methods people use to make sure they's shit's aligned) AND I decided to scrap both of my first attempts for the orange and green layers and just trace the linocarving and create new stamps for the colors. (The first time I measured the blocks for the orange and green layers, I was using scrap material and ended up cutting each block just a little bit wonky to try and fit -- a bit short, a bit wide, you get the concept -- and it was really going to fuck with any alignment methods that are recommended to use for linoprints.) 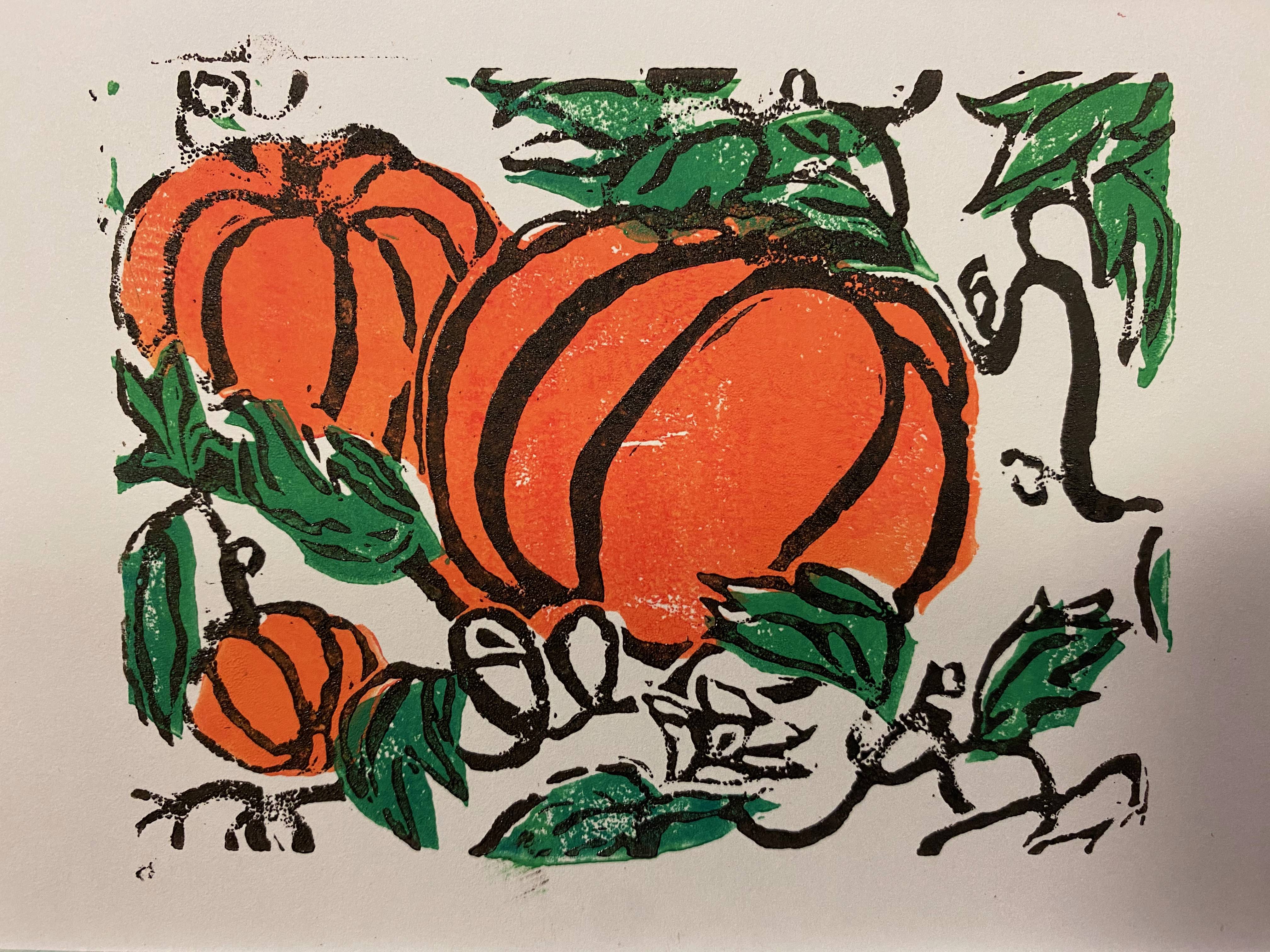 Also not to humble brag but I had to mix the orange and green both by hand. Which was one reason I was kind of procrastinating a little bit on this print.

So I guess next step: figuring out how to align a the pattern so as to tesselate it across a piece of paper...hmm... 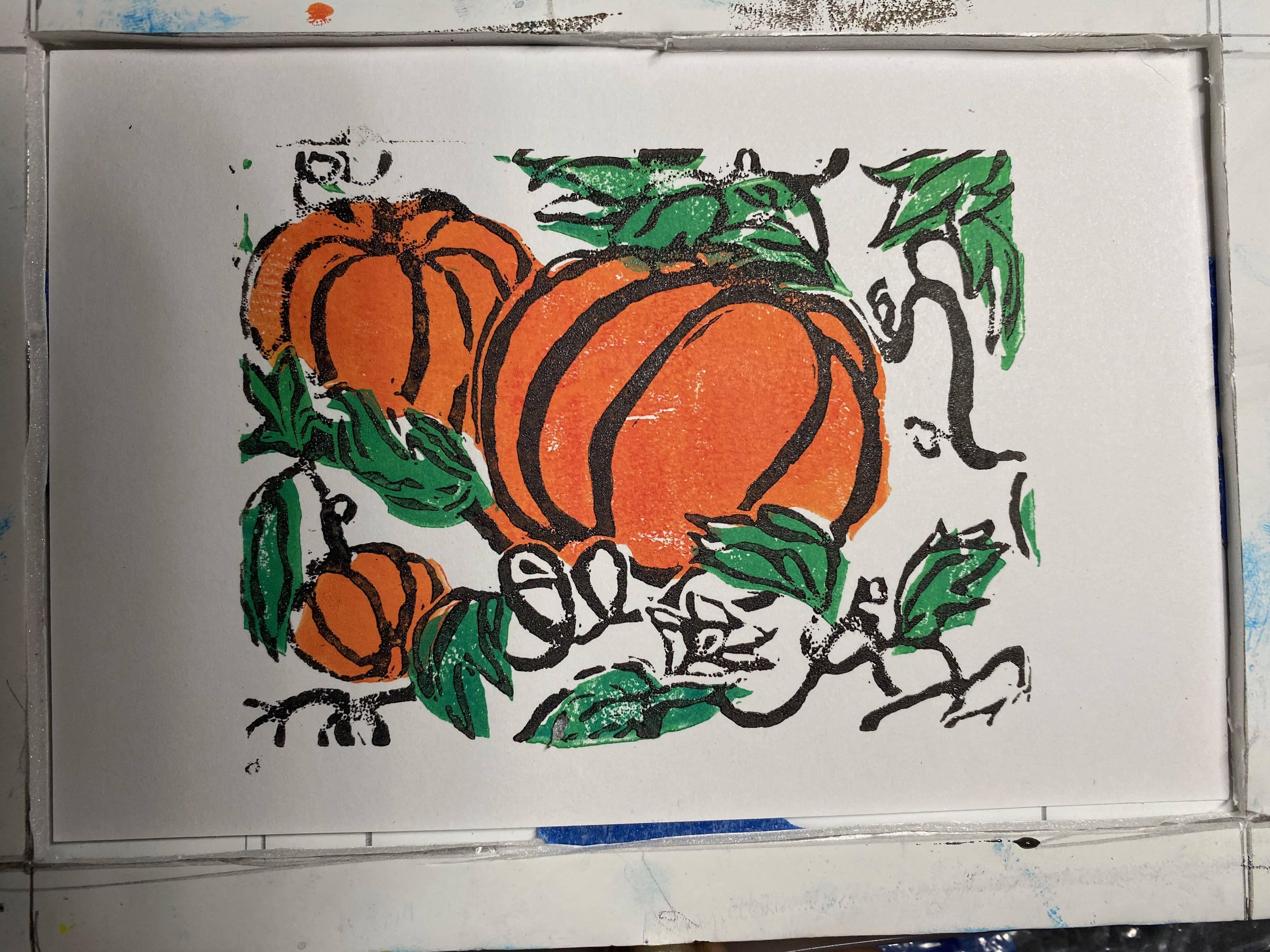