Here's the way to look at it: COVID-19 is "the flu" if "the flu" were more contagious, could not be inoculated against and killed more old people. We've had the flu vaccine since 1938. Yeah, the flu shot has been optional but it's been around. You can get it at CVS. It probably costs $25 with no insurance, between $10 and $0 with.

It's the public health considerations that you need to focus on.

So we deliver babies. Every hospital we talk to has a protocol for dealing with coronavirus. They all include things like "you get two companions period, no in and out privileges" which means whereas it used to be you, your wife, your doula, your mom, six cousins and your wife's best friend at the hospital, it's now you, your wife and your doula period. Okay, we can do that.

A couple of them include phrasing like "maternity patients showing symptoms of coronavirus will be isolated in a negative pressure room." Okay, makes sense.

But how many negative pressure rooms does your hospital have? And are they anywhere near the maternity ward?

In total, 31 firefighters and 3 police officers would ultimately be quarantined or isolated. As of this writing, 18 are showing symptoms.

Kirkland is down 31 firefighters from one outbreak. Best guess? That's maybe two out of five fire stations. One uncontained outbreak has taken out 40% of Kirkland's emergency response capacity.

And that's with everyone around here freaking balls, by the way. We're cancelling schools, avoiding work. Highways be empty, dawg. Let's say that we're containing it appropriately and knocking that R0 of 2.4(?) down to an R0 of 1.4(?). Our 31 firefighters are going to be 45 people in about another 3 days. Next week it's gonna be 60. Assuming everyone is self-isolating and washing their hands.

Suppose one of those firefighters has a friend who works at Domino's and they shook hands.

“Hey, you guys are supposed to be in self-quarantine,” the firefighter said.

“Well, our chain of command talked to your management, and they say something different.”

The nurse insisted; she hadn’t heard anything, she said.

The firefighter looked down the hall and saw two caregivers in scrubs -- no mask or gown.

“What the hell?” the firefighter thought. “Who is not telling you that you have two suspected coronavirus cases?”

So okay. You're young and spry and you've fought the flu. I'm young and spry and I've fought the flu. I'm either fighting the flu or coronavirus and I hope to fuck it's coronavirus because then at least I'll have it out of the way. But I've been able to sum up the energy for light soldering and occasional shopping for about ten days now. I haven't been hit this bad by flu in maybe six years - back when I didn't do flu shots 'cuz I was lazy. My contribution to the economy since late February has been netflix and chill.

But between you, your wife and your wife's best friend? Statistically, one of you is losing a parent to this. And you're losing them to pneumonia, and you're losing them to respiratory collapse, and if your parents are lucky, they're going to the hospital but if they're not, the American Hospital Association is estimating about 1.9 million people are going to the ICU over this 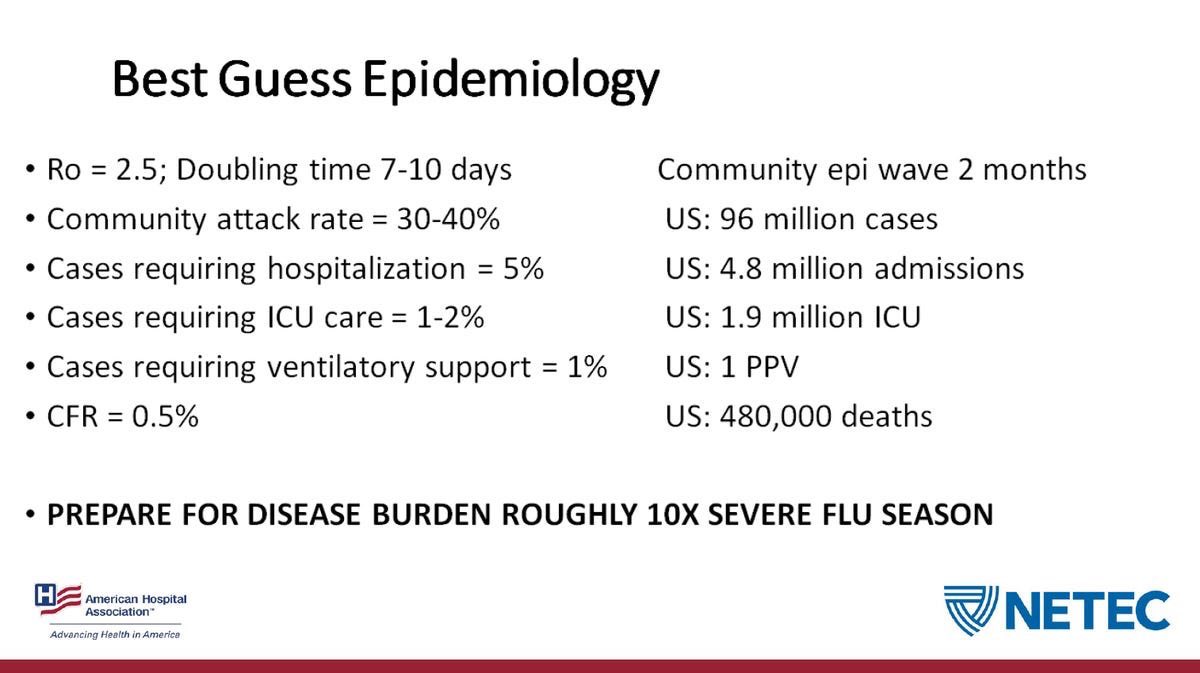 And there are about 60,000 ventilators in the United States.

No, they ain't all going at once. But this is an exponential situation.

Fundamentally? More people are going to get sick, and they're going to get more sick than usual, and our healthcare system does not have the capacity for it. Which means we're going to be experiencing a more severe flu season with less medical care. And that is generally bad for the vulnerable.

Does that make sense?

This helps tremendously. I need to noodle on your points, and not be on my phone keyboard to respond intelligently.

My contribution to the economy since late February has been netflix and chill.

This resonates with me. Somewhere on Hubski - I think mk made the comment that this will be a loss to productivity, and wages, and medical expenses. I can see that impact coming - and it sucks.