A while ago I started dabbling in a vague corner of the broad realm called "making comics." I came up with a few series of still images, added very wordy captions, and honestly started calling these comics because I was shopping them around for publication in lit mags and some lit mags advertise being open-minded towards comics. Whereas "weird tongue in cheek art stills" combined with "wordy captions which really did too much of the work to make the sketches funny, probably," seems a bit too esoteric a media genre for lit mags, even online lit mags, to actively seek.

Here's some examples of what I'm talking about. Yes, they're comics, but no they're not really comics, either. There are some clear issues with the art/image quality and size which a first-year art student would/should quickly notice, and see me for the dilettante which I yeah...kinda truly rather definitely was.

Here is when I'll admit that I know literary journals often seek art and rarely get submissions of it; most artists I know aren't in the business of trying to get published in fiction or poetry magazines. I suspected my images were funny and interesting enough, in a relatively parched market, to push through to publication.

I'm still pretty sure that's what happened. Then again, as I said earlier: most people pursuing art careers or accolades aren't going to consider lit mag publication as a vaunted mark of achievement. I got some recognition, and got to share stuff that I made that made me laugh, which is what I wanted.

I also decided that since I'd already gone and named my art instagram Comics by E. H. Brogan that maybe I should stop being a hack and learn more about the whole making-comics thing. After all, my success in the arena was truly small and handed down by writers, not artists -- I knew how much I didn't know, and comics intrigued me. Why not try and live up to the reputation I'd already conned my way into/committed myself to inadvertently with a poorly narrow choice of instagram handle?

That's what brought me to Coursera and the How to Make a Comics Book MOOC.

I audited the course, because I sure as hell wasn't going to pay $50 for a certificate I didn't need and wouldn't put on my linkedin or resume, like, ever. That meant that I wasn't able to actually submit any assignments through the course. Sounds crappy, but the end result was I was able to complete the comic book assignment at my own pace.

I started the course around the end of September.

I thought I was behind but now I realize it's a 6-week course and I'm finishing it up about a month after I started. Oh, well. I have to admit I skipped some stuff. Coursera doesn't know I watched half the videos which I did because I wasn't logged in and blah blah it was annoying and I wasn't going to replay videos just to get stars so I decided, Coursera doesn't need to have an accurate picture of my progress in the course, so long as I continue through the lessons on my own. So that's what I did.

I really enjoyed the videos. Half the links to reference materials no longer work. I hate GIMP and I hate that the course says "Oh you can buy photoshop or you can use GIMP, we're only giving you instructions for photoshop but the GIMP instructions will be along soon except the course was put up in 2010." Clearly no one's gone back to it since then, not that I can blame them since hey, this shit is free for me, y'all.

So basically I did what I felt I could; I watched all the videos, I read about half of the readings, and I completed every assignment up until Week 6 (Digital Conversion and Booklet making) faithfully.

I do really feel like I learned a lot. I certainly have a different perspective on comics and what they actually are now. I have a lot more respect for people who make them regularly or professionally, and frankly I'm in awe of Sandman and Swamp Thing and the other graphic novels I've read in a way I wasn't before. There's so much more to comics or graphic novels than I had thought of or been able to appreciate.

I would recommend the course to anyone whose curiosity is piqued by this post. It was an enjoyable, easy course. Unlike some other Courseras I've done before, this felt more fun and less text-bound, less focused on memorization of endless dull facts and lots of time in front of a computer screen working to remember stuff while wondering why you decided you wanted to learn such tiny details about, say, the Rolling Stones in the first place.

Anyway, I'll wrap all that writing up with this! My final project! I skipped half the assignment of Week 6 because it was basically like "Make these 4 pages into a booklet!" and I was like "Bitch I'm doing this in a different program than you have instructions for even though you said this software was the recommended free choice if I didn't want to buy Photoshop (for a free online course)!" And then I was like "Bitch I know how to make a booklet I do it all the time!"

And then I was like "Bitch if you've read this far it's time I let you know you can use the code HUBSKEET for free domestic shipping on anything you might wanna buy from my Etsy shop!" From now until Oct 31, because that's my birthday, and gifts should be had by all.

And THEN I actually was like "Here's my comic book." 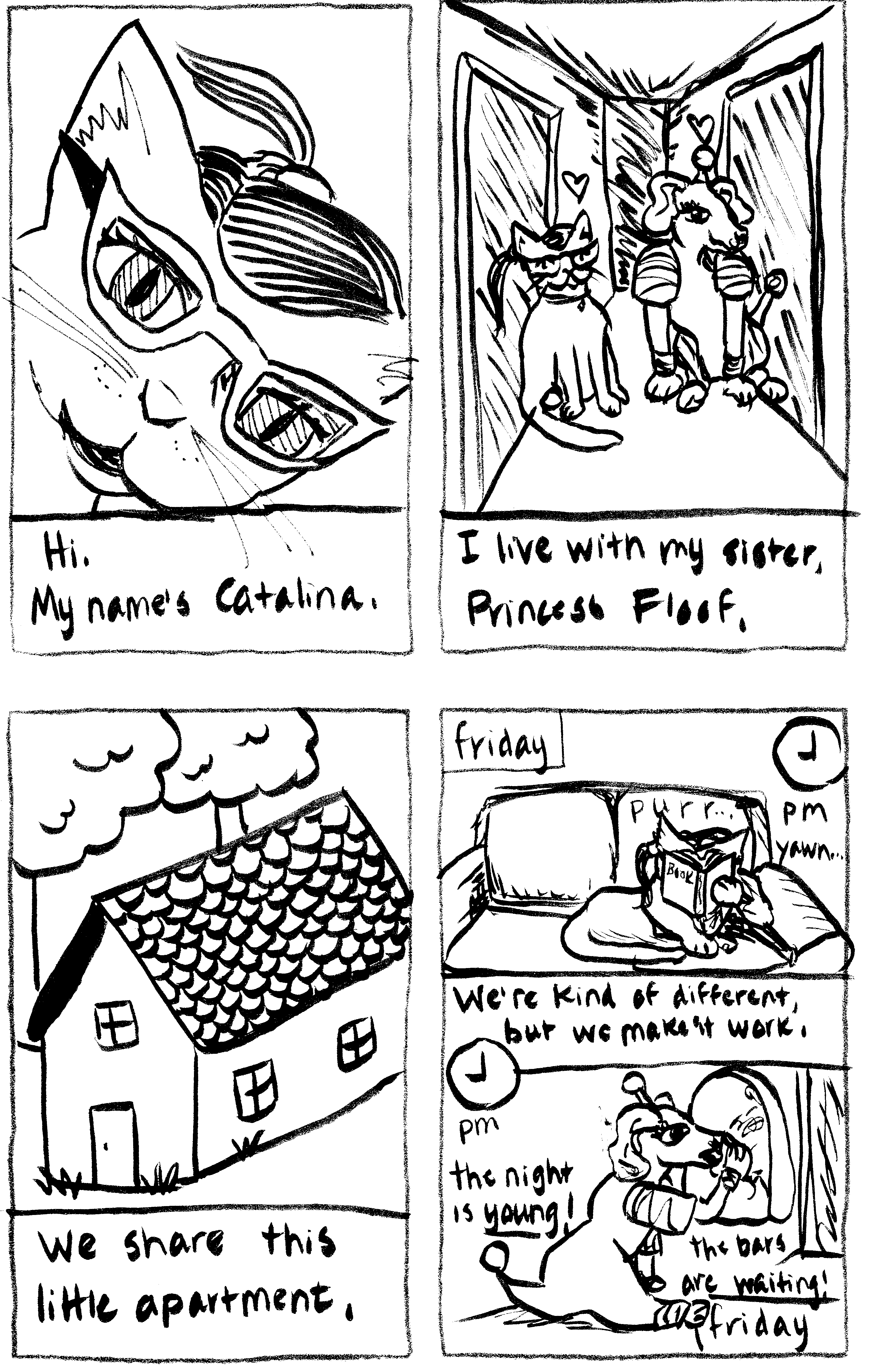 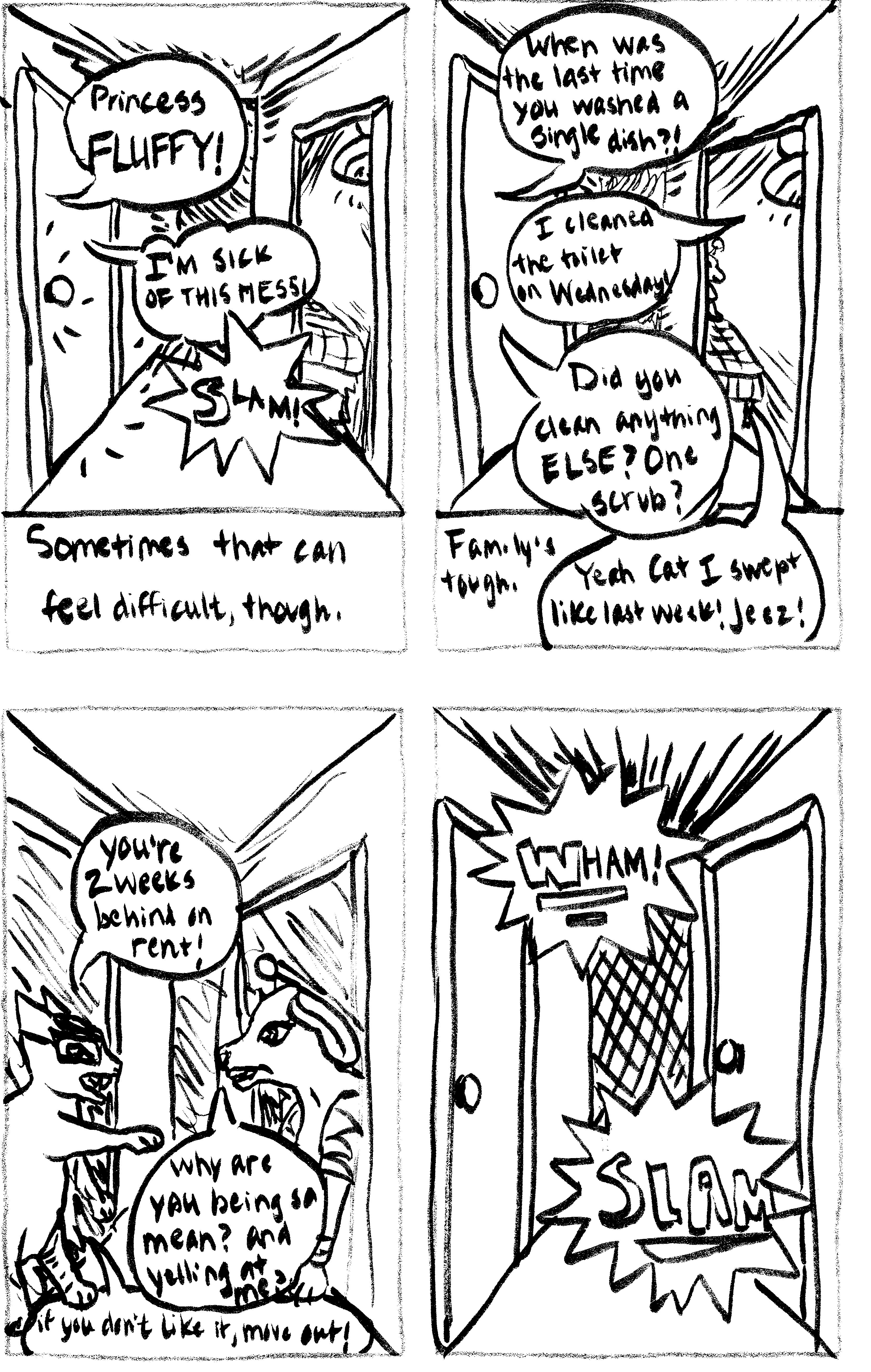 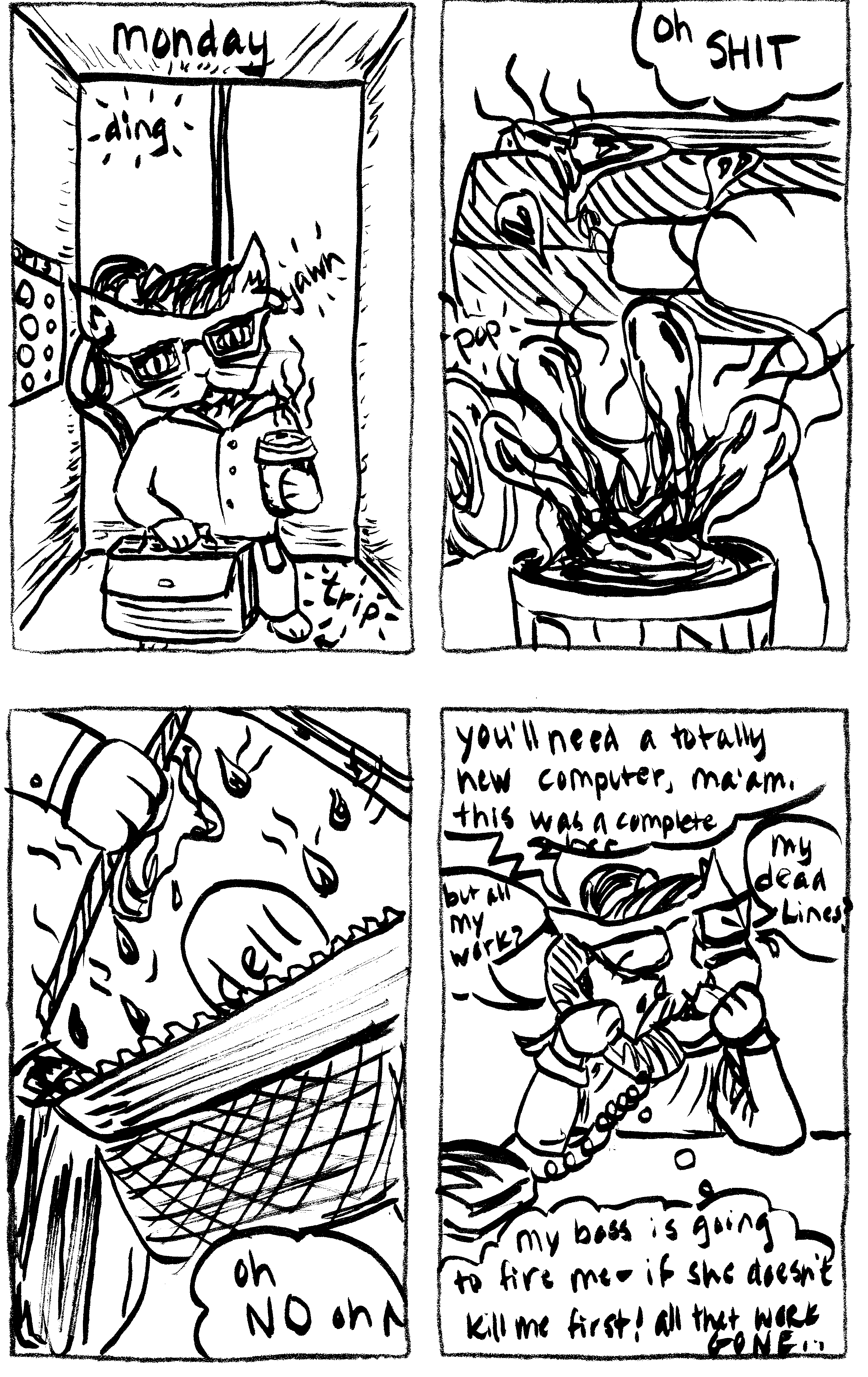 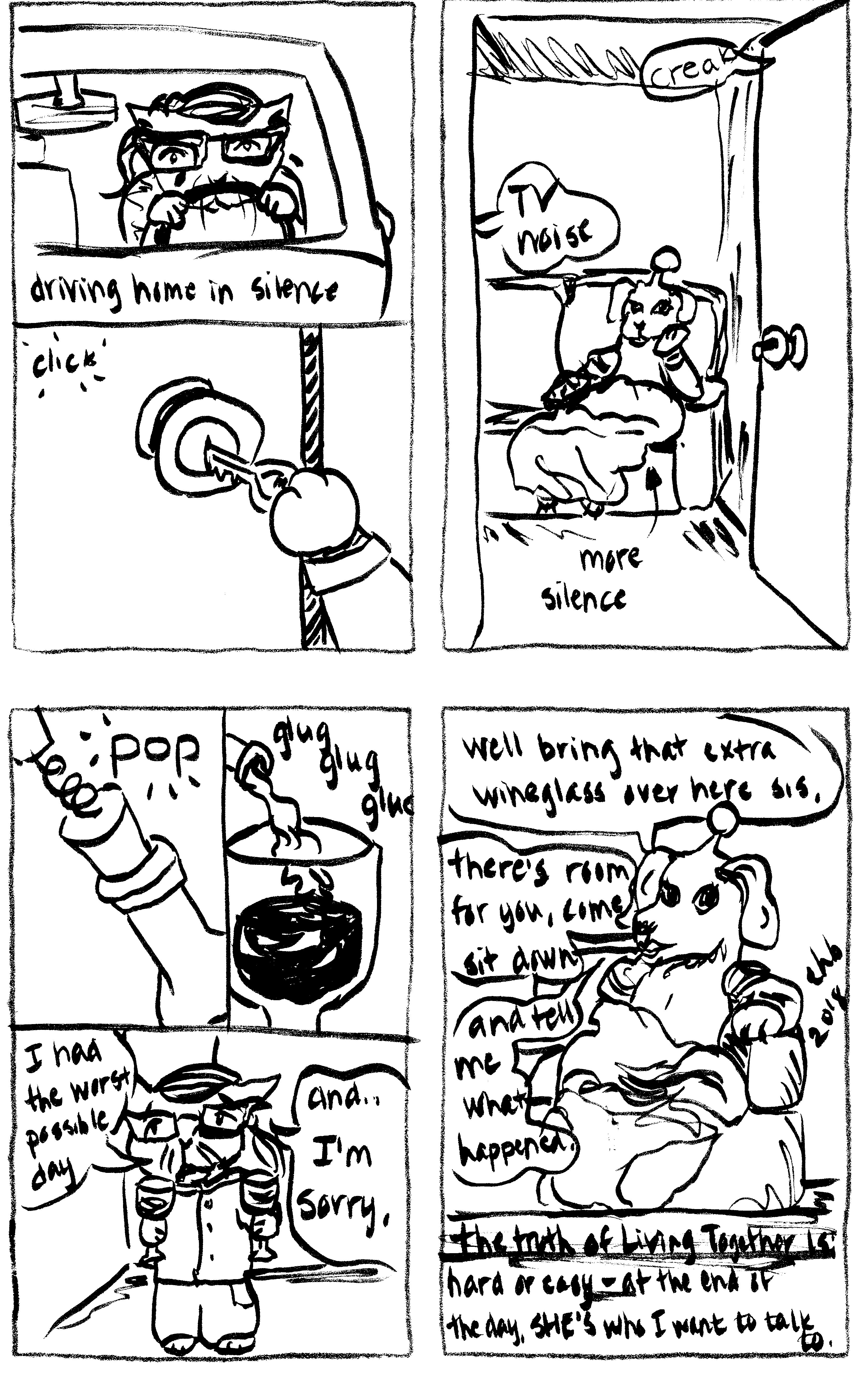 In closing, I did at least learn a tiny bit more about image editing and GIMP than I knew previously. So that's progress. This is my biggest weak spot when it comes to -- well any art I want to share outside of in person in any way, at all. It's very frustrating. I'm glad I was able to learn even just a fraction more about how to use GIMP than I knew before. Even if I suspect I need a different software and maybe also an upgraded computer if I want to edit images without hours of frustration. You know...one day.

If you're primarily using it to draw you might find Krita less frustrating than the Gimp.

I actually don’t have a drawing tablet. Everything is by hand. That’s part of why I think I have so much trouble with digital retouching and clean-up. I’m having to scan images in first which I finally have mastered but just the fact that they originated from a much messier process where there seems to be a lot more tendency to mess in the lines (blur, texture if you’re using pencil on paper, etc).

A drawing tablet is on my long term list but so is a cricut and frankly I kinda really want the cricut first.

I really really enjoy doing as much as I can by hand. I’m sure I’ll enjoy digital drawing when I try it but I get a kick out of manipulating images by, say, cutting out pieces and layering them to make compromise images— as opposed to the idea of cut and paste which is just kind of - where’s the fun in that?

A number of the pictures in my Queen Book were compiled using collage, etc. I created a bed image template and started nearly every piece off of that.

Wacom tables behave kinda stupid in my opinion. Points on the tablet are mapped to points on the screen so if you pick up the pen and move it the cursor will jump to a different point on the screen instead of staying where it was. At least that's how it was when I used one. An iPad with an Apple pencil is much more intuitive

Yeah. If my frustrations with multiple free image editing software has taught me anything it’s that I need intuitive and basic.

Or an install of MS paint and I could probably do a fair number of the things I want to do with my images. Damn you Mac.

I never got into the software when I had an iPad but I played with it some. There are some powerful free programs. I'm sure the paid ones are awesome

My ex lost my iPad and never told me how. Bitch...

I tend to use David Revoy's brushes more than the defaults. I think the defaults recently got reworked, tho?

I know an embarassing amount about comic books.

Yes, they're comics, but no they're not really comics, either.

In Understanding comics, Scot McCloud has an entire chapter that attempts to define what a comic is.

Surprisingly, Atlanta and Athens, where the University of Georgia is, have some interesting comics scenes. Bizarro Wuxtry is a comics shop in Athens with a big selection of mini comics

I think Athens has a mini comics con too. I'm over ten years removed from that city though.

Atlanta is home to Top Shelf. Which is currently the home of Alan Moore which should say something. He didn't even want his name on a Marvel reprint a few years ago. He's done with both major publishers.

I certainly have a different perspective on comics and what they actually are now. I have a lot more respect for people who make them regularly or professionally, and frankly I'm in awe of Sandman and Swamp Thing and the other graphic novels I've read in a way I wasn't before. There's so much more to comics or graphic novels than I had thought of or been able to appreciate.

Chris Staros is the president of Top Shelf. I've met him twice and he's big into the unique storytelling potential of comics. Top Shelf comics tend to be gorgeous. In content and presentation.

You might look into Top Shelf for some reading material and the mini comics scene if you want to keep doing this.