It's GDPR-blocked for me. (I'm tempted to insensitively dub that GDPartheid.)

Siddharta Mukherjee noted that modern cancer treatment is attacking the disease on three new vectors: vastly more discriminate cell destruction, mutation-chain-stoppers, and anti-metastisizing methods. Does this fall in any of those buckets?

From what I can tell, this sort of falls into the 1st category, along with a bit of the 3rd. They take the patient's cells and look for a type of rare white blood cell called [tumor-infiltrating lymphocytes]( https://en.wikipedia.org/wiki/Tumor-infiltrating_lymphocytes) that can hit the cancer cells specifically, then make a bunch more of them and put them back into the patient. It's promising because the treatment is effectively an extension of the patient's own immune system (it won't provoke an immune response or poison the person's own cells), the TILs can reach anywhere that the bloodstream can reach (helping to deal with metastasis), and because there is potential for this type of therapy to work on multiple different types of cancers (rather than a specific drug targeting a specific cancer's oncogene).

I just finished The Emperor of All Maladies and it's a terrific read. The timing of this research result is pretty neat.

You can use Opera's built-in VPN to circumvent those locks. Here's the article just in case it wouldn't be inconvenient. 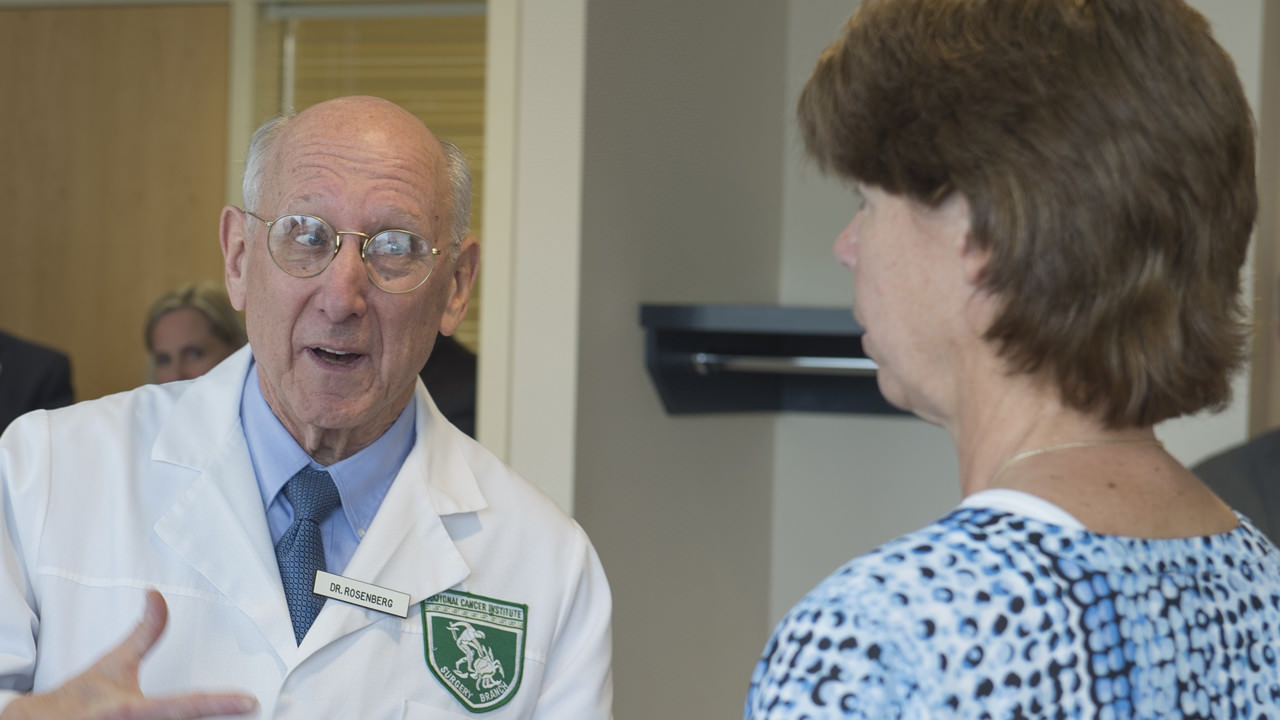 Dr. Steven A. Rosenberg of the National Cancer Institute talks with Judy Perkins, who no longer has any sign of advanced breast cancer after receiving an experimental immunotherapy treatment developed by Rosenberg's team. (National Institutes of Health Clinical Center)

In the all-hands effort to harness the powers of the immune system to fight cancer, scientists have reported a new approach that eliminated all evidence of advanced-stage breast cancer in a 49-year-old woman who had run out of treatment options.

The patient’s “complete durable cancer regression” followed a single infusion of her own immune cells, which were painstakingly chosen for their ability to recognize and fight her tumors — then expanded into an army of 82 billion identical cells.

More than three years later, the patient, Judy Perkins, is not only alive, but seemingly cancer-free, according to a report published Monday in the journal Nature Medicine.

“I have definitely hit the jackpot,” said Perkins, a retired engineer from Port St. Lucie, Fla.

In the fast-moving world of cancer research, the new report is being hailed as a development that could open a broad new front in cancer immunotherapy.

Existing immunotherapy drugs have shown little or no effectiveness against the kinds of solid tumors that account for 90% of cancer deaths, including those of the breast, prostate and colon. This new approach could change that, experts said.

“It’s elegant in its simplicity,” said Dr. Crystal L. Mackall, founding director of Stanford University’s Center for Cancer Cell Therapy, who was not involved in the new work.

When Perkins received her experimental therapy just before Christmas 2014, she said she sensed the optimism of the National Cancer Institute researchers who devised this new approach to immunotherapy.

It relies on immune system cells known as tumor-infiltrating lymphocytes, or TILs. The ones used on Perkins were picked because they could home in on four mutant proteins that were present in all of her cancer cells. An exhaustive search of her blood and a sample of her tumor turned up only 11 of these super-capable immune cells, so the scientists spent four months growing billions of copies in the lab.

The cells “were their babies,” Perkins said. “The doctors were all excited.”

But having failed a dozen different treatments already, including several types of chemotherapy, she was not so sanguine.

“I was just like, ‘Yeah, whatever. It probably won’t work, but maybe they’ll learn something, and it’ll help the next generation,’” she said.

As it happened, the TILs survived, replicated themselves, and refused to let up on Perkins’ cancer, wherever they found it. Over the course of five months, they broke down and carried off the two large tumors growing on her chest wall, along with four tennis-ball-sized tumors lodged in her liver.

Indeed, Perkins’ response to the immunotherapy treatment is “unprecedented,” Laszlo G. Radvanyi of the Ontario Institute for Cancer Research wrote in a commentary that accompanies the study. “We are now at the cusp of a major revolution.”

The success with Perkins’ breast cancer follows reports of similar responses in patients who had advanced-stage cancers of the bile duct, colon and cervix. All are examples of common cancers that don’t typically respond to other immunotherapies.

“This approach, while in its infancy, is capable of treating a wide variety of cancer types,” said Dr. Steven A. Rosenberg, an immunotherapy pioneer at the National Cancer Institute who led the team that treated Perkins.

If the labor-intensive treatment could be adapted for delivery to hundreds of thousands of patients, it could give patients with advanced cancers “a very highly personalized treatment,” Rosenberg said. Thanks to its targeted nature, it may even spare patients the debilitating side effects of chemotherapy, he added.

TILs would be a welcome addition to the growing array of immunotherapy treatments, experts said.

One class of drugs already on the market — “checkpoint blockade inhibitors” such as Yervoy, Opdivo and Keytruda — lifts the brakes on the immune system's initial assault on cancer. That allows the fight to continue instead of stopping, which occurs for reasons that scientists don’t fully understand.

For roughly one-third of patients with metastatic melanoma or advanced lung cancer, these drugs can drive cancer into remission. But they tend to work best on cancers that are influenced by environmental factors and are driven by lots of mutated genes.

In a very different type of immunotherapy called CAR-T therapy, a patient's T-cells are removed and genetically reengineered in a lab to better recognize the patient’s own cancer. The fortified cells are then expanded and reinfused into the patient.

The CAR-T approach appears to work largely on cancers of the blood and those that arise in children, malignancies that have relatively few mutations to serve as beacons for tumor-fighting immune cells. Two CAR-T immunotherapy treatments — Kymriah and Yescarta — have been approved by the Food and Drug Administration, and more are in the pipeline.

Extending immunotherapy to cancers such as those of the breast, colon and prostate is a logical next step, Mackall said.

Scientists were already aware that “there is some immune reaction” to these cancers, she said. “It’s just that it needs to be amplified.”

That’s exactly what the new treatment does. But the prospects for turning it into a viable option for a huge population of patients will hinge on whether scientists can find faster, simpler and cheaper ways to find, isolate and multiply the tiny subset of immune cells that are still in the fight, Mackall said.

“It’s labor-intensive,” she said. Then again, so are other types of cancer immunotherapy. “There’s a lot of things we do in medicine that are complicated. If it works, you do it. We’re going to figure it out.”

And not a moment too soon, said Dr. Patrick Hwu, an oncologist and immunotherapy researcher at M.D. Anderson Cancer Center in Houston.

“The majority of cancer patients still don’t respond to immunotherapy,” Hwu said. “So that’s the huge area of need. And that lays the groundwork for why this may be so exciting.”

Hwu said that in addition to finding ways to make TIL therapy cheaper, faster and simpler to administer, researchers will need to figure out which patients are most likely to respond as dramatically as Perkins did.

“That’s the hard work that lies ahead,” he said. “But it’s encouraging.”

4:10 p.m.: This article was updated with additional information throughout.

This article was originally published at 8 a.m.

22 months and counting. This may be the most promising case in the trial, so we still need to see what the other cases yielded, but that's still pretty good for a metastatic, resistant breast cancer. Does anyone see any potential downsides to the treatment besides cost? I'm thinking some sort of possible autoimmune response and the researchers' aforementioned concerns about the tumors evolving resistant proteins, but don't know precisely how big of a concern that is combined with the standard regimen.