Once in a blue moon, I have a book that I just completely devour in a few days. It’s not necessarily because it’s objectively good – Fire and Fury comes to mind, which is 90% a soap opera – but it is always because it fundamentally intrigues me in some way. Fire and Fury had this whole ‘history in the making’ feeling about it. (I’ve since departed from that idea after the 10% reflective parts of the book pointed out that Trump’s office, while causing lots of outrage along the way, is too incompetent to really change history that much.)

Also once in a blue moon, I finish a book and am left with some ideas or views that I keep thinking about in the subsequent weeks. Usually, such bookreading side-effects simply dissipate over time. But now that I’ve adapted Ryan Holiday’s notekeeping system into something that works for me, I actually have those thoughts written in my notes. And since I both devoured his latest book, and had some lingering thoughts, I thought the least I could do was steal kleinbl00’s title scheme and discuss them with y’all. 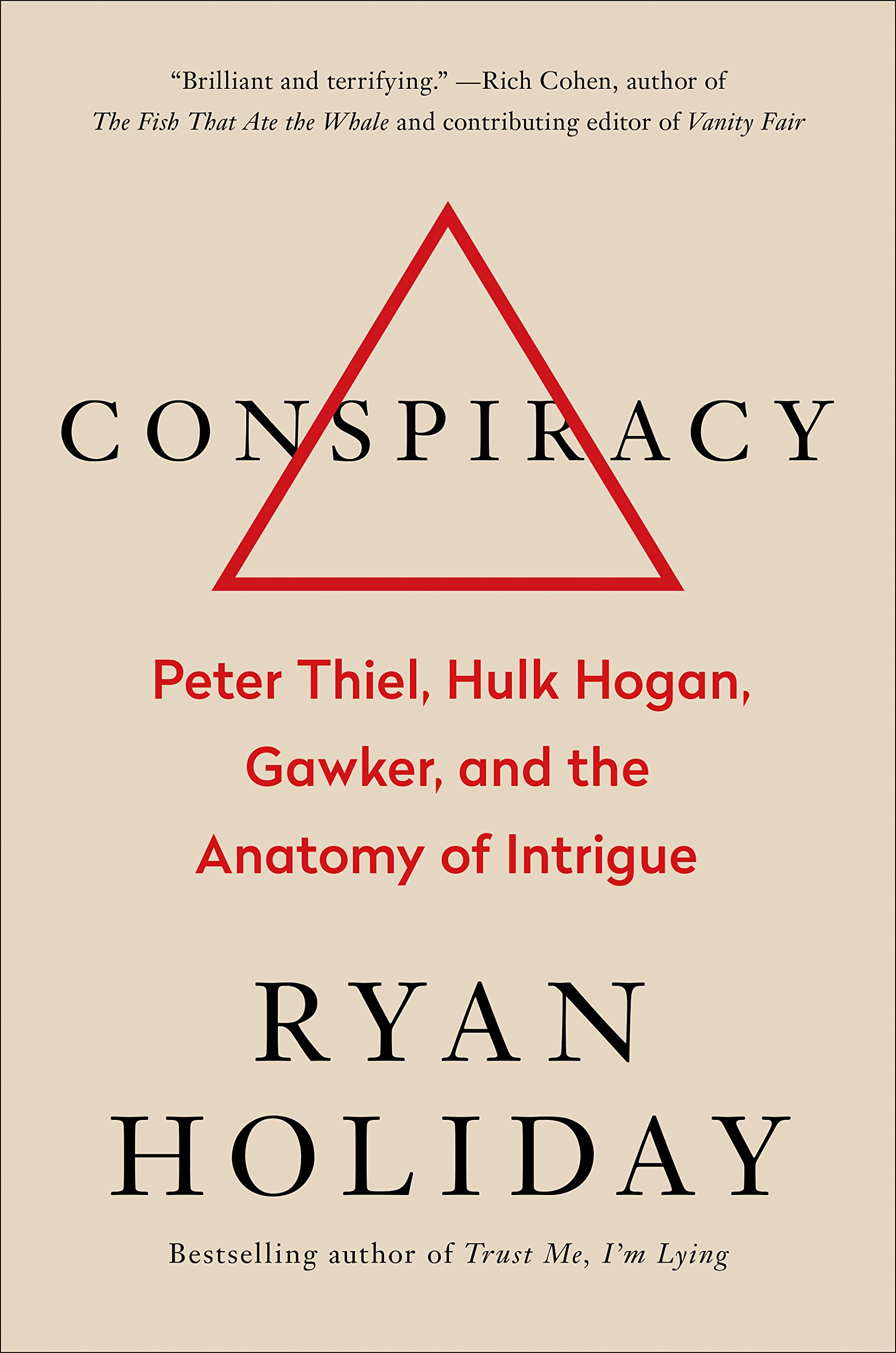 The story that I knew was that Thiel conspired against Nick Denton by funding the Hulk Hogan lawsuit in secret, which finally brought down the wretched hive of scum and villainy that was Gawker Media. So on the surface, Conspiracy looks like a book that really doesn’t need 300+ pages. And, truth be told, it could’ve been significantly shorter if Ryan Holiday didn’t try to throw Memorable Quotes™ in every. single. place. he could.

But what becomes clear after a while is that the simple story I knew depended on an array of people, places and stupid decisions. All of which could’ve collapsed a long, complex and actually pretty darn intriguing conspiracy that pitted a seemingly unmovable object (Gawker) against an unstoppable force (Thiel’s money).

In the left corner: Gawker, representing an absolutely reactionary and unflinchingly nihilist view of journalism. All that matters is clicks and any shred of decency, especially towards people with any kind of power, must die.

In the right corner: Peter Thiel, a relatively unknown libertarian tech billionaire back when Gawker outed him, was not just enraged by this personal hurt, did not only think Gawker represented a threat to society and privacy, but was also one of the few people rich enough that throwing millions around for a good cause represented chump change.

So what the book describes, mostly, is the surprisingly complex how of the conspiracy. Thiel, and the few people he paid indirectly to actually push this hidden agenda of his to legally end Gawker, ended up using whatever paper they could find to kill Gawker by a thousand paper cuts – from funding Gamergaters and contrarian media outlets to figuring out through expensive mock trials what kind of jury members would most hate Gawker. (Fat, middle-aged women, as it turned out, since they could sympathise the most with the physical shaming in the Hogan case.)

The final blow didn’t have to be Hogan’s case – it just so happened to be the kind of person who had lost pretty much everything he cared about and was ready to fight tooth and nail for revenge. Gawker never saw it coming. Even when they were facing a $100M death sentence, they insisted that they could wiggle their way out of it – like they had done in every lawsuit before – because they thought they had a fundamental, freezed peaches right to be awful. They could totally have frayed the bond that kept the conspirators together if only they had a shred of empathy and competency.

Unlike so many conspiracy stories, pretty much everyone involved in the story shared their point of view with Ryan Holiday, and nobody is spared of scathing criticism. And unlike many conspiracies that stay hidden, with this one it is glaringly obvious what unintended and ripple effects it has had. Thiel used a secret conspiracy to protect his and others’ privacy, but ended up famous and hated. Because of this lawsuit, Thiel realised just how much hatred and disillusionment was brooding among Gamergaters and Florida housewives against metropolitan folks like him, which led to his involved in the alt-right and the Trump campaign. On the positive side, because of this lawsuit and the Fappening (which was done partly by Gamergaters), the media in general slowly came to its senses and stopped the never-ending stream of raunchy upskirts and life-destroying leaks and reveals. Thiel’s original goal, to destroy Gawker and return to a less insane media landscape, was successful.

Essentially, Ryan argues that this one conspiracy has had a significant impact on the media landscape and even the political landscape. What he also openly discusses is whether this whole conspiracy was a good thing or not. Was it worth the trouble? But, more importantly to me, he ends the book by asking a question that I’ve been pondering about:

What would the world look like if more people conspired to change things they thought were immoral?

Obviously, the problem with Thiel was that he ended up playing the game almost as dirty as Gawker did – that he essentially singlehandedly assassinated a media entity. (He thought other outlets would cheer him on even if he’d reveal himself, not realising that Gawker now looked like the little guy crushed by the tech billionaire plutocrat.)

But setting that aside, I’m inclined to answer the question with “better”. I can’t find it right now, but there was a discussion on here about really long term goals, something in the order of decades. To pull a Ryan and quote out of thin air: "Given the same amount of intelligence, timidity will do a thousand times more damage than audacity.”

Perhaps it reflects a lack of faith in the regular, democratic means of trying to achieve Great Things, perhaps it is an echo of Ryan’s earlier (amazing) book Trust Me I’m Lying, but I am more and more convinced that a few well-placed strikes in a long-term and steady course might be a much more effective path to actually getting something done.

And this book feels like a testament to that idea.

I feel like you’ve been doing the things I’ve been intending but not doing. Reading books from my next-up list, first Deep Work, now Conspiracy, etc. reading them in a single sitting and then writing us a proper book report. #goals

I’m curious why Holliday wrote this book. Based on his reading newsletters, I would think he’d be writing a stoic quote book or a biography of Marcus Aurelius.

What is Holliday’s note keeping system?

To be honest, I had been thinking about doing something like this for quite a long time. But until now, I didn't feel like I had enough meat to write something interesting. Sebastian Junger once said that a writer's block in nonfiction isn't about not finding the right words, it's about not having the right ammunition to have some confidence in your writing. Having semidecent notes was the activation energy I needed to actually sit down and write something up.

I discussed the note system in here:

My current system is that I throw any notes into Google Keep with one of five labels: (Life) Advice, Book Notes, Interesting Thoughts, Recommendations, and Tracking (for specific info I want to track, like energy meter readings). Once a week I haul them over to a bigger file, grouping my book notes by book. I'm also thinking of adding a Diary label.

I’m curious why Holliday wrote this book. Based on his reading newsletters, I would think he’d be writing a stoic quote book or a biography of Marcus Aurelius.

I'm pretty sure he's also doing that. Part of why he wrote this book is because Thiel actually approached him for it. Part was because he realized early on that he had something uniquely intriguing thrown into his lap.

Ryan Holiday wrote Trust Me I'm Lying because he felt he had a real insight into the shitpile that had become the modern internet/traditional press PR cycle. Having done so, however, he had no clients and no money. Enter Tim Ferriss, who taught Ryan Holiday that there's money to be made in teaching young men to suck their own cocks.

So Ryan Holiday has made a little money with the whole daily stoic bullshit but chances are good he realized he didn't want to just be another weenie self-help guru. Back to his old stomping grounds.

I had pretty much made up my mind not to read this book because I've watched Holiday turn from "interesting" to "tedious" to "insufferable" over the space of three books. I might give him another shot, though. At least he's not writing about fucking McStoicism.

Interesting review. Thanks for writing it.

But, more importantly, he ends the book by asking a question that I’ve been pondering about:

What would the world look like if more people conspired to change things they thought were immoral?

"I’m inclined to answer the question with “better”.

What I like about that question is that it makes me think about the ways in which we might go about to change our world. Say you have a Big Goal; then the degree of secrecy by which you try to achieve that goal can run from 'none (e.g. by writing a book or through democratic processes)' to 'full-fledged secret conspiracy'. It's a spectrum, I think. Lobbying by big corporations for example is closer in my opinion to conspiracy than to an open democracy.

It also makes me wonder what kind of goals necessitate secrecy, if at all? Thiel considered buying and then smothering Gawker. But he also knew that wouldn't solve the long-term issue, that it wouldn't send the message of decency that he wanted all media to honor. Someone else would simply pick up the ashes.

Yeah. It's a really interesting question, isn't it? On the one hand, I think conspire or not, secret or not, that if people strive for betterment, more often than not that'll be the end result. Provided they do it with care and conviction.

Like I said, I don't think I've ever heard the word "conspired" in reference to this kind of question, usually because "conspiracy" tends to have a nefarious connotation.