The fall little league season recently wrapped up with a scrimmage between the boys and the coaches. As my injuries heal, I reflected on the differences between our experiences with baseball and soccer.

The spring baseball season started with tryouts. I had to find the kid’s passport and print out an electricity bill to get through the identity check. The skills test was in a gymnasium with curtained windows; parents were not allowed to watch. At stake was draft placement into a single-A, double-A, or (just maybe) AAA team. The kid thought he did pretty well, but we would have to monitor the web site for weeks before finding that he would start on a single-A team. (In dugout conversation coaches would intimate that inexperience was a deciding factor.)

While we waited for the regular season to start, we shopped for gear. Dick’s Sporting Goods had a sale benefiting the local league, and we made the mistake of bringing our shopping list that day. The baseball section was worse than the school supplies aisle of a Target in September. We managed to get a glove and hat and pants and batting helmet, but they were out of belts. We bought batting gloves and sunglasses online. We reused the “peepee protector” and cleats from soccer.

The bat was another story. The league provided an exhaustive list of bats approved for the current season. However:

Please note that as of January 1, 2018, the new USA Baseball Bat Standard will be implemented. Little League-approved baseball bats that are approved for use for the 2017 season will no longer be acceptable for use in any Little League game or activity starting on January 1, 2018.

Opening Day included a parade through town ending at the nice artificial turf field. As each team was announced, they ran onto the field carrying a sponsor banner (about $300 to sponsor a team, getting your business name on the back of the jersey). There was an anthem, a speech, a prayer, and a number of opening pitches. I saw a kid spit on the ground for the first time since I was a kid. It all took about as long as a typical baseball game.

The soccer season started with a regular practice. We bought a size 3 ball, cleats, cup, and shin guards.

The baseball coach and players’ fathers tend to wear ball caps and t-shirts decorated with military affiliations, the shirts sometimes covering a bit of belly (though one father had completed a half Ironman and another is qualified for next year’s Boston marathon). Plastic sunglasses were a standard part of the comfortably shabby dress code. All were unfailingly kind and polite, except for the occasional snap at their own kids and salty language when the kids were out of earshot.

The soccer coach is an executive at a data center in Iceland and commutes weekly to Europe. He would sometimes warn that he might be late for practice if his flight from Germany is delayed. He admitted to running marathons when asked. I accidentally learned that he speaks Spanish after sending a photo of my kid playing portero on a Playa del Carmen beach. He responded en español, mentioning that his family was leaving the Riviera Maya the same day.

The assistant soccer coach is a former senior director for Middle East affairs at the U.S. National Security Council. We bumped into him and his kid at a local 10K.

I got suckered into assisting with coaching in both sports. My sporting career petered out after tee-ball and peewee soccer, so I felt completely unqualified. But like most things, enthusiasm and faking your way through get you about 95% there.

For baseball, preparation amounted to adjusting the fit of my “COACH” hat. No one suggested perusing the rules, which are a local adaptation of a little league rulebook, and changed significantly on promotion from single-A to double-A. After a game was decided on a disputed final score, I was drafted as scorekeeper. The GameChanger app made this mostly easy, but I needed a separate paper pad to keep track of pitches. The league is fanatical about protecting kids’ throwing arms, with limits on pitches per inning and per game. The only other strict safety practice was reminding kids not to wander around the dugout swinging a bat. During a game a second baseman got bonked on the head by a thrown ball and was stretched out flat on the ground for a minute. A mom’s attention and an ice pack were the remedy.

For soccer, I had to sit through an hour of online safety training and sign certifications before I could be allowed to set up cones for drills. A soccer ball is larger than a kid’s head and softer than a baseball, but head injury still gets top concern. The rules are similar to the major leagues, except heading is prohibited, and any player that has incidental head contact must be taken out of play and interviewed for any signs of brain injury. The training urged caution and gave tips on overruling parental objections to taking an apparently uninjured player off the field just to be safe.

The baseball coach emphasized results over techniques. He wanted the kids to “get as many touches as possible” and figure out their own style. When pitching, he seemed to have slow-motion vision and could suggest corrections to a batter’s foot placement, grip, and eye focus, while I struggled to call balls or strikes.

The soccer coach emphasized skills. An e-mail before practice might include specific targets and a program. 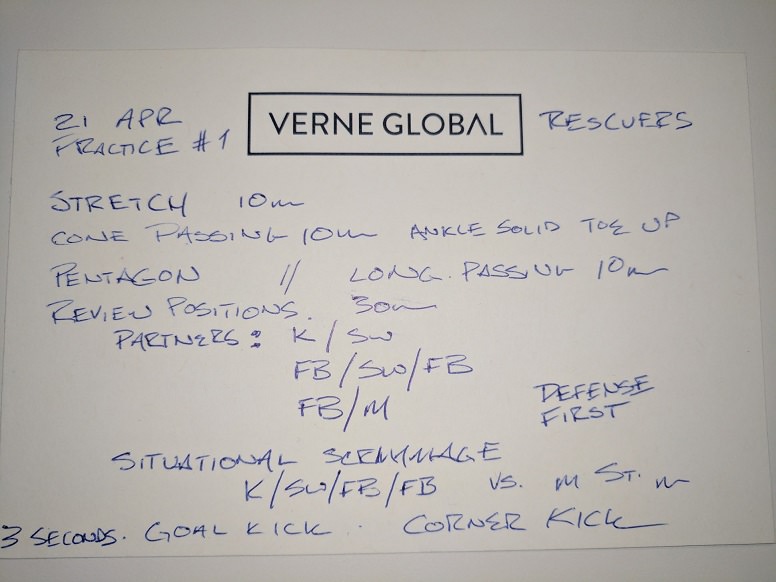 At games, the kids carefully kept score and the adults pretended not to, but at baseball games parents often asked for scorekeeper numbers. There were tournaments which included all the teams and designated a champion.

There was a little bit of the “everyone’s a winner” philosophy, with the coaches handing out trophies or medals after the last game, but no one tried to obscure the fact that we did not win any tournaments. No MVPs were named, though the star of the soccer team was captain.

I have long enjoyed playing casual soccer and the low-level commitment of watching the World Cup. Baseball seemed intolerably slow, fastidious, and dull. Little league baseball has made me come around, a bit. Baseball on on TV is still slow-paced, but watching with a fan lets you fill in the lulls. And playing ball is a little bit magical. The spring and fall seasons overlap the only really pleasant weather we get in the mid-Atlantic. I got myself a beat-up old glove on eBay, and it’s one of those extensions of the human body, like a bicycle or hammer, that seem to give you superhuman power without feeling unnatural. There’s a sound a hardball makes — smacking into the pocket, the glove emitting a cloud of brown dust backlit by the setting sun on a cool fall evening — somehow that sound is right and good and true, and perhaps merits the anthem and parade and prayer.

This is beautifully written. And such a well-crafted redemptive ending:

I got myself a beat-up old glove on eBay, and it’s one of those extensions of the human body, like a bicycle or hammer, that seem to give you superhuman power without feeling unnatural. There’s a sound a hardball makes — smacking into the pocket, the glove emitting a cloud of brown dust backlit by the setting sun on a cool fall evening — somehow that sound is right and good and true, and perhaps merits the anthem and parade and prayer.

Thanks, lil, glad you enjoyed it!

I enjoyed it so much, I spent a few minutes googling "little league magazine submissions" -- but then I suspected that publishing such a fine essay on hubski was also pretty good. I publish stuff here and nowhere else. It's here if I need it.

but one kind of wants the good stuff to get out there. I'll pm you my one-woman-show if I haven't already. It might make you giggle.

I saw a still photo somewhere, but didn't know there is video; please do send the link.