Over some years of volunteer work in the therapeutic field there's a lot of spiritual underpinnings in the work done by a good bit of those well into recovery. Facilitators have a tendency to allude to peoples' 'higher power' "What ever that may be: God, yourself, the universe." when speaking to volunteers in order to ensure they're channeling some form of compassion for the sake students in the workshop.

This idea of your Self as a higher power's grabbed at me. Perhaps, this 'Self' is what religious folk turn to when they seek out God?

Humans are experiential creatures. In our current state, we've no point of reference for any archetypal Godly figure other than text (today with bibles) or animism (older religions). To fill in the gaps, reliance on memories or imagination based on our own life experience and project it unto this idea of "God". In other words, this God figure, being a manifestation borne of our own experiences is, boiled down to it, ourselves.

Just throwing mud at the wall. I welcome thoughts, experiences, critiques or other.

As a side, I like to think of this from AtLA when I think about the theory... 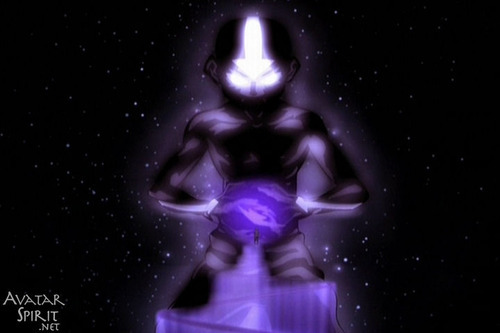 This is actually something I've been really pondering for a few months now. I've been getting away Christianity, the religion I was raised in (this makes me sad, but I can't arbitrarily choose to believe in something, even if others seem to be able to).

There is something that religious people feel as God. I've felt it, and I didn't imagine it. The feeling, whatever it is, is real. I've recently gotten into more Eastern type stuff, and I felt that feeling again. But this time, the book I was reading described it as my higher self, or as simply "being". And this time I could realize that there was an element of me in the feeling, but it felt somehow greater and more permanent than me at the same time. To reach that place, find a way to quiet your thoughts, images, emotions, and general mental noise to a point where you can see what lies underneath it, and you'll see that there is a stillness there, a peaceful awareness, that is you, that is like the sky into which the clouds of your thoughts are placed. If you can connect with this part of you, you'll notice love, joy, and peace emanating from it. The importance of your day-to-day worries will start to diminish. And you'll feel connected with something more permanent, more eternal, than the "I" that your mind builds out of the narrative of thoughts and feelings you generate.

There is a concept in some Eastern circles called "non-dualism", which is basically the concept that the "self" is not a separate entity from the rest of the universe. That the universe is really one entity, and "our" personal boundaries are completely arbitrary. This leads to really strange quotes from non-dualist thinkers:

So that's another way of looking at connecting with your "higher self".

I'm familiar with this route via friends (not subscribing to stock religion) describing awareness of this higher self you speak of. A model of therapy that I've cultured an affinity for is the Internal Family Systems model where all but the "Self" are the thoughts or clouds manifest in personas of the mind developed in ones life.

Too, by way of your sky metaphor, I can't help but think of older Mongolian theology of the Great Blue Sky, and I love how you tie in the sky itself were "You" emanate from - more so, how it intentionally or not relates so well. Of course, my interpretation of this all is rooted in speculation rather than experience, but I really appreciate your POV here.

It's not non-dualistic, but I read this over in r/bahaiquotes the other day and both quotes seem to touch on a somewhat similar theme, though from different angles . . .

"Look not upon the creatures of God except with the eye of kindliness and of mercy, for Our loving providence hath pervaded all created things, and Our grace encompassed the earth and the heavens."

-Gleanings from the Writings of Baha'u'llah

I guess this here is why religion is so baffling to me, and atheism fits me so perfectly.

I don't see these "gaps" into which I need to fit some sort of mystical functionary. The world, universe, whatever, seems like it forms from a couple of relatively simple principles, and I don't see leaps or gaps in the narrative that require me to make up something that isn't there.

It is thought-provoking. I hadn't considered that other people see inexplicable gaps within the narrative, and are simply trying to connect the dots with whatever they can think up. It's not something I need to do, but it makes sense....

I expect everyone would probably identify themselves as a "rational" person.

As far as "connecting the dots easily", I do see patterns. Everything fits into a pattern, and those patterns repeat throughout the world on both a macro level, and a micro level. As I have gotten older I see these patterns more easily, because I have experienced them more. So yes, I believe I do connect the dots easily.

I don't see these "gaps" into which I need to fit some sort of mystical functionary.

I expect everyone would probably identify themselves as a "rational" person.

I think it's safe to say, and you'd probably agree, that people seeing themselves as rational do not see themselves as "filling in the gaps." Our beliefs or lack there of is just how we see the world around us. That's not to say that their aren't gaps and that we actively try to fill them, but I think the gaps that we're trying to fill are our longings for happiness, belonging, and purpose. Obviously, how we view the world has a strong influence on how we go about filling in those very real, very important gaps.

Well, it was kantos original post that established the idea of "gaps" in my head. So what I read him as saying is that there are worldviews that require leaps of logic - Noah's Ark, for example - that provides a very real "gap" between the average everyday experience of humans in the world, and a world in which penguins walk from Antarctica, through Africa, and get on a boat, and that's why they exist today.

A logical person is welcome to believe whatever they want, but at some point logic is going to dictate things happened one way, while their belief dictates they believe things happened a different way. This is the "gap" that I believe kantos was referring to in the initial post. At least, that's how I interpreted it.

And that's why I commented. This "gap" idea was a new way for me to consider how others view the world, and how they come to insert magical thinking into the gaps in their particular worldview and narrative.

Religious people aren't dumb or ignorant of the facts, or whatever. They aren't idiots with blinders on. (Generally speaking.) Religious people just have a particular worldview, and it requires more machinery than my worldview. They fill the "gaps" they see with gods, miracles, whatever.

I, having a different worldview, don't see the gaps they see, and therefore have no need for those other bits of machinery.

Neither is right or wrong. It's just sort of a mechanistic explanation for a different set of perspectives.

Did I explain that clearly, or completely muck it up?

I don't think you mucked it up in the slightest. I think for the most part, we're in complete agreement. :)

That's not to say that their aren't gaps and that we actively try to fill them, but I think the gaps that we're trying to fill are our longings for happiness, belonging, and purpose. Obviously, how we view the world has a strong influence on how we go about filling in those very real, very important gaps.

While this is perfectly stated on what my own thoughts started out as with regards to these "gaps" (for some reason I couldn't put into words), your POV, goobster, of these gaps expand upon and enrich the theory by extending to the appeal to logos here:

A logical person is welcome to believe whatever they want, but at some point logic is going to dictate things happened one way, while their belief dictates they believe things happened a different way. This is the "gap" that I believe kantos was referring to in the initial post. At least, that's how I interpreted it.

If anything, I'm voicing my agreement with rd: very well stated and just as relevant. Appreciate y'all's contributions.

Geez... I love Hubski... a place on the internet where we can have a polite discussion on differing religious beliefs. Amazing...

In our current state, we've no point of reference for any archetypal Godly figure other than text (today with bibles) or animism (older religions)

In fact, we don't have any but ourselves: we've met no creature as sapient as ourselves; perhaps, only yet. This would be the only reason it's said in the Bible that God created humans in his own image: we have no other image to turn to.

Exactly my point. For so many reasons, I'm inclined to reverse the phrase to humans created God in their own image, instead. There are so many allusions to such with the Creation of Adam, Greco-Roman Pantheon, and Hindu deities. The only model for a God figure we have here are ourselves. As a side note, it makes for interesting thoughts when one speaks of "playing God" when we're the ones that made Him.

Stephen Fry, when asked about religion, would generally reply that he doesn't believe in God or gods, but he finds certain fondness of the Greek gods - or, "the capricious gods", as he refers to them. He sees their humanity as a good expression of the human nature that they truly possess through their creators.

It's a powerful idea, too: that we create gods.