New York’s zoning code was the first in the country, meant to promote a healthier city, which was then filling with filthy tenements and office towers. Since it was approved in 1916, the ever-evolving, byzantine code has changed many times to suit the needs of a swollen metropolis. Just in March, the administration of Mayor Bill de Blasio won approval for a vast citywide plan that would encourage sleeker, more affordable developments.

Yet many of New York’s buildings remain stuck in the past.

“To understand zoning, you have to have a law degree, it’s so convoluted and so dense,” Mike Ernst, director of planning at the civic group, said. “The whole process of how buildings get built these days is so confusing and opaque to people. There really should be more transparency, so people can have an understanding of what the future holds for their city.”

Hey, chucklefuck: did you miss this part?

Take 720 Park Avenue, a Rosario Candela classic from 1928 that rises 17 stories and has only 29 units — one of which, a 7,000-square-foot duplex, recently came on the market for $22.5 million. All that grandiosity is too much for modern zoning, which now constrains such boxy, bulky buildings in this part of town.

So. You... wanna see what the New York of unconstrained $22m penthouses looks like?

Here's where you get to live.

Were 19 Jones built today, it would have to be significantly smaller. The number of apartments would fall sharply, to just eight from 24. The building’s total dimensions would be nearly halved, and a story or two would have to be chopped off.

Anybody else study Old Law Tenements in AP US History? Anyone? Anyone? Bueller? 'cuz this shit will sear itself into your memory forever: Keep in mind: Old Law Tenements were an improvement to knock the immigrant living conditions down to "1984 bad" from "Soylent Green bad." 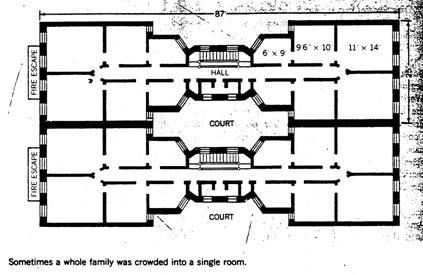 You like that 6x9 room in there? You'll be interested to know that if you go to federal prison they'll give you 7x10 in solitary. Of course, you won't have that spectacular view.

Building codes are supposed to change. They're supposed to adapt to the conditions people live in every day. There were under a million people in NYC in 1870. There's 8.4 million now. A lot of that is because nobody has to live in dumbbell tenements. A lot of that is to keep the dystopia at bay. Because contrary to free market idealists, most people would rather live here:

Doesn't even mention the actual reason, the ADA. Saw an article a while back suggesting that we all think Victorian-era houses, or knockoffs at least, are really cool -- so supply and demand would suggest more will get built. Except they don't, because they're all illegal.