Thanks to Odder, all good info.

Yes, we believe that Lorentz invariance holds to about 1 part in 10^17, and even then, we're (probably) measuring the limits of the experimental setup; our technological abilities. That is to say, Einstein's theories of relativity (both special and general), have never been violated, to the best of humans' ability to measure such a thing.

There is, in fact, a theoretical particle that moves backwards in time, called a tachyon, but if they do exist, there is no known interaction with us, or any baryonic matter, for that.. err, matter. Here's a classic joke among particle physicists: 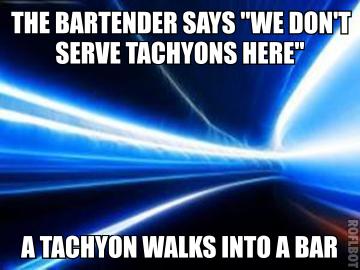 If you are an educated physicist please turn OFF everything you have learned just for a minute, and just let your mind wander a bit into the unknown.

I'm afraid I can't do that, Dave. This is in the realm of known physics.

You are correct in thinking that a grand unifying theory of physics may require reformulating everything that we know in a completely novel set of axioms. String theory is one attempt at this, though it doesn't make testable predictions that would reveal its superiority over existing theories. And I'm personally under the impression that there will never be another singular person (another "Einstein") capable of bestowing us with a grand unifying theory; it will probably require teams of people working iteratively over several generations. Things have just gotten too damn complicated. But I hope I'm wrong.

It's healthy to muse on things like this, though, I don't want to discourage that. I can guarantee that I would look like Hubski's ultimate fool if I were start bumbling on about economics, poetry, politics, or anything that isn't physics. Apparently, to become an educated physicist these days, it requires hardly knowing anything else, at least until you get the PhD. And I've already cried about it, my tear ducts are drier than the Sahara, at this point.

I'm afraid I can't do that, Dave. This is in the realm of known physics.

Speaking in psychological sense (nothing to do with physics) we know that we "do not know" but, we do not know how to look for that unknown or usually we are very bad at it. Most of the time way how we look for the things can be compared with brutal force method in computing.

Psychologically if we say that something is impossible, we are shutting down our brains to look for solutions, we are saying this is it, this is all we can ever hope for. Every time we say it is "impossible", "it will never work", "there is no point" those cage bars become a bit bigger and stronger.

Do not get me wrong, I just like more when people intelligently try and failed thousand times trying to do something new, than when they give up at the beginning or just hold dearly to one standard already known thing.

I was actually taking a special relativity class when the faster-than-light neutrino thing happened. Class the next day was a bit awkward, but the professor assured us the experiment was as instrumentation error, and he was right, of course.

1. To arrive at point B after -1 sec or backward in time? or

2. To arrive at point B after 0.999 sec from the time he started his journey?

An insane consequence of the theory of relativity is that for assuming you observe 2, there must be a reference frame in which someone else, moving at a constant speed relative to you, observes 1(or something very close). Weird, huh? The fact that you can't move faster than light as a consequence of special relativity is more a demand that effects follow causes. That's probably what the news articles are referencing when they say a particle moving faster than light would need to move backward in time, whether the authors of those news article know it or not. The "relative" in relativity is that time, distance and even simultaneity are all relative, that they depend on your velocity, or, more naturally, your velocity as a fraction of the speed of light. The math behind this is called a Lorentz transformation, and it tells you what an observer who is travelling at a constant velocity relative to you sees. Also, this wiki page explains how both 1 and 2 manifest pretty well.

A few years ago I went to a talk given by Miguel Alcubierre (brag), and someone asked him what he thought about the paradoxes that would be caused by violating causality if his device really were to be built. He kinda just shrugged and said "I guess we'll see what happens" or something like that. It's kind of unknown what would happen even to the experts, and other weird things that happen if something goes faster than the speed of light, too, like space looking like time and time looking like space.

that would pretty much mean that we are stuck in our solar system until the Sun burns up, or until some cosmic explosion wipes us all out.

That isn't necessarily true. DARPA is funding a project to figure out if interstellar travel is feasible and I doubt that they're assuming a method that involves faster-than-light travel. A common idea I've heard proposed in generation ships, ships large enough to support several generations of humans who would go on to colonize a new planet, but that's obviously at least several hundred years away.

that would pretty much mean that we are stuck in our solar system until the Sun burns up, or until some cosmic explosion wipes us all out.

Not exactly. A ship capable of a constant 1 g acceleration could visit almost anywhere in the galaxy within a single lifetime of the crew. But they could not come home, since time for the folks back home would pass much more quickly, so says time dilation anyway.

Well, they could come home, but everyone they would have ever known would be long dead. And building a ship capable of a constant 1g acceleration is... nontrivial. Also, collisions with even minor space junk would be catastrophic.

Mathematically, it is possible, though.

You should thank me for this I just spent 20 min looking for this video :)

So yes I know that, and let say that geneticist improve your life span and you live up to 1000 years, and that EM Drive works, that fusion energy would power our ship and we have enough fuel to travel. That again gives you just about 500 light-years in the life time if we ever achieve 50% of the speed. Our Milky Way Galaxy has size of a 100,000 light years.

So let say after 500 years of traveling you decide to send a message to the mother Earth, you will not get answer until you die.

And surely I am not interested in way of traveling where our genes will be stacked onto starship with AI that will resurrect us there, with only justifiable reason being civilization backup, or life preservation. But speaking in the terms of your mind and consciousness, you would be still in the cage of one to few solar systems. We will not be able to even communicate with each others, sharing good or bad things across the universe. Again above mentioned AI is maybe our future, maybe it is a logical evolution step in consciousness. It could be unimaginable smarter and intelligent, it could live millions of years, self repairing and replicating itself, so time would not represent a big obstacle for it.

But real point of that article is not discussion of the physics but more psychology of new inventions, and actually attitude we have about old knowledge and willingness to find a way out of the box.

We have put aside a powerful tool of our brain -- imagination and intuition, that can actually help us find solutions for many issues we are facing now and we will face in future.

I had U turn long ago and went from physics to informatics, engineering and psychology (in free time) instead.

For me one notion was initial spark to write that post a idea that even when something outside happens we tend to be biased and apply same formulas, that obviously do not work for that particular case. In order to discover new things it is absolute requirement to look outside of the box. (all this is more psychology than physics really)

In my mind time is not a dimension but more relation between objects, whatever happen it will always go forward. (again this is speculation, as reality always has ways to surprise us).

Therefore, Alcubierre drive in my mind at least is just bridging the gap between two point of space. And while doing that -- time will still tick. Basically it will never catch its own copy from other time. So, someone may ask but what will happen with the light bouncing while it is still travelling, well again speculation, maybe nothing as it will not “react” with it in Star Trek subspace like manner.

And, although light bouncing of the original ship that has not started his journey, or the "shadow" from the ship, may arrive from the starting point in 2 yeas after ship has arrived, still does not violate anything.

Because ship would arrive just always one step in future, one millisecond, one second, but it would never go back ...

Again as I said before first I would need to find negative mass build experimental setup and prove it :) otherwise it is just speculation.