The random journal I picked was from 2011 - a very bad year, My daughter was having a long breakdown caused by taking bad birth control pills (look up "Yaz side effects" or Yaz lawsuits").

I was writing in my journal about how I met her father when I was doing a lot of campus radio work years earlier:

After interviewing all the artists, one - who I had not particularly cast my eye upon - sat next to me in the student pub. He put me in the full force of his gaze and said, "You need some passion in your life." It was 1982. I was 30.

And the truth of that statement was so painful that I married him.

Midway through another marriage, I am that person again, 30 years later, vulnerable to meeting another speaker of that line.

This journal also contains this dream:

I dreamed I gave birth to a baby, but due to some space interference, it turned out to be an alien baby. It had shiny large alien eyes and looked podlike. It's mouth seemed to be a screen. I wrapped it in a blanket and was trying to nurse it. I was worried about its intake and output, but eventually I noticed a wet spot on the blanket and was relieved.

It began copying messages from t-shirts and reprinting them on its screen.

It was very smart, but didn't seem gendered.

At one day of age, it was reading and writing.

I left it somewhere, but when I realized that it wasn't with me, I wasn't worried because it couldn't walk yet. I figured it wouldn't move.

I was right and I found it where I left it.

I was proudly carrying it around.

I loved my alien baby.

Dudes, pull out an old journal - copy me something. _refugee_

My only journal is from when I was 14. I am sure that it will be painful.

I'll root it out, but it might take a day or two.

Most of my old journals are not with me right now, and most of the photos I have from old entries in them are demonstrations of bad times. But there are 2 old journals I keep where I'm living all the time, so I went to my most recent old journal (I stopped journalling, pretty much - sometimes I check in) and found you two interesting moments.

Since my handwriting's legible enough I like to present images. 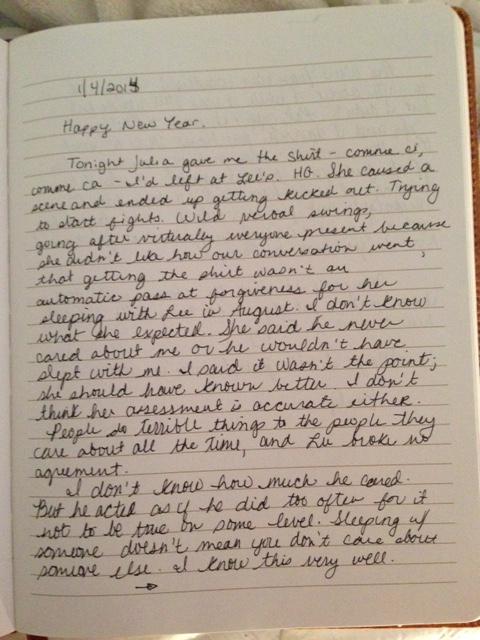 The two entries are nearly exactly a year apart. 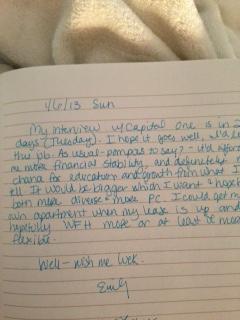 my situation is the same as mk's. all my journals are at home and the last time i wrote in them was when i was 15 or 16 and i only wrote in them when i was very depressed so it would be all teen angst. there might be some insight into being in an abusive relationship but i don't remember there being anything interesting last time i pored over it

ahhh...one gets into a habit of journalling -- I know there are others here who journal, but I'm forgetting who. wasoxygen has sent me pages from his journals - they seem to be mostly science though.

Now people write in so many ways and Big Data has it all.

I got into it because of my grandma. She writes in her journal every night and has been for I don't even know how long.