With excess money comes some luxuries. Some of those luxuries can't be bought, but others can be. Some of those luxuries turn to vices and are way more common than others. One of those vices is alcohol. Now if you were stalking Chatski a few weeks ago, you'd have watched kleinbl00 and I among others discussing the beauty of various gins. During this conversation, kb spoke very highly of Scratch Distillery's Barrel-Aged Gin. So he and I were talking, and then offered to send me some. And I stupidly said nah figuring I'd try to find some around me. Then I looked around me, realized that that's impossible to get outside of a small area, changed my mind, and said yeah. So then a few weeks later, a box appeared at my doorstep. And I opened the box. And the contents were revealed: Like damn man, not just one but two bottles. Not just gin but watches that cost tens to hundreds of thousands of dollars. And of course a beautifully branded tote with three bottle spots.

So here's what I did: So this was what I was expecting and incredibly excited for. I didn't start drinking until I was 21 thanks to being an RA in college and needing the free room and board. When I started it was wine and beer, easy shit. Then Christmas 2019 happened and I got a bit of extra cash, and I hung out with some friends for a New Year's Eve party during which one of them made cocktails that were divine. And I realized I always enjoyed cooking and baking, so cocktails seemed like a logical next step. So in my early cocktail exploration days, I discovered I love gin. Like this isn't some casual enjoyment. I have 5 gins in my apartment right now. I was talking to my dad at one point about all this and mid-pandemic we managed a gin tasting with stuff we got from liquor stores around (consensus was Malfy Italian Original gin was #1). So needless to say getting some fancy hard-to-get hipster gin which I would otherwise have no way to get was exciting for me. The gin smells like a wonderful combination of lemon, juniper, and cinnamon. The taste starts with lemon and vanilla and ends on orange creamcicle. I've shared it with a few people thus far and it's got stellar reviews, of which they're very much so earned. The gin is so complex and smooth. Kb said it's the only gin he can drink neat and it's easy to see why. I have not made cocktails with it and likely won't. If I do it'd have to be something that allows the gin to come through well. There's a real chance I never get a bottle of that again, so I'm trying to savor every bit of it. Full 8/8 circledots for the gin.

Now to aquavit. My innocent little mind was unaware aquavit existed. I had absolutely no idea what to expect. This is the exact aquavit I got. Of course I researched before just diving right in. And the internet shows it's some fancy Nordic thing with caraway. I am a person who dislikes caraway in rye bread, so I was very interested in what this would bring. Like caraway as a flavor is fine, but when you bite into that seed, it throws off way too much flavor. Sidenote here on rye bread -- I just did homemade corned beef for some lovely Rubens. Couldn't find good fresh rye bread and it was awful. Might have to try making my own #breadwatch. The corned beef and Ruben were awesome tho. Back to the story. So I opened up the bottle and my first thought was rye bread. Not caraway. Not dill. Full on rye bread. Association is a fun thing. So I took the first sip, and it was full caraway and rye bread. The slightest hint of dill came through at the very end, but the caraway lingered stronger than everything else. I like it, but I'm not sure what to do with it. I will likely keep having and sharing it neat with others. Caraway is a complex flavor I have no idea what flavors would go well with it, nor what cocktails to make. Scratch Distillery's website has cocktail recipes and I might try one of those eventually. Aquavit has got good reviews by those I've shared it with, but the gin has been rated higher by all. Super interesting flavor and not a beverage I knew existed, overall a solid 7/8 circledots.

Also I can't finish this all off without some comment on the watches. There's exercise in excess. There's really not much I can say beyond "why" and "engineering is cool" and "art", but I want to bring this to everyone's attention:

2) I suspect johan and mike have forgotten more about akvavit than I'll ever know but your best move is to throw that sucker in the freezer. It pairs quite nicely with smoked salmon, capers, dill, rondele and crackers. I wouldn't say it's "some fancy Nordic thing" I would say it's the Scandinavians figuring out that neutral spirits are boring. Scandanavia? Caraway. England/Holland? Juniper berries. Italy? Anise (and sugar - so much sugar). Russia? Drinkyerselfblind. It may not be your thing - you'll never convince me Campari is a good idea no matter what you mix it with. I'd say pass it along to someone who will love it but unless there's a healthy Scandinavian community around you, you won't find that person. Me? I'd been forced to eat lutefisk within two years of moving out of New Mexico.

3) Seahawk reciprocated nicely with a box that is currently under the tree because of course it is.

4) Christophe Claret is a joke and is in the box because it fit. And now, for no reason, the exact moment that fidget spinners became uncool, 5:45PM GMT Nov 20 2017:

On point 2, I like it a lot it's just very different. I'm used to sweet, citrus, and spices in liquors, not caraway. I'll definitely try freezing some. Those I've shared it with have all felt the same. Good, but very different and unique.

As kleinbl00 said, akvavit is best served ice cold. These days it's usually served at christmas, easter and midsummer, paired with different kinds of pickled herring, where it acts as a palette cleanser.

You can give us herring

And you can give us sill

But you will still be erring

Unless you also will

Give us a glass of Akvavit

That sure smells sweet

To Swedes in heat

It gives the fish its feet

It makes the dish complete

Well I don't have herring, but the aquavit is in the freezer and I'll have a lovely Christmas glass tonight.

I bought a 50ml bottle of Campari one fine September day. I tried some.

Some people like dandelion wine. I'm not sure why. I suspect they're the same people who like Campari. I know beyond a reasonable doubt that I am not one of those people, have never been, will never be. 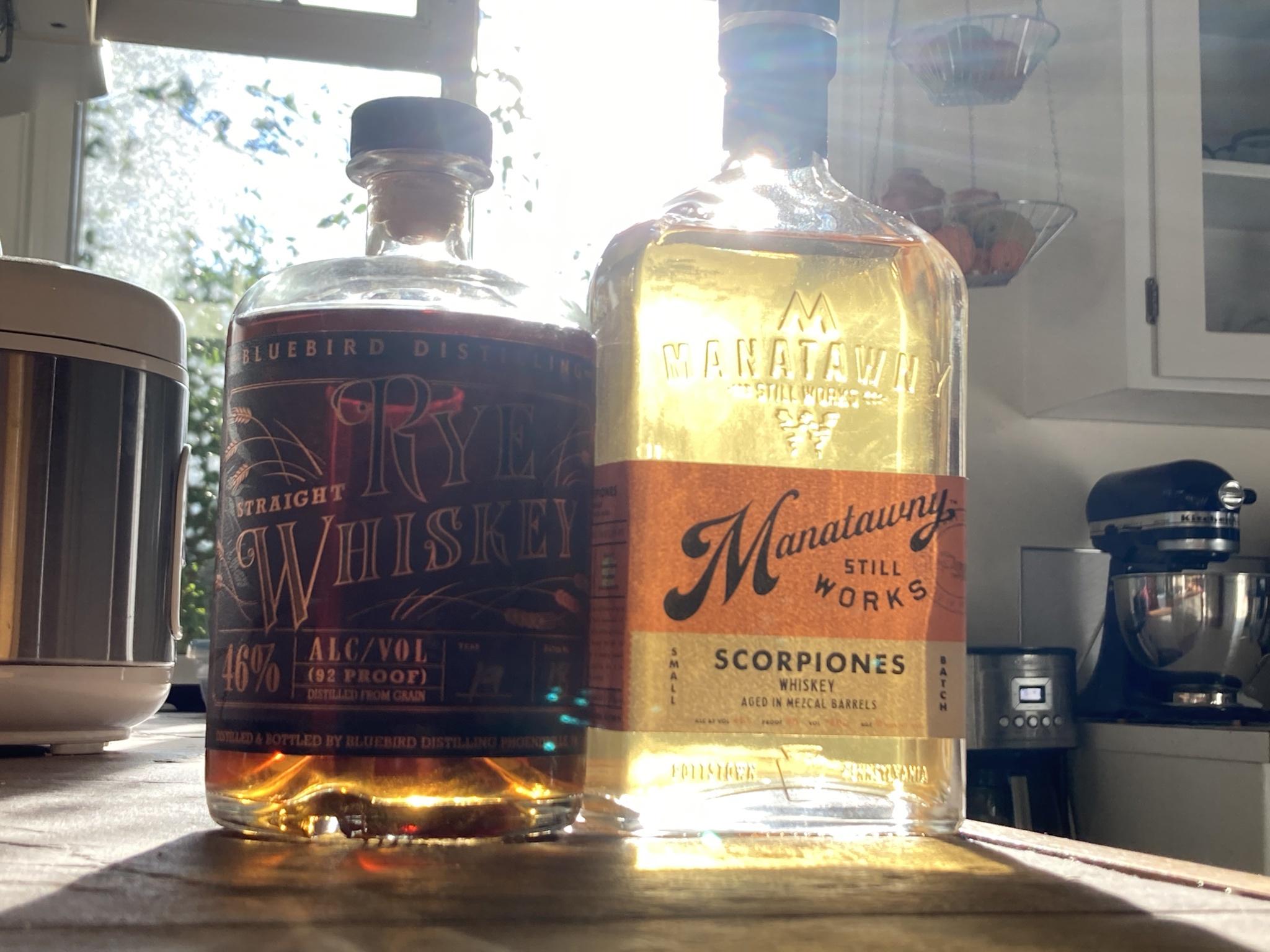 So Seahawk didn't know this about me, but I'm a bourbon man. Through and through. 'tis my alpha and omega which makes it rather trying that my hard-earned booze dollars go to support a bunch of dumb shit hicks that keep voting Mitch Fucking McConnell into office.

I'd been willing to accept that there were people in Kentucky who weren't assholes for most of my life but the past four years have cemented my deep and abiding hatred of Kentucky, all things from Kentucky and all people who will attempt to say nice things about Kentucky because honestly? fuck you. This shit isn't funny anymore. I grew up avoiding German-Anything because of Hitler so my 3 1/2-year-and-counting boycott of bourbon was second nature. But Bushmill's isn't great. Canadians are weak. And the local whiskeys are... okay? But you can pretty much tell that they're Seagram's passed through a barrel out of some dumb shit Woodinville winery to say they did. They aren't great.

I am not a great connoisseur of booze. I tend to drink what's good and easy. Of course, I discovered that most people don't know how to complete the phrase "Highland, Lowland, Islay, ________" so there's booze snobs and booze snobs, I guess. Either way, I was unaware and uninterested in the microdistilleries of the Keystone State up to this point but a couple drams have made me an enthusiast.

Manatawny Still Works has booze they age in Mezcal barrels. this is a good idea. It makes "bourbon" (again, fuck you, Kentucky) that has a mezcal fire and it is yummy. I'm not a "tastes of roasting tires and a slightly cloying shrimp cocktail" kind of booze writer so I will simply say that when a bunch of talented dudes decide that they should make bourbon that tastes vaguely of mezcal you should give it a try. They're onto something.

As you might expect, an outfit going by "bluebird distilling" doesn't make a pretentious product. It's just delicious. Rye is good. I like rye. The microdistillery rye around here (lookin' at you, Crater Lake) tastes like Seagram's. This stuff tastes like rye, if you wanted to make a rye that had enough flavor to offend Canadians. I like flavor.

I intend to entice young Seahawk to violate interstate liquor laws further in the future.