In addition to Leonhardt we've got some Krugman, a link to some Larry Summers, a little Bernanke-Summers blow-by-blow... all of which were linked in this morning's opinion newsletter.

There's some nice graphs'n'shit though which sort of give lie to the nice tidy friendly non-threatening title "secular stagnation." it's from the same place that calls "you're getting 70 cents on the dollar on your retirement fund" a "30% haircut." So when you read this shit, keep your eye on the ball:

There are two main culprits. The first is a savings glut. Americans are saving more and spending less partly because the rich now take home so much of the economy’s income — and the rich don’t spend as large a share of their income as the poor and middle class. The aging of society plays a role too, because people are saving for retirement.

What an extremely sanitary way of pointing out that the 1% has all your money! But wait there's more!

The second big cause is an investment slump. Despite all the savings available to be invested, companies are holding back. Some have grown so large and monopoly-like that they don’t need to invest in new projects to make profits.

That's Leonhardt for "monopolies are crushing the economy." How 'bout this one? This one's the howler:

Many young people have decided they’re happy living in small apartments, without cars.

Yep they decided that and now they're happy.

The crazy hermits over at Epsilon Theory are interesting because they're attempting to be investment consultants and they've pretty much decided that the only "alpha" (gains you make that the rest of the market doesn't - in other words, "your job as an investment consultant") left in the market is insider trading therefore it's time to howl from the mountaintops. I follow a few other guys who ostensibly make rich people richer for a living and they've basically thrown in the towel and are talking about how much to save for retirement and how shitty the scientific publishing system is and the like. But anyway one of the things the ET guys do is a zeitgeist check every week because they've basically decided that their quid subscription ought to earn its living so they're real big on the narrative machine.

And I gotta say. This looks a lot like someone trying to move the narrative away from AOC restating Marx or Elizabeth Warren calling for a breakup of Facebook, Amazon and Google.

Very interesting stuff. Tangentially related - I've always wondered how a currency with a half life would work, where the longer you sit on it the less it's worth. Would that be enough to keep currency in circulation, or would it just create an industry of individuals who just launder old money for new?

Nice to see you again, man!

"Half-life" is a useful way of thinking of inflation. I'm old and can remember when candy bars could be had at the grocery store for 40 cents. Now they're 85. The purchasing power of a dollar dropped by more than half there, at least as it relates to candy bars.

If you look at the CPI, a dollar in December 1989 has the same purchasing power as $2 in January 2019. That puts the "half life" of the American dollar at about nineteen years.

So. American money has a half-life in the same regime as strontium-90. Sit on it and it will be worthless. This is basically what drives investment - you put your money in a bank rather than under the mattress because the hope is that you make interest that at least keeps up with inflation. It never does, though. You have to put your money in bonds and stocks and real estate and capital projects for it to beat inflation which is the "engine that drives the economy" or some shit - investing, in a nutshell.

Things get into trouble if the risk of losing your money is greater than the gain of investing. Then everybody locks their money up in the bank because a guaranteed rate beats a high risk of loss. "locks their money up in a bank" is bad for "liquidity" - there's cash, but nobody can spend it. So you lower interest rates so that people are forced to invest their money. You create a disincentive for saving rather than an incentive for investing.

Right now, something like a third of the world's money is under negative interest rates - the banks charge you money to hang onto it. That's because the world's central banks can't provide enough disincentive to make you invest. It is economic crazytown and it's only numbness that doesn't have economists howling from the rooftops (they did a bunch when ZIRP and NIRP - Zero and Negative Interest Rate Policy respectively - came to town). In other words, the smart guys in the room are real close to the metal here; they're running out of reasons for you to not put your money under the mattress.

Because that "half-life" characteristic can be influenced. It's called the "rate of inflation." Central banks usually shoot for 3-6%. They don't hit it very often. But as you can see, if it's too high things go crazy. If it's too low things collapse.

A lot of my guys are linking to that horrible "turning japanese" video because they're 80s guys and they're scared to death of that "half life" reaching the point where money is no longer "radioactive."

"they're running out of reasons for you to not put your money under the mattress."

I feel this. I just had a bunch of stock vest in the company I work for and I want to sell it off because I don't want that many eggs in that basket, but I have no idea what to invest in. Everything just seems on its head crazy right now and I don't want to deal with the risk. The only thing I can think to do is put it towards the mortgage so that, if it comes to it, we could refinance and lower our payments.

I was was also going to ask here if everyone who was hot on ETH is still hot after the latest bubble, but that's not an investment as much as a novelty for me.

It doesn't help that our latest bot detector cannot show a difference between a human Reddit post and a SubredditSimulator post. the chatbots that control the stock market don't know that there are fundamentals that underly their trades. (1) they're bots, they don't "know" shit (2) that's not their training data. So we've got a probability fan between two extremes:

A. The market never crashes again because it no longer means anything economic. It means what the bots think it means.

B. As soon as enough factors go Minsky, the market will behave exactly like a 737-Max8 autopilot. After all, the Max8 Autopilot doesn't "know" it's attached to a plane full of aid workers. It only knows that when it sees variable X, it responds with control Y and if you keep it within the regime it knows, it performs flawlessly.

Cryptocurrency is not, in my opinion, a good investment. It's a good speculation. You shouldn't spend more than you can afford to lose because there are way too many x-factors controlling what's going to happen. That said, the impetus of cryptocurrency in the first place was removing money from the control of central banks; Bitcoin doesn't happen without Occupy Wall Street.

If your mortgage is young you get an outsized benefit from paying into it. When crypto was high I didn't do that because (A) I was slow (B) our financial planner treated me like shit (C) we're far enough along that it wouldn't have saved us that much money. But if you're just a few years into it? BOMB that fucker.

We're 3 years into the 30 year ARM with a credit union that adjusts every 5 years at a consistently reasonable rate (not max every time). Thanks to a few windfalls and moving from a real estate boomtown to a real estate mehtown, we've already managed to pay off about 1/5 of the mortgage, I just keep putting money into it. My 401k is stocked and has a steady flow, we have a stock portfolio, and I just can't think of a better way to diversify, so I guess house it is.

The bot thing is interesting. It gives me a lot to think about. I work for an ecommerce software company that makes a nifty bot for sellers. It looks at a product, finds that product for sales on amazon, and sells it for a penny less. This ensures our sellers are the ones that you're buying from. A lot of people use these pricing bots and they compete all the time to the benefit of the consumer. The problem comes not from the bots, but from the person that thinks they know what they're doing on setup. They forget to put a minimum, or to put in noncompete clauses with known "price cheats" and this will cause the market for that item to flash crash. It usually resolves itself quickly, but it costs the sellers a lot of money and, if they really bugger it up, it can put them out of business. It's kind of scary thinking the same basic premise is our economic underpinning.

ARMs scare me on principle, but I cannot make a rational argument that interest rates are going to be rising any time soon. I don't even really remember the '70s; really, I would say if it's working for you keep on keepin' on. I understand that ARMs are the norm in Canada.

If you have ready cash in the 401(k) and an interest in keeping things agile, I've been rolling over 90-day CDs. It allows me to make a little cash with zero risk while also saying "well I don't think I'll need to buy anything for three months, anyway" and then forgetting about it.

Your bot is on point. 85% of trades in the public market are bots... but we don't even know about the dark pools. 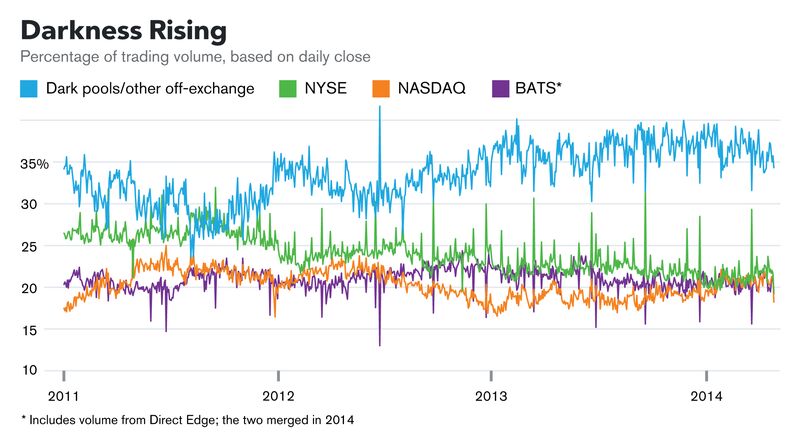 You know what calms people down? The Run Lola Run soundtrack. So let's use that to look at 500 milliseconds of dark pool trading... in a single stock... in a single dark pool... in 2011.

Rhetorical question: what real world information could they act on if they had the ability? Those are bots making three and four bid/ask combos per millisecond. How much do you think the inherent value of any given equity changes in 0.001s?