There is so much to excerpt. Yet it all deserves excerpting.

Tons on journalists on Twitter ripping Wolff's work apart with things like, "A 500 word quote from a conversation between Bannon and Ailes? Get real." "Wow, everyone is quick to believe a known bullshitter when it's politically convenient." And so on. Not sure what to make of all that. I don't know much of anything about Wolff, but it would seem pretty goddam irresponsible to just make shit up to sell books (yes, I get the irony that that's what Art of the Deal is). I have to believe that the majority of this is solid, because it fits so damn well with just about everything that's known about Trump. It's not exactly out of left field, even if Trump comes off as possibly even dumber than we imagine him to be. Everyone thought Trump was just doing a media tour. It's not really far fetched to talk to people close to him who now admit the same thing, even if some of the details are not verbatim.

Tons on journalists on Twitter ripping Wolff's work apart with things like, "A 500 word quote from a conversation between Bannon and Ailes? Get real." "Wow, everyone is quick to believe a known bullshitter when it's politically convenient."

They lack vision. That's okay, they're journalists evaluating the work as a piece of journalism.

It's so much more than that.

That year, he also wrote a biography of Rupert Murdoch, The Man Who Owns the News, based on more than 50 hours of conversation with Murdoch, and extensive access to his business associates and his family.

In the 1990s, Bannon ventured into the entertainment and media industry. He became an executive producer in the Hollywood film and media industry. Bannon produced 18 films, from the 1991 Sean Penn drama The Indian Runner to Julie Taymor's 1999 film Titus. Bannon became a partner with entertainment industry executive Jeff Kwatinetz at film and television management company The Firm, Inc. 2002–2003.

In 2004, Bannon made a documentary about Ronald Reagan titled In the Face of Evil. Through the making and screening of this film, Bannon was introduced to Reagan's War author Peter Schweizer and publisher Andrew Breitbart, who would later describe him as the Leni Riefenstahl of the Tea Party movement.

This isn't a news story, this is a narrative.

In a 2004 cover story for The New Republic, Michelle Cottle wrote that Wolff was "uninterested in the working press," preferring to focus on "the power players—the moguls" and was "fixated on culture, style, buzz, and money, money, money." She also noted that "the scenes in his columns aren’t recreated so much as created—springing from Wolff’s imagination rather than from actual knowledge of events." Calling his writing "a whirlwind of flourishes and tangents and asides that often stray so far from the central point that you begin to wonder whether there is a central point."

Bannon added: “You never see it, you never know it, because you don’t need to … But that’s the brain trust that they had.”

Bannon also speculated that Trump Jr had involved his father in the meeting. “The chance that Don Jr did not walk these jumos up to his father’s office on the twenty-sixth floor is zero.”

The Columbia Journalism Review criticized Wolff in 2010 when he suggested that The New York Times was aggressively covering the breaking News International phone hacking scandal as a way of attacking News Corporation chairman Rupert Murdoch.

This is Steve Bannon and Rupert Murdoch controlling the narrative. We've been looking for a sign where the establishment Republicans say "okay, enough's enough, out of the pool" and my estimation is this is Rupert Murdoch's play.

Murdoch suggested that taking a liberal approach to H-1B visas, which open America’s doors to select immigrants, might be hard to square with his promises to build a wall and close the borders. But Trump seemed unconcerned, assuring Murdoch, “We’ll figure it out.”

“What a fucking idiot,” said Murdoch, shrugging, as he got off the phone.

This could very well be the Brutus moment. Rather than anklebiting and nipping at the heels, this might signal the beginning of the feeding frenzy.

Did you see the Fusion GPS NYTimes op-ed? I thought about submitting it here, but I’m at my limit for today. And that means it was a pretty good day.

Badged because read this fuckers..

"Wow, everyone is quick to believe a known bullshitter when it's politically convenient."

I'm a political hack who doesn't know he's being echochambered with words like that. What can I be told for my view to change?

In the West, at least, there's always been this idea of the fourth estate - that the gentry, the clergy and the commoners all have their wants and desires but the press - be they town criers or Matt Drudge - are their own independent force of good that keeps things fair between all parties. In the modern US, the "fourth estate" is "journalism" while the other three are the executive (president), legislative (congress) and judicial.

Buuuuuut it's never really been accurate. Thomas Paine's Common Sense was journalism, but it was also propaganda for revolution. Joseph Pulitzer (of the prize) and William Randolph Hearst pretty much owned journalism in the 19th century and effectively caused the Spanish American War.

The Iraq War was, in many ways, advanced by the New York Times. Vice President Dick Cheney told his chief of staff Scooter Libby to give Judith Miller, a reporter, totally fabricated information about uranium. Miller ran with it - as did lots of reporters with other facts because if you don't print what they tell you, you lose "access."

The media loves to pretend it's impartial. It almost never is. If the media is principled, then at least they're accurate. The Daily Show quipped "The facts have a well-known liberal bias" fifteen or so years ago and you can empirically demonstrate that editorial pages generally skew conservative despite major news-gathering outlets finding and establishing facts that tend to reinforce a more progressive picture of the world.

But the more political the news, the more politicized it will be. This is inside baseball on the most outsider administration in history and the players got to where they were by manipulating the narrative.

On Friday, January 27 — only his eighth day in office — Trump signed an executive order issuing a sweeping exclusion of many Muslims from the United States. In his mania to seize the day, with almost no one in the federal government having seen it or even been aware of it, Bannon had succeeded in pushing through an executive order that overhauled U.S. immigration policy while bypassing the very agencies and personnel responsible for enforcing it.

The result was an emotional outpouring of horror and indignation from liberal media, terror in immigrant communities, tumultuous protests at major airports, confusion throughout the government, and, in the White House, an inundation of opprobrium from friends and family. What have you done? You have to undo this! You’re finished before you even start! But Bannon was satisfied. He could not have hoped to draw a more vivid line between Trump’s America and that of liberals. Almost the entire White House staff demanded to know: Why did we do this on a Friday, when it would hit the airports hardest and bring out the most protesters?

“Errr … that’s why,” said Bannon. “So the snowflakes would show up at the airports and riot.” That was the way to crush the liberals: Make them crazy and drag them to the left.

What we have here is Steve Bannon, a right-wing media manipulator, being quoted by Rupert Murdoch's biographer, being excerpted in The Guardian and The Hollywood Reporter. At a bare minimum, it's an indication that aspects of the conservative media are breaking from the Trump Administration. There's nothing straightforward to any of this and the people crying "bias" are absolutely right.

But you can always cry "bias." Interestingly enough, the Trump Administration is suing Bannon but not for slander or libel, but for violating a confidentiality agreement. And they're using the same lawyer that sued the bejeesus out of The Daily Mail for claiming Melania Trump was a prostitute. 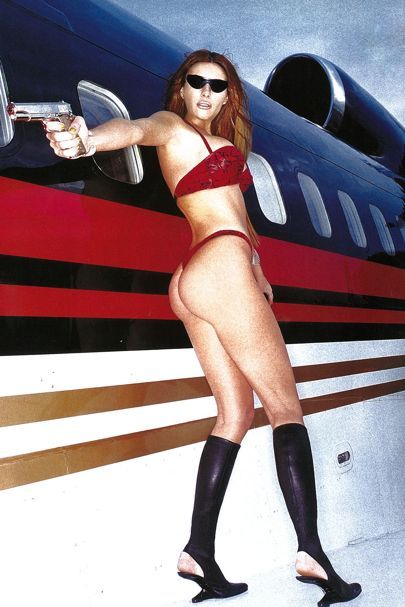 So. However batshit the allegations in Wolff's book, the Trump legal team thinks they toe closer to the truth than arguing the woman above traded sex for money.

Go ahead and try to find someone without an agenda in this landfill inferno. I would argue it's impossible.