Hey hubski, that idiot from a year ago is back, and this time in an election cycle.

To cure all our hype for this cycle (or at least mine) I'll be trying to post a weekly debate topic (if you guys cooperate), so, here we go

How should we be taxed?

GOP tea partiers have suggested the adoption of a flat tax in the earlier debate, with Rand Paul suggesting a radical 14.75% flat tax on everything, and even more establishment canidates, such as Jeb Bush and Donald Trump, have suggested a more progressive tax system, but not without huge cuts

Meanwhile, on the other side, self described socialist Bernie Sanders supposedly said he wanted to raise the tax bracket for the very wealthiest to a whopping 90%

So, which is the best?

The poverty line in the US is about $24k, I think. I would be fine with a flat tax of 5% below the poverty line (everyone should have skin in the game) and an additional 1% for every 1K earned up to 20% total, which would be reached at roughly $40k. The natural response from opponents is to say that its not fair because someone at $40k will have to pay $8,000 which has a greater impact than someone at $200k having to pay $40k. To that I say, "that person paying $40k payed 5 times more to the government to keep our country running. Also, $40k is a lot, even if you are still taking home $160k.

People that want to excessively tax the wealthy should try and start a business one day. It's hard. VERY, VERY hard. Most people toil away at it for many years before they're successful. Then, if they're lucky they progressively climb the income ladder. Eventually, after missing out on years of life to build a business/service that presumably has value for society, you want to tax them at 90%? That's just crazy.

Flat tax. It's fair. The wealthy will pay more than they are right now and its unambiguous.

Edit: Was just reading an article with this breakdown of GOP candidates proposed tax: 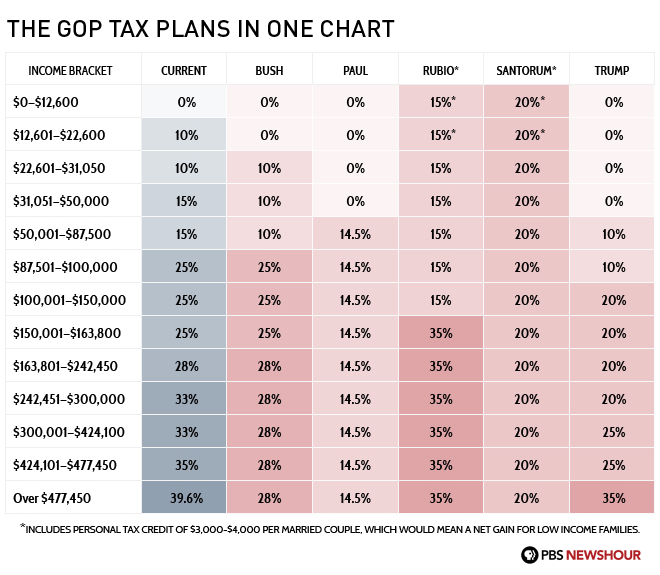 People that want to excessively tax the wealthy should try and start a business one day. It's hard. VERY, VERY hard. Most people toil away at it for many years before they're successful.

"since it is hard work they deserve their money" is not an argument for no taxes on businesses.

Look at this graph;

Taxes need to go up, as does minimum wage. Revenue is too high for businesses, and that revenue, money going to shareholders, is not going into the hands of those who earned that money with their work.

And, yes, it may just end up to be a few cents per worker once we adjust things. Doesn't mean that won't have significant effects on the economy.

Eventually, after missing out on years of life to build a business/service that presumably has value for society, you want to tax them at 90%? That's just crazy.

When you are making billions of dollars, living on a fucking yacht, making more money per second through investments than people who are working 10 hours a day, you better damned well be paying 90% of that income above the first couple of thousand to the society that let you build that business in the first place.

I'm not saying people making this sort of money didn't earn it, and I don't support the idea of a system that tries to prevent inequality entirely. The wealthy are wealthy because they made good decisions, we should reward this.

We live in a society where there are just a few people who own the vast majority of wealth. I don't frankly give a shit who earned it.

Flat tax. It's fair. The wealthy will pay more than they are right now

Secondly, the wealthy don't pay shit for taxes, because of how many loopholes there are. We aren't going to be able to get more than 5% out of them until we stop letting them shovel money into the banks of other nations and abuse the tax system to have a bigger number in their accounts.

Fair doesn't exist. Deserve, earned, made, they don't exist. You deal with the situation, and you live with it. If what is best is to have a 90% tax on the wealthy, if that leads to the most productive, most efficient, cleanest running, society with the largest number of happy, well rounded, decent people in it, that's the path we should take.

Is your argument that corporations make too much profit, so they should be taxed more just to take money out of their pocket to "even the playing field"

My argument is that corporation are making larger and larger profits due to the factors in the economy, low minimum wage, low taxes, higher and better automation, are allowing them to get more work out of people for less pay, leading to lower costs to sell things.

As a result, the economy needs to be restructured to account for, and counteract this trend.

So your saying that corporations thriving is bad for the economy???

If the corporations are doing well, then America does well

corporations thriving is bad for the economy

Profits in a perfect competition would be 0, or near it, since no company could charge more than what a product costs to make without being undercut by another company. That would be best for the economy.

High demand for services from a corporation, and the corporation required to hire to meet that demand == more jobs. High profits is just money going into stockholders bank accounts, meaningless to anyone but those already with money.

If the corporations are doing well, then America does well

All depends on how you measure "well".

I would get behind these plans a lot more if any of the candidates proposed eliminating the payroll tax. It is highly regressive, and anything but good for the economy. All those "47%" still pay high percentage of their income in payroll tax (12.4%). I find it unconscionable.

I was kinda surprised to see that Trump seems to have the most progressive tax bracketing on the list, but then his numbers would mean the US brings in loads less tax revenue than currently. Total fantasy.

But that's the problem with a lot of these proposed tax plans. Would they balance the budget? Forget what's "fair," is it economically sensible? I'm sure there's also a lot to be said about pushing a greater burden on the bottom of the pyramid and choking economic growth, but I'm no economist. The thing is if we base this on what people think they "deserve" to pay themselves, aren't we creating a prisoner's dilemma?

Flat with no loopholes.

Have a good time enforcing that.

Have a good time enforcing that.

That's why we have an IRS. If they don't exist, they're against the law. Good luck finding a CPA/Audit firm willing to break the law to save you money, not going to happen. Where there is ambiguity, there is opportunity. When there is no ambiguity, there is illegality.
+discuss
+discuss
–5
user-inactivated  ·  2029 days ago  ·  link  ·

Those loopholes are how we get people and organizations to do things though. Americans get pissy if you tell us what to do, so unless it's something dire it's better to offer an incentive than to make demands. Tax breaks are an easy incentive to offer.

Let's separate loopholes from incentives. Best example: even though there is "incentive" to stow your wealth in an offshore account, I'd like to call that a loophole.

I guess by loopholes, I mean straight up tax evasion. And I'm under the impression that there's a LOT of that going on, but I don't know that anyone has accurately quantified just how much.

Anyway, this isn't in the realm of things that I get payed to know, so I'm pretty lacking in concept. Feel free to school me :).

Storing your money in an offshore account isn't a loophole, it's just a thing you do to keep the IRS from calling you on it when you don't mention all the money you have.

I'll rephrase my campaigning as "anti-tax evasion" and keep loopholes synonymous with incentives.

If only we had more taxes to better fund the IRS, so they could crack down on evaders. Self-defeating.

If they don't exist, they're against the law.

^ Edit: I guess you're saying that if loopholes didn't exist, they'd be illegal. OK?

Also not sure if you're implying you'd like to reform the relevant legislation or not.

And how are we going to finance a massive overhaul of tax laws that benefit individuals more than corporations? (Do we really want that, or should we try to strike a balance?)

Put in parenthesis because it's obviously not that simple. One man's idea of a balance is another man's landslide.