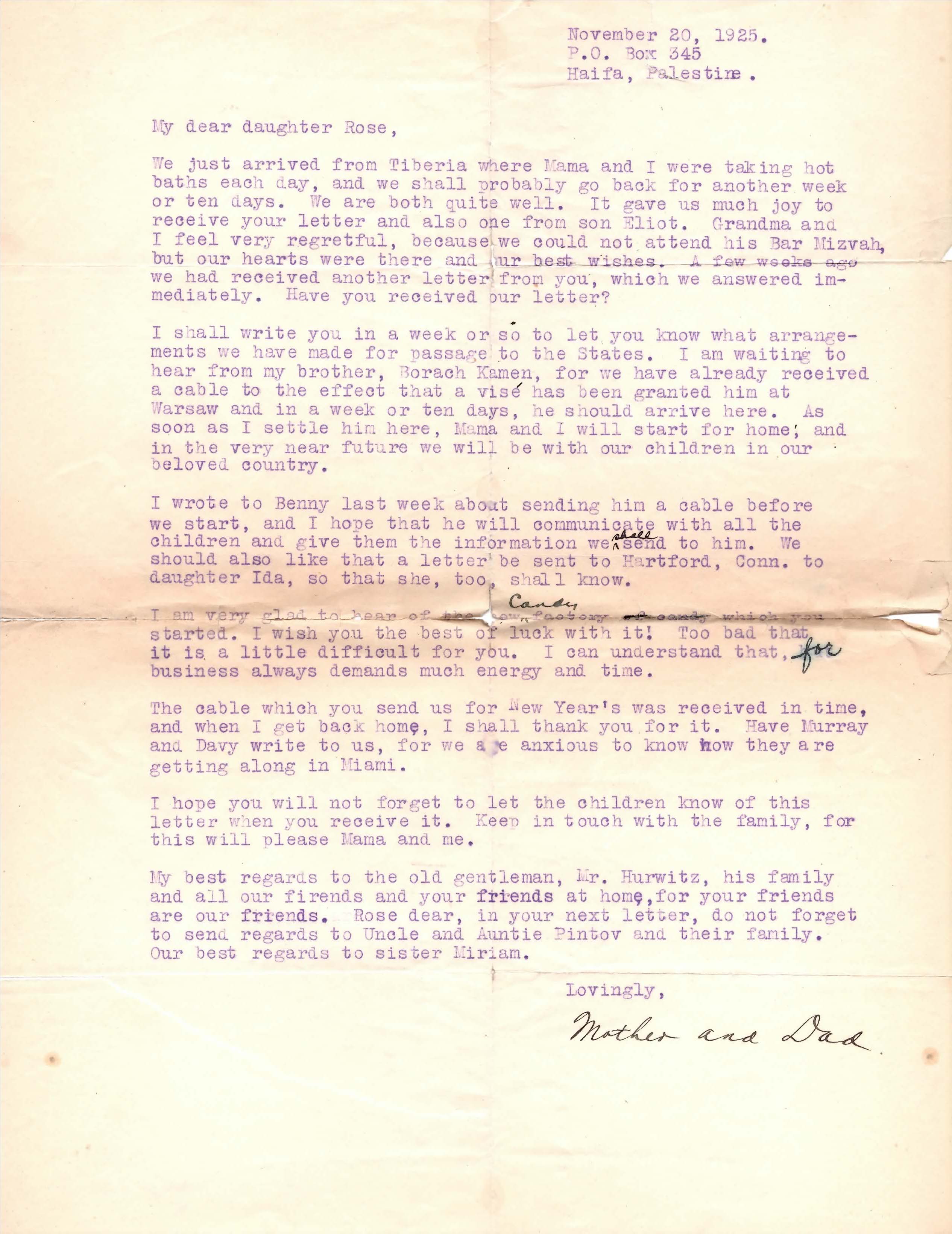 We just arrived from Tiberia where Mama and I were taking hot baths each day, and we shall probably go back for another week or ten days. We are both quite well. It gave us much joy to receive your letter and also one from son Elliot. Grandma and I feel very regretful, because we could not attend his Bar Mizvah, but our hearts were there and our best wishes. A few weeks ago we had received another letter from you, which we answered im-mediately. Have you received our letter?

I shall write you in a week or so to let you know what arrange-ments we have made for passage to the States. I am waiting to hear from my brother, Borach Kamen, for we have already received a cable to the effect that a visa has been granted him at Warsaw and in a week or ten days, he should arrive here. As soon as I settle him here, Mama and i will start for home; and in the very near future we will be with our children in our beloved country.

I wrote to Benny last week about sending him a cable before we start, and I hope that he will communicate with all the children and give them the information we shall send to him. We should also like that a letter be sent to Hartford, Conn. to daughter Ida, so that she, too, shall know.

I am very glad to hear of the candy factory which you started. I wish you the best o luck with it! Too bad it is. a little difficult for you. I can understand that, for business always demands much energy and time.

The cable which you send us for New Year's was received In time, and when I get back home, I shall thank you for it. Have Murray and. Davy write to us, for we are anxious to know how they are getting along in Miami.

I hope you will not forget to let the children know of this letter then you receive it. Keep in touch with the family, for this will please Mama and me.

This is still too new and larval but long story short it became clear to me that the fundamental schism at the heart of my personal being is two generations back, when my bipolar grandfather at Harvard fell in love with a Jewish girl at Radcliffe. There's been a lot of nonsense and obfuscation around it but a family letter from a woman I've never met (but moved to Paris and is a big fan of Marine LePen) leads me to believe that the inherited knowledge is incorrect.

The story we were always told is that my Jewish grandmother got her daughter and her goyim boyfriend kicked out of Harvard for fooling around to keep her from marrying outside the faith. The facts on the ground, based on what's publicly available on Ancestry.com and in the three albums I salvaged of my grandmother (and the one of my great-grandmother), indicate that my grandfather's family threatened to cut him off if he kept dating the Jew and when he married her instead, they stopped paying tuition. His senior year. He was an honors student. She was phi beta kappa. And she left to start a grand new adventure with her exciting new husband, having never seen what bipolar people are like when they're down. They passed it on to three of their four kids, one of whom sucked a tailpipe on December 28 of his Freshman year at Harvard, having won a scholarship to Dartmouth, a scholarship to Princeton, and having gone to Harvard anyway because holy shit the weight on that poor kid's shoulders.

I have one of his last letters. Dude was clearly manic, and when manic, crazier than my mother, which is saying something. Tucked into the envelope is a single-spaced Unabomber-grade screed from my mother to her parents, fifteen years later. An earlier letter from my dead uncle as a kid is in an envelope with a contemporaneous letter from her husband, still sealed and unopened.

There's a lot to unpack here, and I'm still processing.

There's a legend I've heard of great great grandpa "Mordechai Horowitz" who was a jeweler in Moscow who fled the pogroms for New York, where he opened a greengrocer because at least you can eat the stock if you go bankrupt.

In this country, at least, he went by Joseph Shoolman. And apparently he and his wife loved Tiberias.